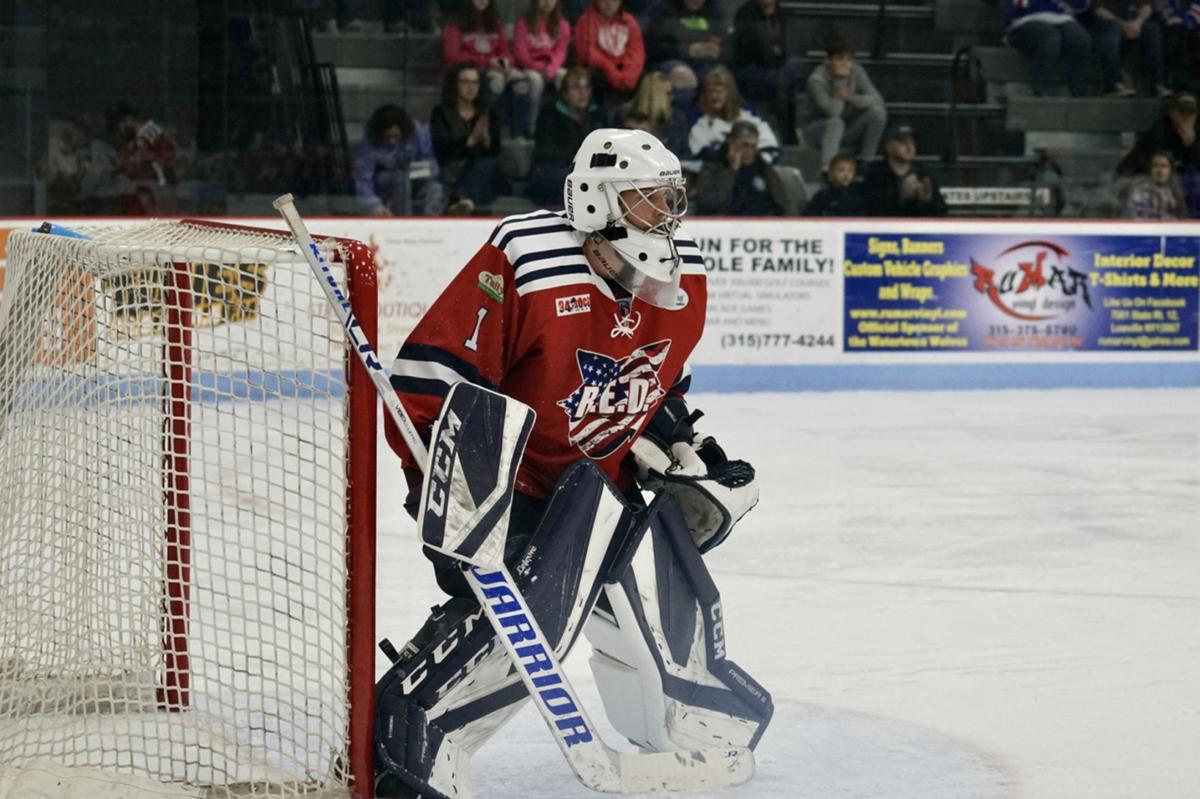 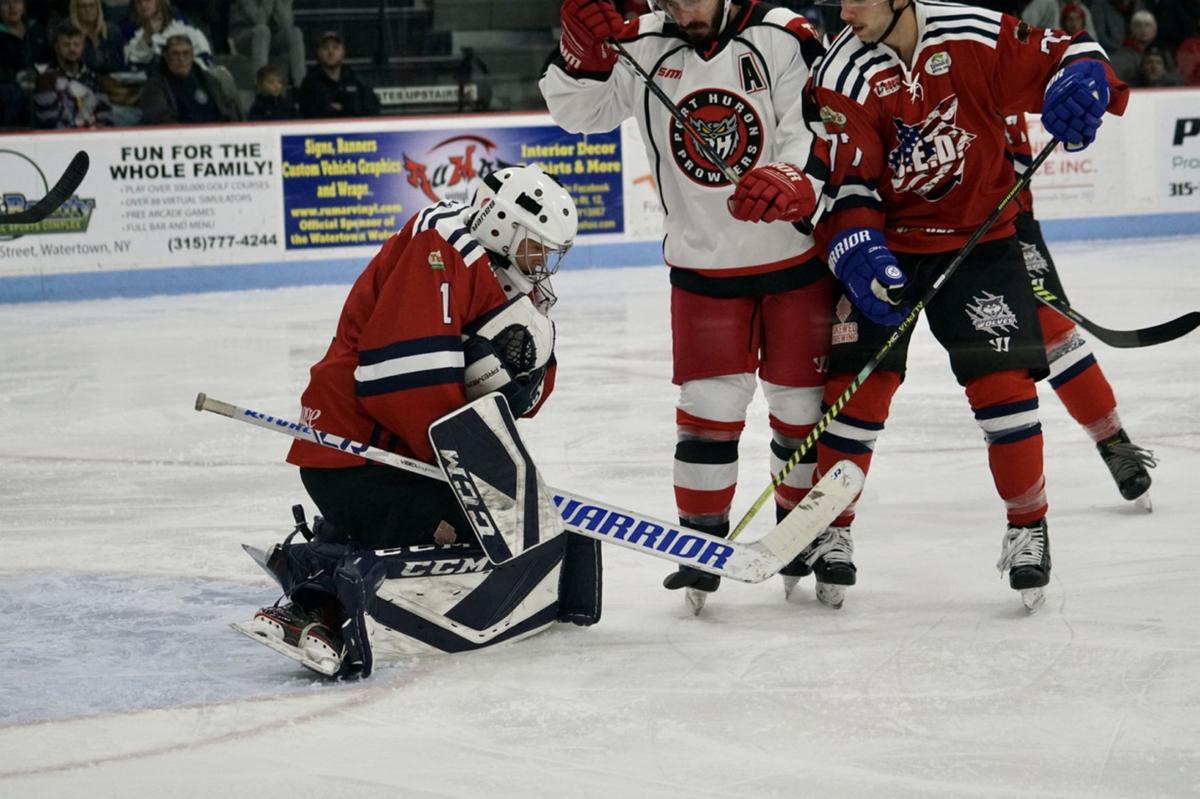 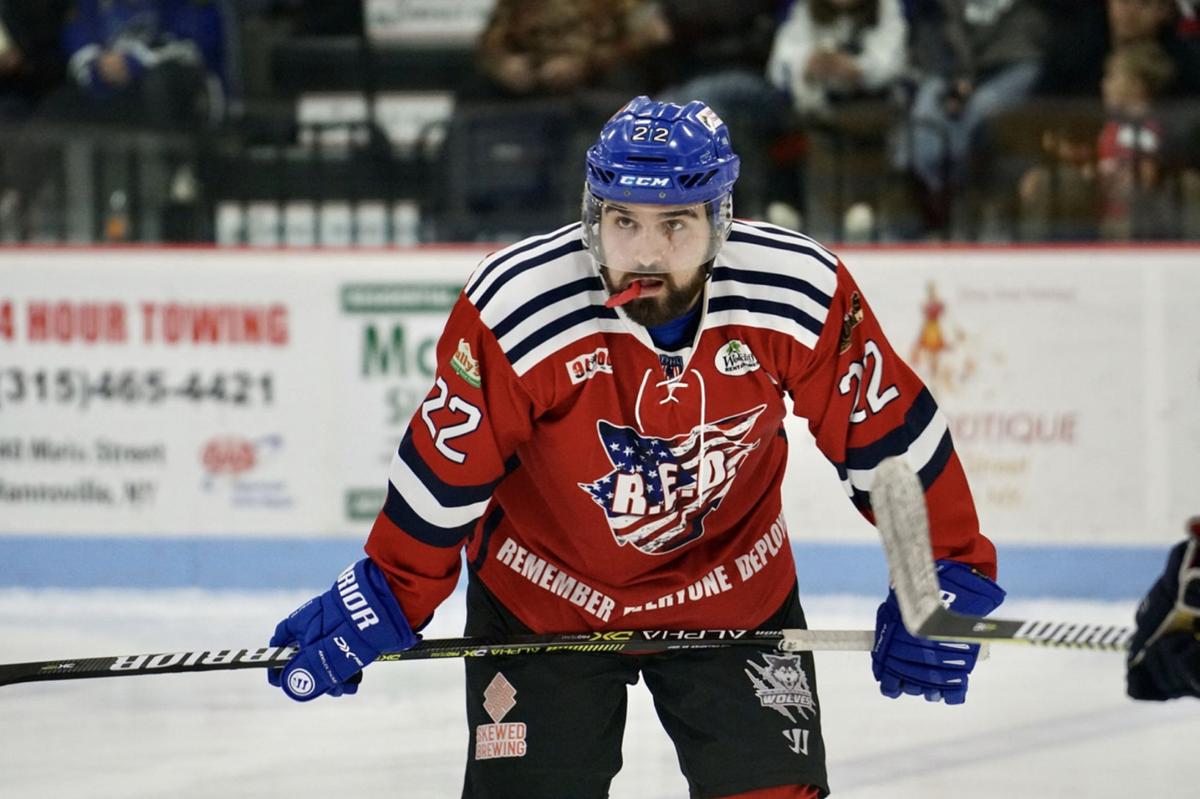 WATERTOWN — Rookie goalie Jeremy Pominville appears to have found a home with the Watertown Wolves.

Just nine games into their Federal Hockey League season, the Wolves are off to a near historic start at 8-1 and riding an eight-game winning streak.

Pominville is a big part of the early-season success as he’s won six of the games, including three wins on Watertown’s recent five-game road swing.

“Personally, it’s been pretty good,” Pominville said. “I’m just trying to keep things simple for me and that seems to be working right now for me. So I’m not going to change anything.”

The league-leading Wolves and Pominville will open a four-game homestand when they face the Danville Dashers at 7:30 p.m. today and Saturday at Watertown Municipal Arena.

Pominville, who is 6-1 this season, recorded a personal milestone as he recorded his first career shutout in Watertown’s 5-0 win over Battle Creek last Saturday. After making 30 saves the night before in a 5-2 win, also at Battle Creek, he stopped all 22 shots he faced to post the shutout.

“Exactly, it was nice,” Pominville said. “Things are going my way right now, so hopefully it just keeps going like that. But the guys make it easy for me, too, we have a good team here.”

The previous weekend, Pominville made a career-high 46 saves in a 3-2 victory at Danville on Nov. 8.

“Jeremy, his background is pretty good,” Watertown coach Paul MacLean said. “I think he brings a lot of good experience from when he played in juniors and in college.”

So far this season, Pominville has registered a .950 save percentage and 1.86 goals-against average, which rank first and second in the league, respectively.

“I love it so far,” said Pominville, a native of Mattice, Ontario. “I have nothing bad to say, everything’s been positive. So hopefully it keeps going with that trend and we’ll have a great year.”

Also for Watertown, rookie goalie Blake Scott has won both of his starts this season, including a 33-save effort in a 9-2 win over Battle Creek on Sunday, to complete a three-game weekend sweep of the Rumble Bees.

That weekend, Scott and Pominville combined to stop 107 of 112 shots faced for the Wolves in the two wins against the Dashers.

“Jeremy’s done really well and actually, so has Scott,” MacLean said. “Jeremy played in our first five games and Scott played really in the second game against Danville, he made some pretty good stops and we were down to three (defensemen) in the third period.”

Both goalies will get a start this week against Danville, according to MacLean.

Watertown’s showing to begin this season is the franchise’s best since the team won 10 of its first 11 games in the 2014-15 campaign, its first in the league. The Wolves went on to win the league championship that season.

“Absolutely, every game we seem to get better and we’re working hard,” Tyler Gjurich said of this season’s start. “We have that winning confidence in the locker room, so it’s good.”

The team’s longest winning streak last year was seven games, which was part of a stretch in which Watertown won eight of nine games to close out the regular season.

“The big thing is that it’s great to have success,” MacLean said. “But things can change so quickly, that you have to kind of take it one week at a time. But there’s no question that we’re happy with our start.”

While the Wolves continue to excel defensively, as they’ve allowed only 18 goals in nine games, they continue to heat up offensively as well.

Watertown has generated 43 goals, for an average of nearly five goals a game (4.8), thus far this season.

Leading the way are forwards Tyler Gjurich and Deric Boudreau, who rank 1-2 on the team in scoring.

Gjurich, a winger, and Boudreau, a centerman, continue to skate on the same line, with Gjurich leading the team in goals (11) and points (18).

“All three lines, every line does their job,” said Gjurich, who also leads the league in power-play goals (six). “We have a couple lines that can put the puck in the net and we’re also strong defensively. As a team, we’re playing with a lot of confidence.”

Boudreau, who has generated a nine-game point streak to start the season, stands second on the team in goals (10) and points (17).

“He’s awesome,” Gjurich said of Boudreau, who leads the circuit in game-winning goals (four). “All summer I was pushing to make sure he would get back here because he’s so fun to play with. He makes me and our line that much better.”

“He’s a really good two-way player,” MacLean said of Boudreau. “He’s the kind of player that I’ve always said can step up to the next level.”

Linemate Lane King ranks third on the team in points (15) and is tied for the league lead for assists (13) with defenseman and teammate Kyle Powell.

The Wolves will play at home for the first time in three weeks, where they won three of their first four games to open the season.

That included two wins against Port Huron and one against Mentor after Watertown lost its season opener to the Ice Breakers.

After the two games against Danville, the Wolves will host expansion Delaware next Friday and Saturday.

“Everything is clicking,” Gjurich said. “A quick start like this is fun and we’re home for the next four games. So hopefully we can keep it rolling.”

“We won all three games,” Pominville said of last week. “So a road trip can kind of get tough after the first two, but we were able to pull through in Sunday’s game as well.”

“Everyone’s clicking together and gelling,” Pominville said. “And we’ve been on a roll, so everything is just going our way right now. So we have the potential to be a good team.”