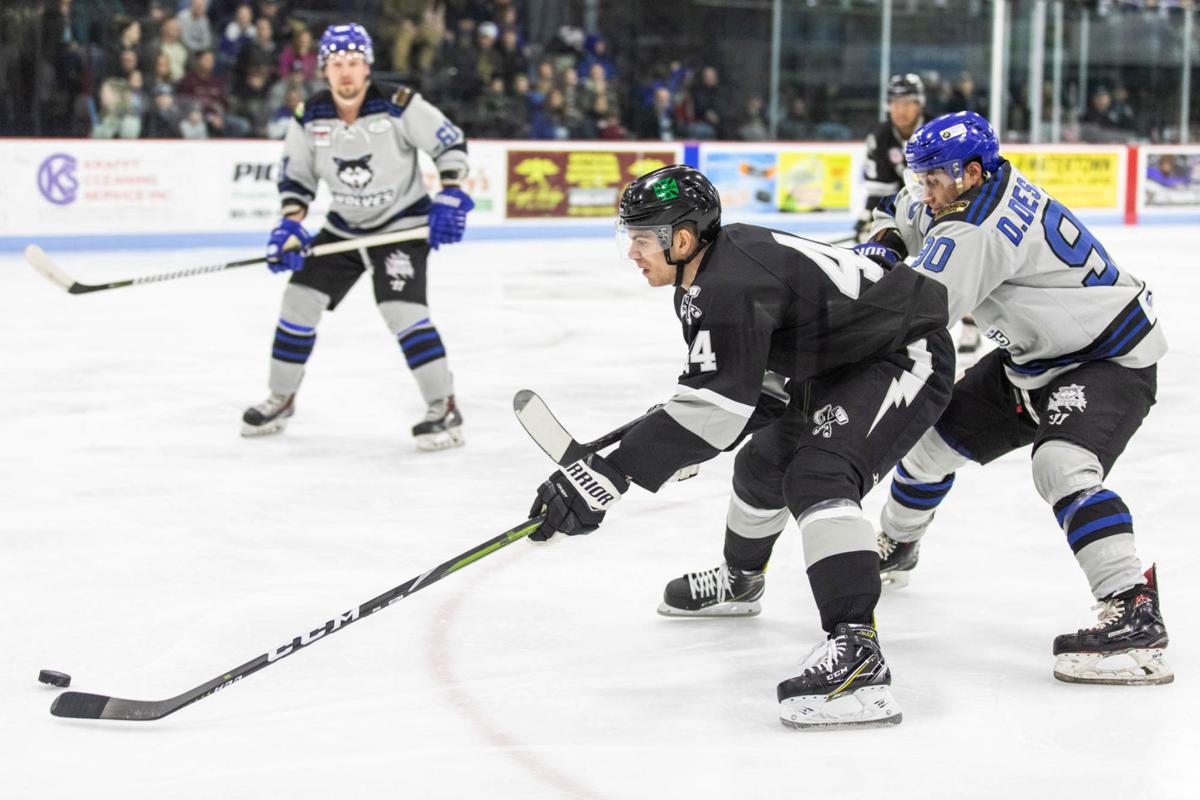 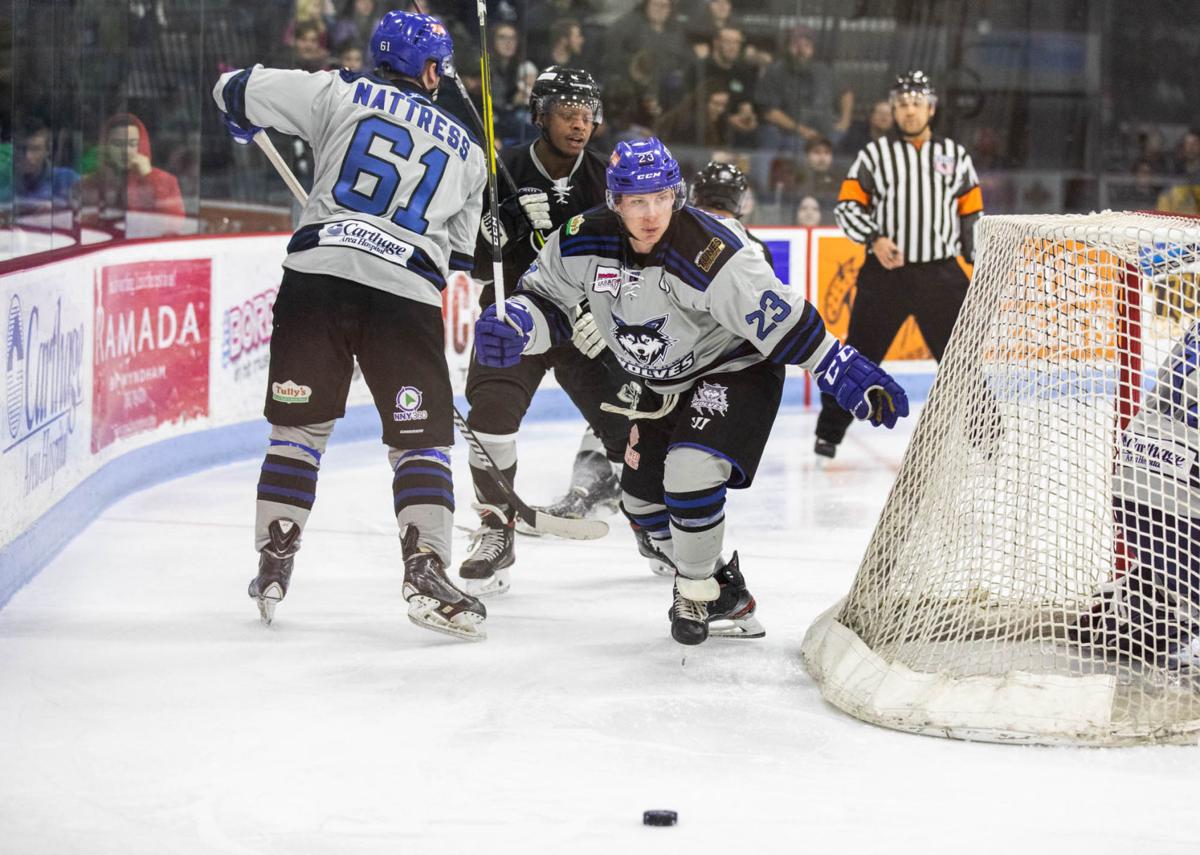 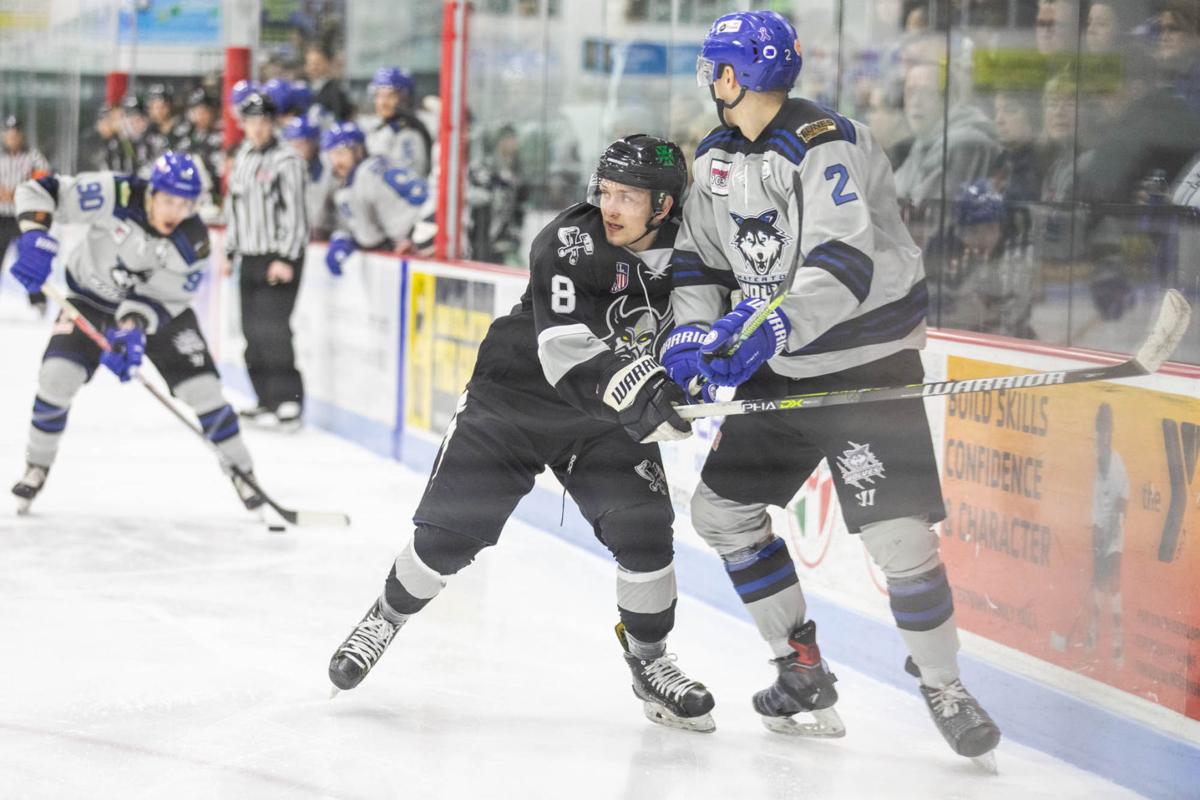 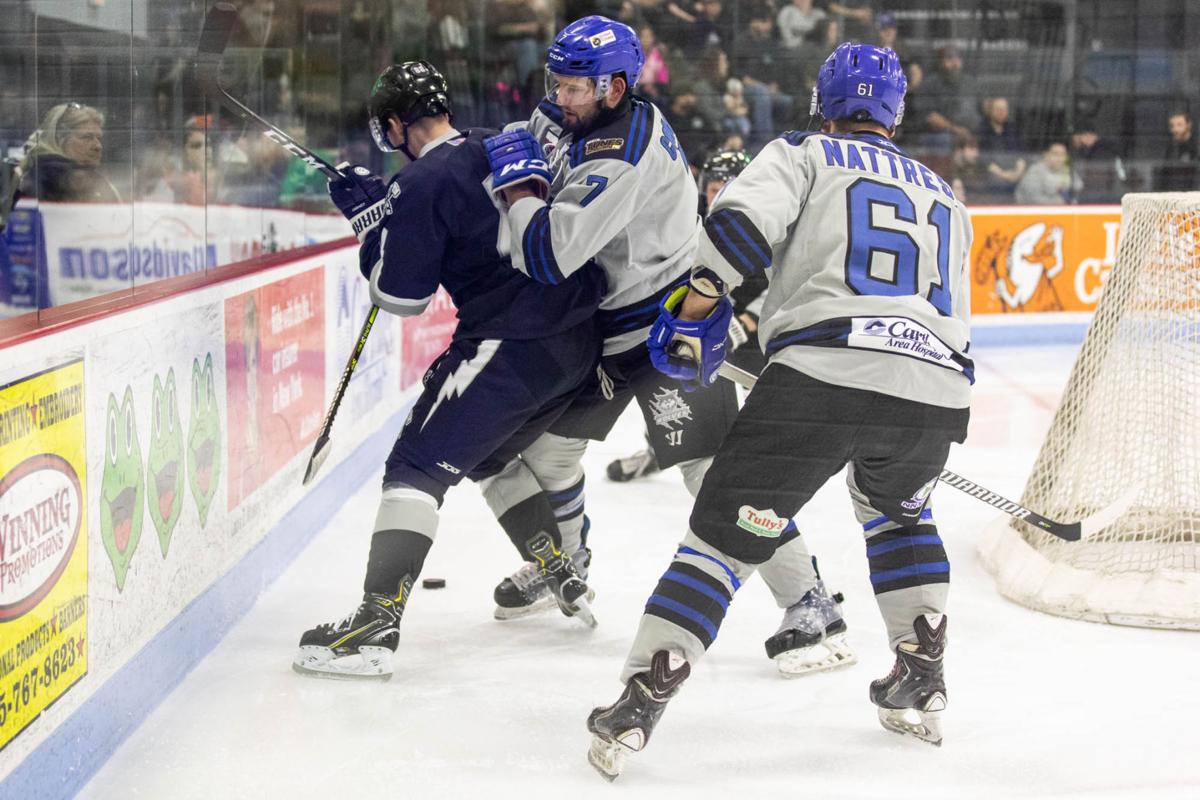 Watertown Wolves players wrestle with a Delaware Thunder player for the puck behind the Wolves’ goal during a recent game at the Watertown Municipal Arena. Sydney Schaefer/Watertown Daily Times 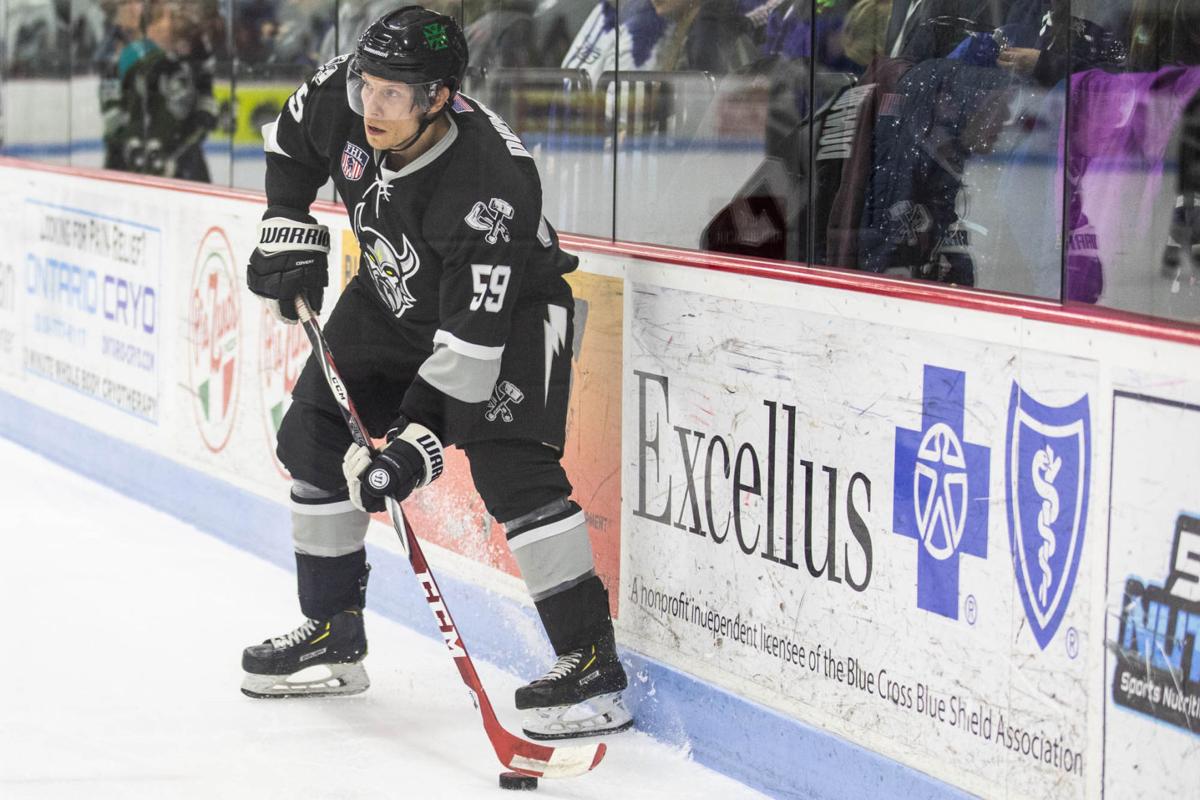 Delaware’s Brian Dunford surveys the rink before passing the puck to a teammate during Saturday night’s game against the Watertown Wolves at the Watertown Municipal Arena. Sydney Schaefer/Watertown Daily Times 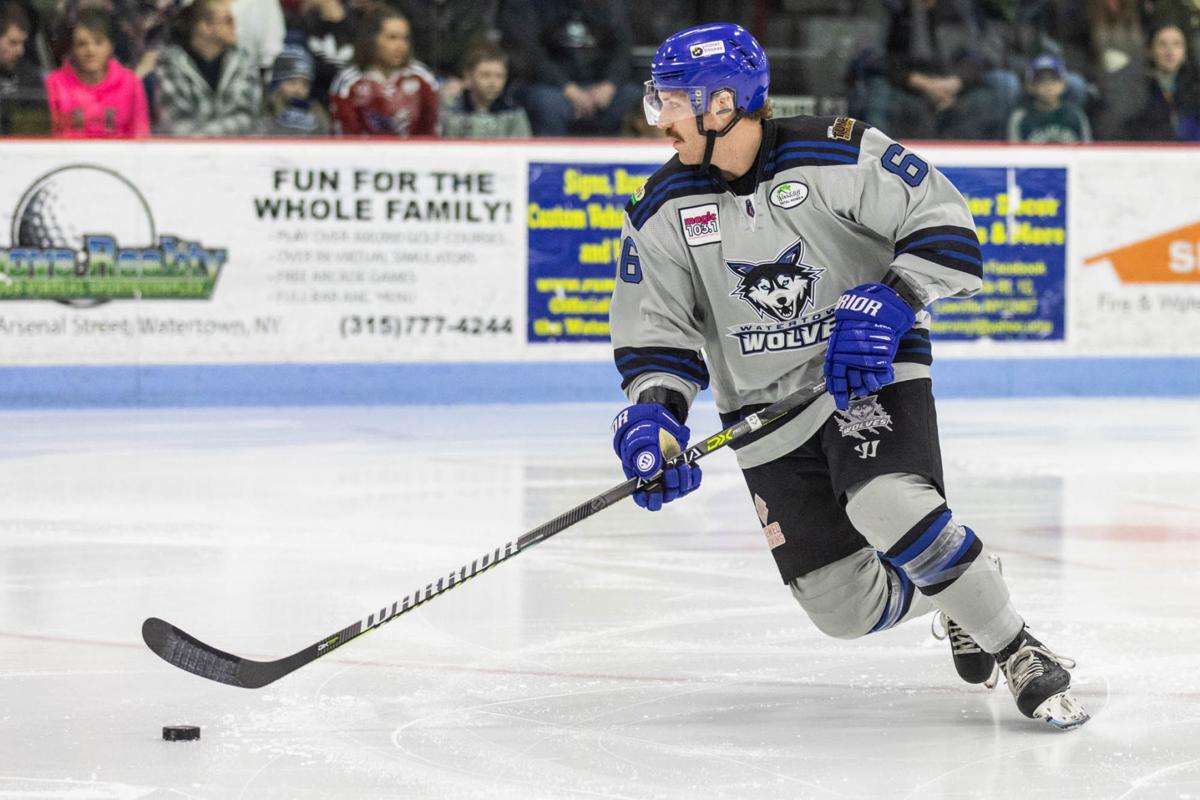 Watertown’s Cole Sonstebo moves the puck up the rink during Saturday night’s game against the Delaware Thunder at the Watertown Municipal Arena. Sydney Schaefer/Watertown Daily Times 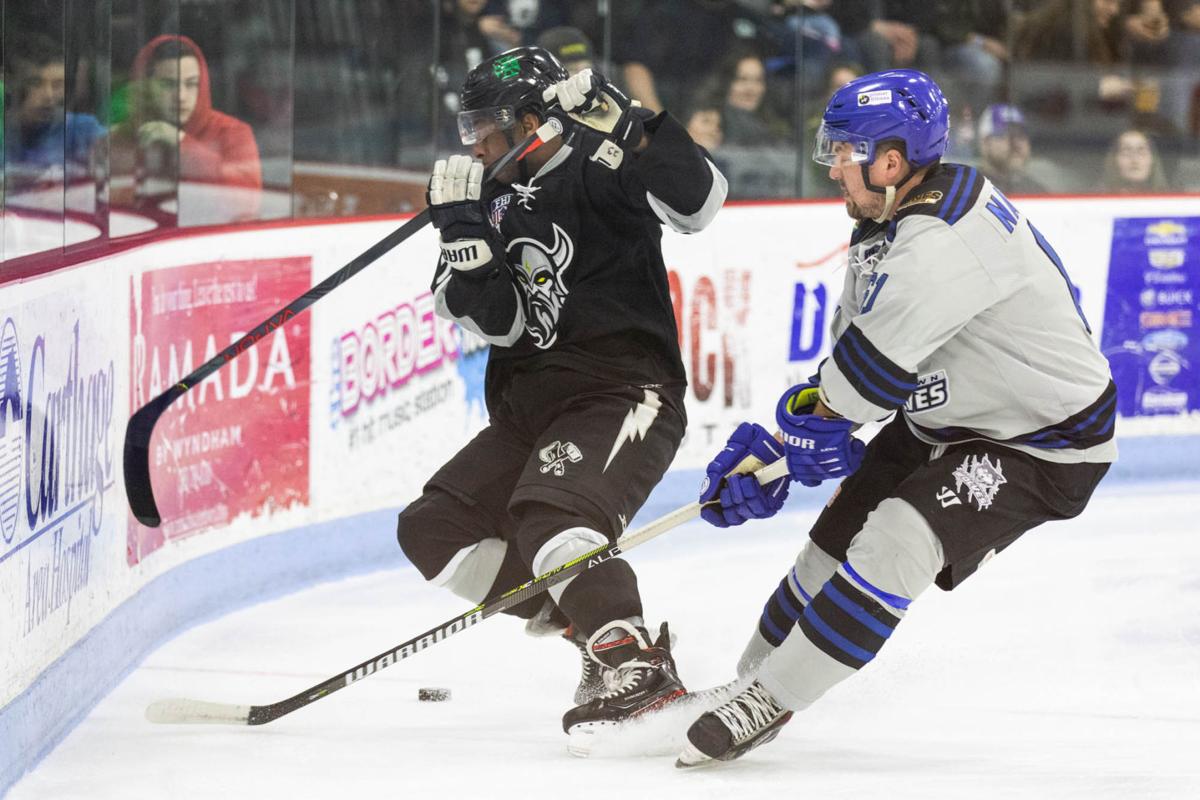 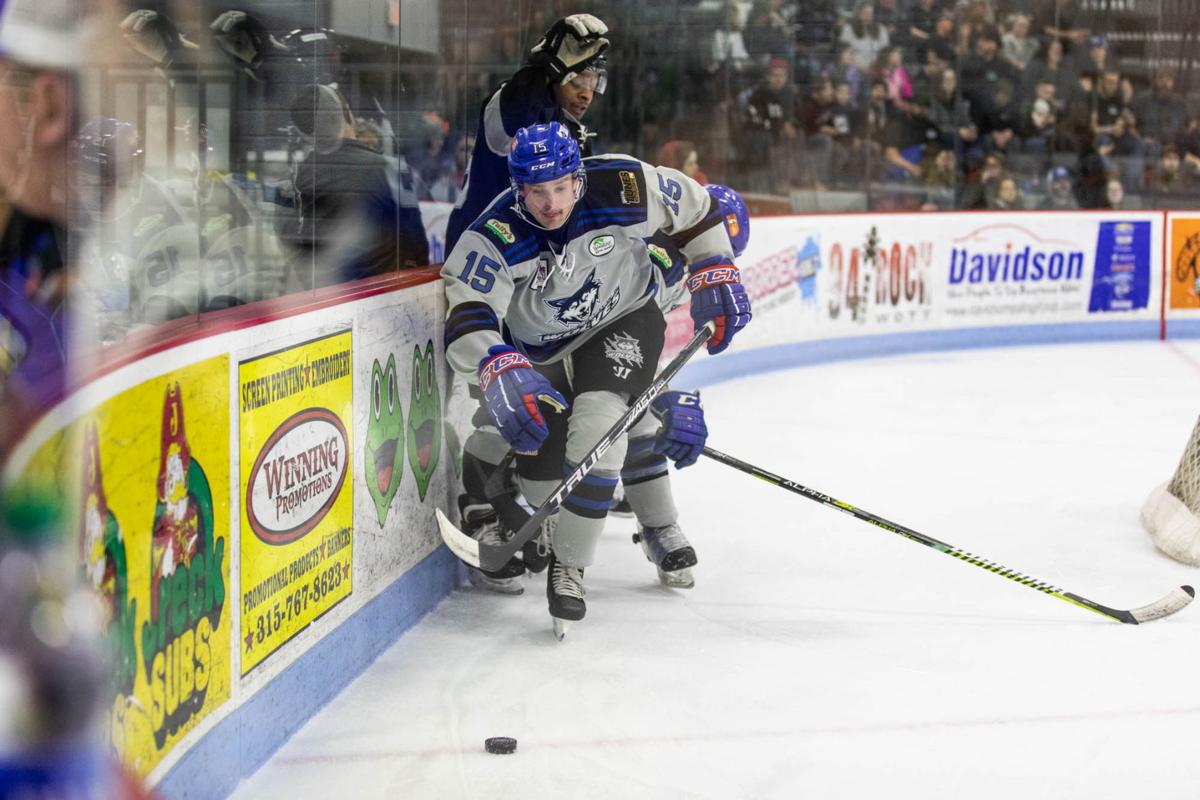 Watertown Wolves players wrestle with a Delaware Thunder player for the puck behind the Wolves’ goal during a recent game at the Watertown Municipal Arena. Sydney Schaefer/Watertown Daily Times

Delaware’s Brian Dunford surveys the rink before passing the puck to a teammate during Saturday night’s game against the Watertown Wolves at the Watertown Municipal Arena. Sydney Schaefer/Watertown Daily Times

Watertown’s Cole Sonstebo moves the puck up the rink during Saturday night’s game against the Delaware Thunder at the Watertown Municipal Arena. Sydney Schaefer/Watertown Daily Times

WATERTOWN — Deric Boudreau and his Watertown Wolves teammates continue to show plenty of character this season.

Boudreau scored three goals, including back-to-back goals in the second period, to propel Watertown to a 6-3 victory Saturday over the Delaware Thunder before a crowd of 933 at Watertown Municipal Arena.

A rookie forward, Boudreau survived a scary moment late in the second period when he was hit by Delaware’s Anthony Pisano. Boudreau was cut in the face on the play and immediately skated off the ice while play continued.

“Yeah, a really good win,” Boudreau said after the game, sporting several stitches above his right eye. “And everyone, once again — with a short bench — had to respond, found a way and got it done tonight. It was really good.”

Boudreau, who was cut from the impact of the hit and bled on the ice, didn’t return for the third period, but the damage had already been done offensively by the high-scoring forward and the Wolves.

“I got a puck off the boards and was trying to break out of our zone,” Boudreau said. “I got hit and he finished his check. I’m not sure, it happened really quick, so I’m not sure what happened there. But it’s part of the game, right?”

“Early on we were already short bodies and we dropped a few guys here throughout the game to injury,” Watertown defenseman and team captain Kyle Powell said. “But the guys who stayed out there battled the entire 60 minutes and we got the three points in the end.”

Corey Sherman, Justin Coachman and Ryan Marker scored a goal each for Watertown (24-19), which swept the two-game weekend set against Delaware.

“Everyone’s bought into a great system that’s working right now,” Boudreau said. “Getting those two wins this weekend is a real positive.”

Rookie goalie Mike Cosentino made 41 saves, including stopping all 19 shots he faced in the first period, to back the Wolves to the win.

The Wolves struck for two goals in the first period on tallies from Sherman and Boudreau, including Boudreau’s shorthanded goal late in the period to build a 2-0 lead.

Sherman scored 11:57 into the game, knocking in a feed from Vladimir Port. Then while Delaware was on its second two-man advantage of the period, Boudreau converted on a 2-on-1 breakaway, finishing off a cross-ice feed from Cole Sonstebo with 45 seconds left in the period.

In all, Watertown killed off all three of its penalties in the opening period, including pair of two-man advantages.

“We took some bad penalties there, it was nice to finish that period with the shorthanded goal, that was big,” Powell said.

After Delaware drew within 2-1 on Brian Dunford’s goal 2:55 into the second period, Boudreau followed with his two successive goals within a span of 3 1/2 minutes for a 4-1 Watertown lead.

He finished off a partial breakaway with Dominik Bogdziul at 4:38 and he scored off a feed from Marker at 8:07, converting on a Delaware turnover, for three-goal advantage.

“That’s huge, we did that a little bit (Friday), too, we started off a little bit off and then we went on a run,” said Boudreau, who has scored 28 goals in 43 games this season. “And that really brings a team together, that gives us a spark of energy.”

Coachman followed with a power-play goal at 9:23 for a 5-1 lead, before Delaware’s Evgenii Demin scored with 1:23 left in the period, just moments after Boudreau had left the game.

“It was a good character win, though,” Watertown coach Paul MacLean said. “I thought we looked good on a couple of power plays, again working the puck behind the net like we’ve been working on. And we got some scoring from other guys as well, which will give them some confidence.”

After no penalty was called on Pisano’s hit on Boudreau, Pisano was later assessed a five-minute major penalty and a game misconduct for spearing Watertown’s Joe Deveny in the third period.

“I think it was kind of bush league, the referee should have blown the whistle there,” MacLean said of the hit on Boudreau. “What if he was really hurt? What if he had cut his throat? But what are you going to do?

Watertown had entered the third period down to only 12 skaters, including six forwards and six defensemen before the hit on Deveny.

n NOTES: After the Wolves lost forwards Tanner Hildebrandt and Jamie Lukas to injury on Friday night, both were sidelined on Saturday. ... Earlier in the day, Watertown signed defenseman William Lamoureaux and claimed forward Colin Edwards off waivers from Danbury. Lamoureaux played Saturday and recorded an assist for his first pro point. ... The Wolves finished the season series with Delaware by winning nine of the 10 games, including winning the past six encounters. Watertown will host the league-leading Carolina Thunderbirds at 7:30 p.m. next Friday and Saturday.