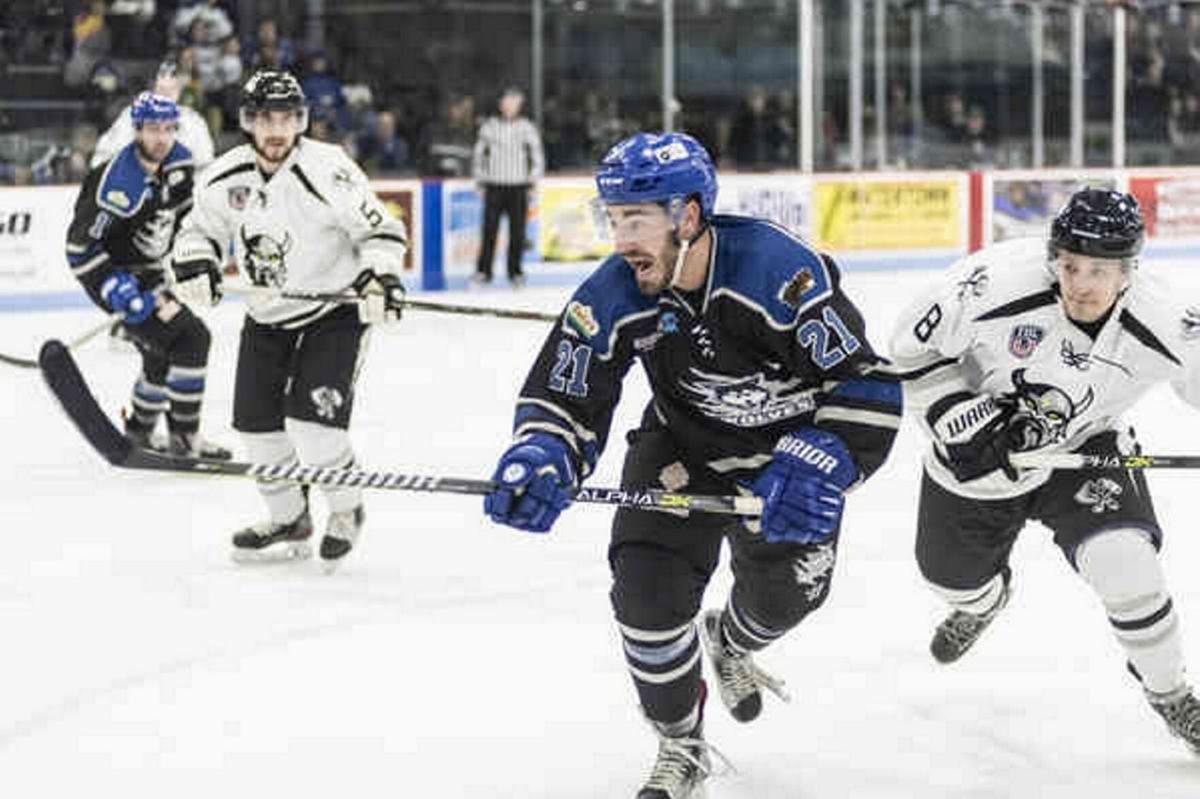 Deric Boudreau of the Watertown Wolves, left, and Robin Vortanov of the Delaware Thunder chase the puck during a game on Nov. 30, 2019 at Watertown Municipal Arena. Watertown Daily Times 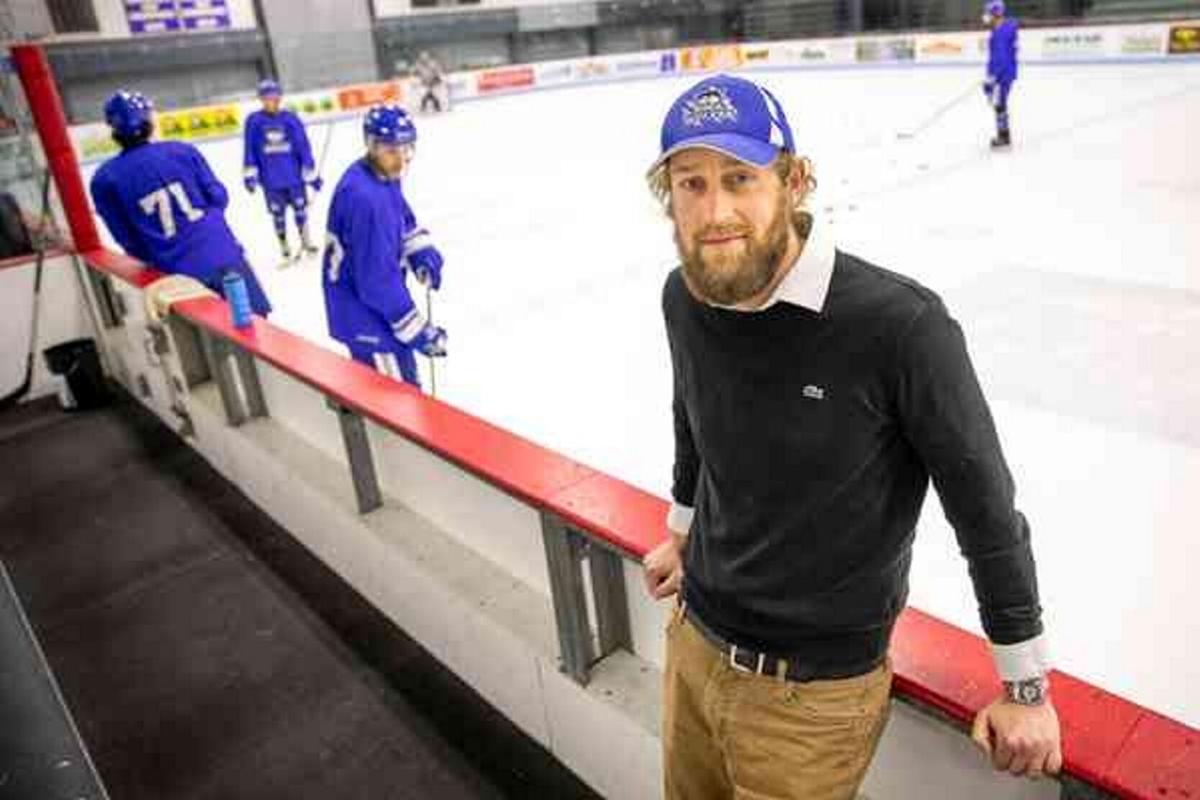 Deric Boudreau of the Watertown Wolves, left, and Robin Vortanov of the Delaware Thunder chase the puck during a game on Nov. 30, 2019 at Watertown Municipal Arena. Watertown Daily Times

The Federal Prospects Hockey League will have a new look this season, as will the Watertown Wolves.

The Wolves announced their schedule Tuesday for the upcoming campaign, one that won’t include their top rival of past seasons, the Elmira Enforcers.

Watertown will open up its league slate when it hosts the Binghamton Black Bears on Oct. 29 and 30 at Watertown Municipal Arena.

“The teams are pretty far apart and obviously we lost our closest opponent, but now we have Binghamton,” said Wolves’ owner Andreas Johansson. “So we definitely made a few changes and trying to even things out on weekends and weekdays and what not, it’s a little unusual, but overall I’m really happy with how it came out for us.”

The league was to have been an eight-team circuit for the upcoming season and had drawn up a schedule before Elmira suddenly announced on July 31 it would not play in league this year, even after the team took part in league meetings in May.

“We went from eight to seven, so that really put some last-minute things in there that needed to be redone,” Johansson said. “And obviously the schedule is not perfect when you have an odd number of teams, it’s always going to be that way.”

In the restructured schedule, Watertown will play 59 games, including 29 home games at the Fairgrounds arena. Home games tentatively will be played at 7:30 p.m., with Sunday games to be played at either 3 or 5 p.m.

The Wolves didn’t play last season even after a league schedule was formed to commence in February following a delay because of precautions taken due to the pandemic.

Watertown was scheduled to open an abbreviated season on Feb. 3 against Elmira in Watertown. After a pregame off-ice incident between several players that day, Elmira never took the ice in what would have been the league’s season opener. A week later on Feb. 10, Wolves management subsequently announced it would not be playing that season, because of concerns about the pandemic.

“Last (season) with that debacle at the end after the guys spent so much time getting ready,” Johansson said, “it was very hard and I think for the fans, too, it was difficult, too, to get that close and even playing three preseason games and then having the rug pulled out. ... But we can’t wait, our season is getting closer.”

Binghamton is an expansion team that is also owned by Johansson, who purchased the franchise in the offseason. Last season Binghamton was an American Hockey League city, home to the New Jersey Devils’ top affiliate.

“I think it’s a huge step for the league, too, to be in a building like that and truly it’s ... almost NHL-level facilities,” Johansson said. “It brings excitement and it is really good for Watertown, because essentially we lose one close opponent and at least we’ve replaced it with someone that’s ever closer.”

When the Devils announced they would be moving their top farm team to Utica in what was reported as a 10-year affiliation deal, an opening was created in Binghamton.

“It’s a beautiful building and they have 40-plus years of a tradition of hockey,” Johansson said. “I got a call that the Devils were out and they were interested in a FPHL team down there and I worked with the rink manager and the county executive down there and put something together. I never saw myself owning another team other than Watertown, but just the opportunity there to just carry on the tradition there, I just couldn’t turn it down.”

The FPHL will be comprised of seven teams this season after Danville in Illinois dropped out of the league, which still includes Danbury, Delaware, Port Huron, Carolina and Columbus (Ga.).

Elmira’s decision to not play this season took many by surprise, including Johansson.

“Let’s just say that the IDA, which is the Industrial Development Agency, which is part of the county down there, and Robbie Nichols the (team) owner, they just couldn’t reach an agreement to continue the operation of the team,” Johansson said. “ ... As far as I know, it was a big surprise to everyone because the original schedule we had was for eight teams.”

The Wolves’ roster is predominantly made up of the roster built for last season, including high-scoring forward Fred Hein, as well as previous Watertown players such as Lane King.

The team lost several players who will return to play with Delaware, including Ryan Marker, but Watertown selected three notable former Elmira players in a dispersal draft, including longtime Wolves nemesis Ahmed Mahouz, as well as goalie Joe Young and forward Brendan Hussey.

Earlier, the Wolves selected defensemen Ben Boukal and Alex Pommerville and forward Scott Coash in the Danville Dashers’ dispersal draft, after completing a deal that sent Marker back to Delaware.

Watertown, which is again coached by Brent Clarke, will hold its training camp about a week before the regular season starts in October, with those dates to be announced.

“We’ve been pretty active signing players,” Johansson said. “We’ve got the usual, we’ve got some free agents coming in.”

The FPHL’s schedule this season will stretch into the third week of April, with playoffs to follow.

“I think we go twice to Carolina, we go two or three times to Port Huron and I think we only go once to Columbus,” Johansson said. “But it’s a little more challenging to put the schedule together, keeping in mind that every team wants to have good weekend dates and at the same time, nobody really wants to take the longer trips.”

The Wolves’ home schedule also includes six Sunday games, with the first on Jan. 9 against Carolina.

“We (the FPHL) had our free-agent camp this week in Chicago and we had close to 50 players attend and I think coach signed three, four, maybe even five guys out of there to go through to our main (training) camp as we get closer,” Johansson said. “So the excitement level is real high and I think the (Watertown) team is no doubt the team to beat.”

Here is the Wolves’ season schedule: