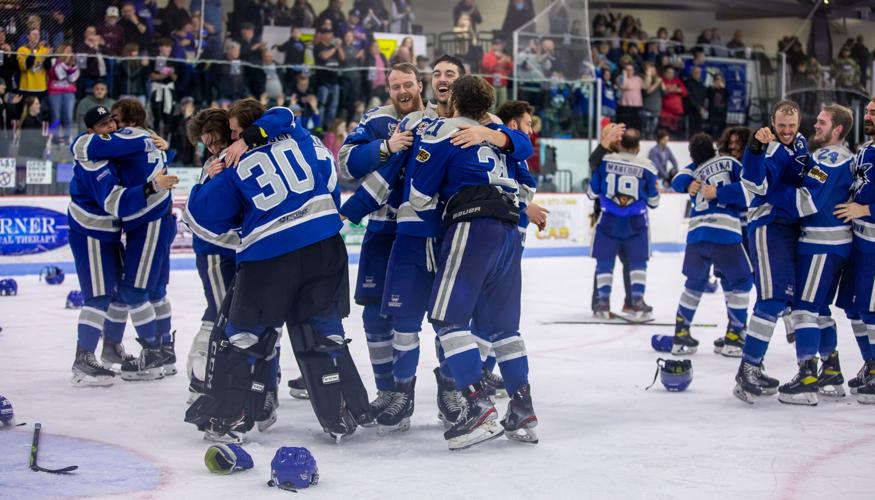 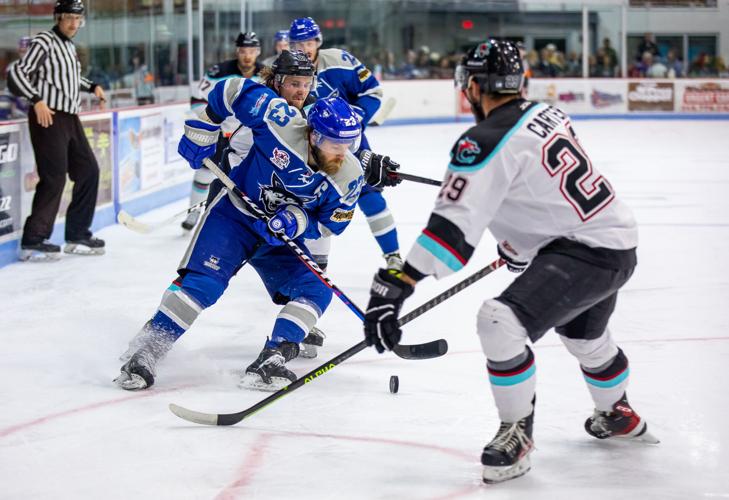 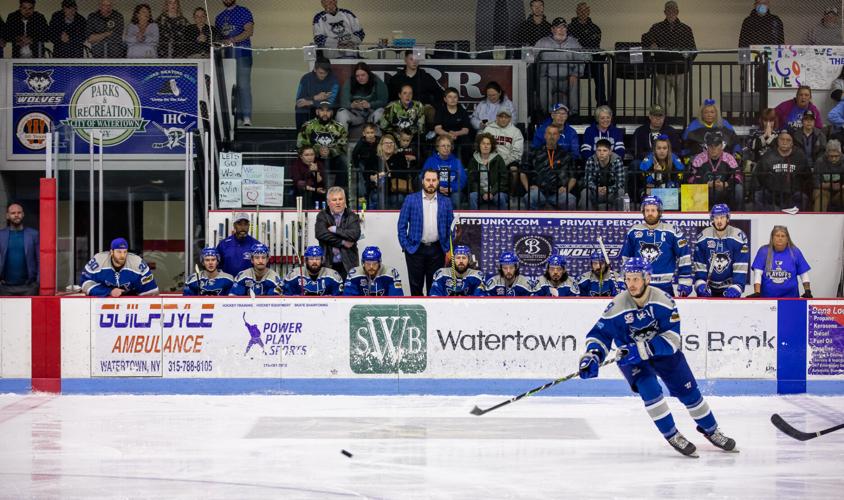 The Watertown Wolves’ bench and coaching staff during the second period of Monday night’s championship game against the Columbus River Dragons in Watertown at the fairgrounds. Kara Dry/Watertown Daily Times 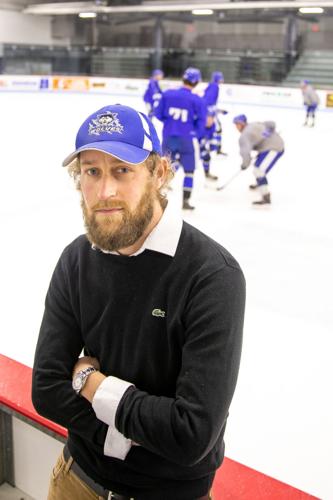 The Watertown Wolves’ bench and coaching staff during the second period of Monday night’s championship game against the Columbus River Dragons in Watertown at the fairgrounds. Kara Dry/Watertown Daily Times

They hoisted the Commissioner’s Cup once again after they defeated the Columbus River Dragons, 3-2, in double overtime Monday night to prevail in the third and deciding game of the league’s final series, also finishing off a season capped by the announcement of a change in team ownership.

Watertown also won league titles in the 2014-15 season, in its first campaign in the league, and in 2017-18, finishing off each championship with a win on home ice at Watertown Municipal Arena.

Lane King provided the latest heroics as he scored the deciding goal in the second overtime in what was the longest game in league history, finishing at 90 minutes and six seconds.

“You can’t draw it up any better than this,” King said. “These group of guys, whether they were in the lineup back then or not (at the start of the season), everyone bought in, everyone supported each other. There was never any jealousy and everyone pulled on the same rope.”

The Wolves bounced back after losing the first game, 3-2, at Columbus, and won both games in Watertown, including a 4-1 win last Sunday in which they trailed 1-0 heading into the third period. Rookie Cole McKechney started the rally by scoring on a penalty shot to tie the game and veteran Andrew Harrison scored on a breakaway for the go-ahead goal.

This set the stage for the decisive third game that finished off a season that began in late October and stretched all the way to early May.

“We had such a great team that I always felt confident,” said Andreas Johansson, who had been the Wolves majority owner until Monday’s game marked the transition to new ownership. “But at the same time, because with the way the playoffs were, with just a best-of-3 (series) over just a few days, like anything could happen. So I really felt like we deserved to be champions and I didn’t want us to lose it because of some random kind of event. But fortunately we ended up champions and it all worked out.”

After Monday’s game, Johansson announced he had sold the team to local businessman Tyler Weese, a move that will usher in another era of team ownership.

Purchasing the Wolves was Johansson’s first venture in buying and then running a pro sports franchise.

“Obviously you learn a lot since it’s your first year, it’s like baptism by fire,” said Johansson, who bought the Wolves in April 2020. “I think you figure out how much goes on that has to work completely off the ice, like the travel part, which is a challenge being as far north as we are. And how much really goes into the operation off the ice and just how much time goes into it from everybody, there’s really no down time. Even from long before the season begins, it’s just full-time, it’s just so much work into building this.”

Weese, who resides in Carthage, is the owner of several local businesses, including the The Roxy Hotel, Restaurant and Bar in Cape Vincent.

Johansson said Weese will likely keep on much of the Wolves’ staff, including head coach Brent Clarke, who also lives in the area.

Weese is the latest local owner of the Watertown franchise, which dates back to 2014 when a local ownership group purchased the team. After the team was dormant the next season while renovations were being made to Watertown Municipal Arena, the franchise was then sold after the 2016-17 season to league commissioner Don Kirnan.

“Owning the Wolves was an unbelievable time,” Johansson said. “But it’s also, I have a pretty large business that I run for my real business, we’ve got some tremendous opportunity and owning a sports team, as well as owning two, it takes up a lot of time. ... And I wanted to sell the team while it’s in a good place. It’s extremely well-managed, it’s in a really good position. If I turn it over to someone local, then can go to the rink everyday if they have to, they can go to the meetings and do what they have to do.”

Johansson, who also owns the Binghamton Black Bears of the FPHL, believes he has left the franchise in good hands.

“It’s like, if I sell it now I still turn over a great asset,” Johansson said. “Everybody knew that this was a pretty solid team to take over, and I know Curtis (Mosley) our equipment manager and Brent have a relationship with Tyler, and they introduced him to me and he was a willing buyer. And he seems to want to do some of the things that I was looking at doing that we never got done, like adding video boards. He seems committed to it and living locally I think he will add a lot to the team.”

Johansson, who says he plans to continue to own the Binghamton team, feels proud that he has helped bring another hockey championship to Watertown.

“That’s all I wanted,” Johansson added. “If you look at this primarily as a business, you’re going to be disappointed because it’s so difficult to make money long term. ... So my goal was always to bring a championship and we did that, I’m very proud of what we did.”

During the regular season, the high-flying Wolves, who pressed an up-tempo style of play, led the league nearly in wire-to-wire fashion, securing the No. 1 seed for the playoffs.

“It’s been an incredible year, at the start we had 18 rookies and no other team will have that,” Wolves team captain Justin MacDonald said. “We only had three, four, five guys who had played pro before and we were trying to figure out a way and how to bring this together and show them that this is a long year.

“Fortunately we were able to bring in some older guys, Harrison, (Ahmed) Mahfouz to help us lead the way.”

MacDonald, who was honored as the league’s playoff MVP, scored a league-record 60 goals and totaled 117 points, also a franchise record, in 49 games in the regular season.

MacDonald and rookie forward Alexander Jmaeff teamed up as the league’s most potent scoring duo as Jmaeff recorded 91 points of his own, including 48 goals, in 50 games.

McKechney generated a 30-goal season, as well as totaling 70 points in 59 games.

“An unbelievable group of guys, they welcomed me with open arms” said Wolves veteran forward Ahmed Mahfouz, who has won a FPHL championship with four different teams. “I tried to do everything in my power to help these guys succeed and they did the same thing for me. I’m just on cloud nine right now, I’m loving life right now, all the hard work and dedication, it’s all worth it.”

The Wolves also fared 24-4 on home ice in the regular season, with two of those losses coming in overtime, and finished 19-10-2 on the road, which also included two losses after regulation.

“You know what, I just think I chalk it up to our guys battle in practice every day for two hours a day,” said coach Clarke, who also coached the Wolves to their first league title in the 2014-15 season. “And you know what, they battled for each other every game and it shows, we had the energy at the end of the (last) game.”

The journey to winning a championship took much longer than seven months for Johansson. After COVID-19 concerns wiped out the 2020-21 season, the Wolves attempted to play an abbreviated campaign beginning in early February, but Johansson called off the season year after the Elmira Enforcers forfeited the season opener for both teams in Watertown.

“It truly was like a journey with not playing last year and trying to keep it going,” Johansson said. “And when we weren’t playing it was even worse, so it feels like it’s been two years, but it was worth it.”

Undaunted, the Wolves returned with a vengeance this season guided by Clarke, who also serves as the team’s general manager.

Moves made by Clarke included the signing of Mahfouz, previously a longtime nemesis for Wolves teams in the past, as well as the Thousand Islands and then Watertown Privateers, and rookie Beukeboom, who won four of five decisions in the playoffs.

“Clarkie is an unbelievable recruiter,” Johansson said. “I think that’s why he’s been so successful whereever he’s been as far as being able to find these players. I don’t think anybody expected to see Mahfouz in a Watertown jersey, or him being able to add a goalie like Beukeboom or adding Harrison coming in as a real veteran player.”