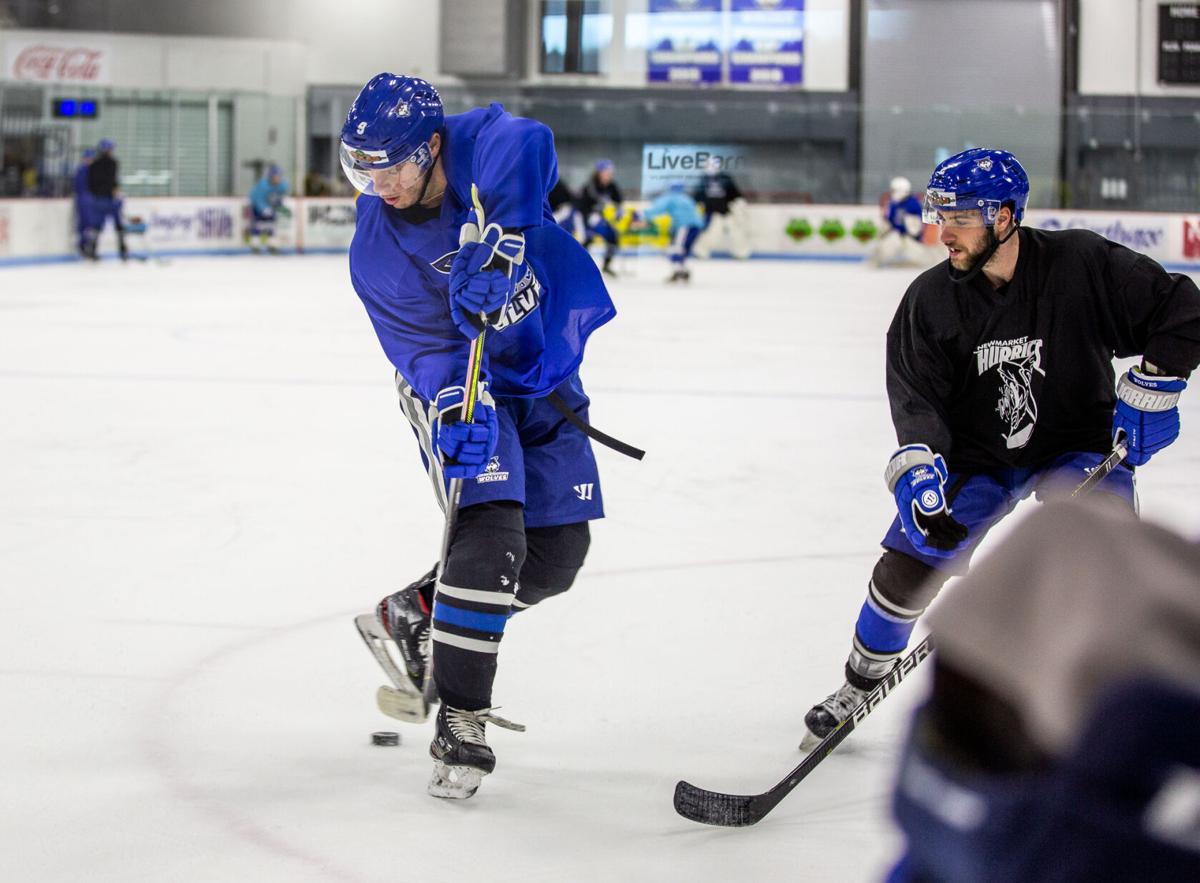 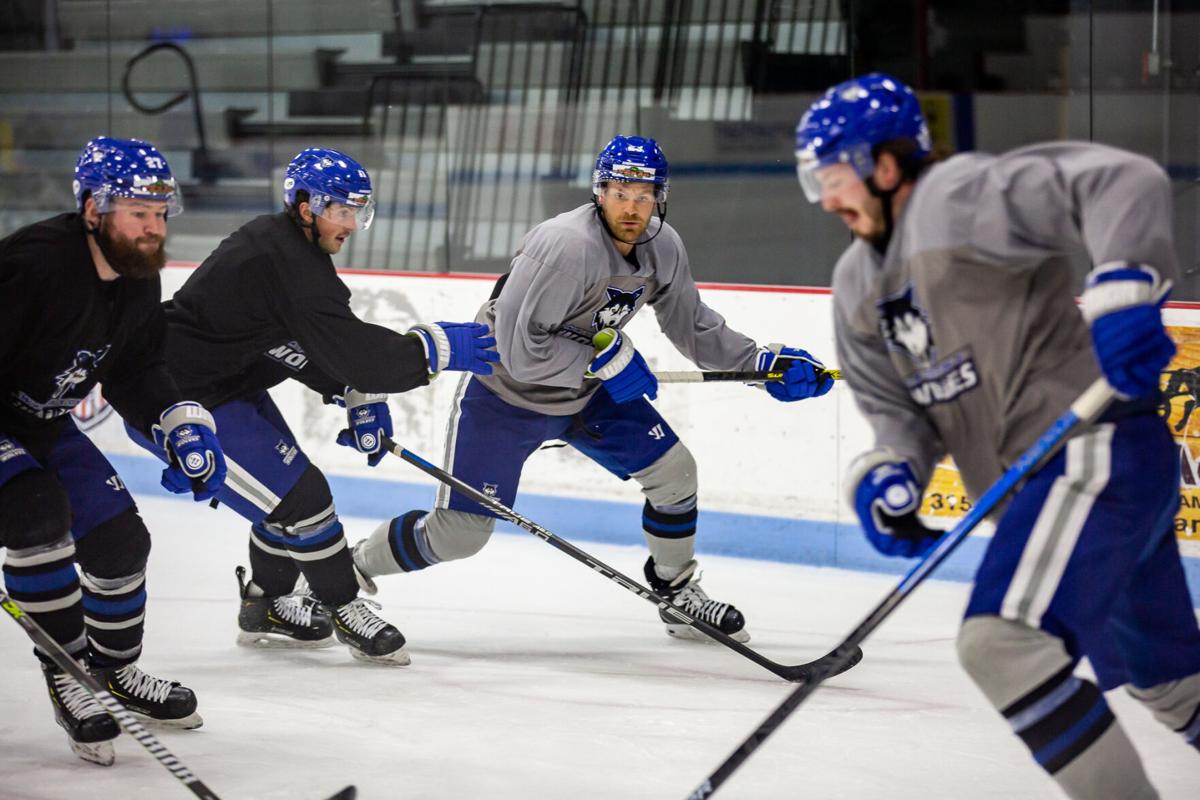 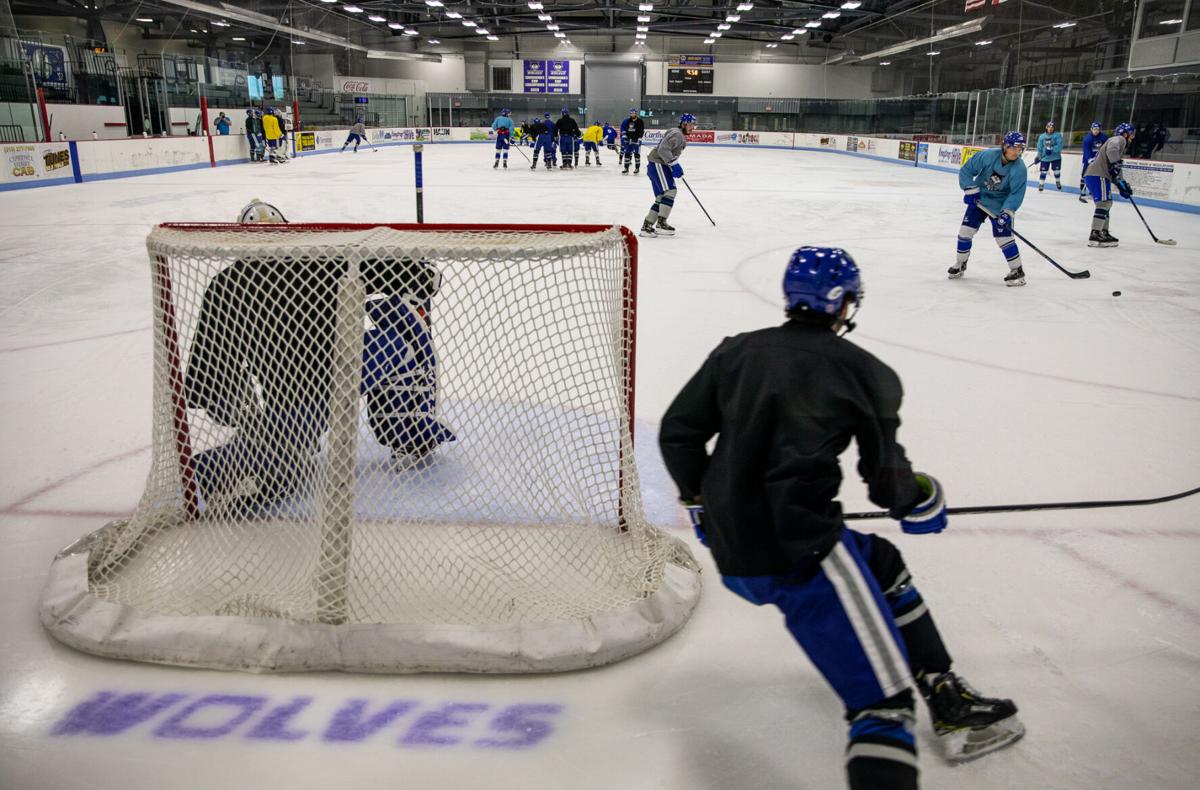 The Watertown Wolves run through a drill during practice on Tuesday morning at Watertown Municipal Arena. The Wolves completed their training camp on Thursday. Kara Dry/Watertown Daily Times 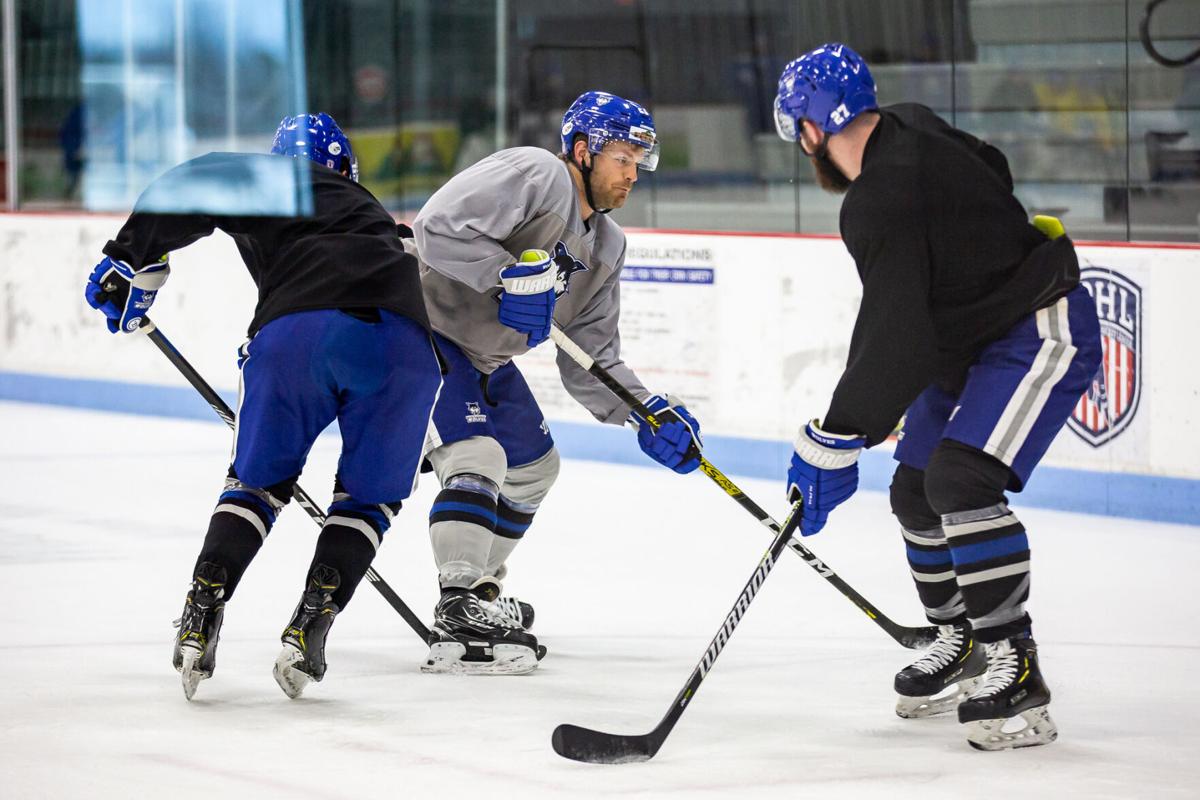 The Watertown Wolves run through a drill during practice on Tuesday morning at Watertown Municipal Arena. The Wolves completed their training camp on Thursday. Kara Dry/Watertown Daily Times

WATERTOWN — In what has become a long road just to hold a hockey season, the Watertown Wolves wrapped up their latest training camp on Thursday morning.

And in a hockey season like none other, the Wolves experienced a rarity — two training camps — the first concluding in the first week of December and the second held over the past week at Watertown Municipal Arena.

With the Federal Prospects Hockey League season already postponed multiple times because of concerns surrounding the coronavirus pandemic, Watertown is determined to play a season, of sorts.

The Wolves will host the Elmira Enforcers in a preseason game at 7:30 tonight, before playing a pair of preseason games at Elmira on Saturday and Sunday.

The two teams, the only franchises in the league who have been cleared to play thus far, will then open their regular season at 1 p.m. Wednesday in Watertown. No fans are permitted to attend due to state guidelines.

“This part of camp has been great, we’re trying to get the systems down here and move the puck around,” Clarke said. “We’ve got some new faces and I like what we’ve built. It’s been a long process, but I think the fans and the new owner will be happy with the product they see.”

After the Wolves host the Enforcers at 7:30 p.m. next Thursday, the two teams will play in Elmira next Friday and Saturday.

“It’s good to be back,” said MacDonald, a high-scoring winger who played on the Wolves’ first championship team in their first season in the league in 2014-15 and played on the Watertown Privateers the year before. “At this point in my life, I just want to win, I want to be able to help guys move up and develop and give them the opportunity to be the best hockey player that they can be. And helping out and being part of the coaching staff here, I enjoy it, it’s a lot of fun for me.”

Said Basey: “Guys are gelling really well together, you’ve got to treat it like every year, everybody is still battling for a spot.”

“I think it’s been really good, it’s nice to get the full team in here,” King said. “I think that is important, I know in December we had the majority of the guys, but it’s nice to get the key pieces in here, like Justin MacDonald and Ryan Marker, who weren’t here then. It’s really great to have everyone here, which is a big help for team chemistry.”

With fans still not able to attend Wolves gamess, majority owner Andreas Johansson has vowed that the team will play home games without spectators, for now.

“To be honest with you, that’s in our minds, but we’ve got to put that behind us and into the rear-view (mirror) so we can just kind of push forward,” Clarke said. “Until something changes, we’ve just got to keep playing until we’re allowed to have fans and everything gets back to normal. We’re just going to keep pushing on.”

The team, which said this season’s games will be broadcast on the Wolves’ team YouTube channel, provided its faithful with an update Wednesday via the team’s Facebook page.

“Our first priority is the safety and well-being of all our players, staff, and the community, which means our focus has to be on preventing any further spread of Covid 19,” part of the statement said. “The Wolves have led the way in ensuring a FPHL season still takes place in 2020/2021, and we are doing so in order to fulfill a promise made to our players, fans, and corporate partners — all of whom have gone out of their way to be there for us this season. We know how much you are all dying to come see the guys play, and enjoy what is likely the best Wolves team to ever take the ice.”

So far, no season schedule beyond the first week of February has been posted by the Wolves or the league.

Last year, the Wolves were on their way to the playoffs when the remainder of the regular season and the postseason was canceled by the league on March 16.

The Wolves and Enforcers played their last game on March in Elmira, a 4-3 win for the Enforcers, which proved to be the last pro hockey game of the season before the NHL resumed play in August.

“It’s been long and a little bit of anxiety, obviously, constantly waiting for news about what’s going to happen,” King said. “I think you look at it as you just control what you can control and after being injured last year, it’s just nice to be back on the ice playing hockey, so everyday is a good chance to do that and that’s all you can ask for at this point.”

Clarke coached Elmira the past two seasons, including the 2018-19 season when the Enforcers were an expansion team.

Elmira is now coached by longtime Wolves nemesis Ahmed Mahfouz, who is now a player coach, and the Enforcers’ assistant coach is Paul MacLean, who coached Watertown last season.

“It’s been too long, so we’re looking forward to it,” Clarke said of the prospects of finally playing a game.

“It’s been a crazy road,” Basey added. “I only played 21 games last year, I broke my wrist, so it’s nice to be back. Everybody’s excited to get back out there and treat it like a normal year.”