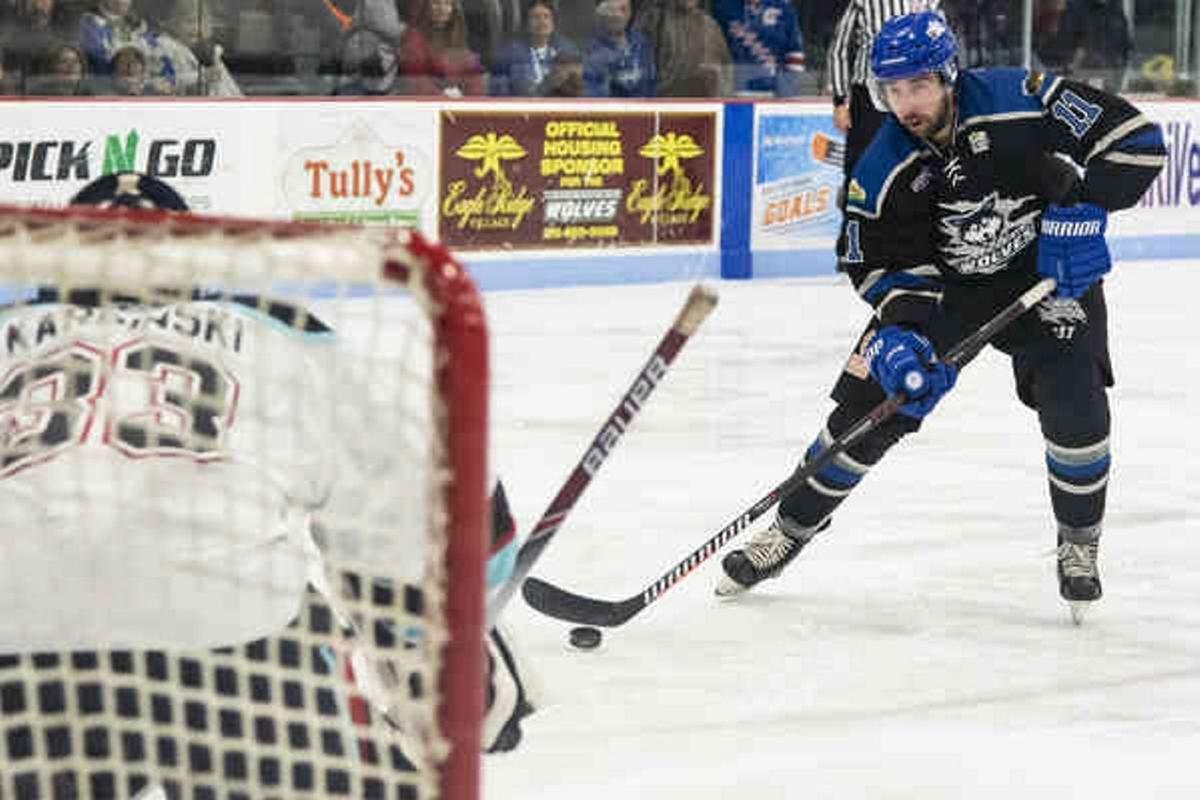 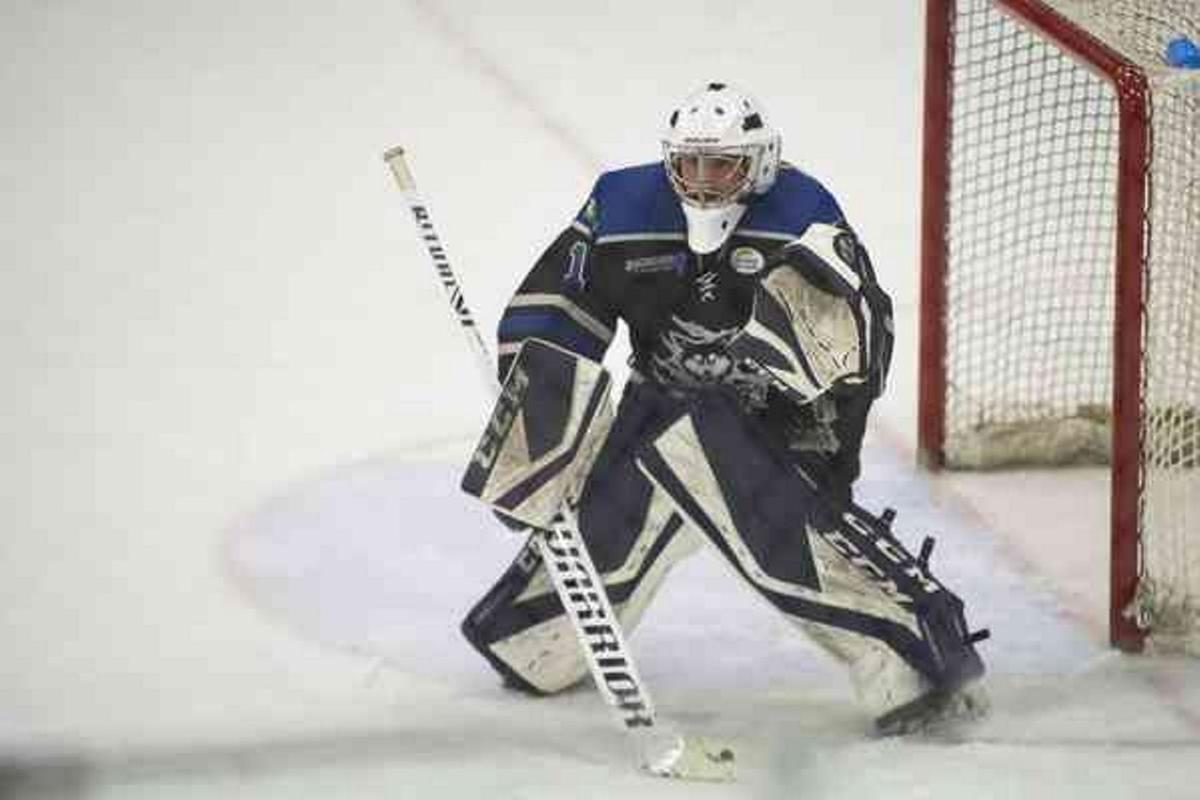 Watertown goalie Jeremy Pominville looks to make a save during the Watertown Wolves’ home game against the Columbus River Dragons on Jan. 18 at Watertown Municipal Arena on Saturday. Emil Lippe/Watertown Daily Times

Watertown goalie Jeremy Pominville looks to make a save during the Watertown Wolves’ home game against the Columbus River Dragons on Jan. 18 at Watertown Municipal Arena on Saturday. Emil Lippe/Watertown Daily Times

WATERTOWN — With the Watertown Wolves now into the second half of their season, a challenging stretch of games hasn’t deterred the team recently.

Coming off a successful weekend in Eastern Division play, the Wolves will get another shot at division-leading Danbury when they host the Hat Tricks at 7:30 p.m. today at Watertown Municipal Arena.

Watertown (16-5) is coming off a weekend in which they won three road games in as many days at the Delaware Thunder, capped by a 5-1 win on Sunday.

After returning to town, the Wolves will play their fourth game in six days when they tangle with Danbury (21-10) tonight.

Along with their three-game winning streak, Watertown has won four of its past seven games.

Later in the week, Watertown will host expansion Battle Creek at 7:30 p.m. on Friday and Saturday at the Fairgrounds arena.

By winning their past three games, the Wolves moved up and into second place in the Eastern Division.

Watertown now leads third-place Elmira in points, 55-52, as well as in points percentage, .556 to .542, which is used by the FPHL to determine its standings.

Danbury has won all five meetings with Watertown this season, including two in Watertown, with the last win an 8-1 decision at Danbury.

After tonight, the Wolves have only three games remaining in the regular season against the Hat Tricks in the third week of March. Watertown will play at Danbury on March 13 and 14 before returning to host Danbury in a Sunday matinee on March 15.

Last week, the Wolves signed rookie forwards Kristers Bormanis and Nikita Sidenko, who were acquired in a trade with Delaware on Jan. 22, and both made their debuts with the team last weekend.

Goalie Mike Cosentino was returned to the team from Macon of the SPHL and veteran Watertown forward Chase Tippin was suspended by the league indefinitely and left the team.

Stiliadis. making just his second start with the team, stopped 44 of 45 shots faced in Watertown’s win at Delaware on Sunday.

Stiliadis, who posted a 2-1 record with the Elmira Enforcers earlier this season, also played in five games with the Roanoke Rail Yard Dawgs of the SPHL.

Goalie Jeremy Pominville leads Watertown in net this season, as in 31 appearances he has posted a 12-12-2 record, a 3.70 goals-against-average, as well as a .901 save percentage.

Pominville won the first two games of the weekend series against Delaware, making 24 and 33 saves, respectively.

Several Wolves players from beyond North America have made an impact, including rookie forward Dominik Bogdziul, a Lithuanian native who has been with the team since November.

Bogdziul stands fourth on the team in scoring with 28 points in 24 games, including 13 goals and 15 assists. He has also totaled seven points, including three goals, in his past five games with the Wolves.

Rookie defenseman Vladimir Port, who is from the Czech Republic, scored his first two goals of the season last weekend, including his first pro goal in Watertown’s 3-2 at Delaware on Friday.

Bormanis, who is from Latvia, has played with four teams in the FPHL this season, including Danbury and Danville, as well as Watertown and Delaware.

Sidenko, a native of Kazakhstan, scored his first professional goal in the Wolves’ 6-4 win at Delaware on Saturday.

Sidenko has also played for Delaware, Battle Creek and Mentor this season.

Stiliadis stopped 44 of 45 shots, and Jamie Lukas recorded a goal and two assists for the second straight game to pace the Watertown Wolves to a FPHL win at the Delaware Thunder on Sunday.

After Delaware scored in the first period for a 1-0 lead, the Wolves then countered with five unanswered tallies, including three in a 2-minute, 37-second span in the final period.

Bogdziul and Kyle Powell and each recorded two assists for the Wolves.

Desjarlais scored two goals and assisted on two others and Powell scored a pair of goals as the Wolves defeated the Delaware Thunder, 6-4, on Saturday night in a FPHL game at Centre Ice Arena.

Pominville made 33 saves to record the win for Watertown.

Also on Saturday for the Wolves, Lukas scored a goal and assisted on two others and Sidenko scored a goal, his first professional goal after he made his team debut Friday night.

Pominville stopped 14 of 16 shots faced in the third period to complete the victory.

Sidenko, a former Delaware player, capped the surge with his goal 2:12 into the third period for a 6-2 lead.

The Thunder pulled within 6-4 on power-play goals from Anthony Pisano and Ryan Marker, with Marker’s goal coming in the final minute.

Pisano and former Wolves player Anton Kalinin each totaled a goal and an assist on the night.

Port scored the deciding goal one minute and two seconds into the third period as the Watertown Wolves edged the Delaware Thunder, 3-2, on Friday night in a Federal Prospects Hockey League game before a crowd of 651 at Centre Ice Arena.

Pominville made 24 saves, including stopping all six shots he faced in the third period, for the Wolves.

Port’s goal was also his first professional goal for the 23-year-old native of the Czech Republic.

Watertown snapped a three-game losing skid with the win.

Boudreau contributed a goal and two assists for the Wolves, who entered the second half of their 60-game regular-season schedule. Desjarlais scored a power-play goal.

Watertown also held off Delaware while it was shorthanded for the final 2:33 of the game.

Kalinin and Marker each scored a goal for Delaware and Taylor stopped 33 of 36 shots.