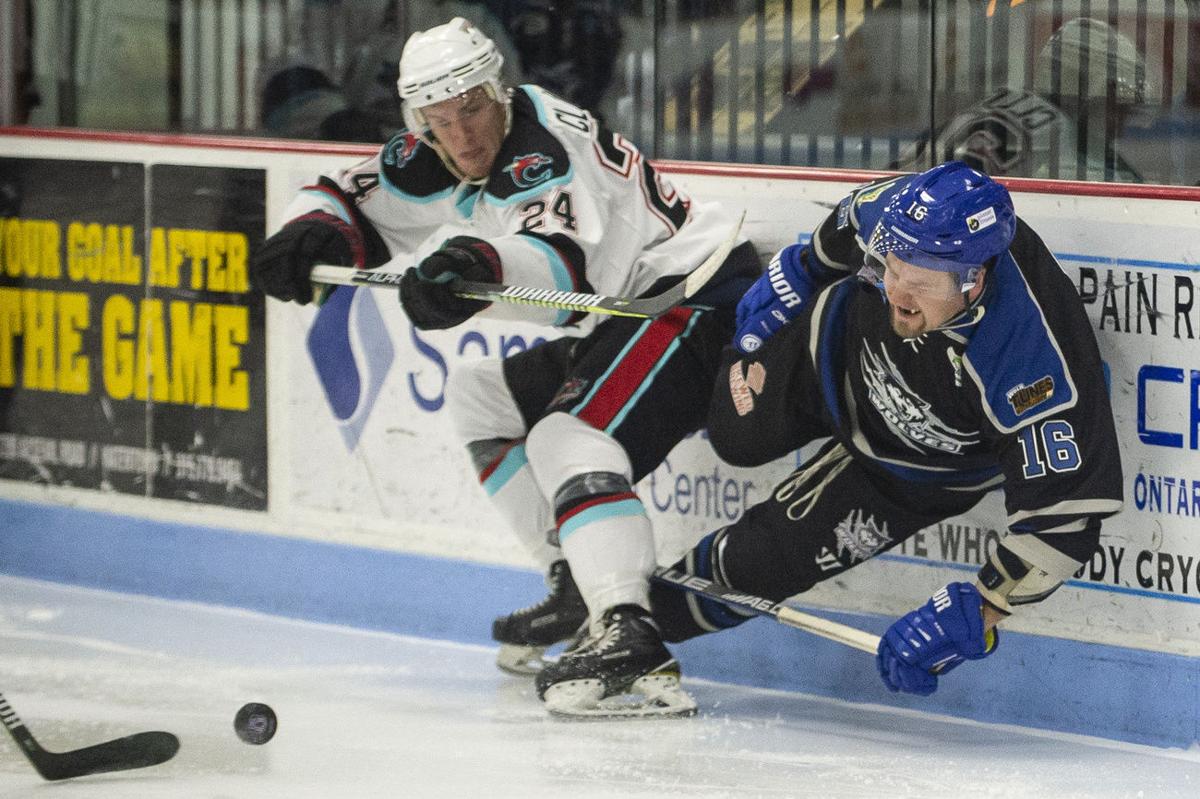 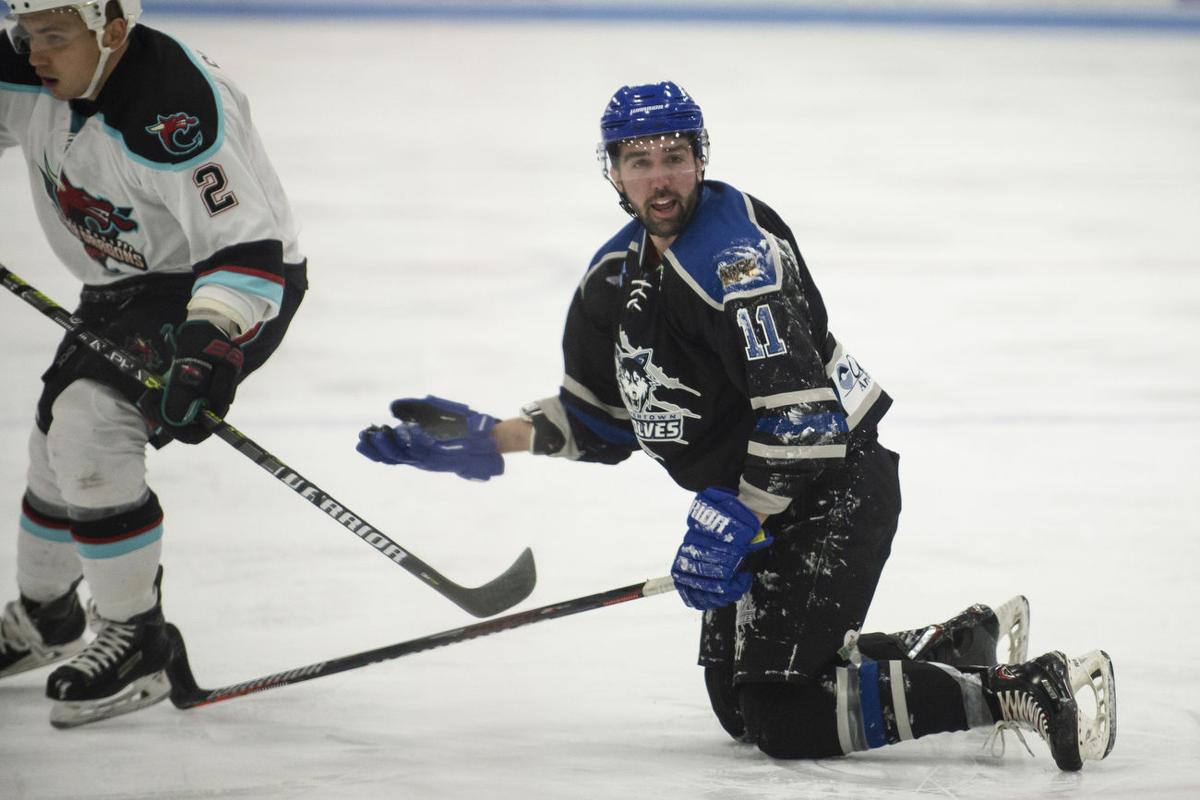 Watertown forward Jamie Lukas looks at an official for a penalty call after taking a hit during Saturday’s game against Columbus at Watertown Municipal Arena. Emil Lippe/Watertown Daily Times 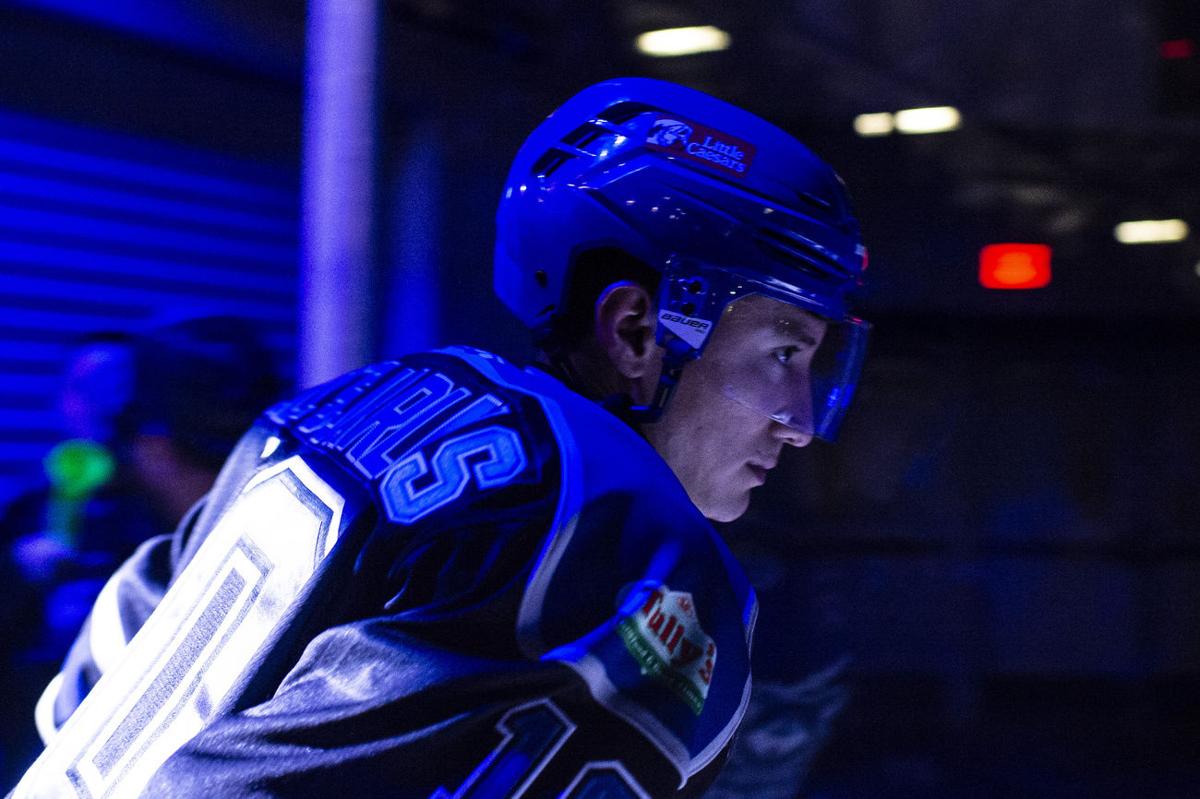 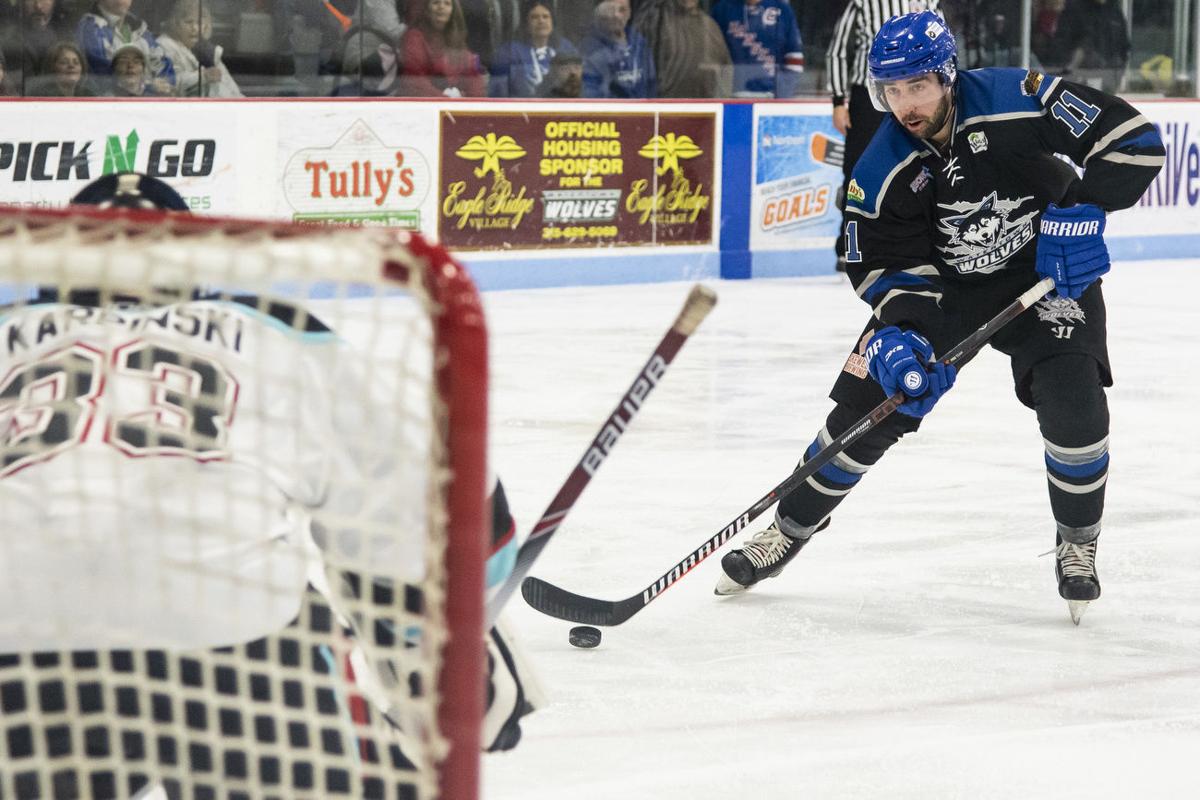 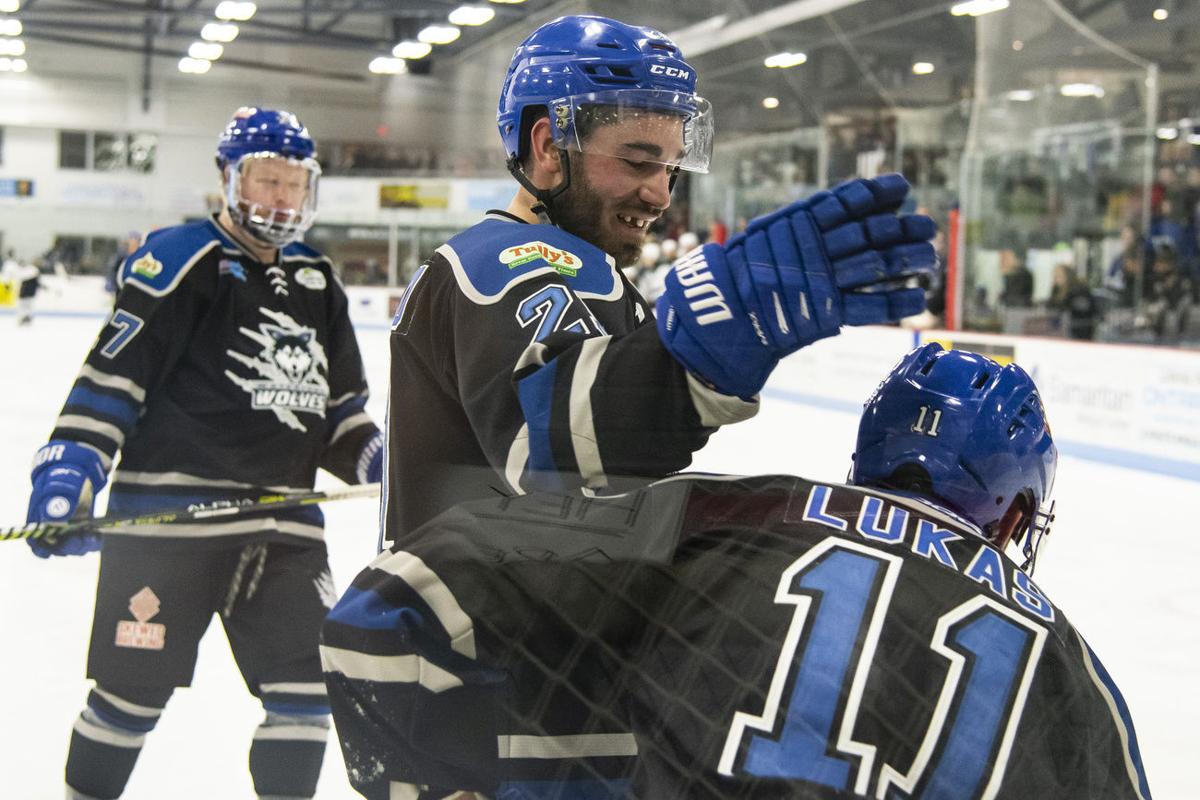 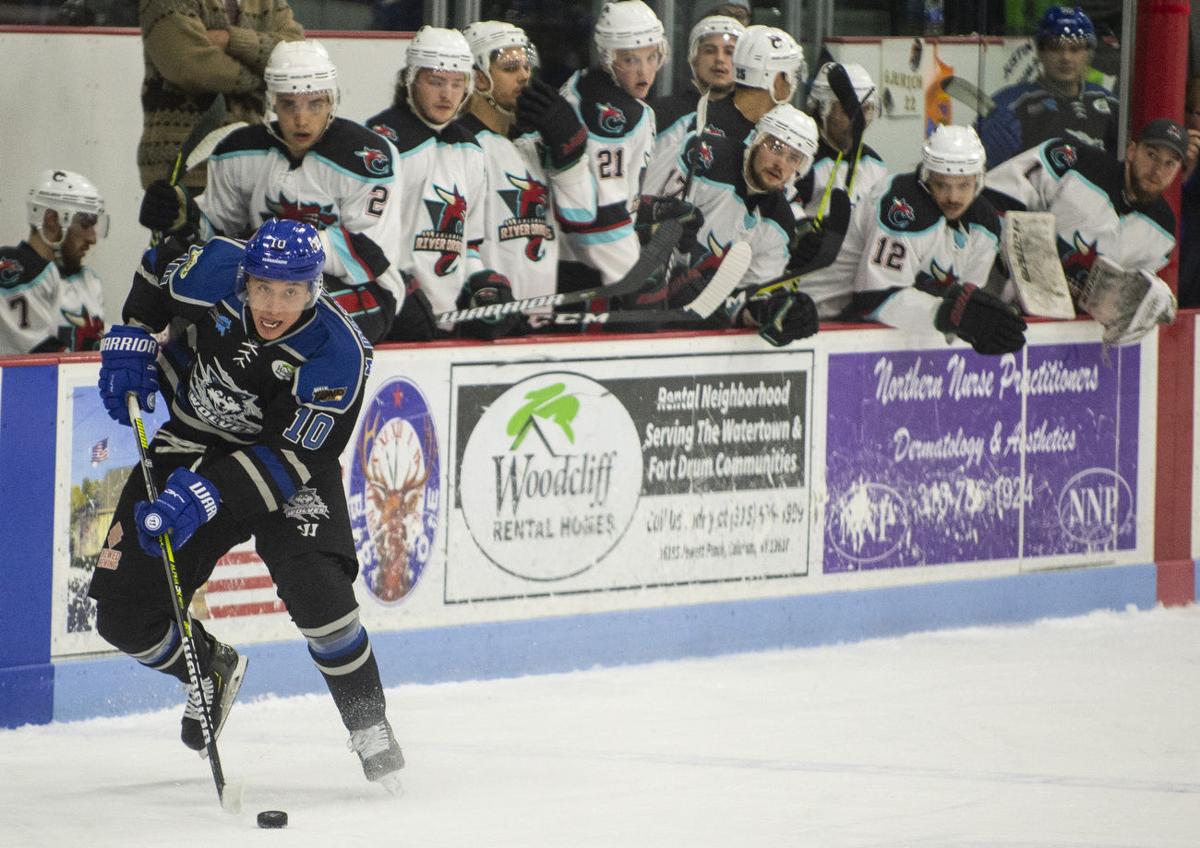 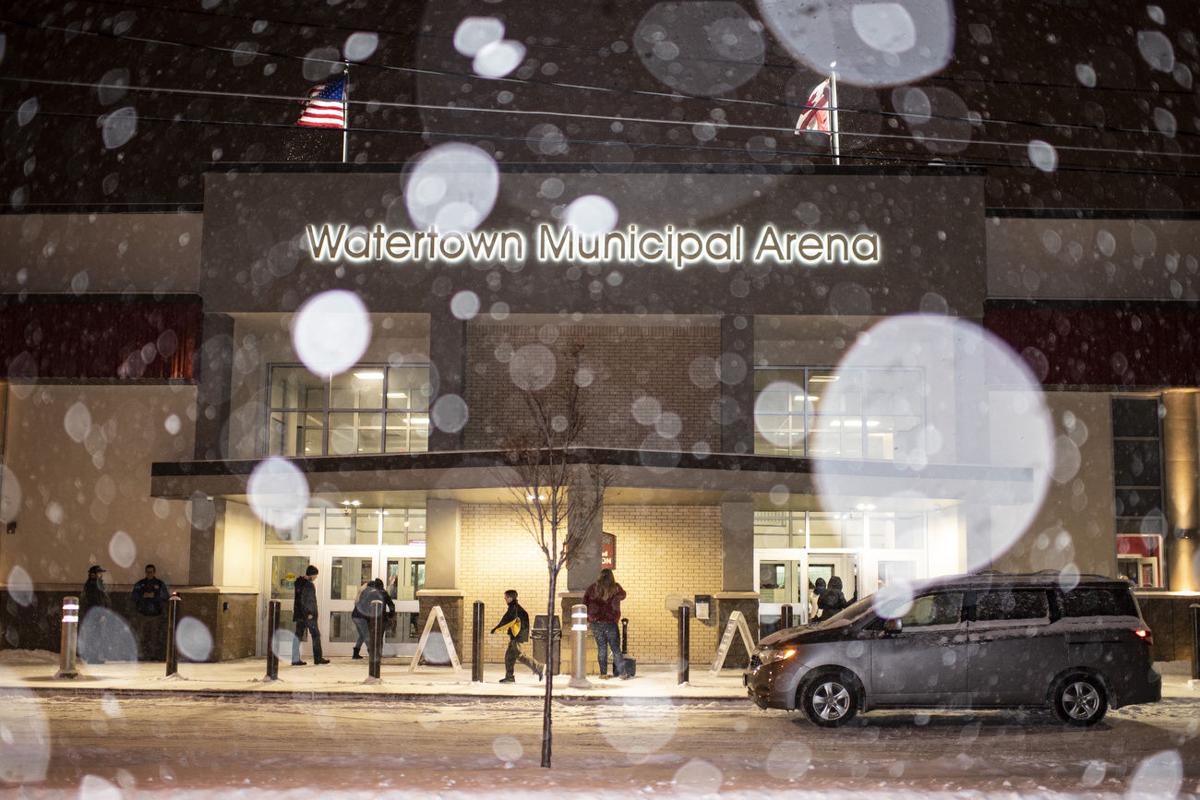 Fans enter Watertown Municipal Arena prior to the start of the Watertown Wolves’ home game against the Columbus River Dragons on Saturday. Emil Lippe/Watertown Daily Times 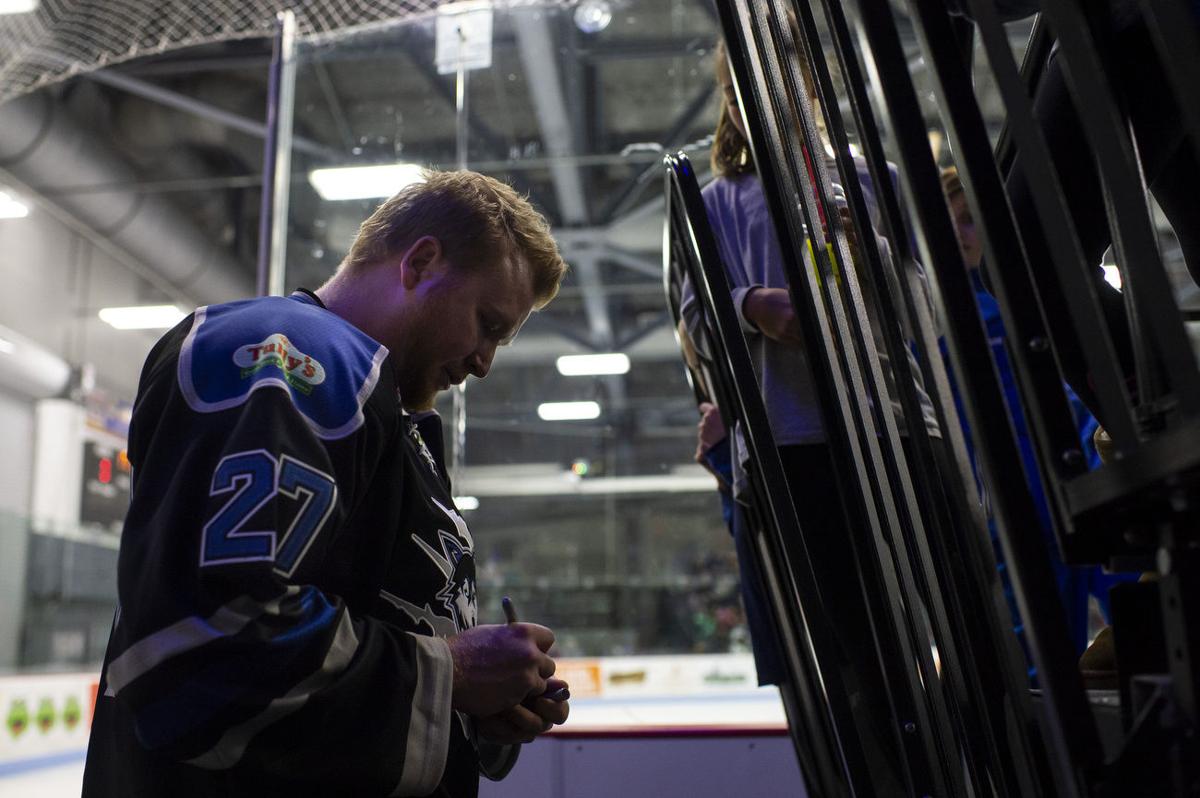 Watertown defenseman Kyle Powell signs autographs for fans prior to the start of the Wolves’ home game against the Columbus River Dragons on Saturday at Watertown Municipal Arena. Emil Lippe/Watertown Daily Times 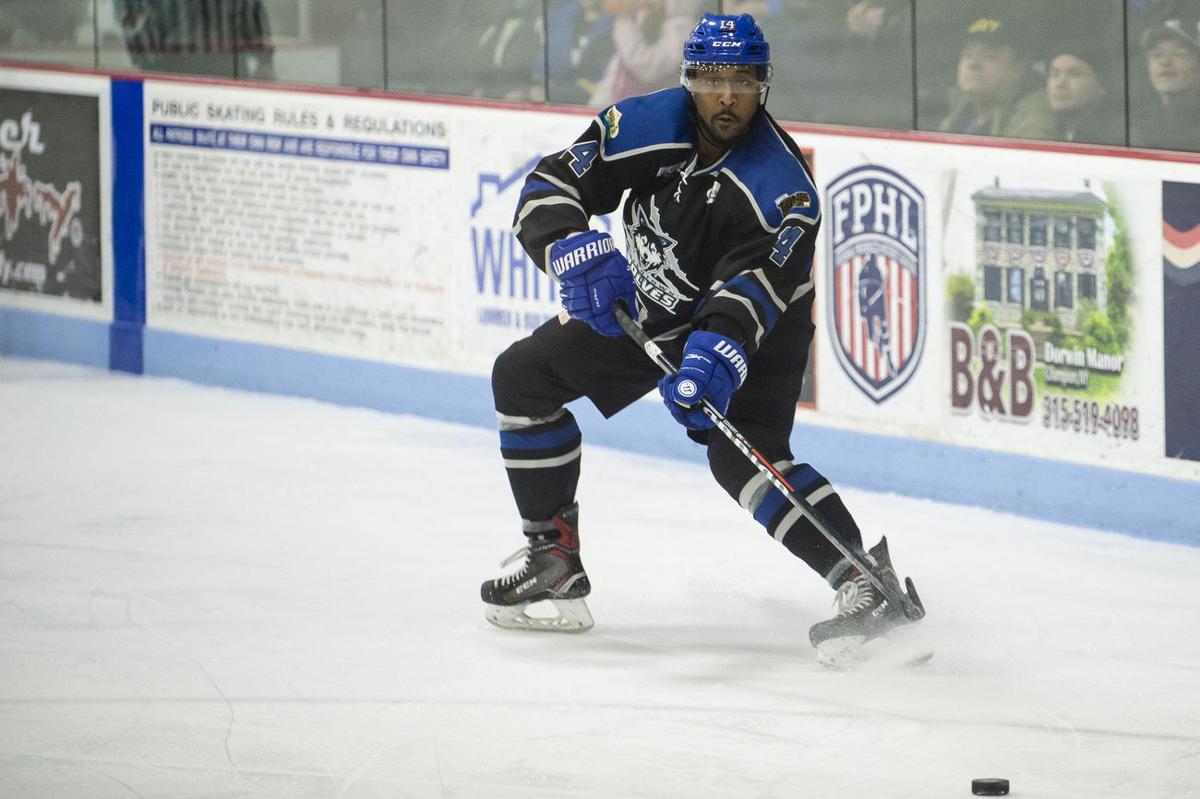 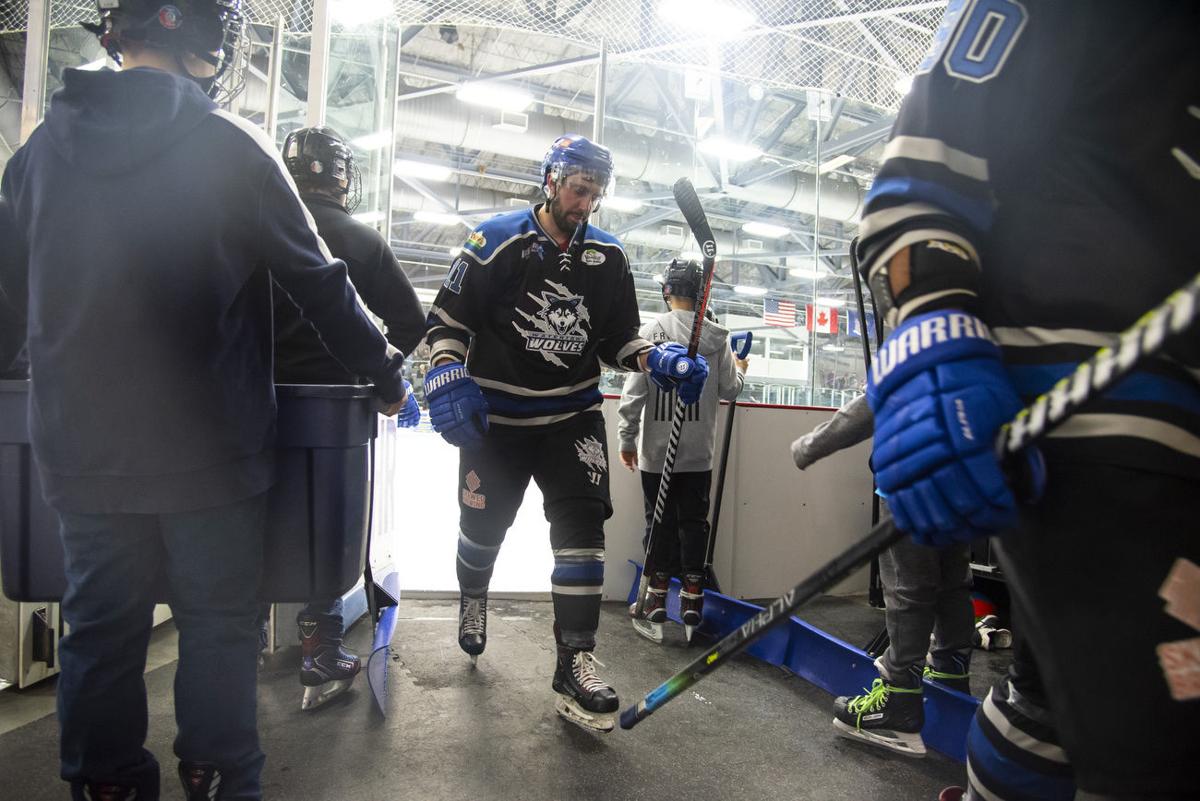 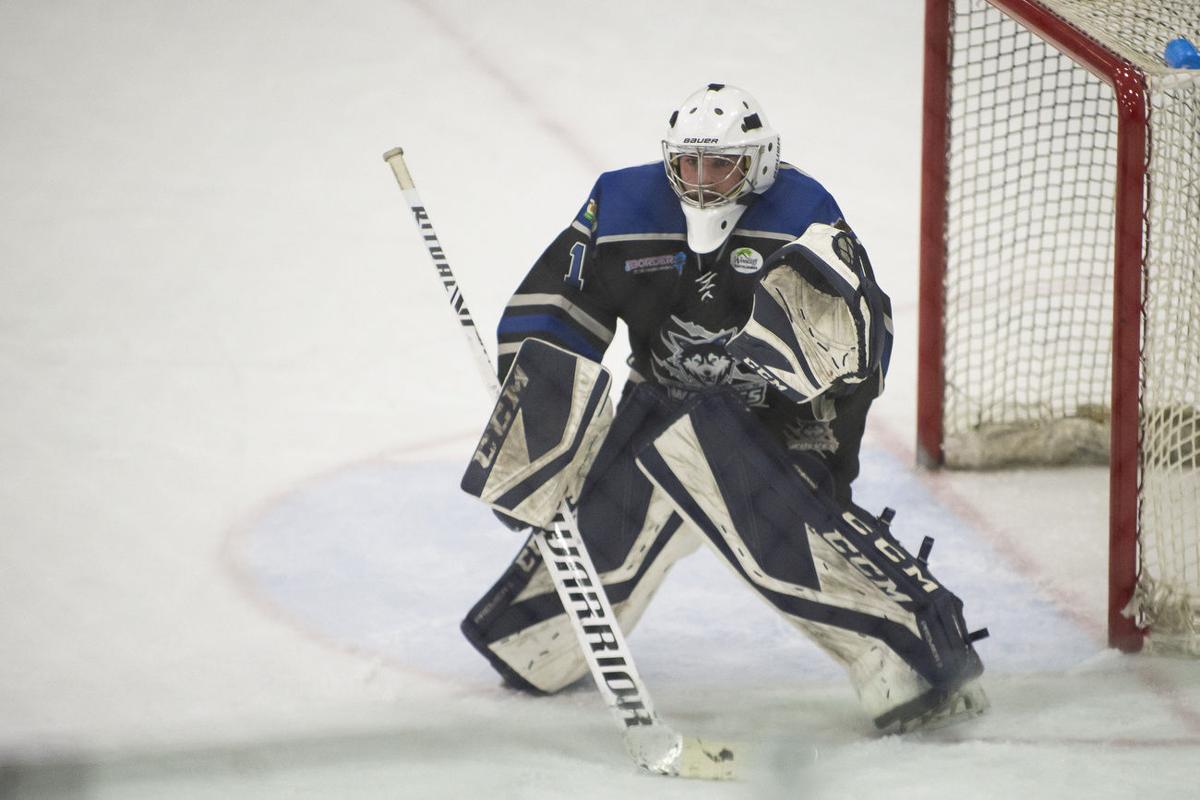 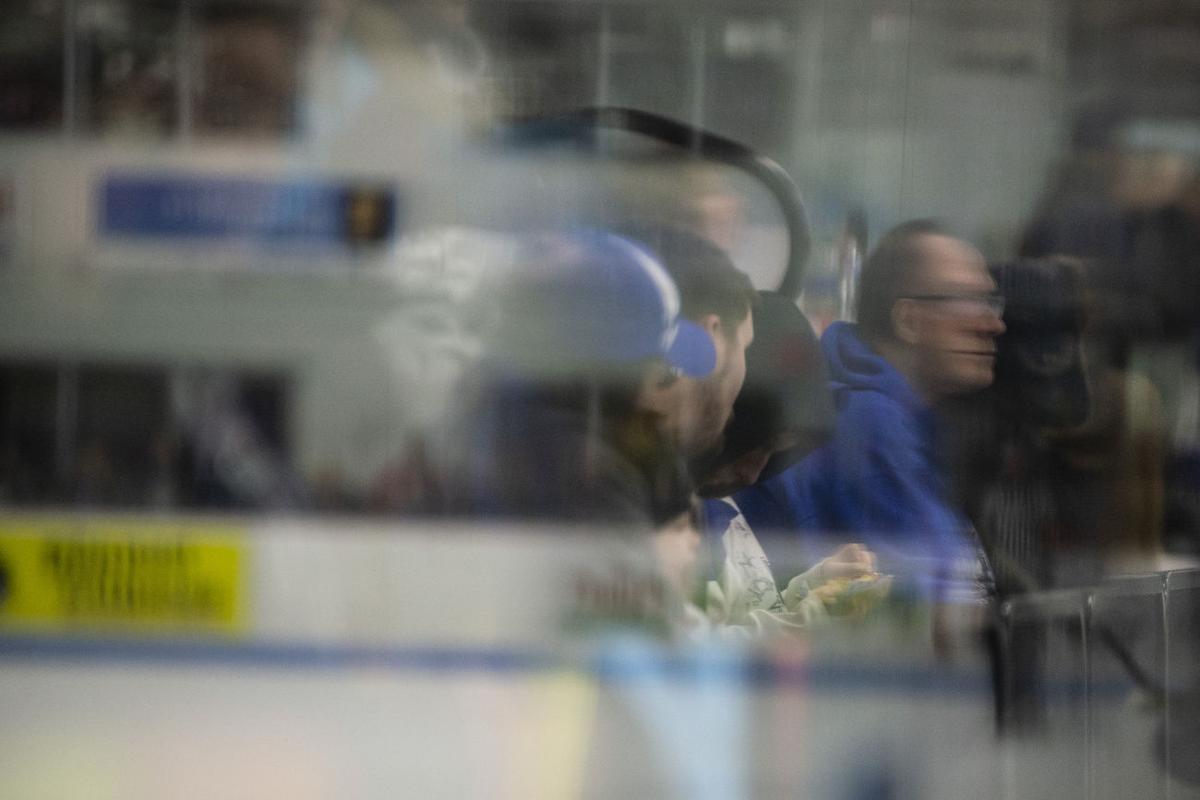 Fans watch players compete for the puck at center ice during the Wolves’ home game against the River Dragons on Saturday at Watertown Municipal Arena. Emil Lippe/Watertown Daily Times

Watertown forward Jamie Lukas looks at an official for a penalty call after taking a hit during Saturday’s game against Columbus at Watertown Municipal Arena. Emil Lippe/Watertown Daily Times

Fans enter Watertown Municipal Arena prior to the start of the Watertown Wolves’ home game against the Columbus River Dragons on Saturday. Emil Lippe/Watertown Daily Times

Watertown defenseman Kyle Powell signs autographs for fans prior to the start of the Wolves’ home game against the Columbus River Dragons on Saturday at Watertown Municipal Arena. Emil Lippe/Watertown Daily Times

Fans watch players compete for the puck at center ice during the Wolves’ home game against the River Dragons on Saturday at Watertown Municipal Arena. Emil Lippe/Watertown Daily Times

Despite an encouraging start, the game quickly went south once again for the Wolves against expansion Columbus as they were dealt the worst home loss of their season.

Former Wolves goalie Cody Karpinski made 41 saves to post the shutout and the River Dragons broke open a close game early in the second period en route to recording a 7-0 rout of Watertown in front of a crowd of 750 at Watertown Municipal Arena.

“It’s good for our team to get these two wins,” said Karpinski, who played for Watertown for parts of the last two seasons. “Especially on the road, road games are always tougher and to be able to sneak on out of here with these wins, that’s huge in the standings for us.”

Despite nearly dominating play for most of the opening period, Watertown was unable to break through offensively against Columbus and Karpinski.

“It’s funny, because I said we had to come out and win the first period,” Watertown coach Paul MacLean said. “I thought we outplayed them in the first period and they got that late goal. When things aren’t going right and you can’t score, that makes it even tougher.”

While Columbus (13-16) swept the two-game set, Watertown (15-14) was dealt its fifth loss in its past six games in the Federal Prospects Hockey League.

“It’s a tough pill to swallow, in the two games we gave up 14 goals at home,” Watertown assistant captain and defenseman Kyle Powell said. “We lost both and it’s not looking good right now, but we’ve just got to turn it around. There’s always ups and downs, but we’ve got to figure this out soon.”

Despite outshooting Columbus, 22-15 in the first period, Watertown trailed 1-0 on former Wolves’ forward Cameron Dimmitt’s goal with 16.6 seconds remaining in the frame.

“We came out strong, but we didn’t finish things the way we wanted, clearly,” Powell said. “But all you can do on this is take out the small positive things. We’ve just got to regroup, it’s a short turnaround and we play here Wednesday night at home.”

“We pretty much did what we wanted to do in the first period, but then the wheels just kind of fell off,” MacLean said.

Also in the opening period, the Wolves went scoreless on a pair of power plays, including 57 seconds of a 5-on-3 man advantage.

“It’s just like (Friday) night, actually it’s the same thing,” Watertown team captain Tyler Gjurich said. “The first 10 minutes of each first period the last two nights we came out strong and I honestly don’t know what happened. We had the 5-on-3, we didn’t score and basically gave them momentum.”

Dimmitt, who was traded to the River Dragons earlier this season, fired in a pass from the right from former Wolves’ forward CJ Hayes on a partial breakaway for a 1-0 lead.

This would ultimately be the only goal needed for Karpinski, who improved to 2-0 with Columbus, with both wins coming against Watertown.

The River Dragons then cashed in on Watertown’s third power play of the night as MJ Graham beat goalie Jeremy Pominville from the right faceoff circle 8:40 into the second period for a 2-0 lead, with former Wolves player Yianni Liarakos assisting.

Yet another former Watertown player, Tim Santopoalo, provided Columbus with a 3-0 advantage on his goal with 8:13 left in the period.

The onslaught continued as Chase Fallis finished off a give-and-go with Graham with 4:34 left in the period for a 4-0 lead.

Karpinski went on to stop all five shots he faced in the second period and 14 more in the third.

“I feel pretty good, a little tired, I guess,” said Karpinski, who recorded his first win of the season for Columbus in a 5-4 overtime victory over Watertown on Jan. 4 in Georgia. “I think overall we played much better as a team than the first time I faced them (the Wolves) this season. Especially winning here, I’m going to be close to some of the guys that I played with here, and especially the fans here.”

Hayes and Graham each added a goal in the third period as the River Dragons built a 6-0 advantage and Parker Moskal scored to complete the rout.

“It’s tough when you’re not playing with all your guys,” MacLean said. “But we still have enough guys in the lineup where we should be able to compete as a team.”

Pominville was chased by Columbus for the second straight night, this time yielding seven goals on 39 shots faced.

Columbus has won five of its past six games, including three against the Wolves.

“The last two weeks, we’ve been kind of trending in the right direction,” Karpinski said. “We’ve been making a little push here and there, but now things are really starting to come together and guys are all believing in each other.”

Nearing the midway mark of their 60-game regular season, the Wolves still occupy second place in the Eastern Division.

“I’m not a screamer or a yeller, but you really have to get past this,” MacLean said. “It’s kind of like a psyche or a mental thing that you have to overcome and move forward.”

Second place Watertown will host third-place and division rival Elmira at 7:30 p.m. on Wednesday at the Fairgrounds Arena.

“We’re about halfway right now,” Powell said. “This is the turning point of the season, we’ve got the playoffs ahead of us, but if we don’t start winning games we’re not going to be in the playoffs.”

n NOTES: Columbus won the season series with Watertown, 3-1. ... Dimmitt played the past two seasons with Watertown, including skating on the FHL championship team in the 2016-17 campaign. ... Wolves forward Justin Coachman was dealt a one-game suspension from the league after he received a game misconduct on Friday after he jumped in as a third man in to a fight in the third period. ... Hayes now has an eight-game goal streak for Columbus.