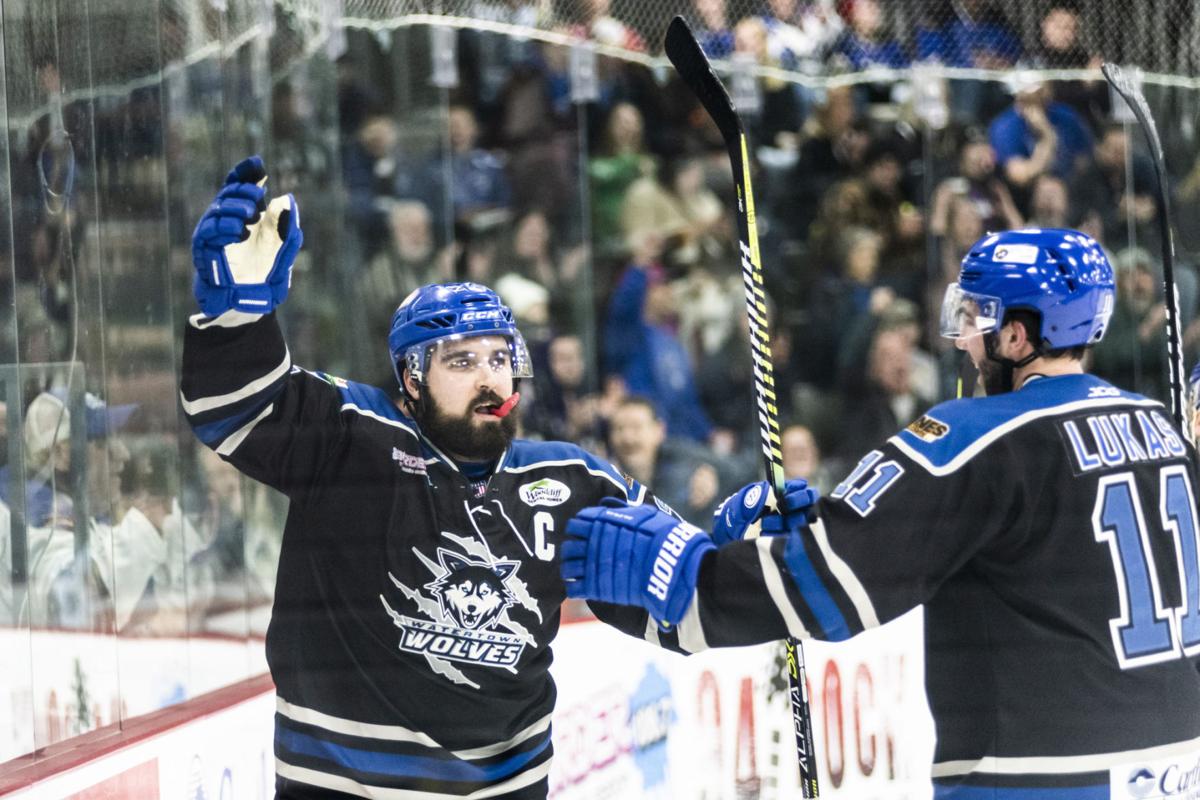 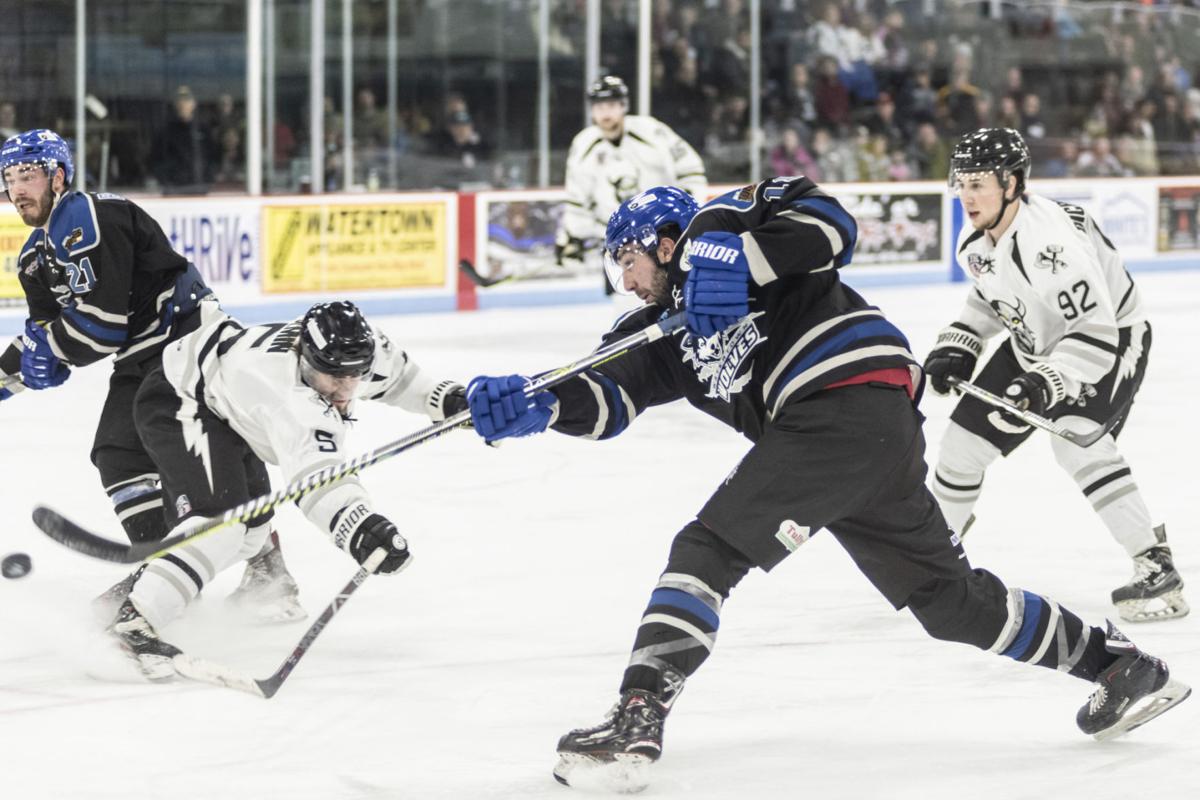 The Wolves’ Jamie Lukas fires a shot past the Thunder’s Demin Evgenii on Saturday in Watertown. Julia Hopkins/Watertown Daily Times 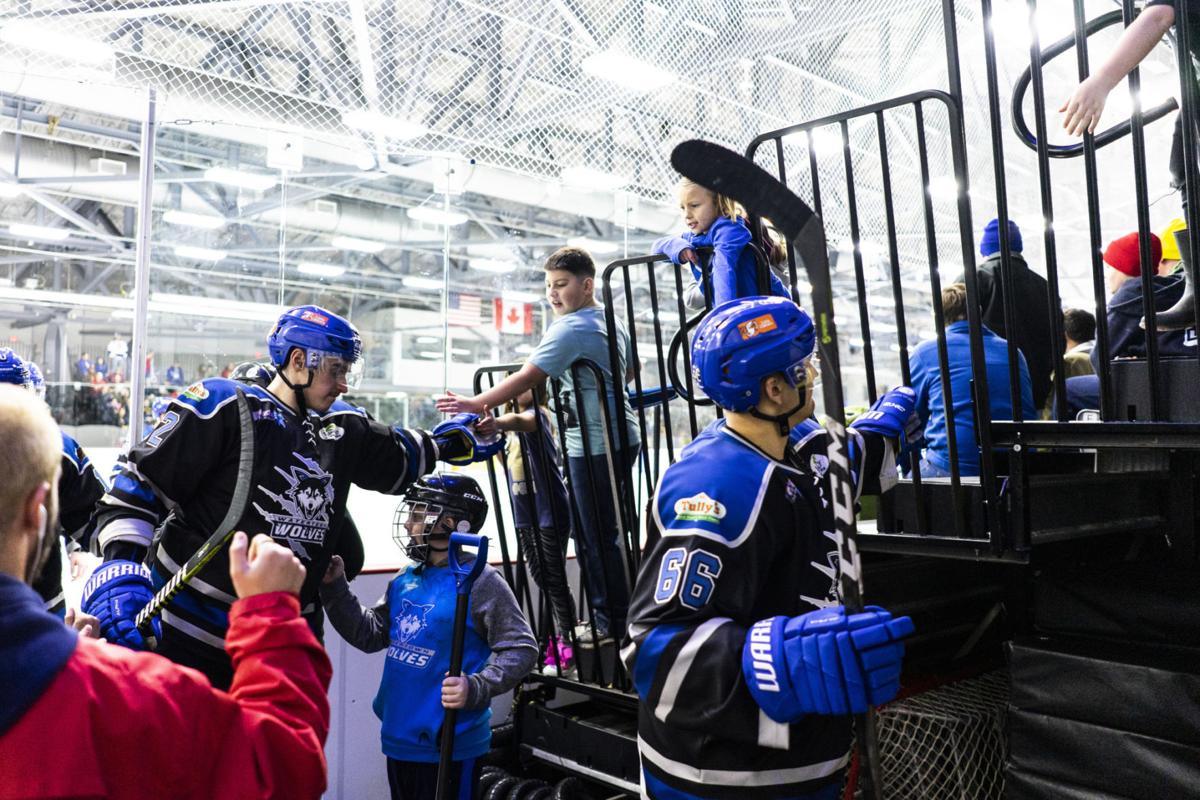 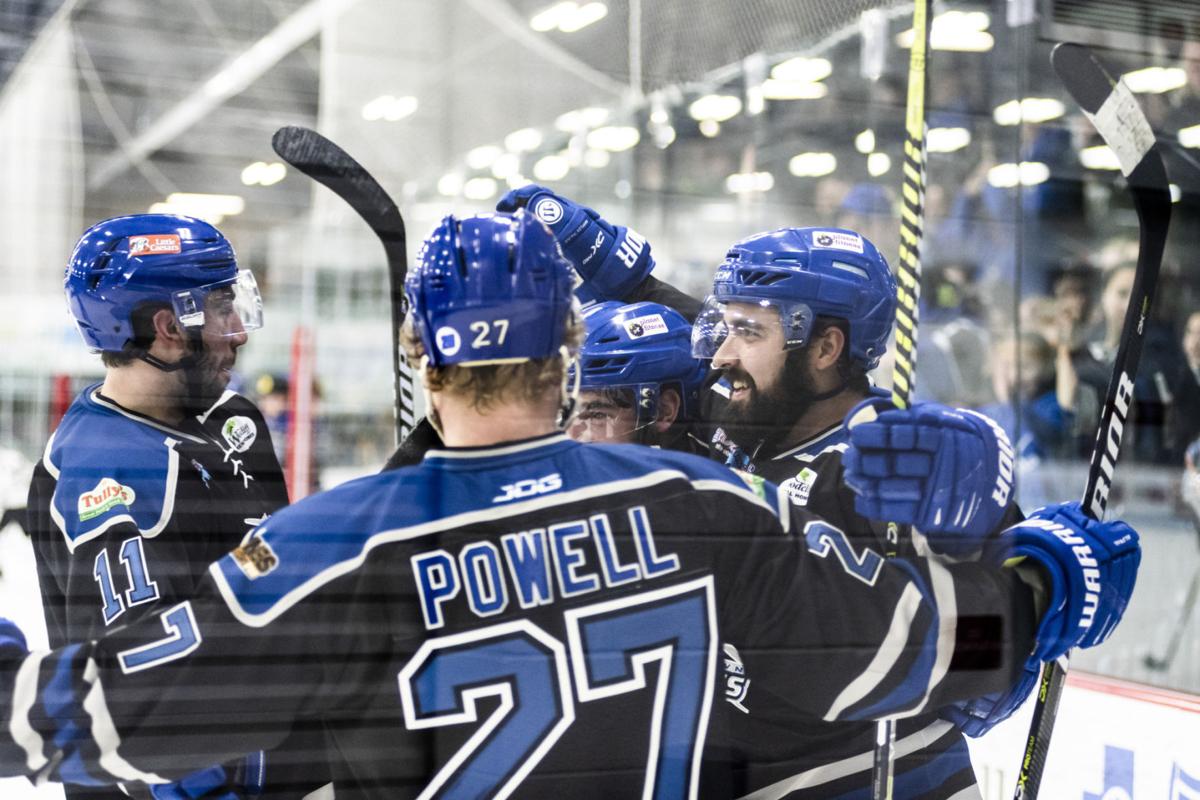 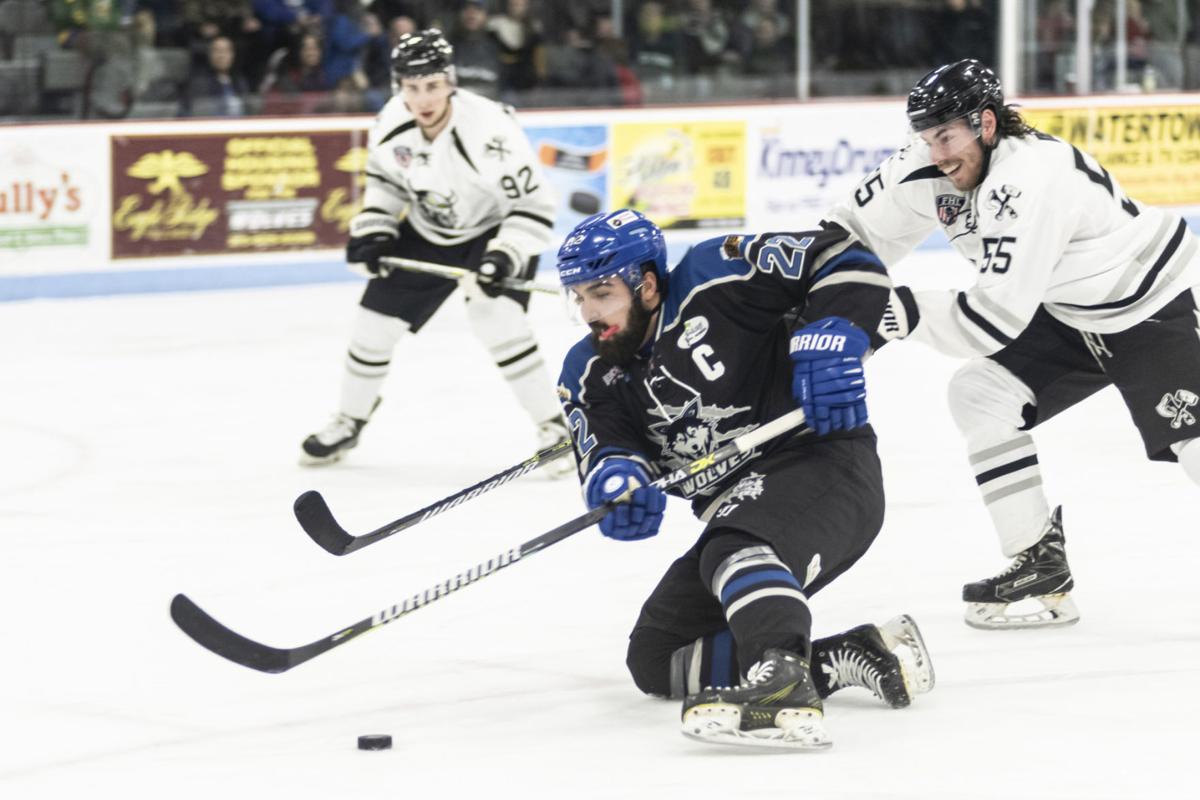 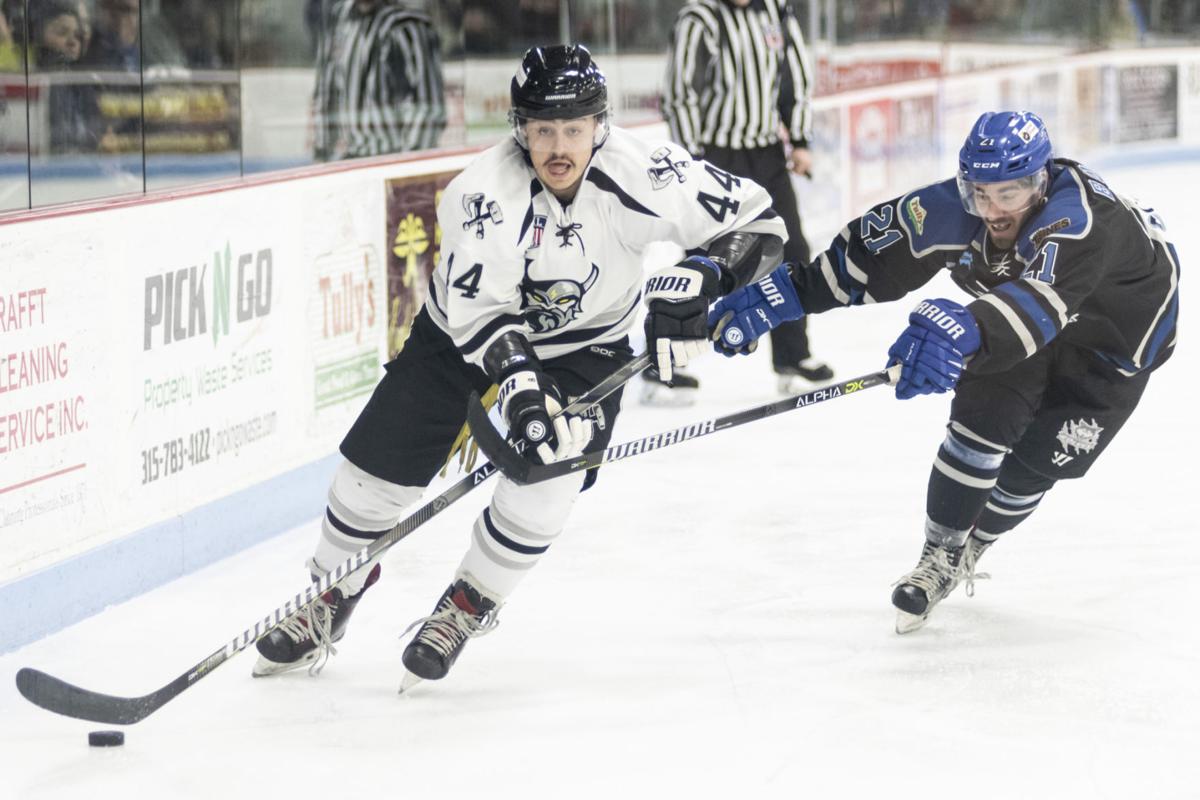 The Wolves’ Deric Boudreau, right, reaches for the puck against the Thunder’s Robin Vortanov on Saturday in Watertown. Julia Hopkins/Watertown Daily Times 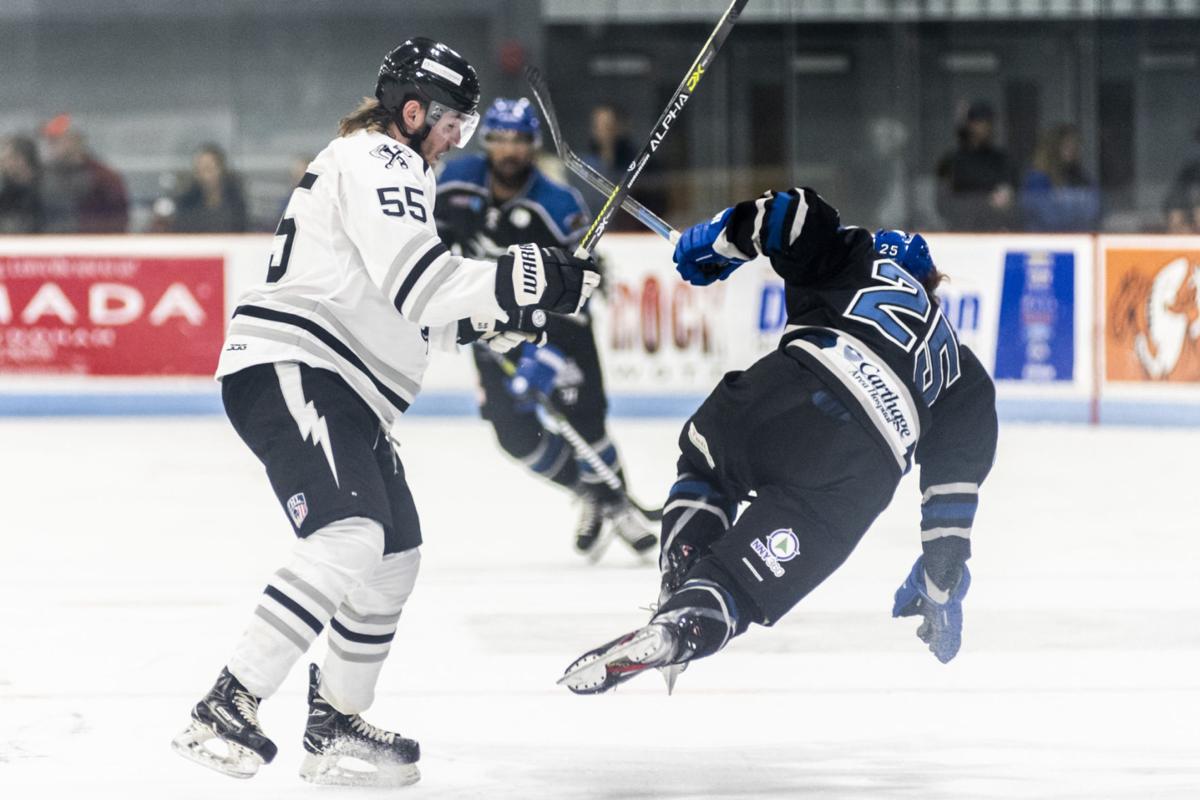 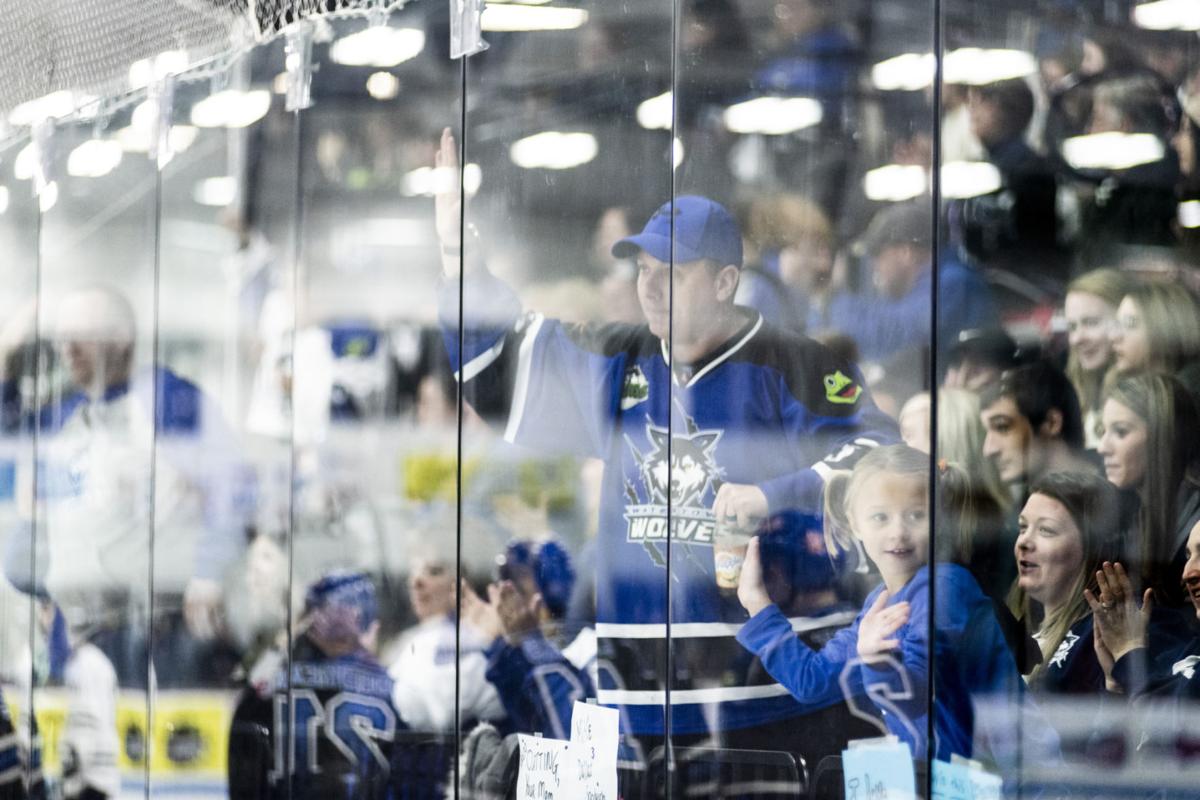 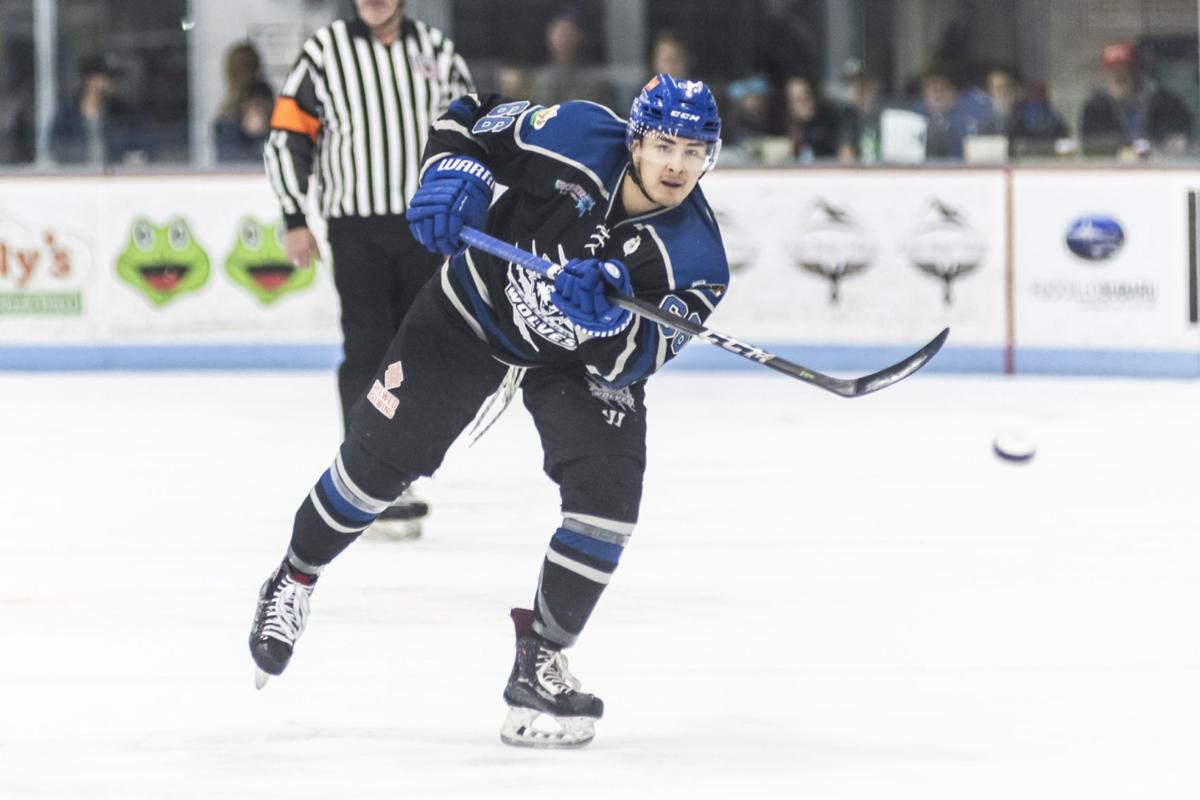 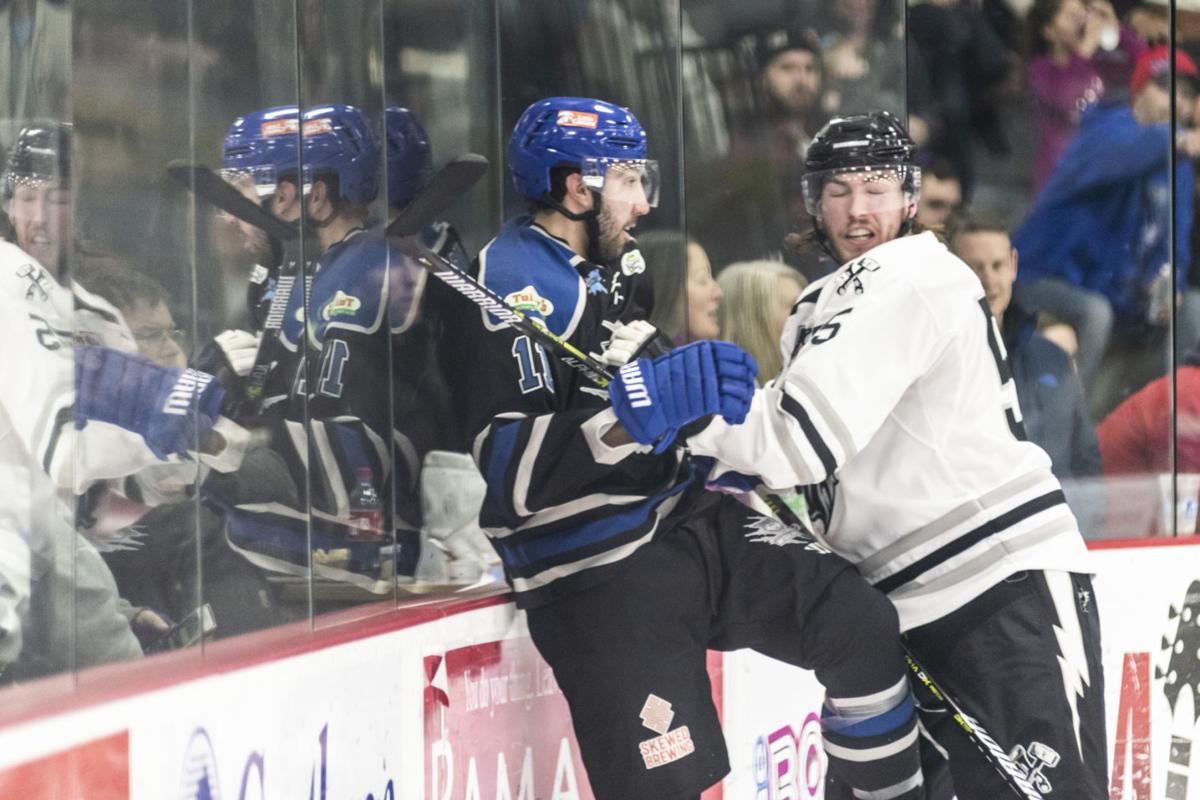 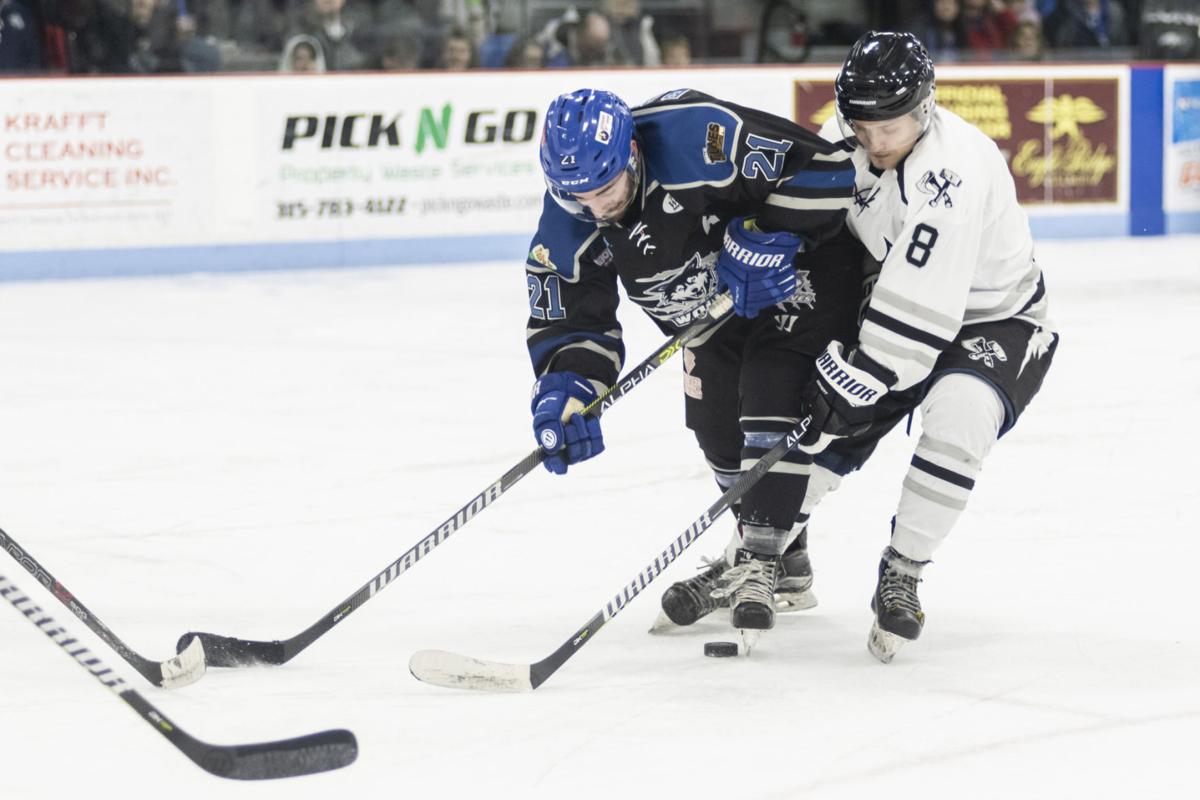 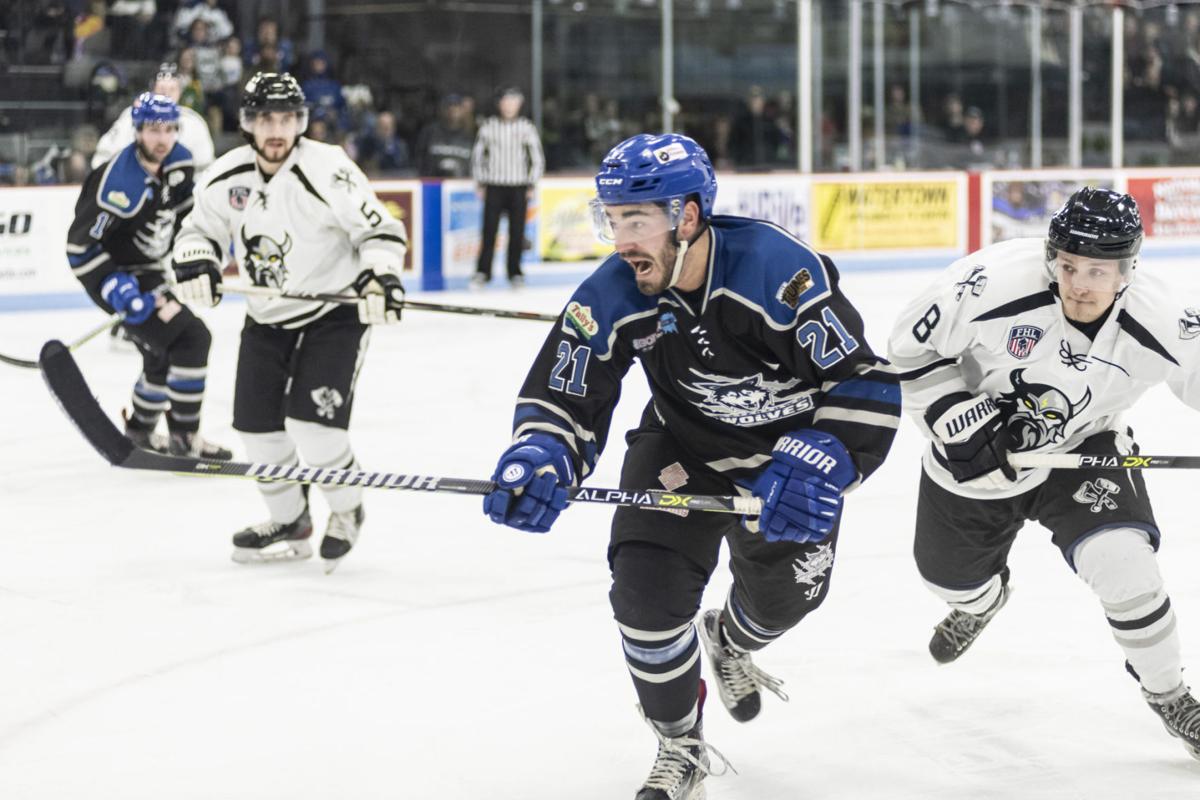 The Wolves’ Jamie Lukas fires a shot past the Thunder’s Demin Evgenii on Saturday in Watertown. Julia Hopkins/Watertown Daily Times

The Wolves’ Deric Boudreau, right, reaches for the puck against the Thunder’s Robin Vortanov on Saturday in Watertown. Julia Hopkins/Watertown Daily Times

And as the team’s top-scoring unit goes, the Wolves as a whole have followed as they continue their early-season success.

Led by Tyler Gjurich, the line, which also includes Deric Boudreau and Jamie Lukas, had a hand in four of the team’s five goals on the night as Watertown downed the Delaware Thunder, 5-1, on Saturday night in a Federal Hockey League game before a turnout of 950 at Watertown Municipal Arena.

Gjurich scored two goals and assisted on two others to help spark the Wolves (11-2) to their third consecutive win.

“It’s great right now, we’re having fun as a team,” Gjurich said. “We’re playing with a lot of confidence and it’s paying off.”

Lukas scored a goal and Boudreau generated two assists for the Wolves, who have won 11 of their past 12 games.

“I think we’re really playing together as a team,” Boudreau said. “Everyone’s buying in, everyone’s playing their role — we’ve got secondary scoring tonight and yesterday, which was huge.”

Watertown rookie goalie Jeremy Pominville made 41 saves, including making 15 stops in the third period, to record the win.

Leading 1-0 through the first period on a Gjurich goal, the Wolves struck for three goals within a span of 1 minute and 23 seconds to break the game open.

“It’s good, I’ve been playing with Deric for two years now and we now we have Lukas, who can open up some space,” said Gjurich, who is riding a nine-game point streak, in which he’s totaled 12 goals and eight assists. “I think we have a lot of balance on our line. We go out there and work hard and try and score as much as we can. Everyone does their job, which is the big thing on our team.”

After Lukas knocked in a Gjurich rebound with 6:11 left in the period, Dallas Desjarlais followed with a goal, which was assisted by his brother Michael Desjarlais, only 36 seconds later.

Gjurich followed with his second goal of the night, which was set up by Boudreau, with 4:47 left in the period, for a 4-0 Watertown lead.

“They continue to play well for us,” Watertown coach Paul MacLean said of the Wolves’ top line. “Tyler is always scoring for us and we’ve really got some balance there. Deric has also brought some leadership, he’s now an assistant captain for us and Jamie has done a good job on that line.”

After Delaware’s Eric Masters scored a goal with 3:35 remaining in the second period, Gjurich then assisted on Cameron Dimmitt’s power-play goal with 3:31 left in the game.

“It always takes a little bit to find that chemistry, but I think this weekend helped a lot,” said Boudreau, who extended his point streak to 13 games, as he’s generated at least a point in each game for the Wolves this season, totaling 10 goals and 13 assists. “We’ve been working with Jamie in practice every day, because we’re used to having (Lane) King on that left side. But we love playing with him and it’s working. So don’t change what works, right?”

“Our power play is rolling,” Boudreau said. “We made a little bit of an adjustment before this game, so that worked out. If we can keep that momentum going to Elmira, that’s the biggest thing right now.”

Gjurich provided the Wolves with a 1-0 advantage with his power-play goal as he finished off a feed from Boudreau, scoring from the left faceoff circle with 4:51 left in the first period.

“We’re just working hard every game so we can get better,” Gjurich said. “We just keep playing well as a team as well.”

Goalie Aaron Taylor stopped 28 of 32 shots faced over the first two periods in taking the loss for expansion Delaware (2-10), which was defeated by Watertown, 5-2, on Friday in the first meeting between the two teams.

The Wolves now prepare for two games next Friday and Saturday at rival Elmira, which defeated Watertown in the playoffs last year.

“Those are going to be really big tests for us,” said MacLean, who served as an assistant coach with Elmira last season. “So we’re looking forward to that.”

n NOTES: Lukas has scored five goals in his past six games, including a goal in each of his last three games. ... Pominville improved to 8-2 on the season. ... Gjurich also leads the league in power-play goals with eight. ... The Wolves improved to 6-2 at home this season. They are also 5-0 on the road. ... The Wolves will next play Delaware when they host the Thunder at 7:30 p.m. on Dec. 27.