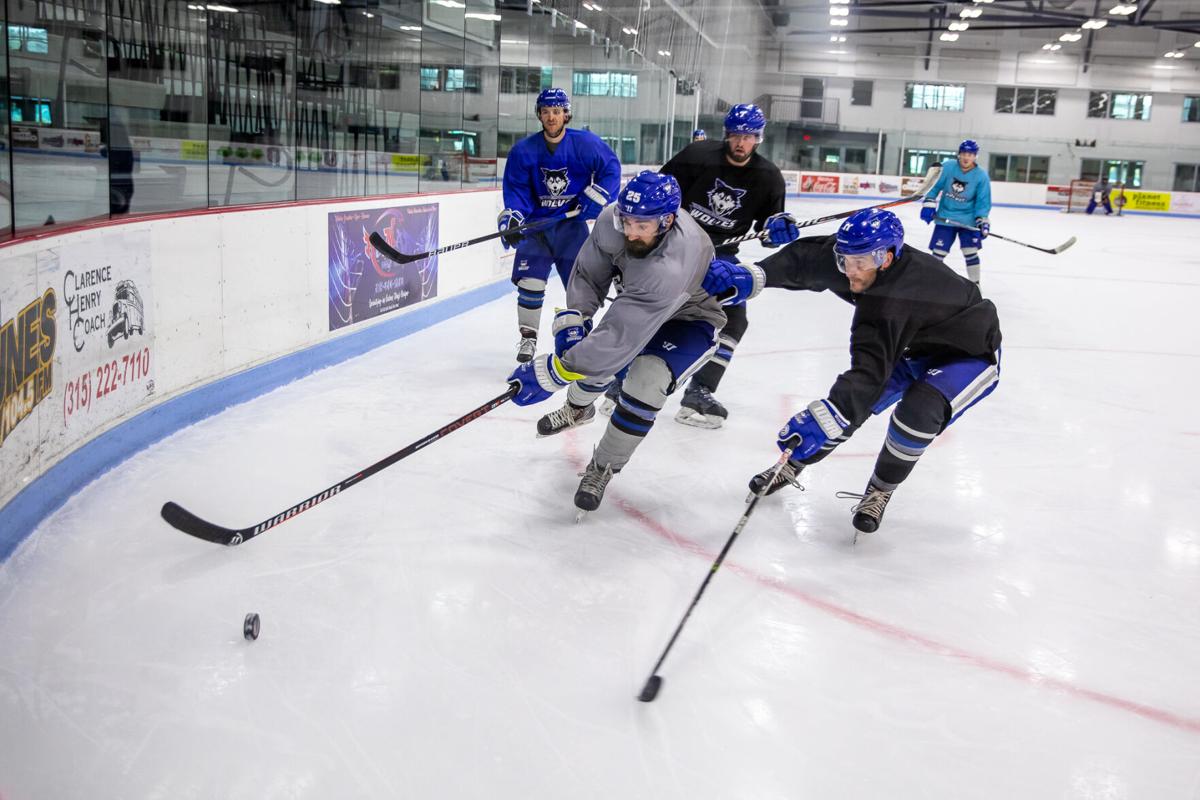 The Wolves practice Thursday ahead of tonight’s season opener against Binghamton at the Watertown Municipal Arena. Kara Dry/Watertown Daily Times 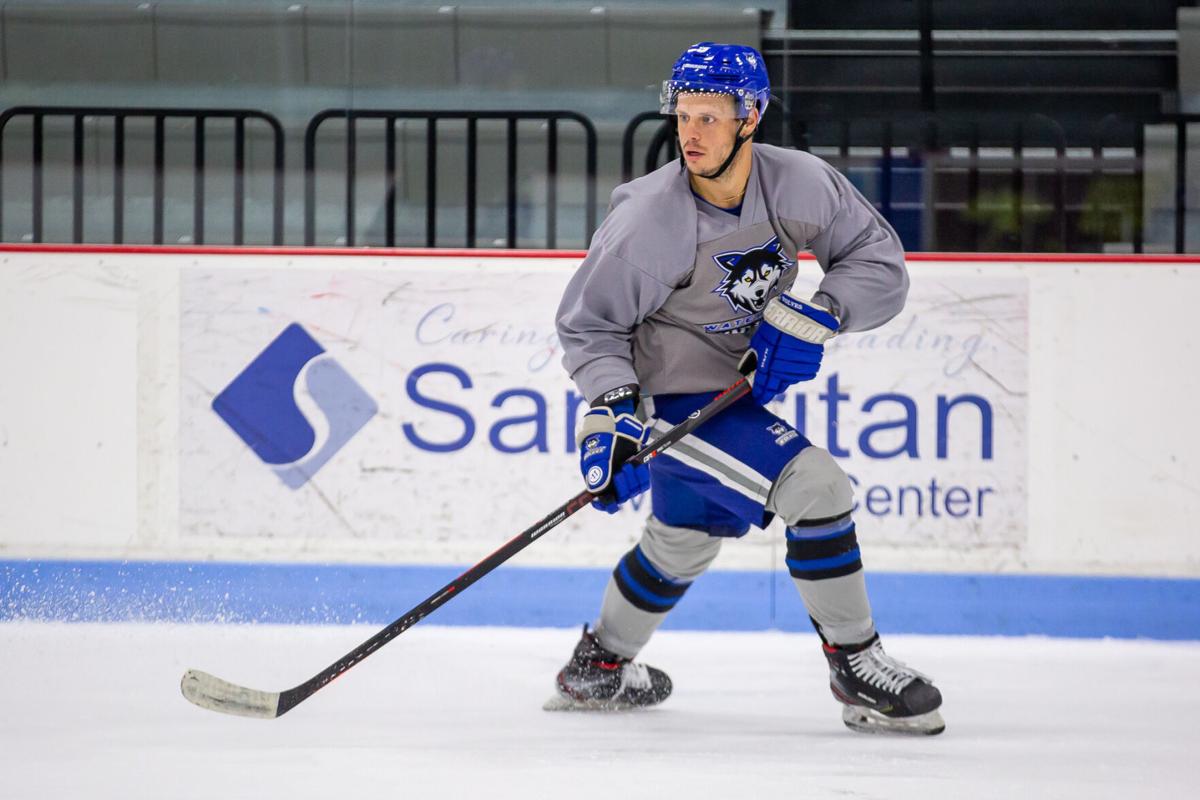 The Wolves’ Lane King practices with the team ahead of tonight’s season opener against Binghamton at the Watertown Municipal Arena. Kara Dry/Watertown Daily Times 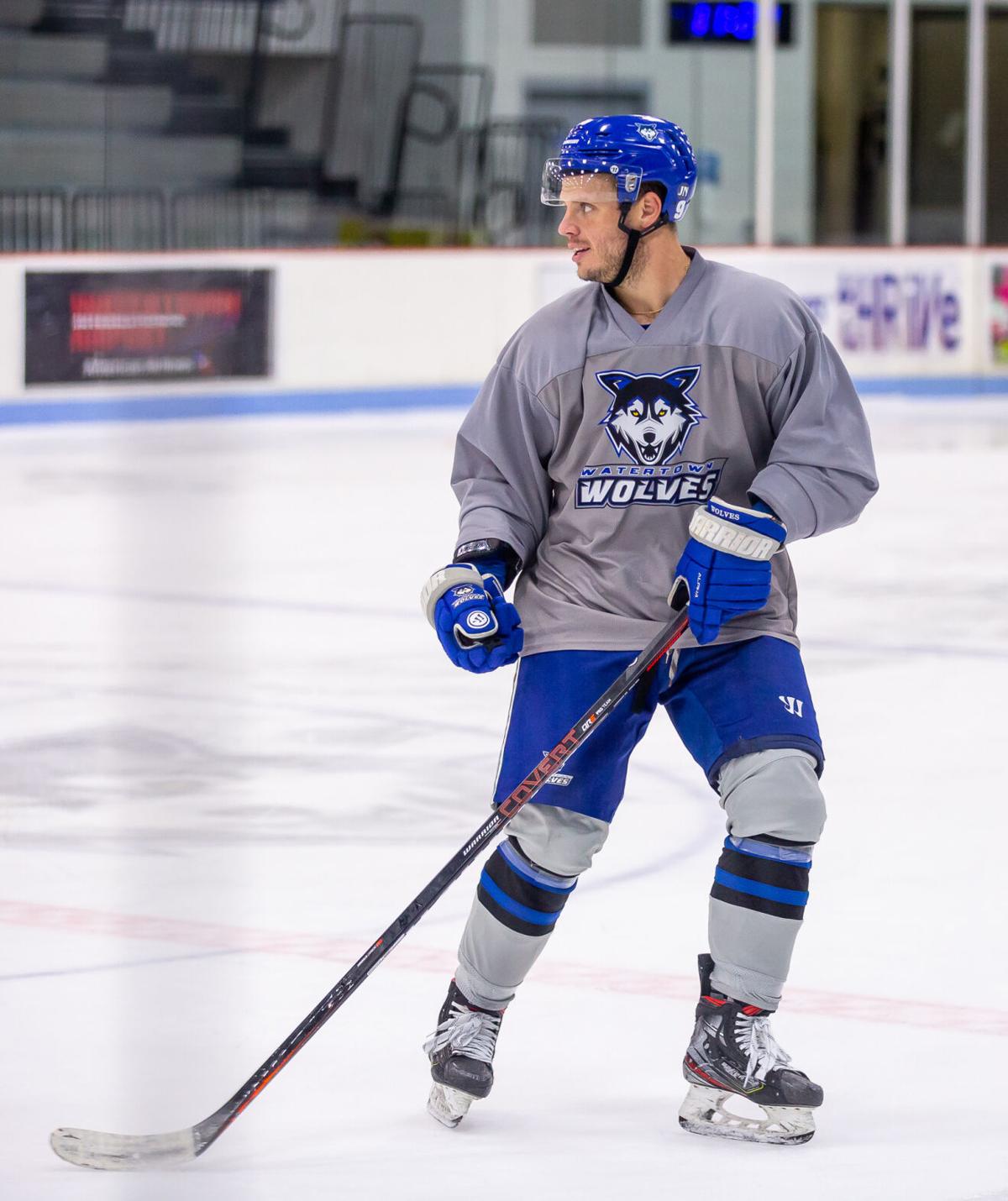 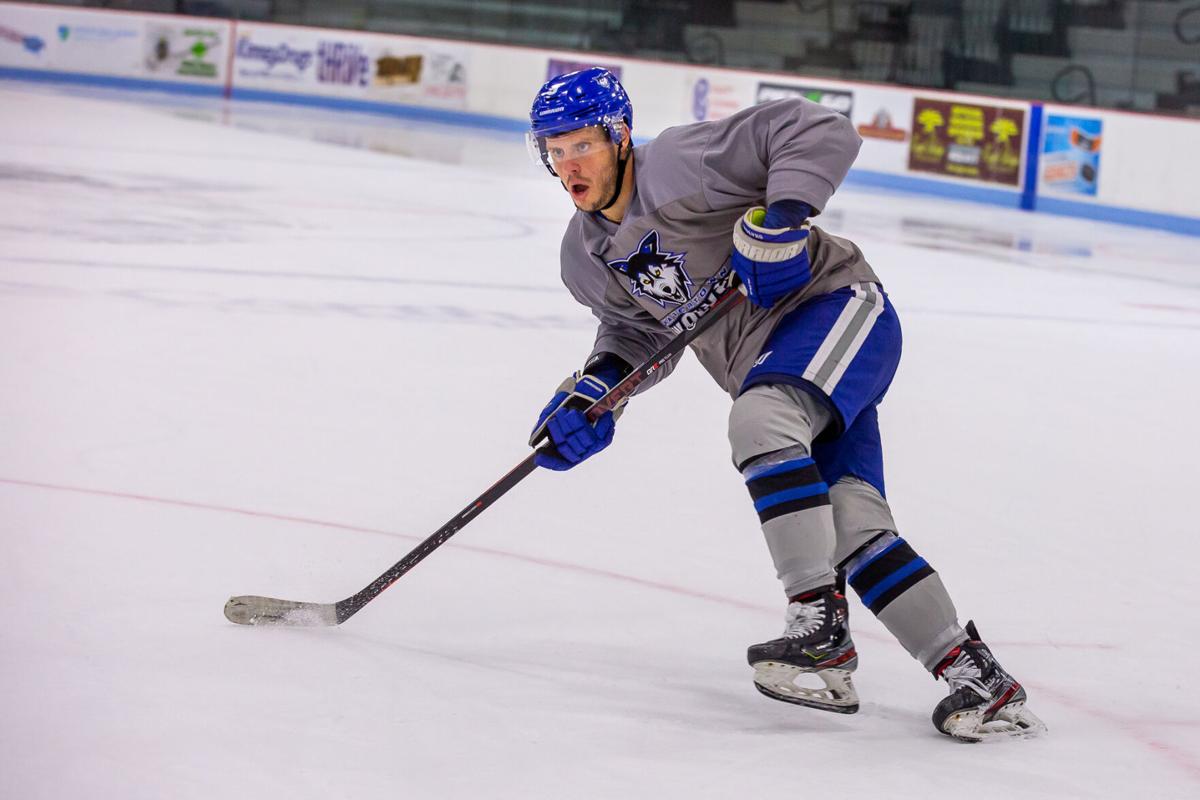 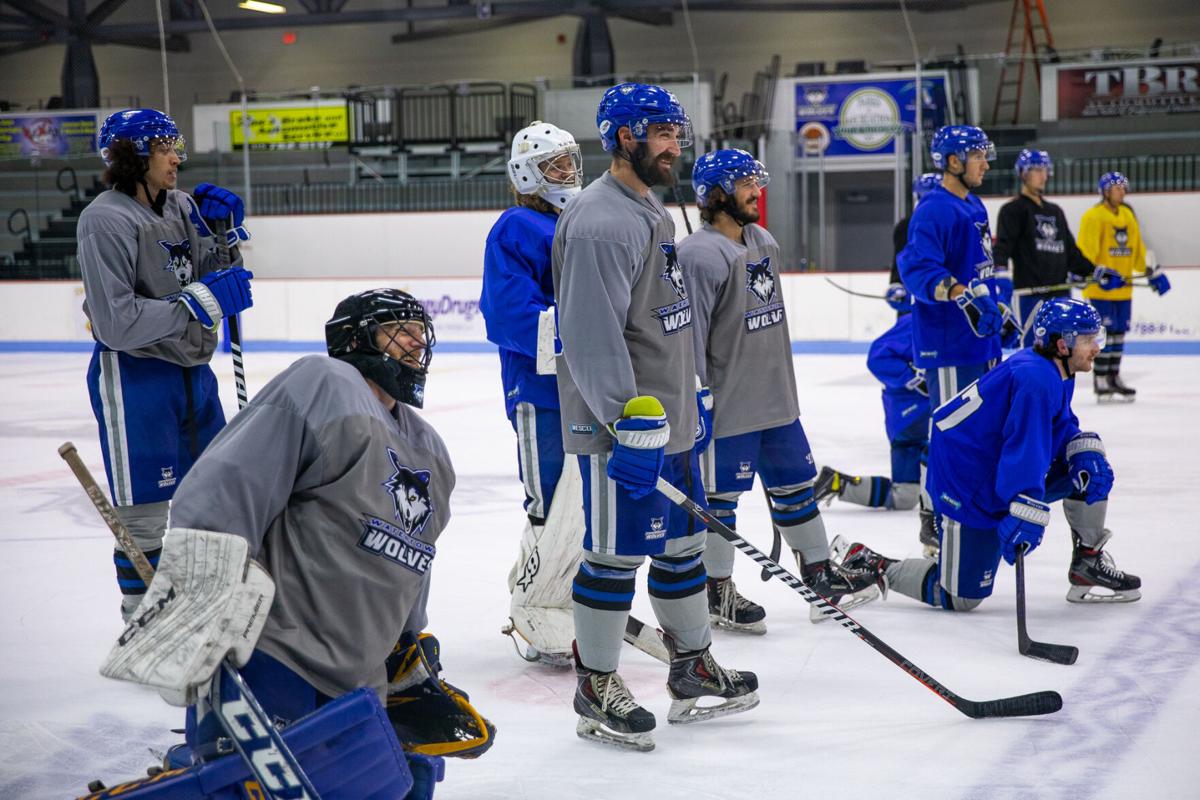 The Wolves practice Thursday ahead of tonight’s season opener against Binghamton at the Watertown Municipal Arena. Kara Dry/Watertown Daily Times

The Wolves’ Lane King practices with the team ahead of tonight’s season opener against Binghamton at the Watertown Municipal Arena. Kara Dry/Watertown Daily Times

WATERTOWN — Lane King and several of his Watertown Wolves teammates have been waiting for this moment for well over a year now.

Hockey season will return in earnest tonight when the Wolves will host the Binghamton Black Bears at 7:30 p.m. in a Federal Prospects Hockey League game at Watertown Municipal Arena.

“It’s great to be back in Watertown,” King, a forward, said. “We can’t wait to get this season going.”

This will mark the return of hockey fans to the arena and perhaps a sense of normalcy for the Watertown franchise after months of uncertainty because of the pandemic.

“But now it’s behind us now, we have a full season ahead of us with fans and everything,” King said. “It’s going to be nice having the building back to normal. Even when we had an exhibition game last (season), there were no fans.”

Wolves veteran players such as defenseman Justin Coachman say the team thrives off the energy of the home crowd when the arena is packed.

“It’s good, I’m ready to play a whole season we haven’t been able to play hockey for almost two years now,” Coachman said. “You always go into the season ready to play and ready to win, and to have it pulled out from underneath us, it sucked. But we’re here, we’re working even harder to win a championship.”

“We have really good fans here in Watertown, so we try and use them to our advantage,” King said. “After having an empty building, you can get that extra momentum sometimes with a full house.”

“We’ve got a lot of new faces, we don’t have a ton of returners,” King said. “But when you have a guy like J-Mac leading the way for us, it’s kind of hard not to fall in line with all he’s done and the type of player he is.

“So personally, I’m looking forward to playing with him a bit, with the way he plays his game, it’s nice to be on his team for a change.”

MacDonald, who previously played with the Thousand Islands Privateers and the Wolves when they won their first league title in 2015, was also to have been Watertown team captain last season.

“It’s exciting to get going here,” MacDonald said. “But there’s a long season ahead of us. We’re ready for a good, hard-fought battle Friday night and we’ll bring it.”

After the pandemic wiped out the league’s playoffs in the spring of 2020, it also played havoc with last season.

“I think last year was tough for everyone,” King said. “So there was a lot of uncertainty, I think we were all last year just really appreciative when we did get to camp and when we did get some exhibition games. So I think that’s what made it even harder when it ended.”

Watertown was set to play an abbreviated campaign starting in February, but it ended up as a lost season.

With the Wolves and the Elmira Enforcers at last set for a season opener in early February, a pregame, off-ice incident between the two teams occurred hours before and after the Enforcers failed to take the ice for pregame warmups, the Wolves were awarded a forfeit win.

“It was kind of crazy,” King said. “I think with what happened with COVID and everything, it wasn’t going to work out. For our owners, it didn’t make a lot of sense and I get that, too.”

This also spoiled the return of Brent Clarke to Watertown, this time as head coach.

“It was unfortunate,” Clarke recalled. “But you have to move on and move forward.”

Clarke is also back and has put together a balanced group of returners and newcomers.

“I like the group that we have,” Clarke said. “I didn’t know what I was going to get at first with all the guys called up, we have 20-plus players in the (SPHL), but we had to re-recruit and I kind of like what we’re building here. We’re slowly getting less bodies out and more bodies in and getting a little bit bigger, because we started out being really small and now we’re middle of the pack. I like it so far.”

King is one of a few of the returnees, backed with an abundance of newcomers. Many are young, including more than 10 rookies.

“I like the talent, a lot of people have been impressing me,” Clarke said. “We’ve got two guys right out of free-agent camp that ended up panning out and we’re lucky to have them. They just want it more, they want it more than some of these guys that may have played some where before.”

“Some guys can bang the body around and are not afraid to hit,” Coachman said, “we’re just going to play a tough style of hockey, that’s what Clarkie likes.”

A Long Island native, DiConstanzo has already impressed the Wolves staff during training camp and at the team’s exhibition game against Binghamton last week.

“He’s a centerman, he’s a good young kid,” MacDonald said of DiConstanzo. “He has good talent, I like having him on the power play with me. We’re working on a few things with him to hopefully pot a few more goals. He had a good preseason game.”

Other newcomers include forwards Michael Mann and Nolan Slachetka and defensemen Evan Gorman and Troy Taylor.

“I’m really happy to be back,” King said. “Clarkie’s got a good group of guys here, it seems like. And obviously with COVID and everything this year, there’s going to be new guys coming in all the time.

“But the group we have right now is really good.”

The team practiced with three goalie this week leading up to the season opener, including Pennsylvania native Breandan Colgan.

“We have some skill and we are getting some bigger bodies in, which is really hard for a defenseman to play against,” MacDonald said. “So if they see big forwards coming down on them, big, strong and fast, it’s hard to contain them.”

“It’s the Federal League, so there’s always new faces,” Coachman said. “But they seem like a good group of guys, they’re working hard in practice, it will be good to see what we can bring on the ice (tonight).”

Expansionist Binghamton just happens to also be owned by Johansson. The league will be made up of seven teams this season with Elmira, which has been Watertown’s chief rival in past seasons, opting out of this season, perhaps to return next year.

“So it makes it even more exciting to be back and have it be more normal,” King said. “Not wearing masks to the rink, not having to do all these tests and stuff, just to get back to normal, it feels like normal life around here. The home opener should be pretty awesome.”