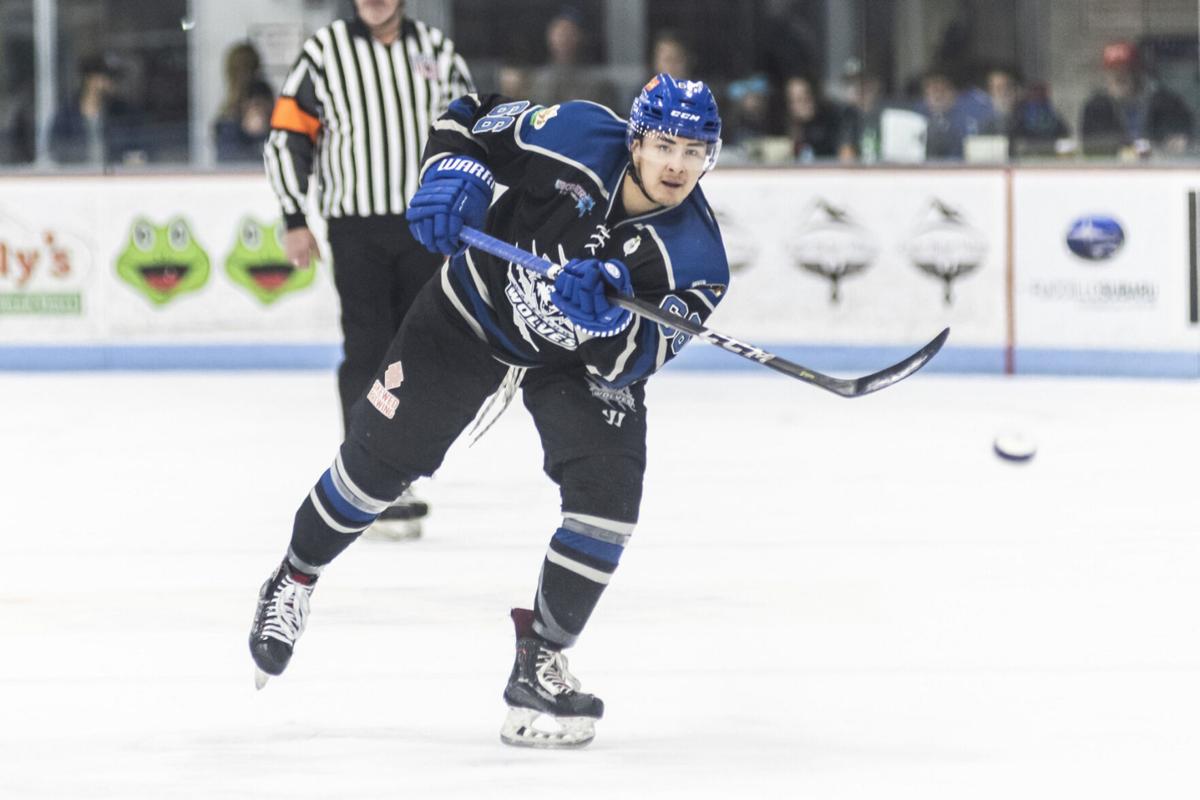 Defenseman Bryce Litke of the Watertown Wolves fires the puck up the ice during a Federal Prospects Hockey League game against the Delaware Thunder last season at Watertown Municipal Arena. Watertown Daily Times 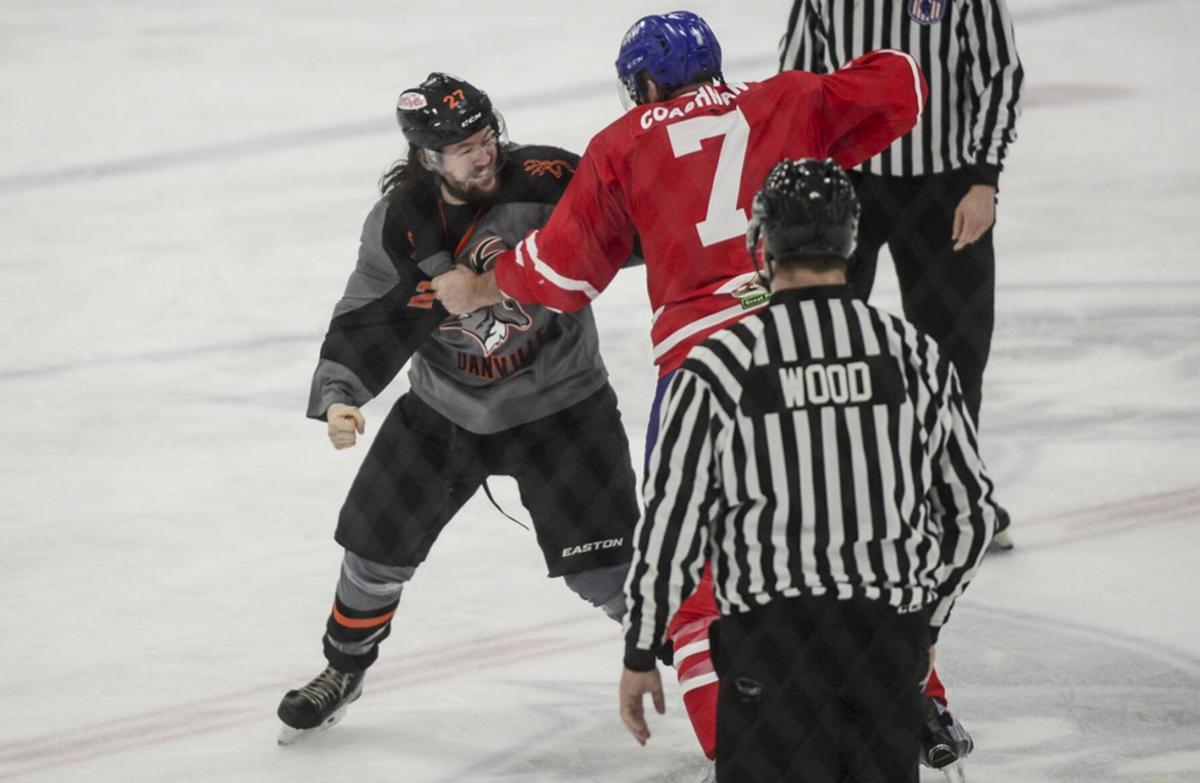 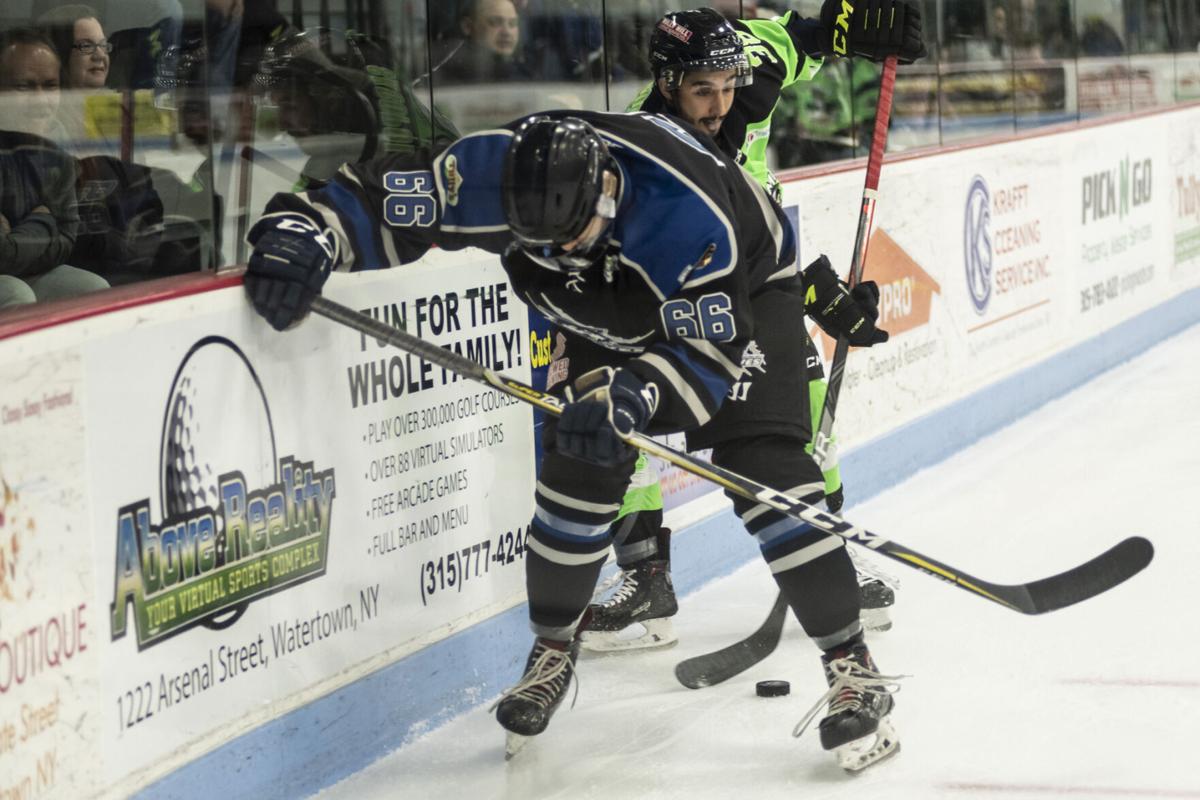 Defenseman Bryce Litke of the Watertown Wolves looks to play the puck during a Federal Prospects Hockey League exhibition game against the Elmira Enforcers on Oct. 19, 2019, at Watertown Municipal Arena. Watertown Daily Times

Defenseman Bryce Litke of the Watertown Wolves fires the puck up the ice during a Federal Prospects Hockey League game against the Delaware Thunder last season at Watertown Municipal Arena. Watertown Daily Times

Defenseman Bryce Litke of the Watertown Wolves looks to play the puck during a Federal Prospects Hockey League exhibition game against the Elmira Enforcers on Oct. 19, 2019, at Watertown Municipal Arena. Watertown Daily Times

Watertown Wolves owner Andreas Johansson remains optimistic there will be an upcoming hockey season for the team.

The question that remains is when, as the Federal Prospects Hockey League has yet to finalize a start date for the season, let alone a league schedule.

Johansson is one of eight league owners who hope their respective teams will indeed play a regular season at some point.

“We’re just trying to make the best of it and see where it leads us,” said Johansson, who purchased a majority share of the Wolves’ franchise in the spring.

In October, the FPHL announced a tentative opening date for the season Dec. 18 during the holiday season.

League commissioner Don Kirnan said league owners would meet some time in November to work out a plan, including a league-wide schedule.

A date for that meeting, which would be done by phone, still hasn’t been finalized, Johansson said on Friday.

“We have a call, Nov. 18 will be the next official (league) call when we’ll be discussing things,” Johansson said. “Right now, the start date is for Dec. 18, so we want to do the call a month ahead of date. And as of right now, Dec. 18 is still the start date, however, I think in my view if we’re being realistic, we’re probably looking at a little bit later, I mean January is probably more realistic when you look at it at this point.”

In another development, Johansson confirmed that the Wolves’ pro-placement camp, scheduled for Nov. 18-20 at Watertown Municipal Arena, has been canceled by the team.

But Johansson continues to look ahead, although uncertainty surrounding the coronavirus pandemic and how it affects running a minor-league hockey team continues to exist.

While the league is hopeful to open the season in the third week of December, which would be a week before Christmas, there’s the possibility the start date may be again pushed back, this time into January.

“We’re still aiming for Dec. 18, but obviously we’re also aware that every day that goes by, you get a little bit closer,” Johansson said. “And is it realistic right now to say we’re going to play in December with no fans and with restrictions on movement between states? I mean, probably not, I don’t want to lie and tell people ‘hey, come on down and watch us before Christmas.’ Because in my view, it’s going to be difficult to pull that off.”

The ECHL plans a split start to its season, with 13 teams opening up Dec. 11, with the remainder starting Jan. 15.

Also, the Southern Professional Hockey League, which currently plans to open its season Dec. 26, has trimmed its teams to five for the upcoming season, opening up further talent that could find its way to the FPHL.

“That’s probably as much as we know right now,” Johansson said. “Like we’re all trying to get this going, but right now it’s kind of out of our hands. I mean, we’d play tomorrow if we were allowed to, the team’s ready, the guys want to play, we just need some direction I guess from the state, really, to ask them what we can do and when we can do it.”

The Wolves’ pro-placement camp was still on schedule to be held after it was canceled by the team earlier this week.

The three-day camp was called off because of concerns about new state COVID-19 guidelines in holding public events.

“We pretty much had to cancel that one just because the vast majority of guys were coming in from outside of New York state,” Johansson said. “And with the new kind of quarantine thing, they have to test in their home state, come in and spend three days in quarantine and then test again. So for most of these guys, it’s not really economical to spend a couple hundred dollars just in hotel stays and COVID tests.”

Johansson said the team wanted to take a cautious approach to holding camp, a mindset it will have to maintain in the future as well.

“And we always knew there would be a risk that this would happen because a lot of guys wanted to come, but their travel was pretty limited,” he said. “For guys to just get up there, it’s just more hassle for them to come in. Plus while I’m sure we’d be able to run the camp, it just gets a little more complicated with keeping track and making sure everybody does their test the way their supposed to do it and don’t bring in any infections. So we thought it would just be safer to cancel it at this point.”

While the camp may have yielded some players to participate in the team’s main training camp in December, the Wolves aren’t short on players for this camp.

“But is disappointing,” Johansson said of the pro-placement camp. “Before I think it went by state and you had to certain things, but they make it a little bit harder and there isn’t really any guidance as to what actually applies to sports teams. And if we had a game tomorrow, could we play it? Or would the opponent have to stay for four days before we play the game or would we have to quarantine for four days after going to an away game?

“These are all the questions right now that we have no real knowledge, because I don’t think there’s any real directive out there, there’s no pro sports going on right now, so I don’t think we’ve even thought about it.”

The Wolves have acquired three more players — all defensemen and two with experience in the FPHL — in a league dispersal draft after the Delaware Thunder opted in October not to play this season because of the coronavirus.

In the draft, Watertown selected tough guy Alex Basey in the first round, then took European blue liner Jacob Boll before drafting former Wolves player Bryce Litke in the third round.

All three have been signed by the team, Johansson said.

“We got the guys we wanted in the draft, which was nice,” Johansson said. “We signed a couple other guys, as well. ... Because the Southern League basically lost half its teams, so a lot of players became available, we’ve signed a number of guys. Now it’s really just about the timing, finding the right time to bring the guys in together for the main camp and then trim the roster down to 22 or 23 guys to start the season.”

Basey played three games with the Wolves in his rookie season of 2017-18, before moving on to Danville later that season and played the next season with the Dashers, before skating in 21 games with the then-expansion Thunder last season.

Litke, who checks in at 6-2 and 185 pounds, appeared in nine games with Watertown last season as a rookie before moving onto Delaware. He tallied 10 points, including two goals, in 36 games between the two teams.

Boll, a 24-year-old native of Denmark who is listed at 6-5 and 238 pounds, will be looking to make his North American debut. He’s already played two games in his homeland this year after playing in France last season and in Sweden in 2018-19.

“We signed Boll and (he) has some real pedigree,” Johansson said. “We think he’s going to be with us, on Nov. 20 he’s coming over to start getting ready for the season.”

Also, Watertown acquired yet another goalie, this time in a trade with Port Huron by dealing former SUNY Canton forward Joe Deveny, who played 40 games with the Wolves last season, for Anthony Pupplo.

Pupplo, a New York native, played the past four seasons at the NCAA Division III level, two with Neumann University in Pennsylvania and the last two at New England College in New Hampshire.

Deveny totaled 47 points, including 21 goals, as a rookie last season with the Wolves and played two games with Birmingham of the SPHL, tallying a goal after he was called up by the team.

With recent signings, the Wolves’ training camp roster now stands at close to 40 players. Watertown team general manager and coach Brent Clarke has skated with some players who are already in town.

“I think we’re in a great place as far as the hockey,” Johansson said. “Clarkie has signed great players, they’re very enthusiastic to be here, it’s just a matter of getting through all this and then getting some clarity on everything.”

He added: “And we’re continuously looking for ways to add to the roster, just because with other leagues suspending play, there’s so many players that are becoming available.”