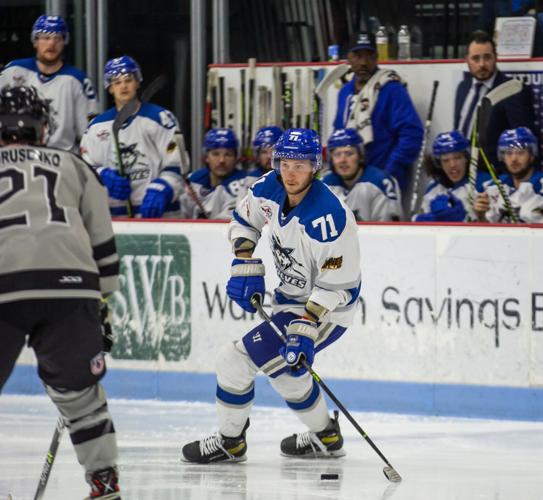 The Watertown Wolves’ Alexander Jmaeff looks for an open pass in the second period of Friday night’s game against the Delaware Thunder at the Watertown Municipal Arena. Kara Dry/Watertown Daily Times 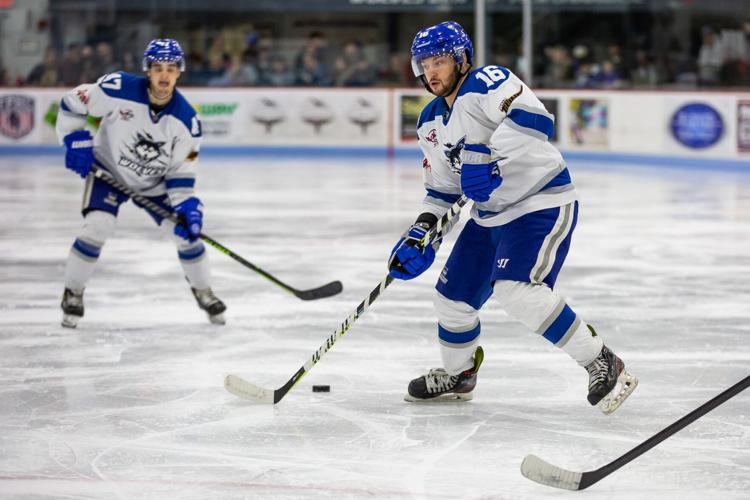 The Watertown Wolves’ Tyler Dellina fields a pass in the second period of Friday night’s game against the Delaware Thunder at the Watertown Municipal Arena. Kara Dry/Watertown Daily Times 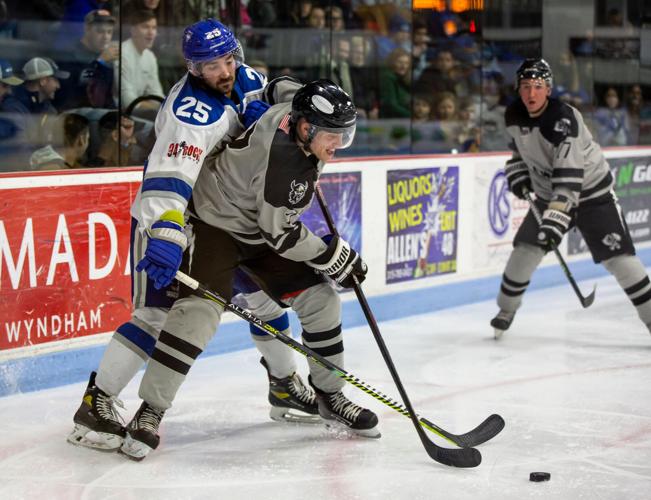 The Watertown Wolves’ Colin Chmelka battles for possession in the second period of Friday night’s game against the Delaware Thunder at the Watertown Municipal Arena. Kara Dry/Watertown Daily Times 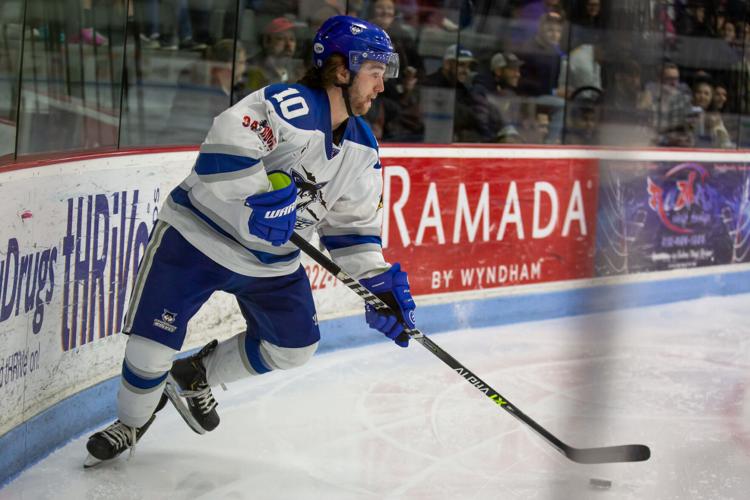 The Watertown Wolves’ Brendan Hussey looks for an open pass in the second period of Friday night’s game against the Delaware Thunder at the Watertown Municipal Arena. Kara Dry/Watertown Daily Times

The Watertown Wolves’ Alexander Jmaeff looks for an open pass in the second period of Friday night’s game against the Delaware Thunder at the Watertown Municipal Arena. Kara Dry/Watertown Daily Times

The Watertown Wolves’ Tyler Dellina fields a pass in the second period of Friday night’s game against the Delaware Thunder at the Watertown Municipal Arena. Kara Dry/Watertown Daily Times

The Watertown Wolves’ Colin Chmelka battles for possession in the second period of Friday night’s game against the Delaware Thunder at the Watertown Municipal Arena. Kara Dry/Watertown Daily Times

The Watertown Wolves’ Brendan Hussey looks for an open pass in the second period of Friday night’s game against the Delaware Thunder at the Watertown Municipal Arena. Kara Dry/Watertown Daily Times

WATERTOWN — The Watertown Wolves entered April much the same way the balance of their season has gone, with another resounding victory and yet another career milestone for team captain Justin MacDonald.

Alexander Jmaeff had a hand in four scores on the night with two goals and two assists and MacDonald scored his 60th goal of the season as the Wolves rolled to an 8-1 rout of the Delaware Thunder on Friday in a Federal Prospects Hockey League game before 939 fans at Watertown Municipal Arena.

League-leading Watertown (40-11-2) also officially clinched the No. 1 seed in the league playoffs, which begin later this month.

“It’s been a long season, mostly ups, but we had some downs as well,” said MacDonald, who scored his goal while on the power play in the third period. “We clinched the playoffs a while ago, but we wanted that first place to be a little relaxed and get a couple extra days off to work on some things we need to work on.”

MacDonald is the first player in franchise history to reach 60 goals, which he’s done in 49 games. He also holds the team record for goals in a season, as he has surpassed Tyler Gjurich’s mark of 56 set in the 2017-18 season.

“I’ve never hit 60 before, so I’m very happy with that and I’ve never be able to do it without my linemates and Brent (Clarke) helping each and every one of us along the way,” MacDonald said. “We all have individual and team goals and that’s an individual goal I’m glad I made, and now it’s (to) win the championship.”

“Yeah, 60 goals is huge,” Clarke said. “It doesn’t matter what level you’re at, 60 (goals) in pro hockey is a big accomplishment, you’ve got to be happy for a guy like that.”

Colin Chmelka contributed two goals and an assist and Lane King scored a goal and assisted on two others for the Wolves.

“I love where we’re at,” Clarke said. “We’re going to rest some guys down the line now that we’ve clinched finally. We just going to get through unscathed hopefully and everybody healthy and move on and be ready for the playoffs.”

Last-place Delaware (6-39-2) has already been eliminated from the playoff chase and is the only team that won’t play in the expanded postseason, which includes an extra round.

“We really came out hard and we really wanted this win to step back and breath a little bit,” MacDonald said. “And now we can focus on some things we need to work on.”

After a scoreless first period, the Wolves struck for three consecutive goals in the second period, including their first two tallies in the first two minutes and 43 seconds of the frame.

First, King scored 38 seconds in, with Andrew Harrison assisting, with the goal coming seven seconds after the Wolves’ first power play of the night expired.

Jmaeff, who also assisted on King’s goal, then scored for the two-goal lead, with King setting up the tally. Jmaeff followed with his second tally of the night, coming with 6:44 left in the period, with Josh LaBelle and King assisting.

“We had a lot chances, we just weren’t able to bury them,” MacDonald said of the first period. “We did a couple faceoff plays that we worked on in practice and that’s how Jammer scored two of his goals and it worked right there and it was back to back.”

“It felt good, we executed our game plan,” said Jmaeff, who has scored 44 goals in 46 games. “Delaware, they’re not the best competition, but we just wanted to have a good game and play to the best of our ability and I think we showed that tonight.”

Delaware broke through on former Wolves’ player Ryan Marker’s unassisted goal with 3:14 left in the period as he converted on a turnover.

Andrew Harrison scored a goal 3:09 into the final period, with Chmelka assisting, and MacDonald followed with his power-play goal six minutes in, which was set up by Jmaeff.

“It’s an honor, he’s just such a good hockey player and it’s just a pleasure playing with him every day, he’s making everyone around him a better hockey player,” Jmaeff said of MacDonald.

Chmelka then tallied back-to-back goals, including a shorthanded tally, and Ryan Devine scored to complete the scoring.

The Wolves have now won all five games against the Thunder, including all four in Watertown.

“I think we’re really good at this point,” MacDonald said. “There’s a couple things we need to clean up a little bit, like turning the puck over at the blue line and we need to start making safe plays. Anything can happen in the playoffs and we don’t want to be making the wrong play at the wrong time, that’s what’s going to win and mostly lose games.”

Watertown hosts Delaware again at 7:30 tonight at the Fairgrounds, before playing at Danbury at 7 p.m. Wednesday.

■ NOTES: The Wolves will host their Pink in the Rink night to promote cancer awareness tonight and will wear special pink jerseys, which will be auctioned off afterward. ... This week, Wolves rookie goalie Breandan Colgan was placed on leave. Also, Watertown forward Kyle Heitzner was placed on season-ending injury reserve.