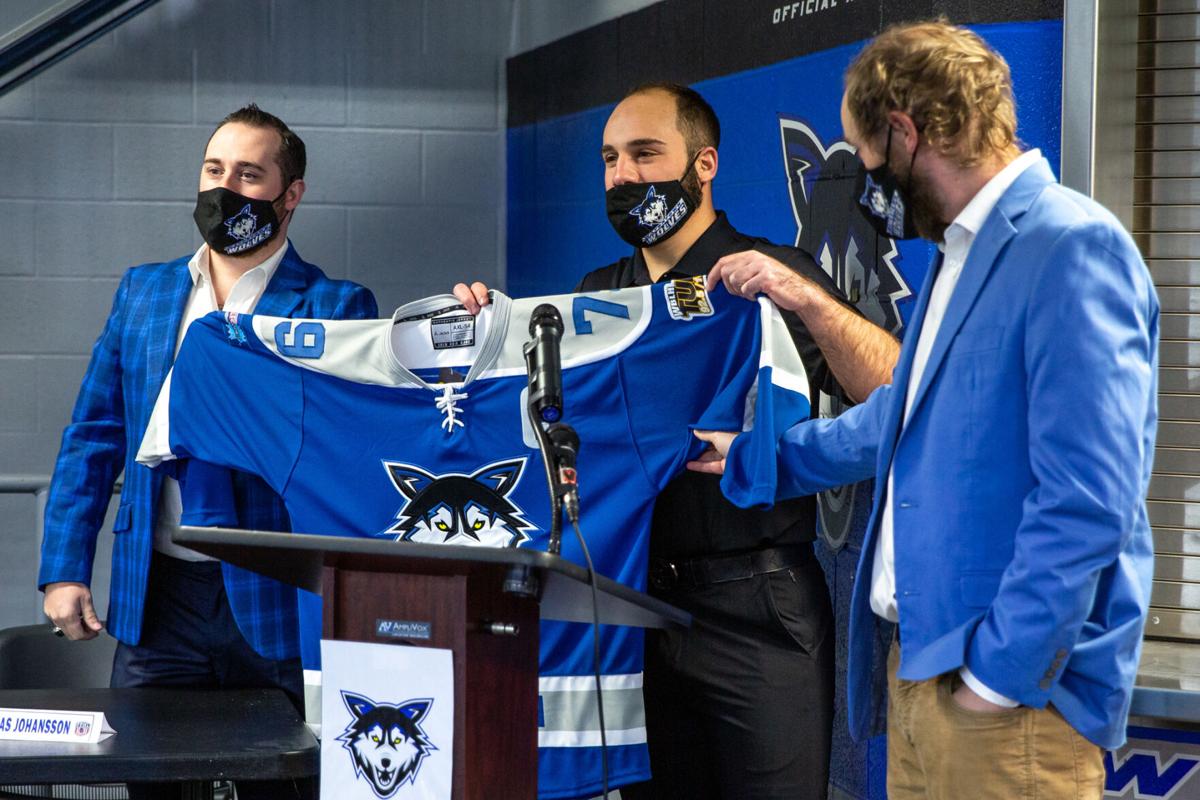 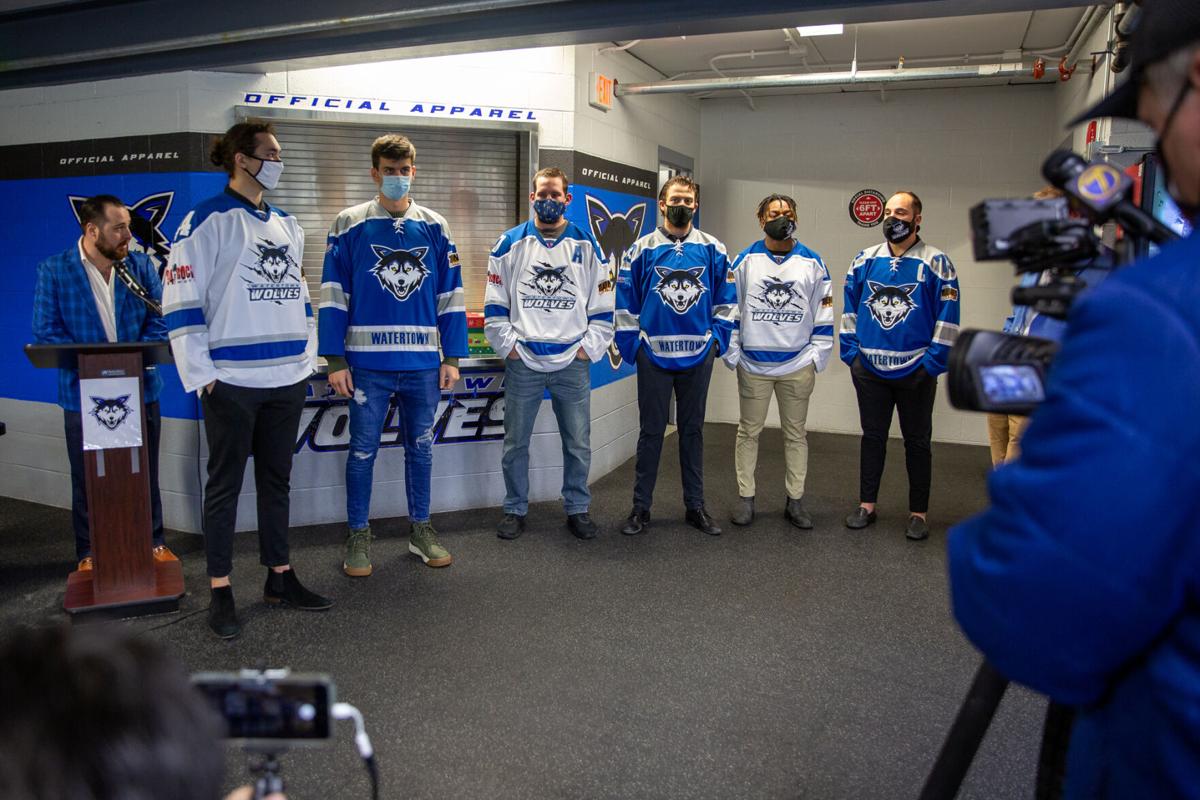 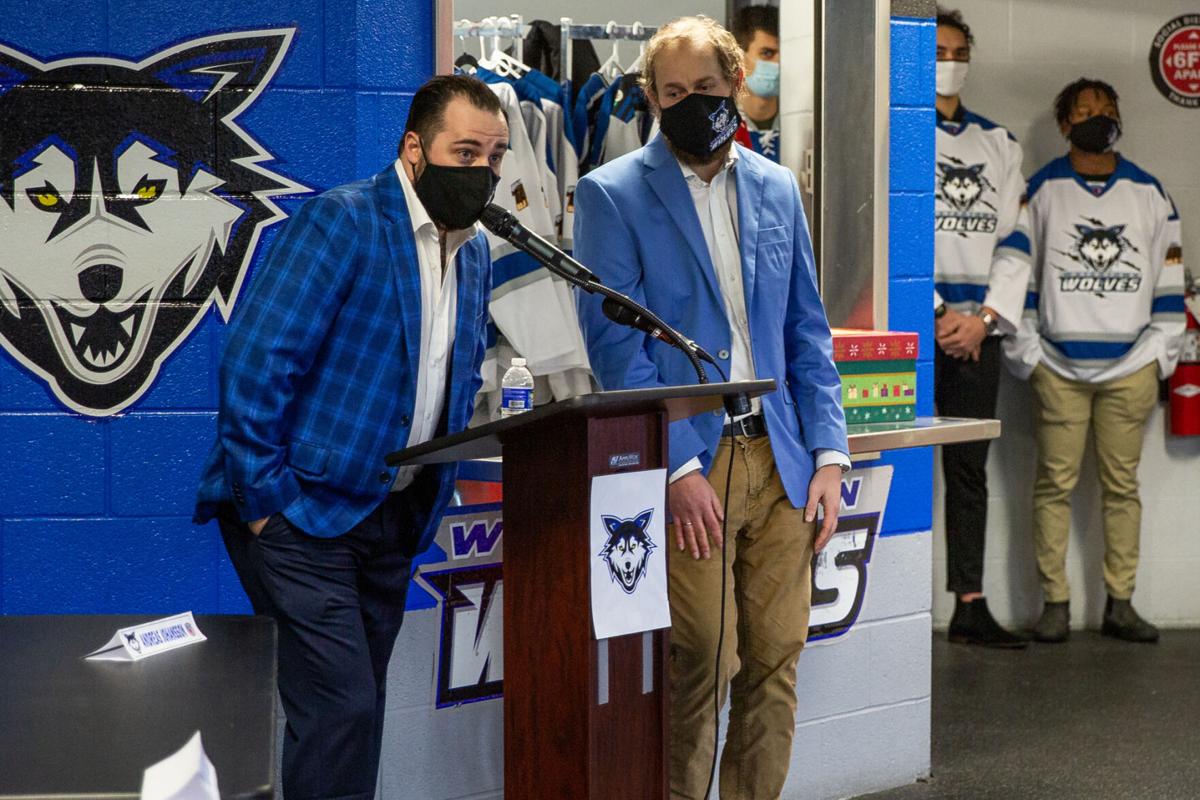 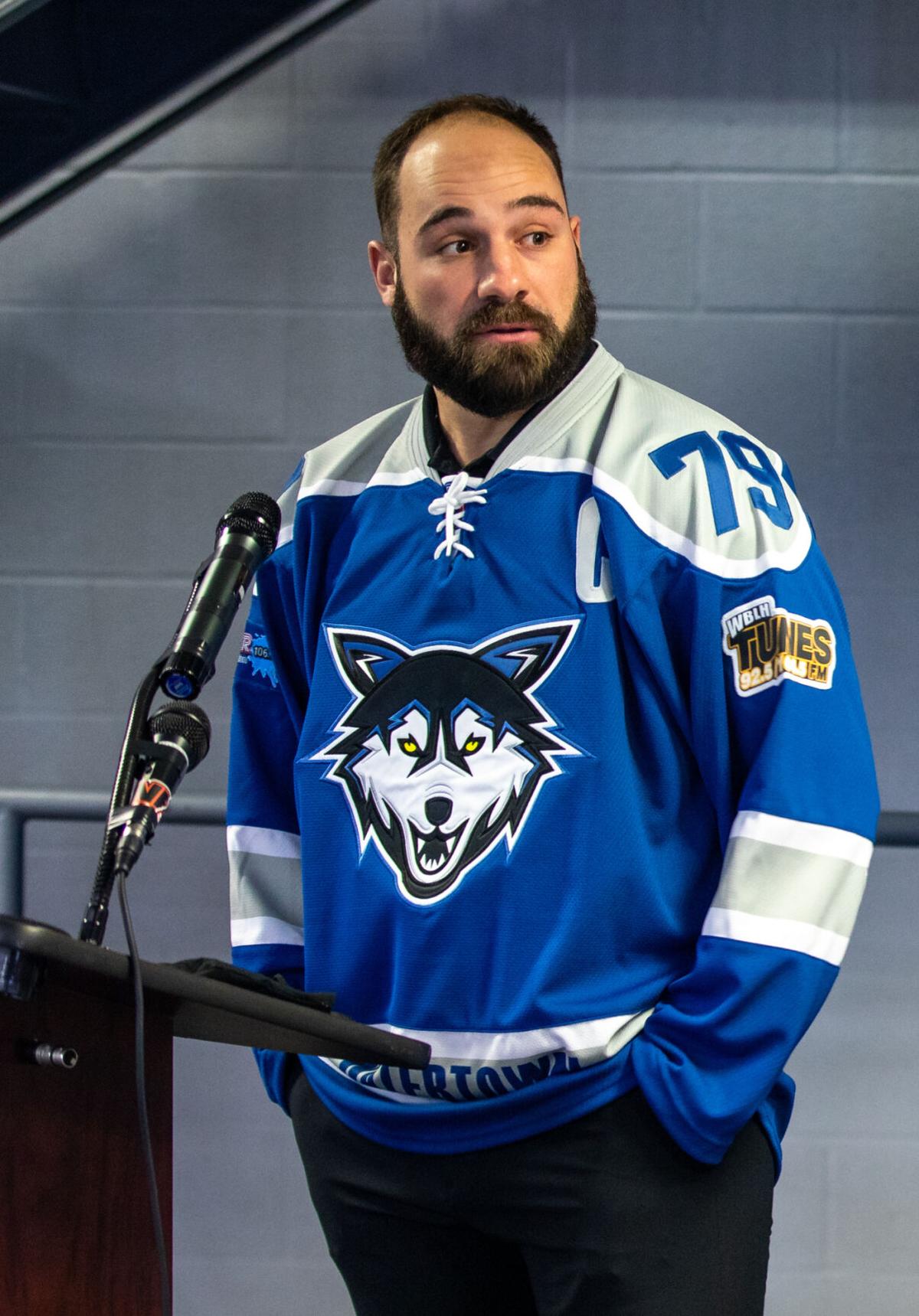 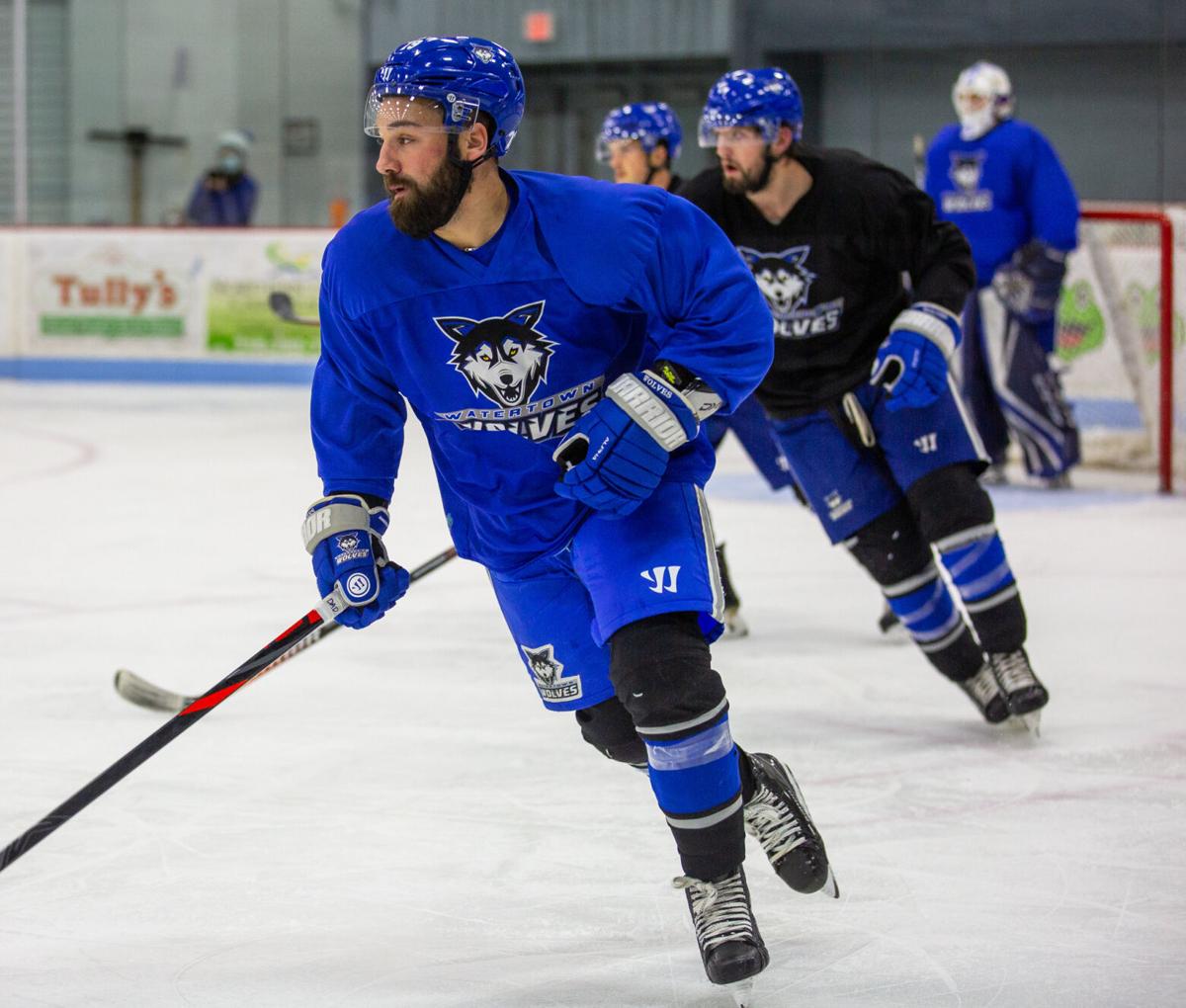 WATERTOWN — The Watertown Wolves announced they are ushering in a “new era” for the franchise in the Federal Prospects Hockey League in a Friday afternoon press conference.

“It’s an exciting day, we feel this is the start of a new era for the Watertown Wolves,” Wolves majority owner Andreas Johansson said.

The team’s new sweaters retained the franchise’s color scheme of blue and gray, with the road jerseys featuring a darker shade of blue and a larger, more prominent Wolves logo.

“Really exciting, really excited to see the jerseys,” Hein said. “We saw the other equipment and now to see it all put together is great, it’s motivating. We have a new honor, new coach and it’s great for the organization, great for the league, it’s special.”

“We’re excited, we’re hoping to get some good news out there,” Johansson said. “And I think we’re going to have a fresh new look, starting with our uniforms.”

Johansson also vowed that the team plans to definitely play in the new year, even without fans despite the ongoing COVID-19 pandemic that has put all pro hockey levels on hold.

“It’s not an ideal situation,” Johansson said. “But at this point, I’m so committed that we’ll play regardless, even if it means an empty building.”

Johansson said the team is proposing a plan to team owners where the league would get underway in the first week of February and continue through late April.

The FPHL’s season, which usually gets underway in early November, has been already been postponed several times, with the latest coming in November, when the league announced a tentative start date for Jan. 15 because of the pandemic.

If all goes well for the Wolves, they will gather as a team in late January to prepare for the season.

Watertown already held its training camp for five days from Nov. 30 to Dec. 4, and was the first team in the league to do so this year.

“We got through our entire training camp without a single case of COVID,” Johansson said. “Everybody isolated, everybody got tested, everybody did exactly what we asked them to do to stay safe, which shows it really can be done.”

With current COVID-19 protocols in New York state, the Wolves wouldn’t be able to host games with fans, a scenario the team is willing to do if and when a season begins.

“I know the league is doing what it can to help owners with costs, but we’re going to do all we can to be ready when the season happens,” Johansson said. “But either way, I think we’ll be playing.”

A season is also contingent upon there being other teams for the Wolves to play against as there are currently seven teams in the league, including Watertown’s rival Elmira.

While a league schedule has yet to be announced, Johansson said the Wolves will likely play more games against Elmira and Danbury in Connecticut, with perhaps single road trips to play Carolina and Columbus (Ga.) in the South, as well as Port Huron in Michigan and Danville in Illinois.

“We’re trying to figure out which way to go with the schedule,” Johansson said. “Like we want to start in February and hopefully cut down on travel between the teams, and just make it work.”

Hein, a six-year pro hockey veteran, was acquired by Watertown in a trade with Danville in May, sending long-time Wolves’ defenseman Kyle Powell to the Dashers.

The high-scoring Hein, who scored 29 goals in 45 games with Danville last season, as well as totaling 56 penalty minutes, served as assistant captain for the Dashers last season.

“It’s really cool,” Hein said of being named captain. “Honestly, I had no idea, they pulled me aside after practice and showed me the jersey. And it had the letter ‘C’ on it, which is special.”

Hein will wear uniform No. 79 for the Wolves, in honor of his late grandfather Joe Barbagallo, who played one season with the NFL’s Los Angeles Rams as a defensive tackle.

Like most of the Wolves, Hein, who has been with the team since two weeks before training camp, will return home for the holidays before returning to town in January.

“Obviously it’s been really special to see, because I’ve been around the league and this is my third year in the league,” said Hein, a Massachusetts native. “Usually teams get better toward the end of the season, and I’ve never seen a team this good this early, so it’s really exciting to see.”

“This team is about size, size and size,” Wolves head coach Brent Clarke said. “We have a good mix with talent, but we also have some tough hockey players.”

Clarke, who helped design the Wolves’ original jerseys as he was the franchise’s first head coach in the 2014-15 season, also helped in the design of the new jerseys.

“The jerseys, which are blue and white, have different logos and we’re bringing back the yellow eyes of the wolf and the fangs, which we had on the original jerseys,” Clarke added about the team’s new blue road jerseys. “We just want to make everything fresh for this upcoming season.”