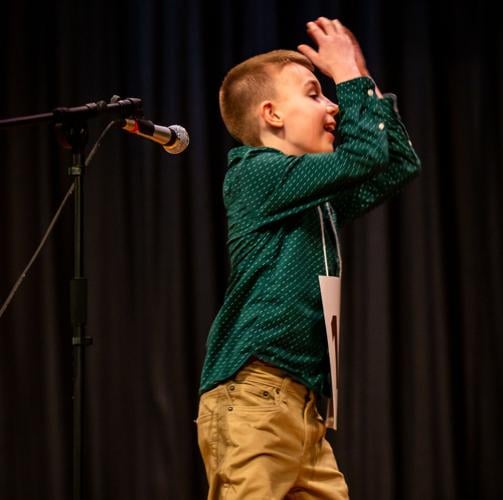 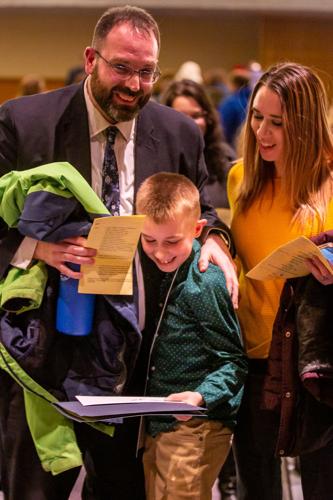 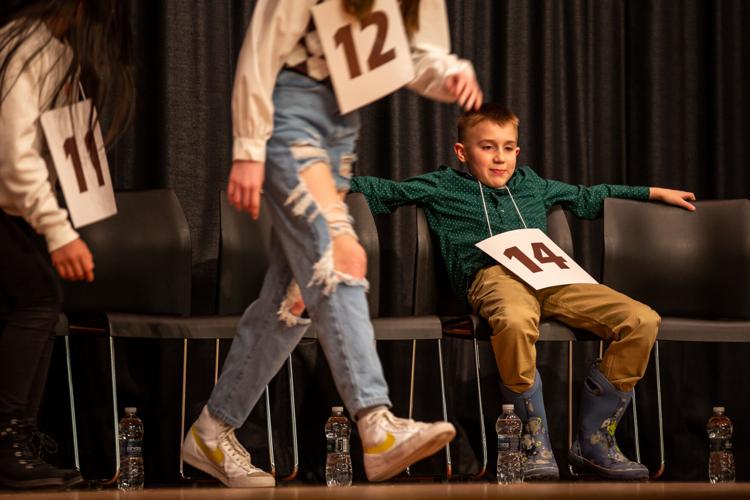 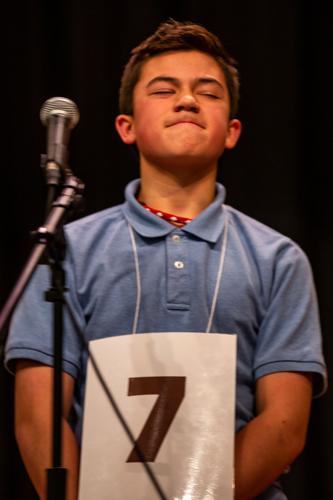 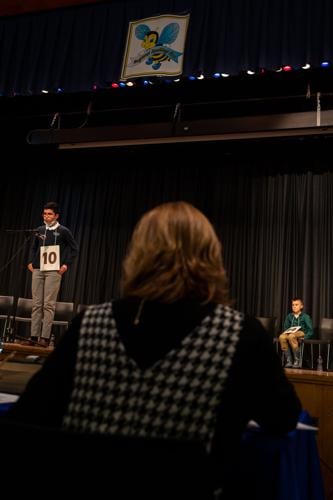 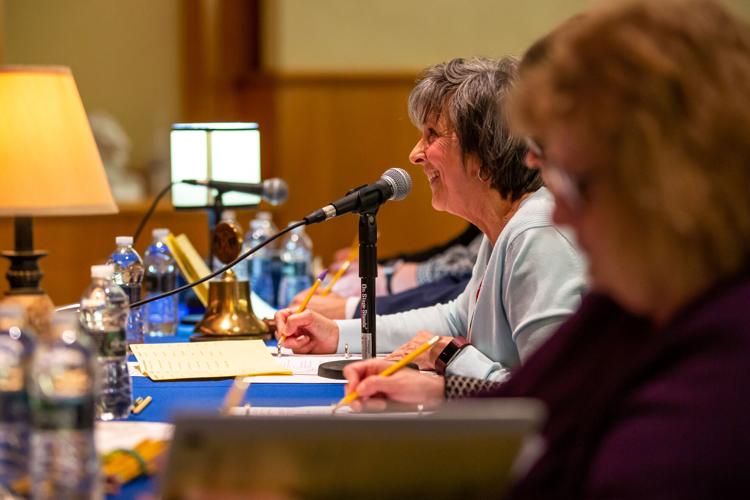 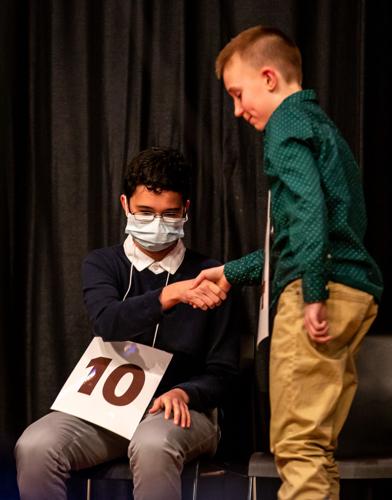 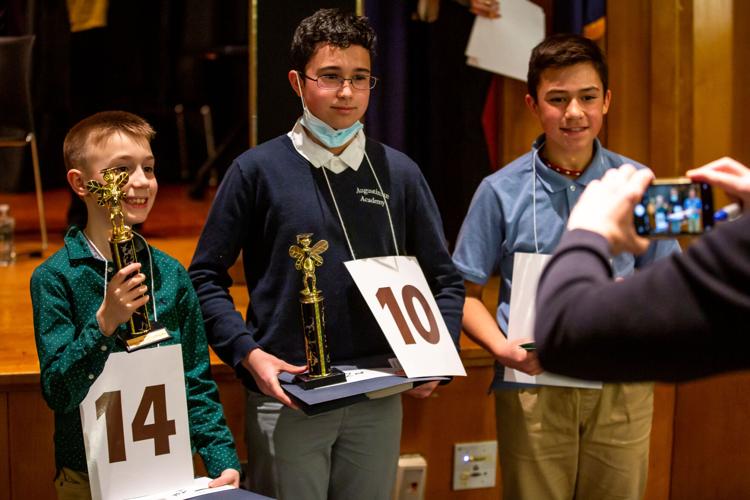 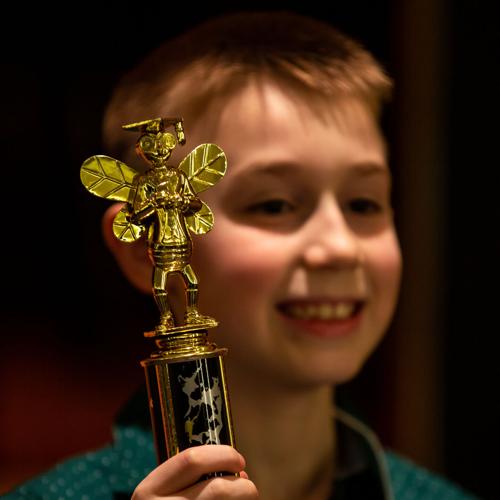 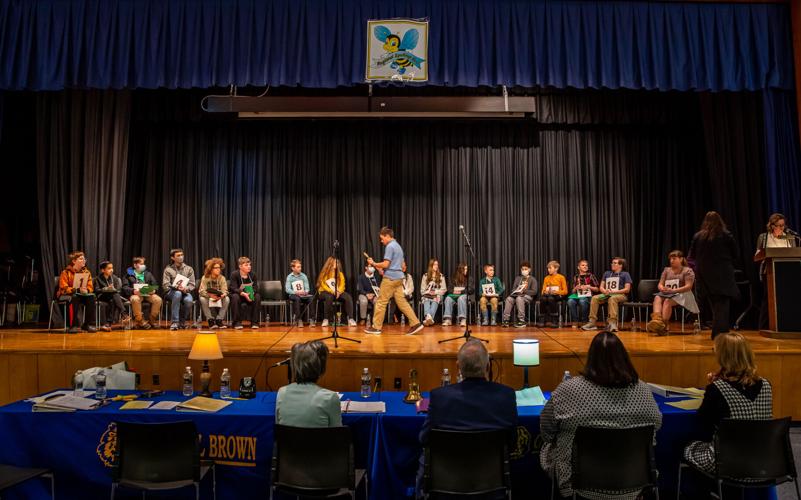 Lowville Academy’s Brayden Gillette receives his third-place trophy as all of the spellers are recognized at the end of the Scripps Regional Spelling Bee on Thursday night at General Brown High School in Dexter. Kara Dry/Watertown Daily Times

Lowville Academy’s Brayden Gillette receives his third-place trophy as all of the spellers are recognized at the end of the Scripps Regional Spelling Bee on Thursday night at General Brown High School in Dexter. Kara Dry/Watertown Daily Times

DEXTER — After some back-and-forth spelling against his final competitor, Micah R. Sterling, 9, took to the microphone at the 33rd Scripps Regional Spelling Bee for students in Jefferson, Lewis and St. Lawrence counties and was given “ingot” as his final word.

Upon spelling it correctly, the General Brown fourth grader reacted with a mix of shock and joy when he realized that he had won, ensuring a ticket to the Scripps National Spelling Bee later this year. He said he was surprised and proud that he won the first spelling bee he’s ever entered, cheered on by his parents, and is excited for the chance to compete at the national level.

The bee had 19 students in grades four through eight competing for the title. The competition featured modern words like “selfie,” and others such as “hydra,” “scrapple,” “kaboodle,” “yardang” and “pendragon.”

Merriam-Webster defines the winning word, “ingot,” as “a mass of metal cast into a convenient shape for storage or transportation to be later processed.”

Micah qualified for the regional bee as the runner-up from Brownville-Glen Park Elementary School’s bee in January.

With such talented regional spellers, few were knocked out of the first rounds of competition — until one by one they were eliminated, leaving just Micah and second-place finisher Isaiah R. Welch, 13, Augustinian Academy, to go head to head.

In second and third place, respectively, Isaiah and Brayden Gillette, 13, Lowville, received a weekly classroom set of Watertown Daily Times newspapers for the rest of the school year.

Teachers of the top three spellers must contact the Times newspaper in education coordinator at nie@wdt.net to begin service. Trophies for the top six finalists were given by the Spelling Bee Committee, and all contestants received a certificate of participation and a book.

As the first place winner, Micah will advance to compete in Washington, D.C., with travel expenses covered by the winning school district and the Watertown Daily Times. The annual Scripps National Spelling Bee will be held at the Gaylord National Resort and Convention Center in National Harbor, Md., returning after a hiatus in 2020 and being held in Orlando last year.

The docket originally featured 20 contestants from 14 districts across the region, though one did not end up competing with the others, leaving a total of 19 students.

The remaining finalists, in no particular order:

The event was also live streamed and can be viewed at wdt.me/SpellingBee.

Should state funds go to pay tuition for religious schools?

The Supreme Court on Tuesday extended its support for religious schools, ruling that parents who send their children to such institutions have a right to tuition aid if the state provides it to other similar private schools.