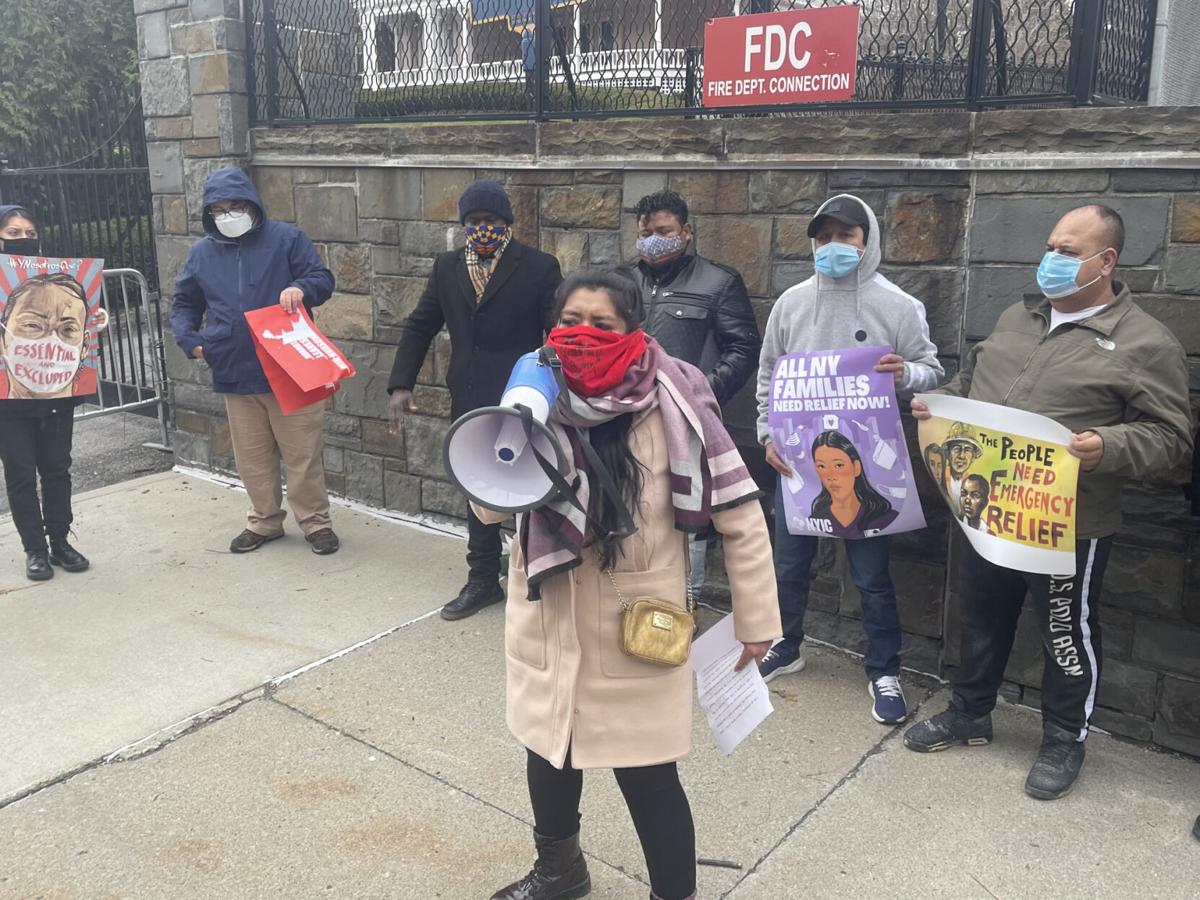 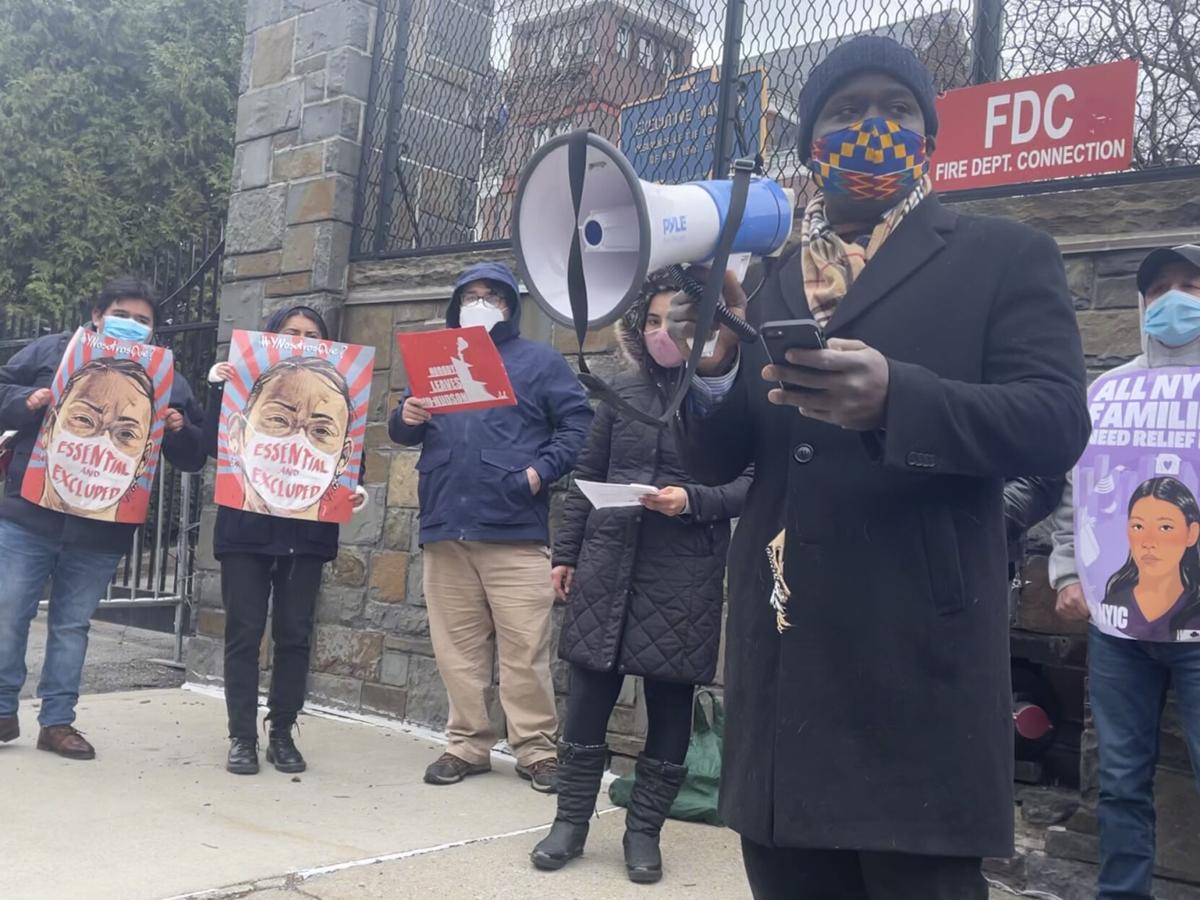 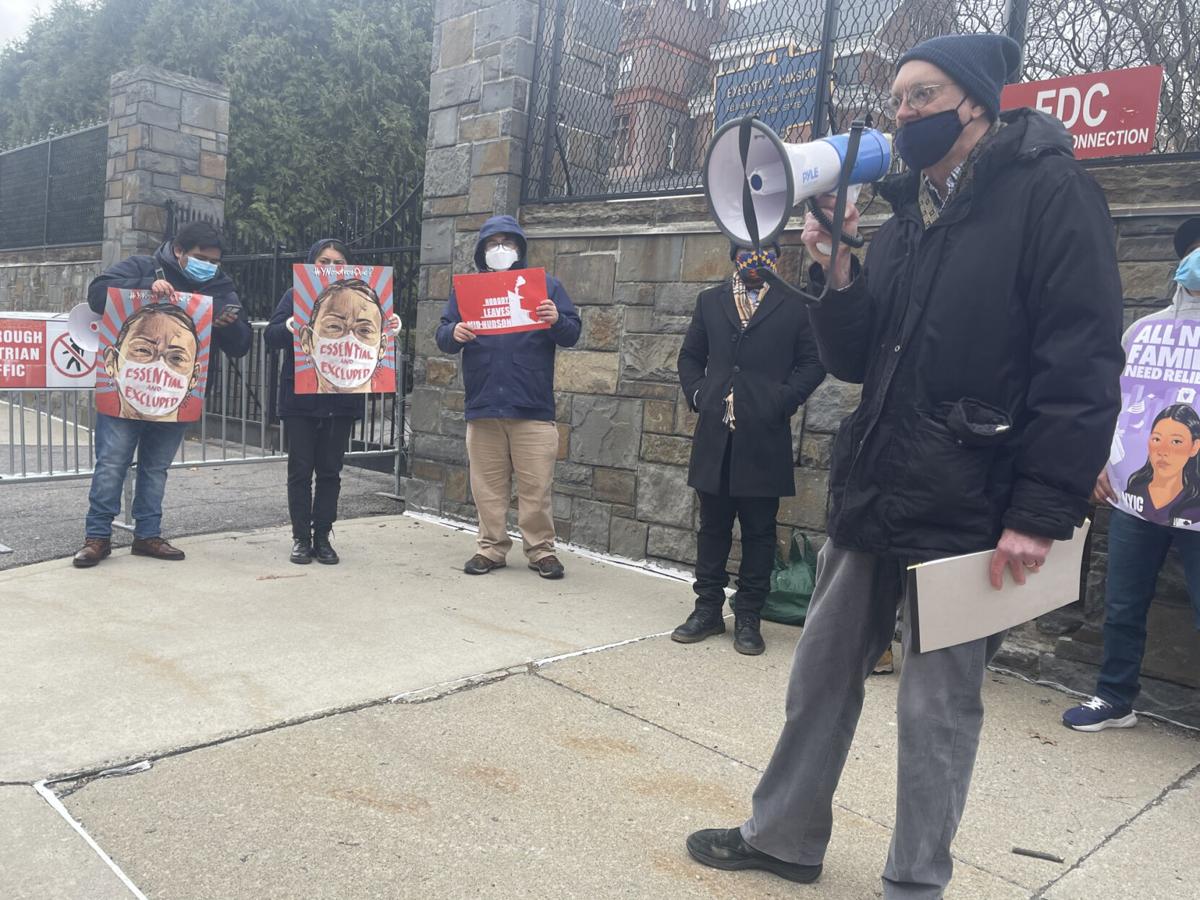 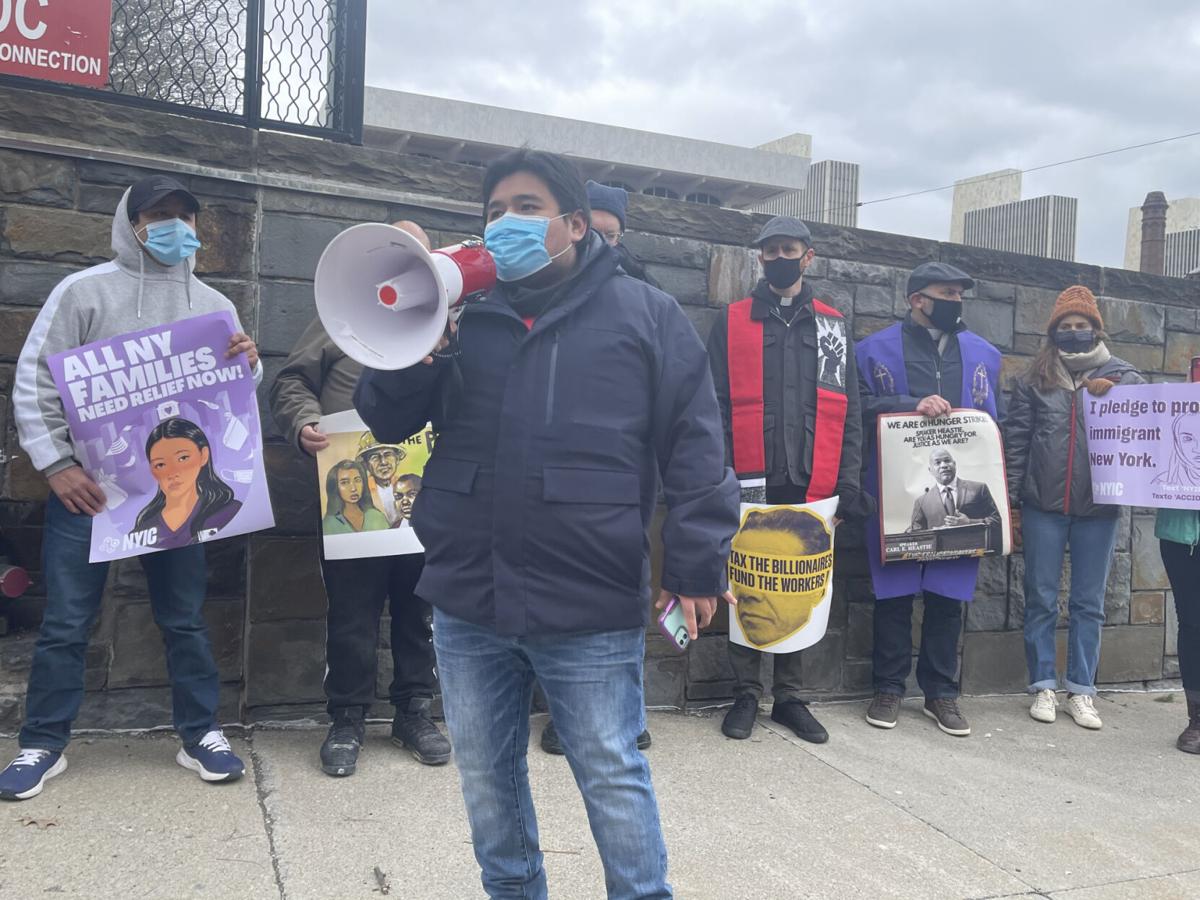 Top Democratic legislative leaders persisted with discussions to finalize the late state spending plan, which deadlined at midnight Thursday. The largest sticking point, officials have said, is a fight to increase taxes on the state’s wealthiest residents.

A few dozen interfaith leaders and demonstrators with Columbia County’s Sanctuary Movement gathered with signs and megaphones outside Gov. Andrew Cuomo’s Executive Mansion on Eagle Street in Albany for several hours Friday, shouting “Tax the rich!,” for the governor to “wake up!” and “Fund excluded workers!” in support of the proposed tax hike on millionaires and billionaires and fund benefits for forgotten essential workers.

“One of the common principles that unites all major faith traditions around the world is a tradition that we have to love our neighbors,” said Terrence Diggory, a Presbyterian Church USA elder. “Today, I join interfaith leaders across New York state to urge that we put that lesson into practice by providing much-needed funds to New Yorkers who have been excluded from much-needed relief during this pandemic.”

Hundreds of thousands of New York essential workers, such as undocumented immigrants, cash economy workers and people recently released from state prison, have largely been ineligible to receive unemployment benefits, stimulus checks and other federal and state economic relief programs in the wake of the COVID-19 public health crisis.

The roughly 274,000 excluded essential workers would be owed $3.5 billion in supplemental benefits.

“These people are our neighbors,” Diggory said. “They live next door, they’re down the street, they’re on the farm. But they are also our neighbors because they act like neighbors to us, growing and harvesting our local crops, serving and maintaining our local restaurants, caring for our loved ones.”

Gov. Andrew Cuomo is against the Assembly and Senate’s proposed tax hikes for millionaires and billionaires, including a 1% tax on income from capital gains.

Both chambers seek to increase the top income tax rate from 8.82% to 9.85% for single filers who earn more than $1 million, couples who file jointly earning more than $2 million and adding additional tax brackets for higher earners.

Activists are fighting for lawmakers to legalize six pieces of legislation and the Worker Bailout Fund, which would establish a billionaire tax to create a worker bailout program and give unemployment and other benefits to employees who are typically excluded.

Several cars beeped in encouragement or thrust raised fists out their vehicle windows Friday when driving by the demonstration.

“This is the time for the governor and the Legislature to do the right thing,” Albany Common Councilman Owusu Anane said. “Gov. Cuomo, if you cannot help the vulnerable among us, you should not be giving tax breaks to big corporations who are reaping all the benefits of our excluded workers.

“They want us to step back and we’re not going to step back,” Anane added as he was met with shouts, cheers and applause. “We will not rest until the governor and New York state Legislature treat all New Yorkers with the dignity and respect they deserve.”

Workers outside the Governor’s Mansion requested the program continue through at least December so workers will receive unemployment benefits and aid payments on-par with other essential employees.

Six progressive Democratic lawmakers slept in the Capitol’s War Room on the second floor, a few rooms away from the governor’s office and executive chambers, to demand leaders include the emergency fund for excluded essential workers in the budget.

“We have been eclipsed by the government — we hope the authorities will listen to our voices, taking into account we are on the ones on the front lines,” Nelson, a Columbia County Sanctuary Movement member and excluded essential worker said via a Spanish interpreter.

The Senate and Assembly has proposed $2.1 billion for essential workers to be distributed via a program set to expire in September, but progressives have said the proposal is a starting point, but not enough, and are pushing for the full $3.5 billion so all workers unemployed during the pandemic receive relief.

Rene Mejia Jr., an organizer with Nobody Leaves Mid-Hudson, said how his family and other loved ones, many of whom are immigrant essential workers, have not been afforded access to the same programs as other Americans for financial relief during the pandemic.

Mejia recalled how one family member was forced to return to work immediately after burying a loved one.

“We are not asking for a handout — we are asking for what has been ours this whole time,” Mejia said. “It is a shame when we see our excluded workers pay more in taxes than the 1% in New York state.”

“We have studies that show our excluded workers have contributed 8.9% of their income to taxes — 8.1, and they still get to stay home and exclude us,” Mejia said. “They want us to jump through hoops to even be able to see this aid. I don’t see anyone else jumping through hoops.

Recently, 125 clergy members and religious leaders of varying faiths from around the state signed a letter sent to Cuomo’s office in support of the fund for excluded workers.

Hundreds of people have participated in a large hunger strike centered in New York City and Westchester County to raise awareness for essential workers excluded from benefits. Friday marked the 18th day of the strike.

Diggory drew parallels to this weekend’s religious holidays as Jews observe Passover and Christians prepare to celebrate Easter on Sunday with meaningful feasts.

“Their refusing of food is equally sacred to the sharing of food which is part of the Passover seder or the Christian dinner,” Diggory said. “These witnesses are doing like the ancient prophets and speaking truth to power. They are saying we all deserve to be part of a communion that shares in the abundance of our collective community. It is wrong to exclude workers that are, in many cases, growing the food that is shared in these meals.

Hundreds of workers led a march across the Brooklyn and Manhattan bridges in late March with simultaneous news conferences across the state in support of an excluded workers fund.

Dozens of downstate residents, volunteers and members with the Columbia County Sanctuary Movement and other activists will return to the Governor’s Mansion on Monday to continue their demands to increase taxes on New York’s wealthy. The Sanctuary Movement rallied in the concourse outside the state Capitol on March 24.

Have you or someone in your household benefitted from unemployment pay in the past year?