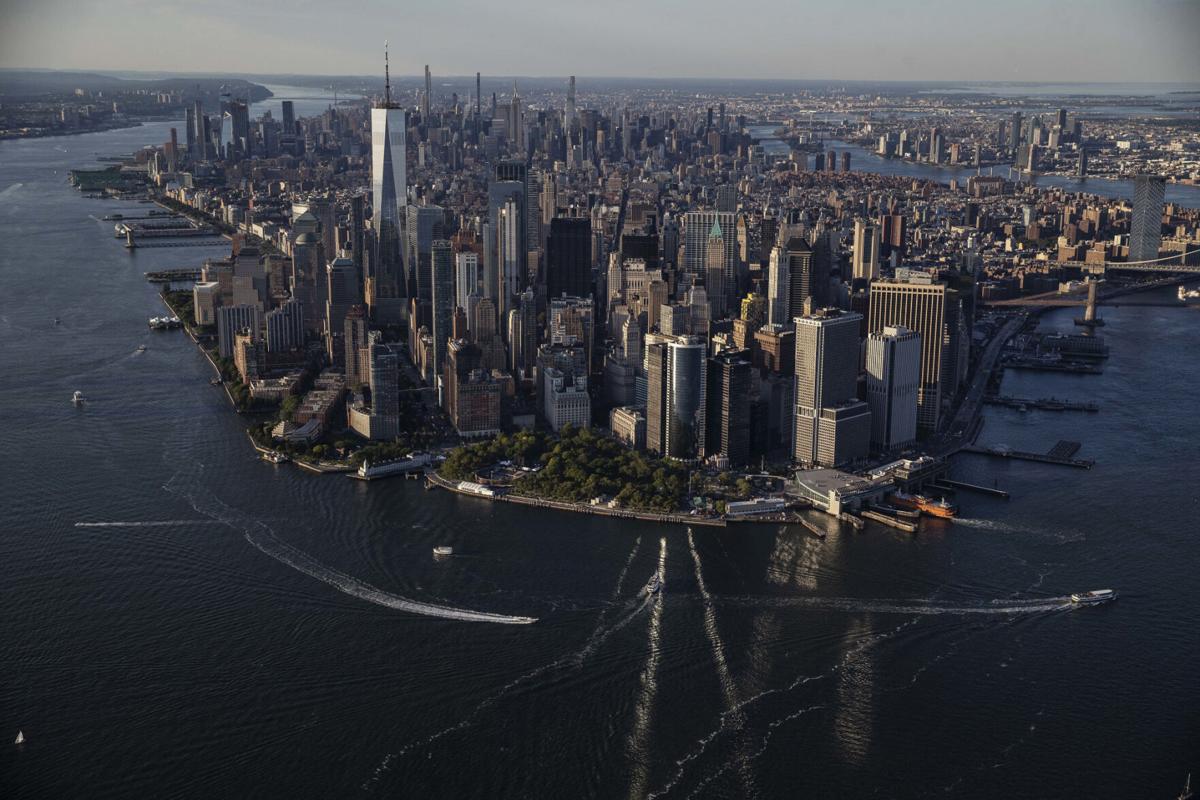 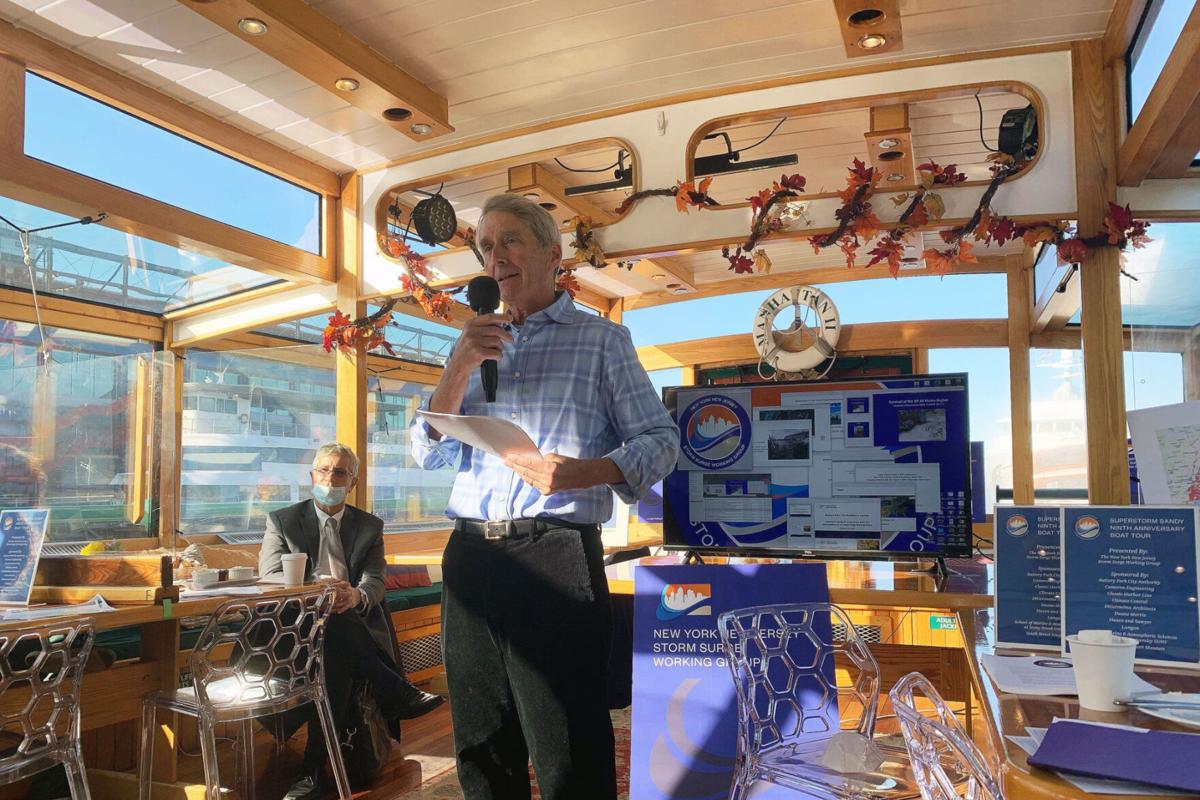 Aboard the Manhattan II, a 100-foot yacht with glass walls and mahogany panelling, a group of scientists, engineers, politicians, and a ship captain spent a recent morning contemplating the deaths of their fellow New Yorkers at the hands of Hurricane Ida’s flood waters.

The day trip marked the ninth anniversary of Superstorm Sandy, and everyone on board had been brought together by a singular mission. They think a series of gates — vast steel doors arranged around the city that can be shut if disaster looms — are the key to protecting the region from disastrous storm damage caused by climate change.

“Don’t underestimate the destruction, dislocation, and human misery that climate change and rising seas will bring in the decades ahead,” said Malcolm Bowman, a professor of oceanography at the State University of New York, Stony Brook. He serves as chair of New York New Jersey Storm Surge Working Group, the organization that hosted the boat ride. The group includes engineers, architects, scientists, and city planners in the region.

Traveling around the bottom tip of Manhattan, past Battery Park City, one seafarer pointed out that a low tide mark he had seen when first moving to New York was now perpetually covered, even when the water was at its lowest ebb. As the wake of the boat crested three feet, others wondered what the Statue of Liberty and Ellis Island, seen in the distance, would look like in 100 years if sea levels rose at the rate expected.

Can an enormous gate really fend off disaster? These kinds of storm surge barriers have proven successful elsewhere. In the Netherlands, the Maeslant Barrier is almost as long as the Eiffel Tower is tall. Comprised of two steel barriers that swing like arms, the barrier cost $635 million euros to build in 1997 currency, the year it was completed. The Thames Barrier in the U.K. is as tall as a five-story building.

There’s also a hurricane barrier in the port of New Bedford, Massachusetts, which was built by the Army Corps of Engineers. “The barrier’s 150-foot opening closes during hurricane conditions and coastal storms make the harbor one of the safest hubs on the eastern seaboard,” boasts the Port of New Bedford website.

The sea wall enthusiasts on the Manhattan II are hoping for similar barriers to be built in four areas surrounding New York City. The working group has proposed three gates at the East River, Jones Inlet and East Rockway, plus an Outer New York Harbor gateway. A sea barrier’s moving gates stay open most of the time. When forecasters warn of inclement weather that might cause a storm surge, the gates swing closed. The idea is that when the surge begins, it will only be severe on the far side of the gate, protecting what is within the walls.

“Regional sea gates constructed as part of a layered defense system will provide the best protection from coastal storm surge and rain-induced inland flooding,” said Sandeep Mehrotra, an environmental scientist at Hazen and Sawyer, a water engineering firm, who was on board the Manhattan II. In addition to building the barrier, the group is advocating for fortified dunes, levees, and restoring wetlands.

A project of this magnitude-the working group estimates a cost between $30 and $40 billion-would require the blessing, planning, and funding of the Army Corps, an engineering branch of the military that oversees mega-projects on the nation’s coastlines. Along with state and local partners, it published an interim report on coastal storm risk management in the New York-New Jersey area in February 2019, which considered the possibility of building surge barriers.

The Corps previously estimated the initial cost of construction for two barriers the Working Group is interested in building at around $40 billion. The predicted duration of construction for one of them was 25 years. In the 2019 Corps report, opponents of the proposal pointed not only to cost and time but also to environmental risk, navigational concerns, and worries that the area inside the wall would flood if the water could not bypass the barrier.

There’s also concern that by the time the project is completed, at least two decades from now, the walls won’t be high enough to accommodate the rapidly rising seas. Even a costly solution may be far from permanent, if rising temperatures aren’t brought under control.

Despite opposition, the Corps is continuing to study the best approach to preserving the city for future generations. The Trump administration halted this research, but study is again underway again under President Joe Biden and is expected to be complete in 2024. The Corps has not fully ruled out sea gates, said James D’Ambrosio, a spokesman for the agency.

“For a challenge of this magnitude, all options need to be on the table,” said Carrie Grassi, deputy director at the New York City Mayor’s Office of Recovery and Resiliency. “We are glad the study was restarted and look forward to the next phase of the Corps’ analysis.”

The Storm Surge Working Group brought flood maps on their yacht trip into the harbor. William Golden, deputy chair of the group, had these maps around him as he stood at the front of the ship, imagining what the future might bring. “If we can save New York City for another 100 years, damn it,” he said, “I think it’s worth it.”