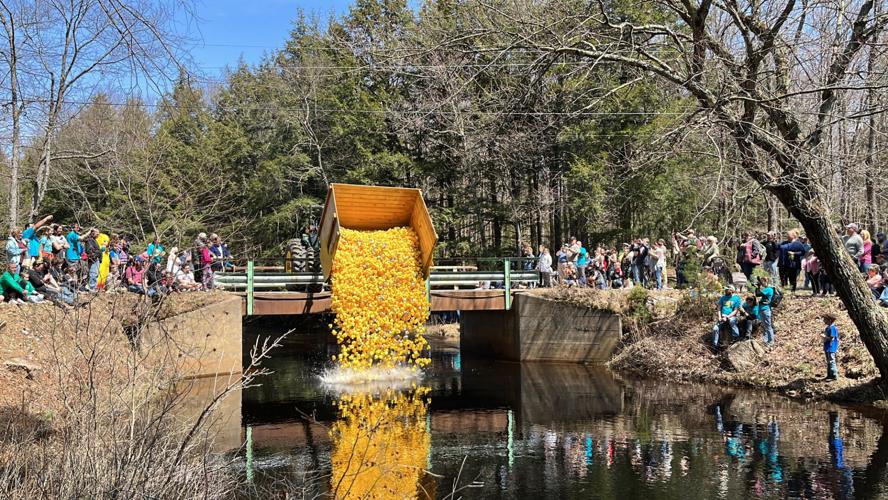 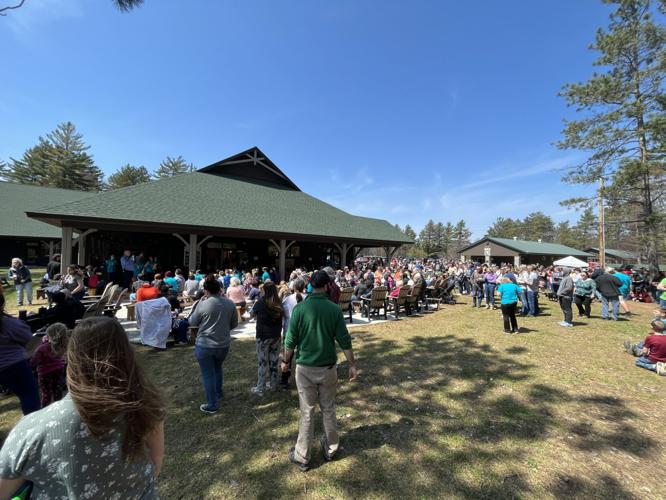 A crowd assembles at the Oswegatchie Educational Center to hear the winner of the 28th annual AdirondDuck race announced. Alex Gault/Watertown Daily Times 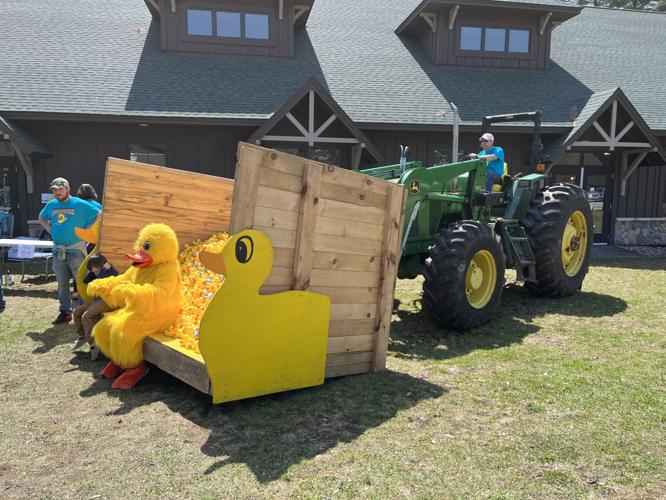 Stephanie Rhoades, an FFA staffer and previous winner of the AdironDuck silver race, sits in a duck costume to take photos with children before the race on Sunday. Alex Gault/Watertown Daily Times 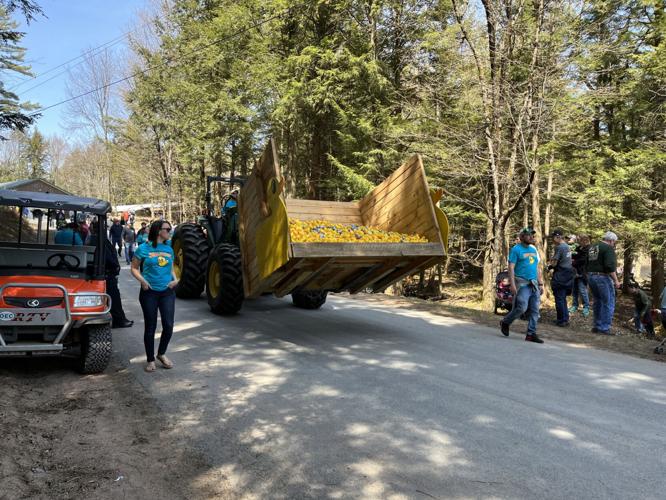 Oswegatchie Educational Center volunteers walk with the box of ducks to the drop site as they prepare for the 28th annual AdironDuck race on Sunday. Alex Gault/Watertown Daily Times

Stephanie Rhoades, an FFA staffer and previous winner of the AdironDuck silver race, sits in a duck costume to take photos with children before the race on Sunday. Alex Gault/Watertown Daily Times

Oswegatchie Educational Center volunteers walk with the box of ducks to the drop site as they prepare for the 28th annual AdironDuck race on Sunday. Alex Gault/Watertown Daily Times

CROGHAN — Throngs of people surrounded a bridge over the Oswegatchie River on Sunday, waiting for a green tractor to dump more than 5,400 rubber ducks into the water.

They were there for the AdironDuck race, an annual fundraiser put on by the Oswegatchie Educational Center that’s been around since 1994.

It was the first time in two years that the center has been able to host a full, in-person AdironDuck race, and Executive Director Todd Lighthall said he’s happy to see the event make a full comeback after two years of quiet, online-focused events.

“We call it the Oswegatchie magic,” he said. “And that magic is people. Having people here, that’s what makes Oswegatchie such an incredible place to be.”

The camp, run by the FFA, has seen the event grow exponentially in its 28 years. Most of the time, it has entailed a huge, camp-wide event held just after volunteers return to open the camp for the summer. Games, food, vendors, raffles and a recently-added 6K run have come to represent the start of the season for the camp and its staff, but two years of COVID-19 restrictions meant only the duck race could go on, streamed live via Facebook.

On Sunday, energy filled the air as kids ran around with their faces painted, took photos with a duck mascot and enjoyed the warm forest air. The race began at 1 p.m., as exactly 5,408 yellow and silver ducks plunged into the river.

They seemed to bounce on the surface for a moment, before carrying rapidly on down the river, around a bend, and into the finish line. Children and their parents ran along the riverbank, guessing which duck was there and hoping they would be the lucky winners of either the $2,000 yellow duck prize, or the $2,500 silver duck race.

But this year, there was only one winner. A silver duck, number 9069, was the first through the finish line, and its owner, Croghan resident Joseph A. Edick, won a combined grand prize of $4,500.

“It’s only the second time that’s happened,” Mr. Lighthall said. “The first time was the first year we introduced the silver duck race.”

Overall, the duck race itself raised $70,000 for the camp and for scholarships to allow children to attend an FFA summer camp program. The camp also took in other donations on the day, from the 6K run, a pancake breakfast and donations that visitors offer just because.

Over 1,200 people attended Sunday’s event, more than usual but not quite the 2,000-person record set pre-pandemic.

“We have so many people today because it is such a nice day,” Mr. Lighthall said.

And the attendees seemed to agree. Lori P. Lehner, whose husband attended the camp as a child, said she was appreciating the first big festival-style event their family has been able to attend since 2019.

“To get out, see people we haven’t seen in ages, support a fantastic camp, we’re very happy,” she said.

Her 6-year-old son Michael said he was most excited to get a yellow rubber duck painted on his face, and to see many people his age around to play with.

“There are a lot of people here,” he said, before running off to join a game.