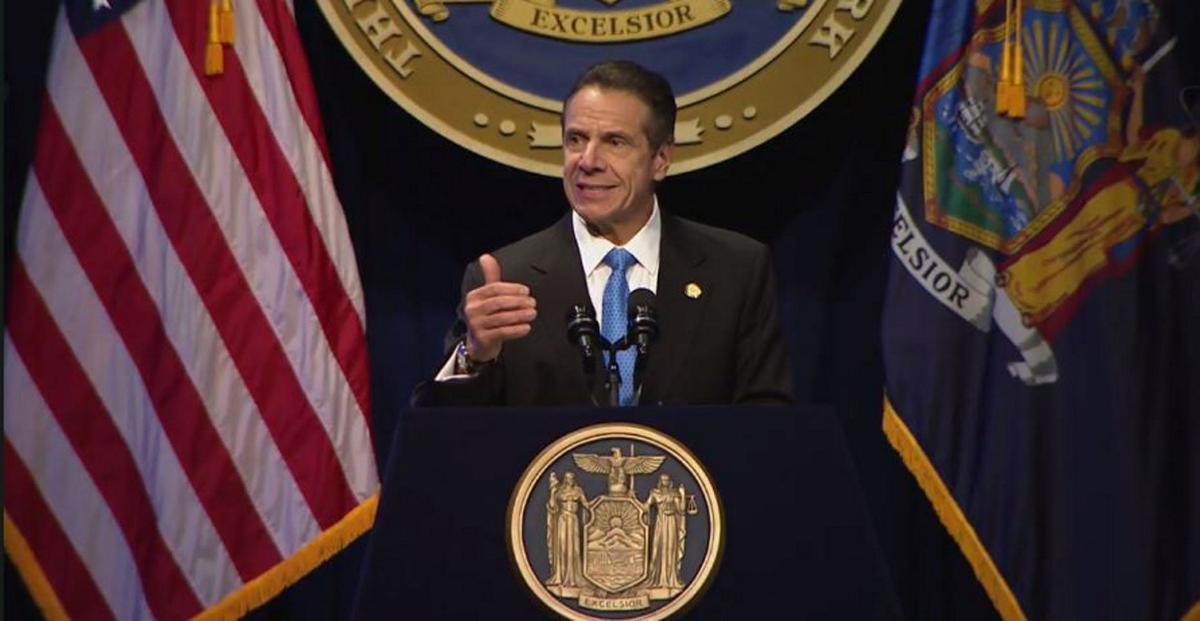 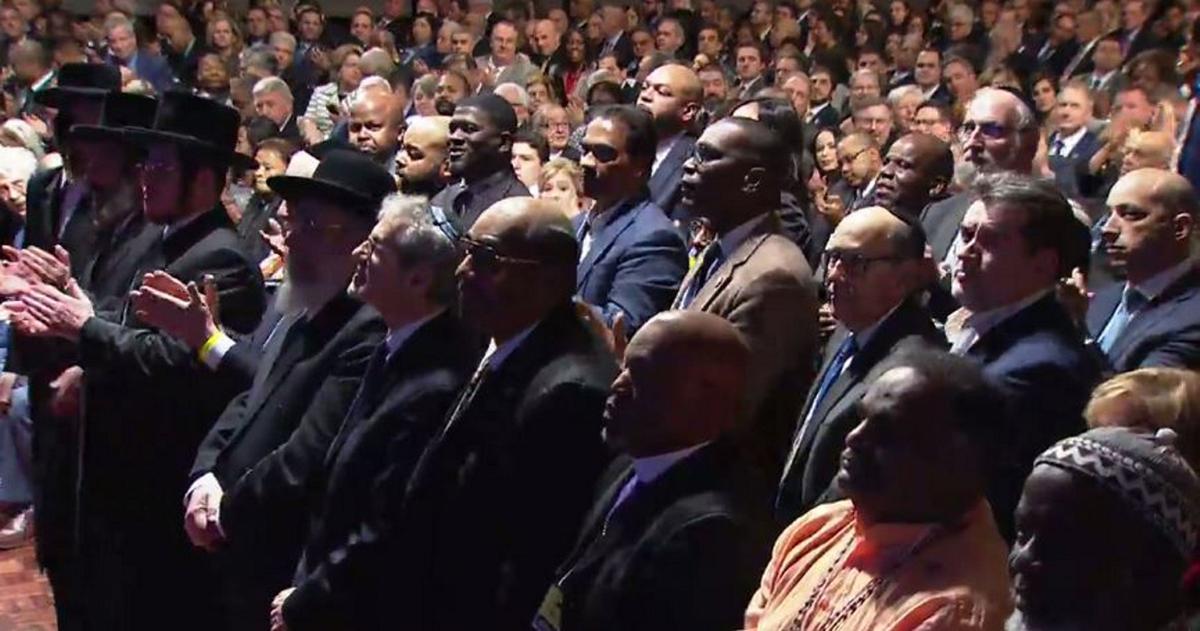 Courtesy of Gov. Andrew Cuomo’s OfficeMembers of New York state’s faith community applauds as the governor speaks out about fighting hate crime during the annual State of the State address in Albany. Melanie Lekocevic 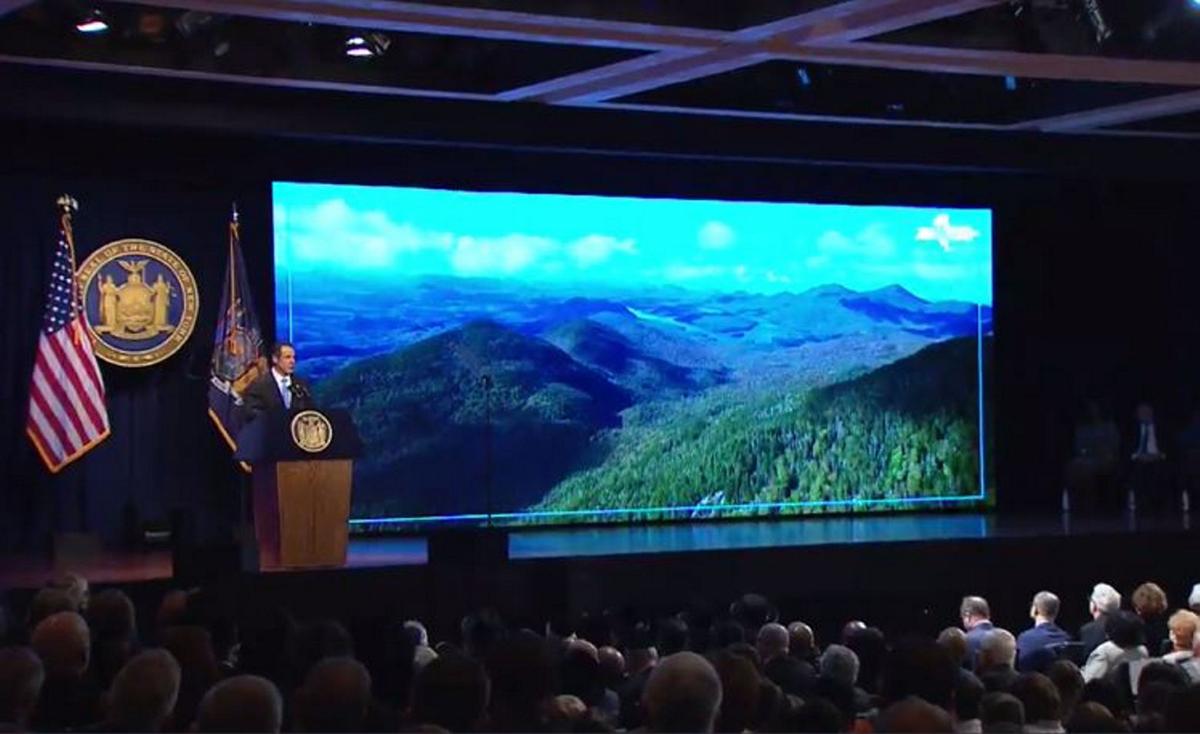 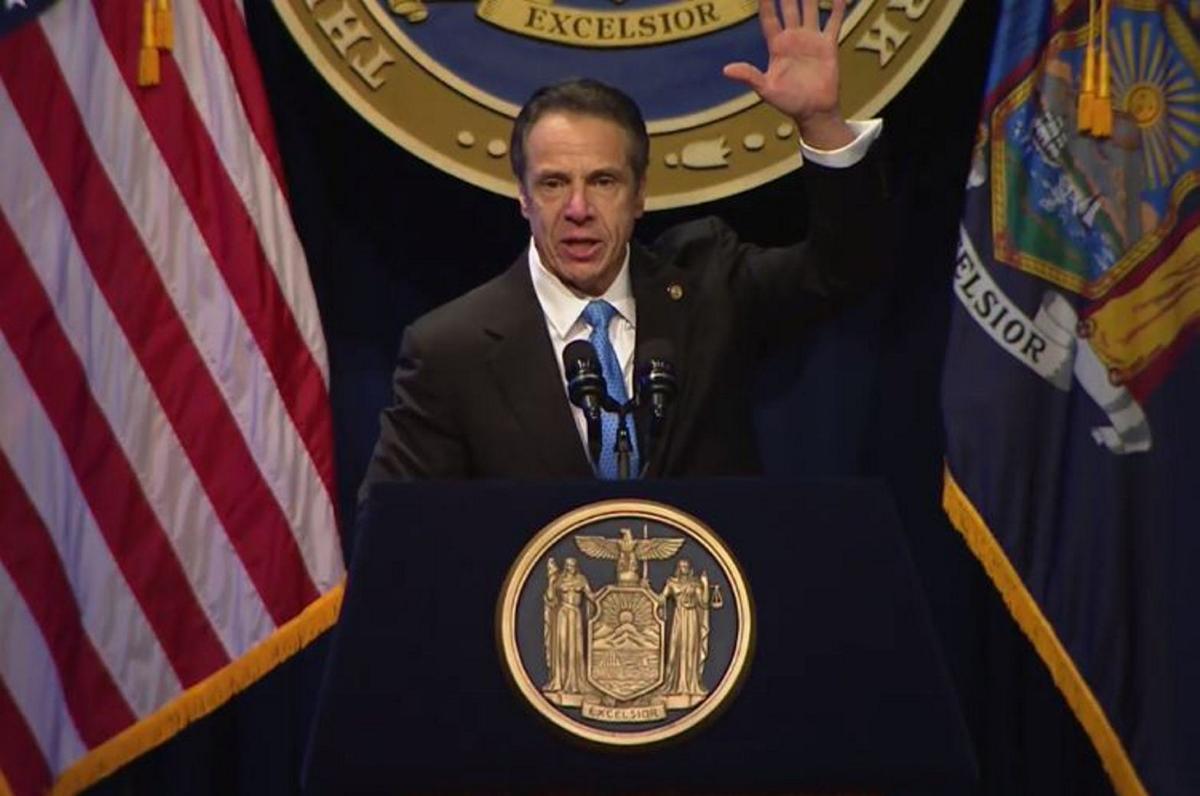 Courtesy of Gov. Andrew Cuomo’s OfficeMembers of New York state’s faith community applauds as the governor speaks out about fighting hate crime during the annual State of the State address in Albany. Melanie Lekocevic

ALBANY — Unity, equality and progressiveness were themes and values heavily stressed by Gov. Andrew Cuomo during his 10th State of the State Address at the Empire State Plaza Convention Center on Wednesday.

But the governor’s main point he started and ended with addressed the rise in hate crimes the country and state have seen over the years, particularly the number of anti-Semitic crimes downstate over the past few weeks.

“Our ship of state is stronger than it has been in decades,” Cuomo said. “But the ocean we navigate is as much a tempest as we’ve seen. Waves of anxiety are being fanned by winds of anger and division, creating a social and political superstorm.”

He ended the address on the same note, introducing the New York Hate Crime Anti-Terrorism Act.

The legislation would make what Cuomo calls a “domestic act of terrorism” motivated by hatred a felony punishable by up to life in prison without parole.

Individuals over the age of 18 who intend to kill five or more people because of their real or perceived race, gender, gender identity, religion or religious practice, sexual orientation, age, disability or ethnicity — and who kill at least one person — will be subject to this charge.

“In this turmoil, let New York State remind the nation of what we are,” Cuomo said. “And let’s reclaim at this time the simple truth that without unity, we are nothing.”

Cuomo was met with a roaring applause and standing ovations from the hundreds of elected officials and community members in attendance, some people wiping tears from their faces.

Throughout the rest of his address, Cuomo highlighted many proposals his office has slowly been unveiling over the past few weeks, like banning styrofoam, ending the pink tax, banning fentanyl, increasing access to medical-assisted treatment of opioid addicts and tightening rape charges.

But the governor also discussed a range of new proposals for New York in 2020.

Cuomo called climate change the most “transcendent threat of our time” and proposed a $3 billion Restore Mother Nature Bond Act that would fund natural restoration and resiliency programs across the state.

“No economy strategy, no social justice reform, no education policy, will be worth a damn if we don’t have a planet to live on,” he said.

In addition, he wants to update and expand the state’s emergency response capacity and drive the state toward an electronic vehicle future.

Cuomo also laid out a plan for an “economic justice crusade.”

Again, Cuomo put the legalization of recreational marijuana on his agenda for the new decade, saying communities of color have for too long been disproportionately impacted by the drug’s criminalization.

“This year, let’s work with our neighbors to coordinate a safe and fair system and let’s legalize adult use of marijuana,” Cuomo said.

His proposals include working side-by-side with other states that have legalized recreational marijuana to create a cannabis program that would stimulate the economy and protect consumers.

Cuomo also wants to create an Office of Cannabis Management to regulate marijuana use, both recreationally and medically. The office would oversee market structures, market entry and social equity licensing, while also prioritizing a reversal of the disproportionate impact the criminalization of marijuana has had on communities of color.

But Cuomo is approaching the legalization with caution. He proposed a minimum age of 21 to legally use recreational marijuana and is pushing for a partnership with SUNY to create a Global Cannabis Center that would research toxicity, bioavailability and dosing mechanisms.

His office estimates legalization will create thousands of jobs and generate $300 million in tax revenue, which some speculate would go toward closing the $6 billion budget gap the legislature is facing this year.

Cuomo is also turning his eye toward the agriculture industry.

As the agriculture industry across the country and state continues to suffer downward economic trends, Cuomo proposed multiple plans to protect and integrate the industry more with the community-at-large, diversify the field and promote sourcing local farms.

A Blue Ribbon Task Force will be created to suggest operating standards for growers, producers and retailers in the state, which Cuomo said will inform consumers and prevent food-borne illnesses.

A group of food system thought leaders are also to come together to develop plans to use local produce more in schools. Already kicking off this year will be a pilot program to use bulk milk dispensers in cafeterias, rather than individual milk cartons, to reduce waste.

One of the populations Cuomo is seeking to increase protections and resources for is veterans.

The governor highlighted issues of homelessness, suicide and education among the veteran population that he wants to tackle in 2020.

“We do not view society from the penthouse, we view it from the ground level. And from the ground level we see too many of our brothers and sisters sleeping on the streets,” Cuomo said. “There are only two factors for a solution: commitment of resources and competence of administration.”

Cuomo proposed committing the largest amount of funding to help the homeless and build affordable housing.

For veterans, the amount is $5 million. The Homeless Housing and Assistance Program will receive the funds to expand permanent housing services for homeless veterans.

Cuomo also plans to arm the Office of Temporary and Disability Assistance with a Veteran Homelessness section and connect them with local Division of Veterans Services to pinpoint homelessness issues and solutions specific to certain areas.

With the collaboration, the state hopes to guarantee permanent housing for veterans within 90 days of becoming homeless, and provide temporary housing in the interim.