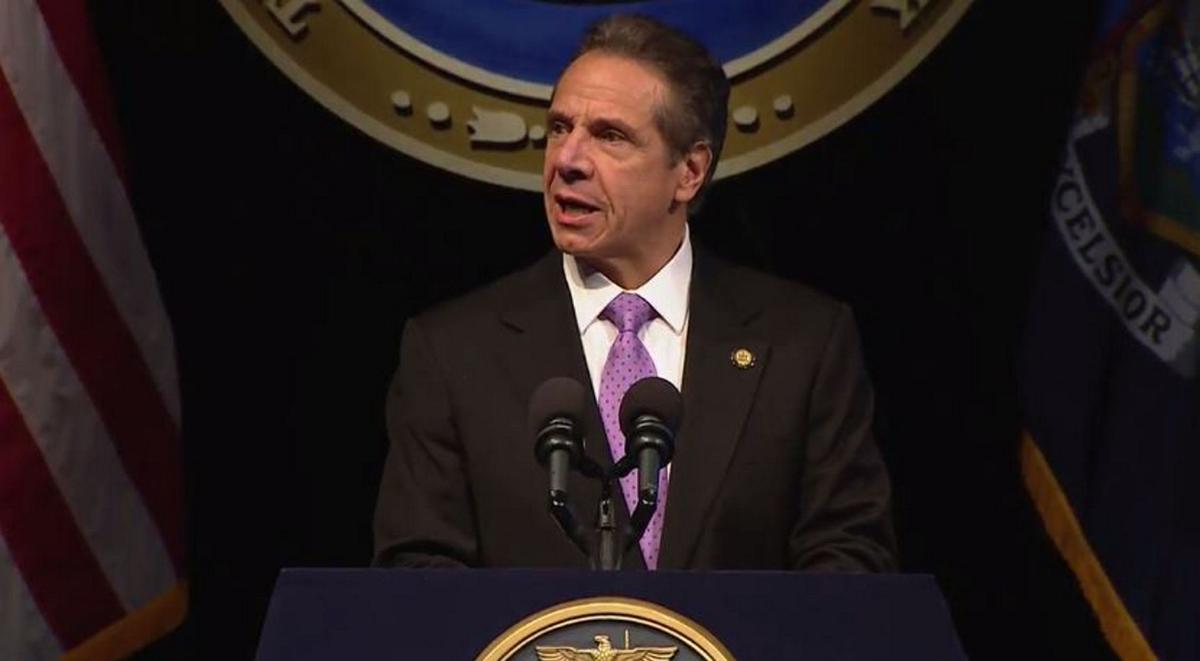 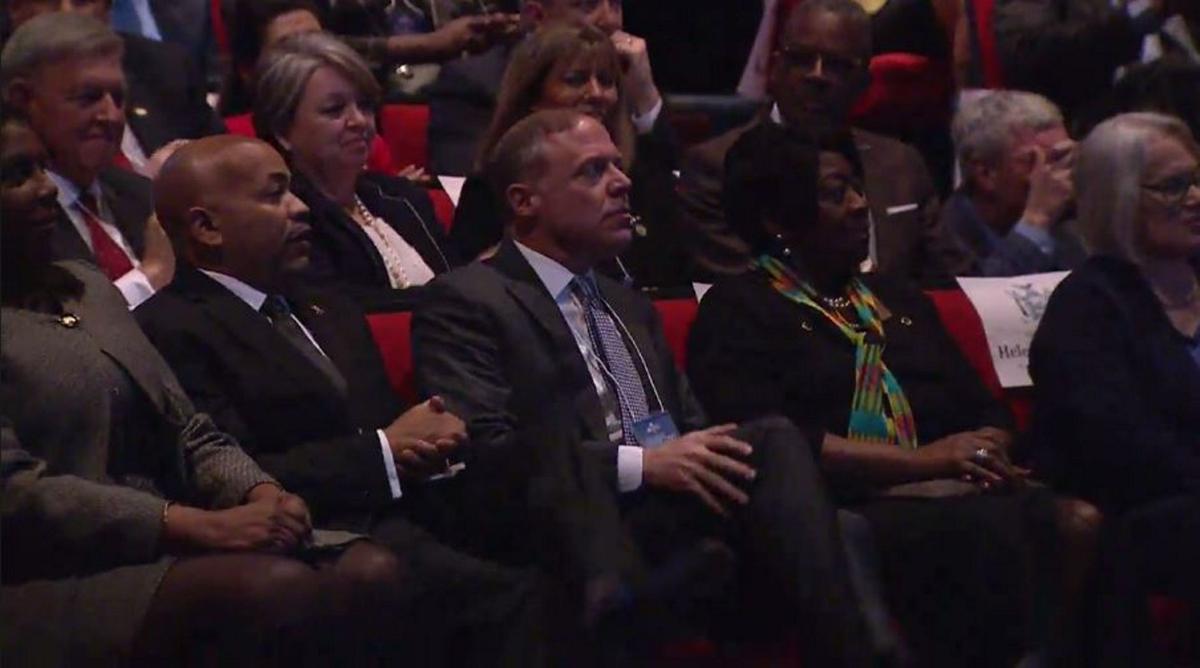 An audience of senators, assembly members and other state officials listen to Gov. Andrew Cuomo as he delivers the $178 billion proposed budget for New York in 2020 Tuesday at The Egg in Albany. Assembly Minority Leader William A. Barclay, R-Pulaski, is seated third from the left in the front row, while Sen. Patricia A. Ritchie, R-Heuvelton, is in the row behind Mr. Barclay, second from left. Courtesy of the Office of Gov. Andrew Cuomo 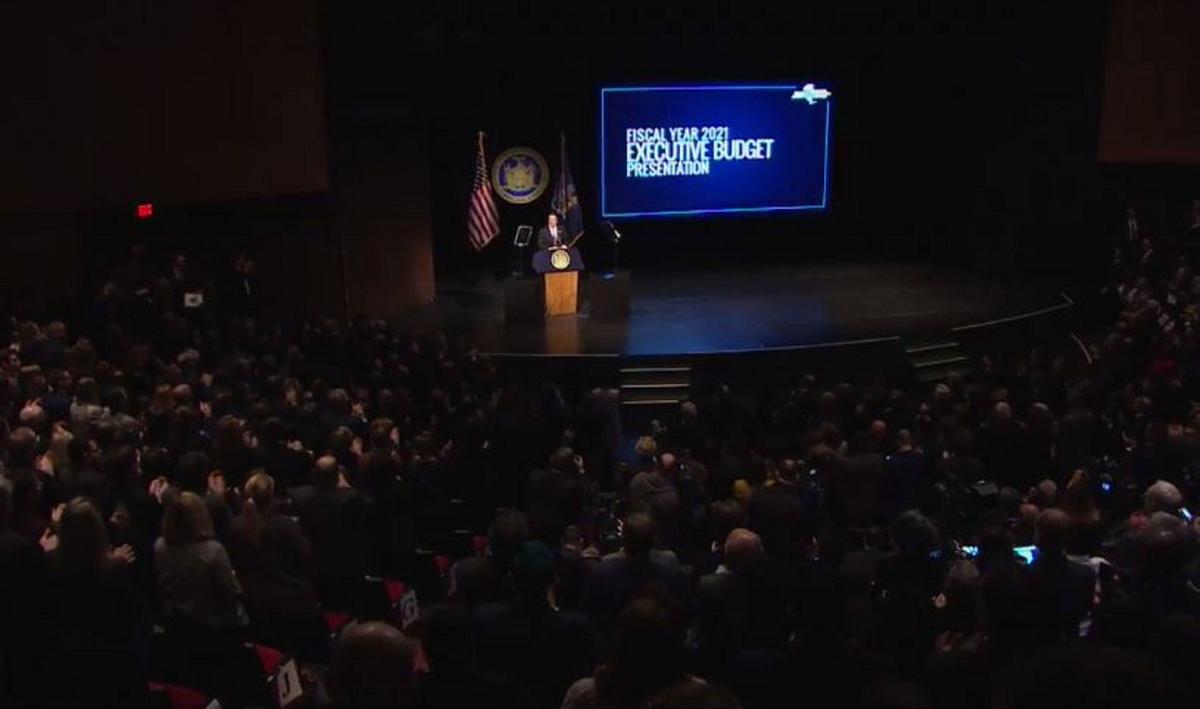 Gov. Andrew Cuomo begins his presentation of the 2020 state budget proposal before a standing-room-only audience of assembly members and senators at The Egg in Albany on Tuesday. Courtesy of the Office of Gov. Andrew Cuomo

An audience of senators, assembly members and other state officials listen to Gov. Andrew Cuomo as he delivers the $178 billion proposed budget for New York in 2020 Tuesday at The Egg in Albany. Assembly Minority Leader William A. Barclay, R-Pulaski, is seated third from the left in the front row, while Sen. Patricia A. Ritchie, R-Heuvelton, is in the row behind Mr. Barclay, second from left. Courtesy of the Office of Gov. Andrew Cuomo

Gov. Andrew Cuomo begins his presentation of the 2020 state budget proposal before a standing-room-only audience of assembly members and senators at The Egg in Albany on Tuesday. Courtesy of the Office of Gov. Andrew Cuomo

The governor’s nearly $178 billion proposal is a roughly 2% increase over the previous year, and includes legislation and funding allocated for infrastructure, environmental initiatives and Medicaid — some of which he previewed during his State of the State address at the beginning of the month.

“You can be a progressive and be fiscally sound,” Cuomo said to the audience at The Egg in downtown Albany. “The answer is to reduce the level of growth, not cuts, and that’s exactly what we have done in this budget.

Of largest concern to most municipalities and legislators has been Medicaid funding, which makes up about $4 billion of the state’s deficit. During his Jan. 8 State of the State address, Cuomo suggested the state could potentially shift Medicaid spending back onto localities, spreading panic and confusion among agencies and municipalities.

Cuomo quelled those concerns during his budget address.

“I know many of (local governments) are fearing we would go back and undo what we did in 2013,” Cuomo said. “We don’t do that and it won’t impact beneficiaries. But local governments have to have a financial stake in the game. We have to get those increases under control.”

Cuomo proposed that localities have to stay within the 2% tax increases, and that they cannot exceed 3%. Otherwise, localities will have to assume their Medicaid costs.

The MRT assignment also comes with conditions, including not harming local governments or beneficiaries, and rooting out “waste, fraud and abuse.”

The New York Greater Hospitals Association expressed optimism about the MRT plan in an emailed statement.

“We will work closely with all stakeholders in the MRT process to fix Medicaid’s structural problems and the incentives driving unnecessary growth while ensuring that hospitals, nursing homes and home care workers continue to have the ability to deliver high-quality care,” said Kenneth Reske, the association’s president.

The governor also addressed rising tension and conflict over the bail reform laws passed last year, which release individuals charged with misdemeanors and nonviolent felonies pre-trial. Cuomo said he and legislators would have to “act on information and not hyperbole.”

“Reform is an ongoing process,” he said. “Let’s understand the facts and consequences and discuss it rationally and make the decisions that we need to make, and we will do that as we move forward in the coming weeks.”

Advocates were swift to criticize Cuomo.

The Legal Aid Society called the governor’s proposal to go back to the drawing board a “slap in the face to communities of color who have shouldered the brunt of a racist and carceral criminal legal system” and in an emailed statement urged the state government “to resist calls to revert to a system that ignored the presumption of innocence and inflicted punishment on New Yorkers without any finding of guilt, solely because they lacked the deep pockets to purchase their freedom.”

The budget proposal also includes an $826 million increase for school aid, a 3% increase, and ensures the vast majority of that funding — 85% — goes to high-need schools and districts.

The funding is a mere fraction of the $4 billion the state owes to Foundation Aid, according to the state Education Department. The allocation of funding addresses concerns voiced over the Foundation Aid formula, which education advocates said is botched and doesn’t distribute appropriate funding to the individual schools that need it most.

“Education is the civil rights injustice of our day,” Cuomo said, met with a roaring applause from Democrat and Republican legislators alike. “The current formula is designed to achieve political needs, not equity. Use your state funds to equalize the disparity in the funding.”

The Empire State budget is in near freefall, in no small part due to lower revenue from middle class and upper class workers, while states like Texas and Florida are in surplus. Governor Cuomo reported a $6.1 billion hole in the state budget earlier this year, caused largely by oppressive policies that have gutted the local population and economy. More than 450,000 people moved out of New York in the last year alone. What’s even worst is that more than 46 percent of New Yorkers of all ages moving out of the state are in the bracket earning above $150,000. Not only do you have population flight you have wealth flight… Thanks Cuomo...

If there were a public option (or single payer or even ACA without the sabotage) at the federal level we wouldn't have such an expense of state medicaid would we? Just one example of how undermining good government programs polarizes us. Some see it as proof that government is no good and others take it as a sign that the government just has to try harder.

Ahh, yes, single payer, a euphemism for “government-run,” “single-payer” means that instead of every person in the marketplace paying for his or her own healthcare, there’s just one payer. A monopsony. f a free lunch doesn’t exist, then a free colonoscopy can’t either. Neither doctor salaries nor cardiopulmonary bypass pumps are cheap, and the money to pay for them has to come from somewhere. A bigger problem is the fact that nearly 1 in 3 New Yorkers are on Medicaid. Amazing, not a very healthy State one would say.