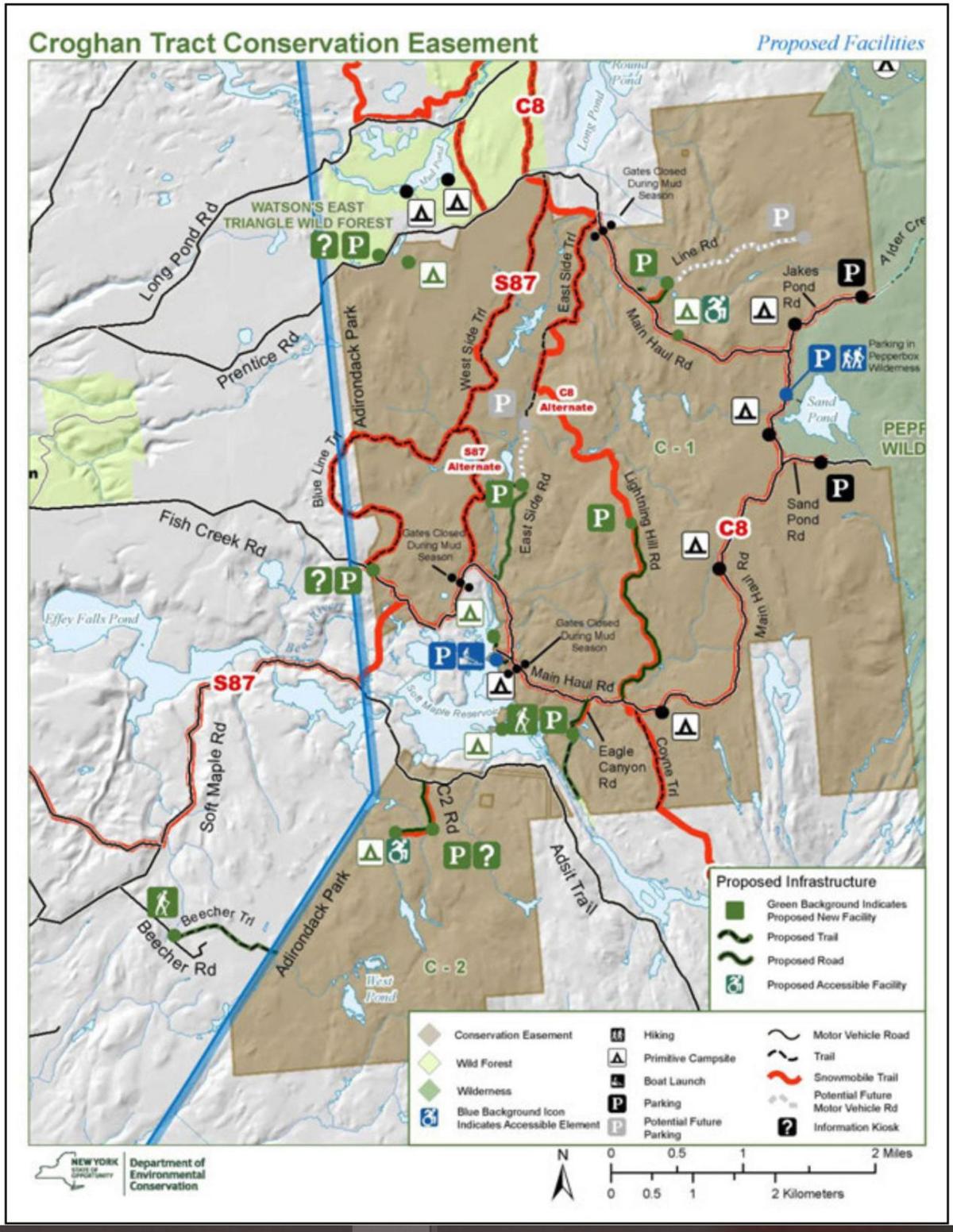 Additional trails, campsites and kiosks are among the new features to encourage public recreation on the privately owned land with working forests, the Croghan Tract Conservation Easement. The DEC is seeking public comment on the draft plan for recreation until March 19. Map provided 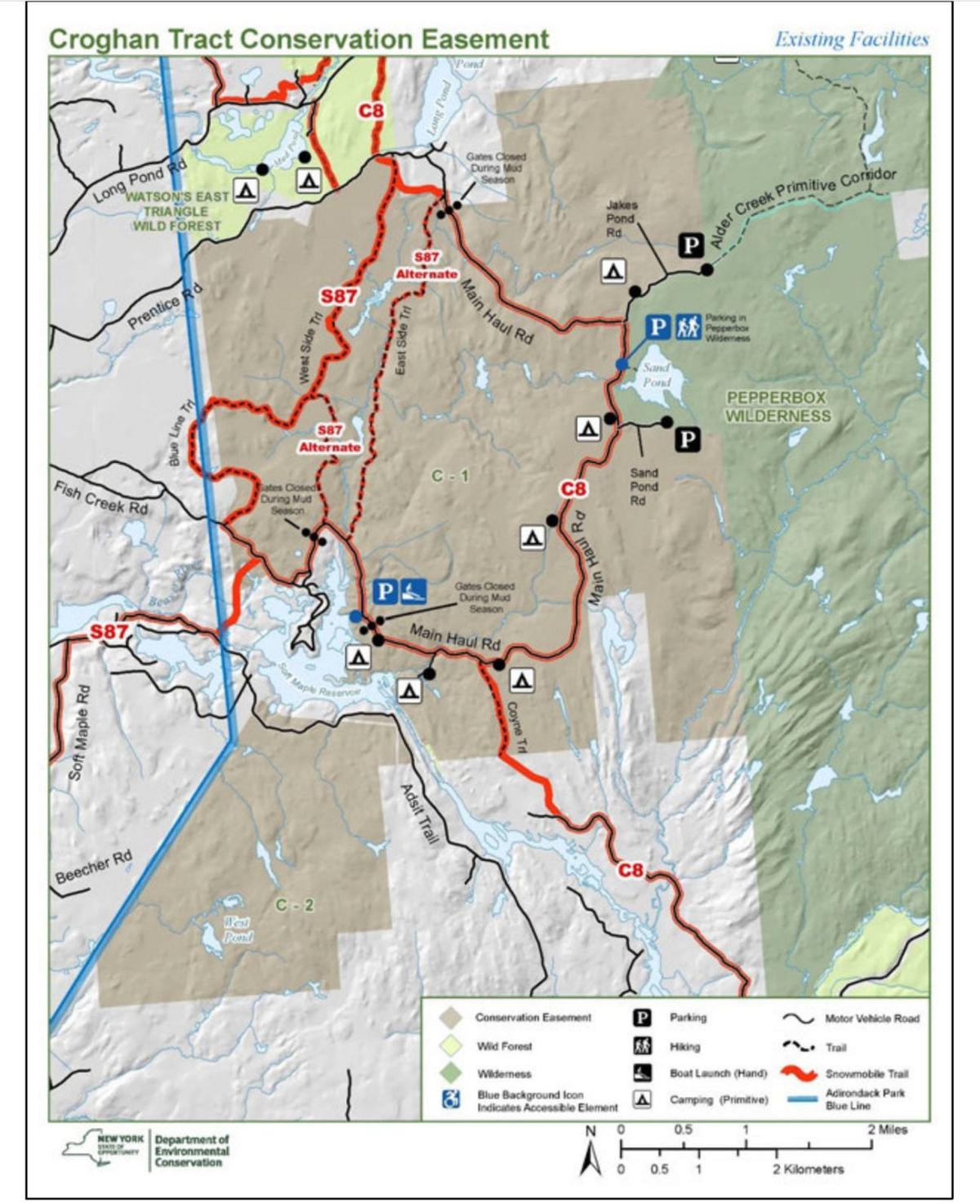 The recreation facilities that currently exist on the Croghan Tract Conservation Easement have been managed by the “temporary” recreation management plan created by the DEC in 2000. The agency is now seeking public opinion on the new draft plan released on Wednesday. Map provided

Additional trails, campsites and kiosks are among the new features to encourage public recreation on the privately owned land with working forests, the Croghan Tract Conservation Easement. The DEC is seeking public comment on the draft plan for recreation until March 19. Map provided

The recreation facilities that currently exist on the Croghan Tract Conservation Easement have been managed by the “temporary” recreation management plan created by the DEC in 2000. The agency is now seeking public opinion on the new draft plan released on Wednesday. Map provided

CROGHAN — Public recreation on more than 12,800 acres of privately owned managed forest in the towns of Croghan and Watson has a new plan that was 20 years in the making, proposed by the Department of Environmental Conservation.

The DEC is seeking public feedback about the plan until March 19.

The DEC will hold a public meeting at its Lowville office, 7327 State Route 812, at 6 p.m. Feb. 26 to provide information, answer questions and take comments on the draft recreation management plan for the Croghan Tract Conservation Easement.

“The conservation easement... [on] the Croghan Tract is meant to ensure that the property will remain a privately-owned sustainable working forest, protect natural resources, allow for private recreational leases and for specific public recreation opportunities,” the management plan states.

The tract, located just inside the Adirondack Park’s blue line and next to the Pepperbox Wilderness area and Watson’s East Triangle Wild Forest, is a forest managed by Molpus Woodlands Group, LLC, for one of its funds called Jackson Timberland Opportunities — Champion LLC since 2014.

It consists of two parcels separated by the Beaver River which houses regular logging activity and 11 private club leased camps with two more that have been approved for construction.

There are a number of creeks, tributaries, ponds and wetlands on the hard and soft wood tract as well as the Soft Maple Reservoir.

Although the acreage on the tract was listed at 13,054 acres in the temporary management plan created in 2000, the current tract no longer includes a parcel in the town of Webb in Herkimer County.

The state purchased the conservation easement on the Croghan Tract in 1999 as a “biologically and economically sustainable working forest,” to conserve wildlife habitat and natural resources, and to allow the public access to the land for recreation, according to the draft recreation document.

There are currently 11 miles of road for public passenger vehicle use on the land to which the plan will add 5.3 miles on four roads. Additional road improvements in the future and a gate for the Main Haul Road beyond the Soft Maple Reservoir are also recommended.

There are currently 19.7 miles of designated snowmobile trails through the Croghan Tract. That will increase to 28.6 miles with the addition of alternative routes during logging in trail areas and other rerouting as needed.

“No public ATV use is proposed at this time” in the easement, the plan states, primarily because of damage that has been recorded by the off-road vehicles to “forested landscapes” and the challenge keeping riders off old forest management and snowmobile trails.

While there aren’t any foot trails in the Croghan Tract currently, construction of a 0.6-mile hiking trail, the Eagle Canyon Trail, from Main Haul Road and a 0.9-mile Beecher Trail from Beecher Road will be created under the plan, along with walking trails to two campsites on Soft Maple Reservoir.

The plan continues to allow bicycle and horseback riding on all roads, snowmobile trails and forest management trails, and paddling is allowed on all bodies of water in the tract.

The draft plan recommends nine campsites, two of which will be handicap accessible. Camping will also be allowed at undesignated sites at least 150 feet from bodies of water, wetlands, roads or trails.

Information kiosks will also be constructed at the ends of Main Haul Road and near the parking area in the area south of Beaver River under the draft plan.

The cost to implement all of the additions to the plan including new trails, adding gates, signs and constructing new structures, culverts and bridges as needed is estimated at about $65,000, while the annual maintenance for all of the recreation infrastructure is estimated to be about $44,000.

The DEC webpage dedicated to the Croghan Tract does not appear to have an active link to the newly proposed draft management plan, only the original version from 2000. However, to obtain a copy of the full plan, email r6.ump@dec.ny.gov or call 315-785-2263.

Written comments on the draft plan can be sent to NYS DEC, Attn: Matt Nowak, 7327 State Route 812, Lowville NY 13367 or email the above address.

Have you cancelled or changed plans for group events with COVID-19?