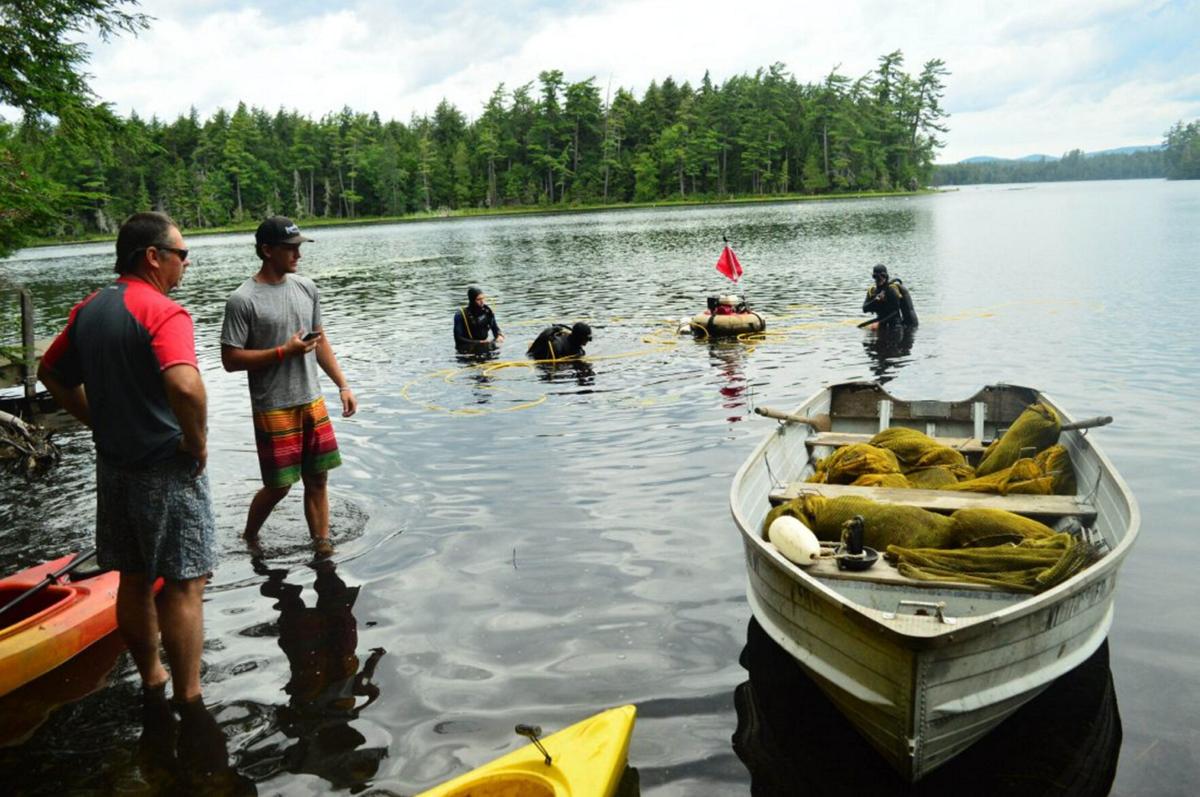 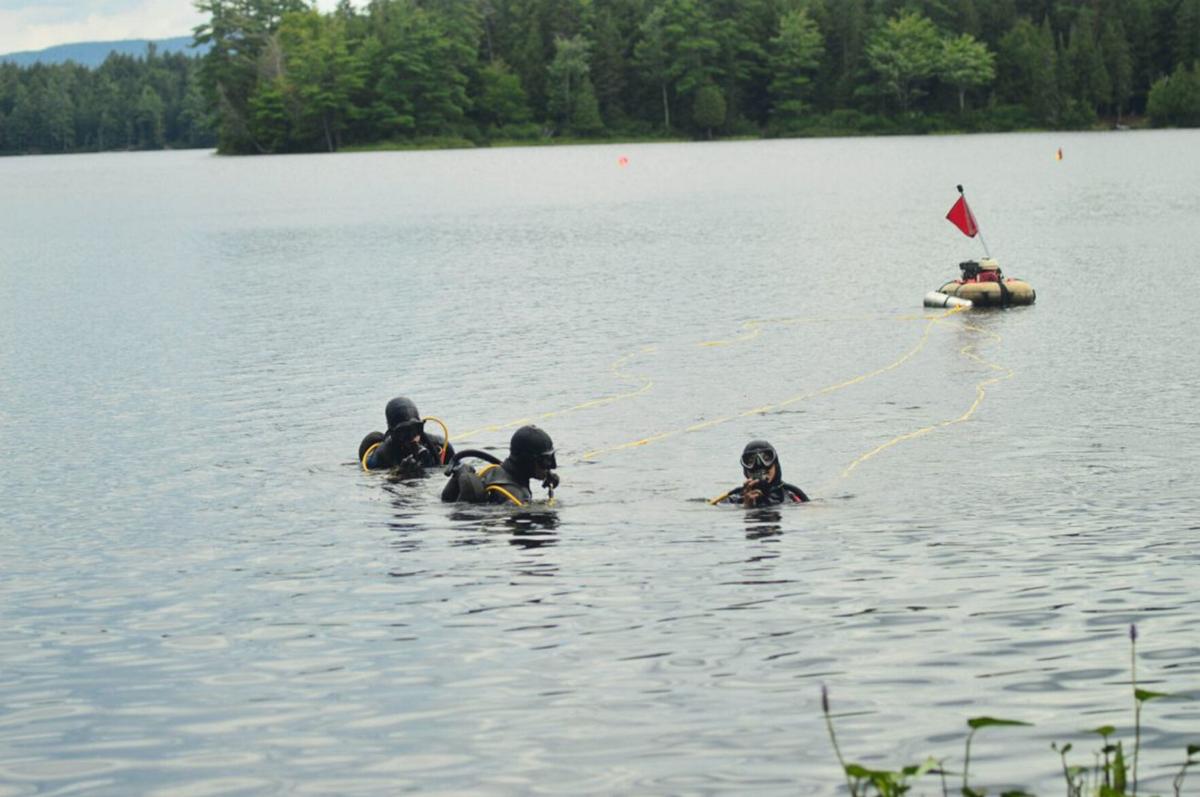 SARANAC INN — The Upper Saranac Foundation, having greatly reduced the invasive Eurasian watermilfoil in Upper Saranac Lake, has turned its attention to clearing the waterways that feed the lake. A three-person dive team had already pulled 3,600 pounds of milfoil from Follensby Clear Pond in a week, as of Wednesday.

USF Lake Manager Guy Middleton said the crew, from the Invasive Solutions Dive Company, was hired by USF to do this work with funding from a $15,000 grant from the Lake Champlain Basin Program.

Middleton said the divers will remove most of the milfoil in an 18-acre infected area in the 280-acre state-owned pond through the end of the day today, and return in September to remove any regrowth.

After the invasive species was detected in Upper Saranac Lake in 1996, the foundation began aggressively harvesting it in 2004, removing 18 tons of the long, stringy plant in that first year. Last year, they could only find 300 pounds in the 5,000-acre lake.

“It’s a success story,” Middleton said. “It’s gone from a plant that was one of the more abundant plants on the lake to now, a rare plant that is actually hard to find.”

As he spoke, an air compressor floating on an inflatable ring drifted closer to shore, towed by three divers, still unseen under the surface.

Sarah Calzada, Julien Desmangles and Larry Gingell emerged, each carrying a 25-pound bag of the wet, green stuff and smiling. This is good work, they said.

The air compressor is part of a “hookah rig,” which involves the compressor and breathing control devices feeding three hoses, each running to a diver’s mask.

While oxygen tanks allow divers to stay below the surface for 30 to 60 minutes, this system allows them to swim around the pond floor for hours at a time, pulling the milfoil out by its roots, by hand.

“It’s good for them to come up and see daylight,” Middleton said.

“It’s just a whole new world down there,” Calzada, the crew leader, said. “It’s kind of like you’re flying.”

They work 10-hour days doing three dives a day. They may spend two to three hours underwater at a time, but Calzada said “time kind of goes by pretty fast down there.”

They rip the plant out by hand, which is more expensive and laborious than other methods, but more sustainable.

This method costs around $6,000 a week, Middleton said.

He said there are weevils that eat milfoil that could be used, but they are not native to the Adirondacks, so he thinks introducing them would be a bad idea. Chemicals and machines can also be used, but they can do separate damage to the ecosystem,

Middleton said some locations are so overgrown with the plant that he has heard of people using hay harvesters to chop them down.

Middleton said they are “frontloading” the work this year, knocking down as much milfoil as possible, and the USF has committed to doing ongoing maintenance in future years. He said the success they have had in Upper Saranac Lake should be a model for other invasive removal projects. He said it is now unusual to get a full 25-pound bag from the water.

Calzada said there was a distinct difference in milfoil density between getting into the water on Monday and diving on Wednesday.

Milfoil, when it grows thick, chokes out other native plant species and limits the water’s recreation use.

Fish love lots of plant cover, so at first, Middleton said, it provides a good environment for fish to thrive. But when it grows too thick, it chokes out even the fish, who cannot get through the dense plant life.

When it goes untreated, the invasive sprouting from the pond bottom is evident on the surface, he said.

“It would look like you could walk across it,” Middleton said.

Middleton said the invasive plant came from Eurasia, likely through intercontinental ships dumping ballast water in the Great Lakes, which smaller boats then carried to other regions, including the Adirondacks.

At this point, he said, most popular lakes have it.

“There are no predators; there’s nothing that impedes its growth,” Middleton said.

With no native species here to eat the plant, he said it can double in size every year.

When the divers remove a plant, they have to grab it out by the root ball in the muck, quickly stuffing it into their bag before it breaks. Each fragment can form a new plant.

The stalks, which can grow to 15 feet long, have roots all along the plant that eventually break off and settle in the water bed, each sprouting a new stalk.

The plant grows in “littoral zones” near the shore, anywhere the sun can penetrate the water and there is soft soil. Middleton said they can grow on lake floors up to 18 feet deep, depending on the clarity of the water.

Middleton said if it is caught early, milfoil can be eradicated from the waters, but that if it gets a hold, management is the best option for many years. He said the USF is as close to eradicating it from Upper Saranac Lake as it will likely ever get, but as long as the waterways that feed the lake contain milfoil, it will, too.

That is why they have expanded their work into tributaries, working their way upstream. Three years ago the foundation started work in Fish Creek Ponds — which connect Upper Saranac Lake and Follensby Clear Pond — with a $100,000 grant, and have removed 20 tons of milfoil since.

After it is removed, the milfoil is brought to an employee of Invasive Solutions Dive Company who composts it to use in his gardens or feeds it to his pigs.

ISDC also does work on Lake Placid, Glen Lake, Schroon Lake and Mountain View Lake, and there are other companies in the area which do milfoil removal, too.

Middleton said the Upper Saranac Foundation relies on donations from shore-owners and others, as well as grants like the one from Lake Champlain Basin Program.