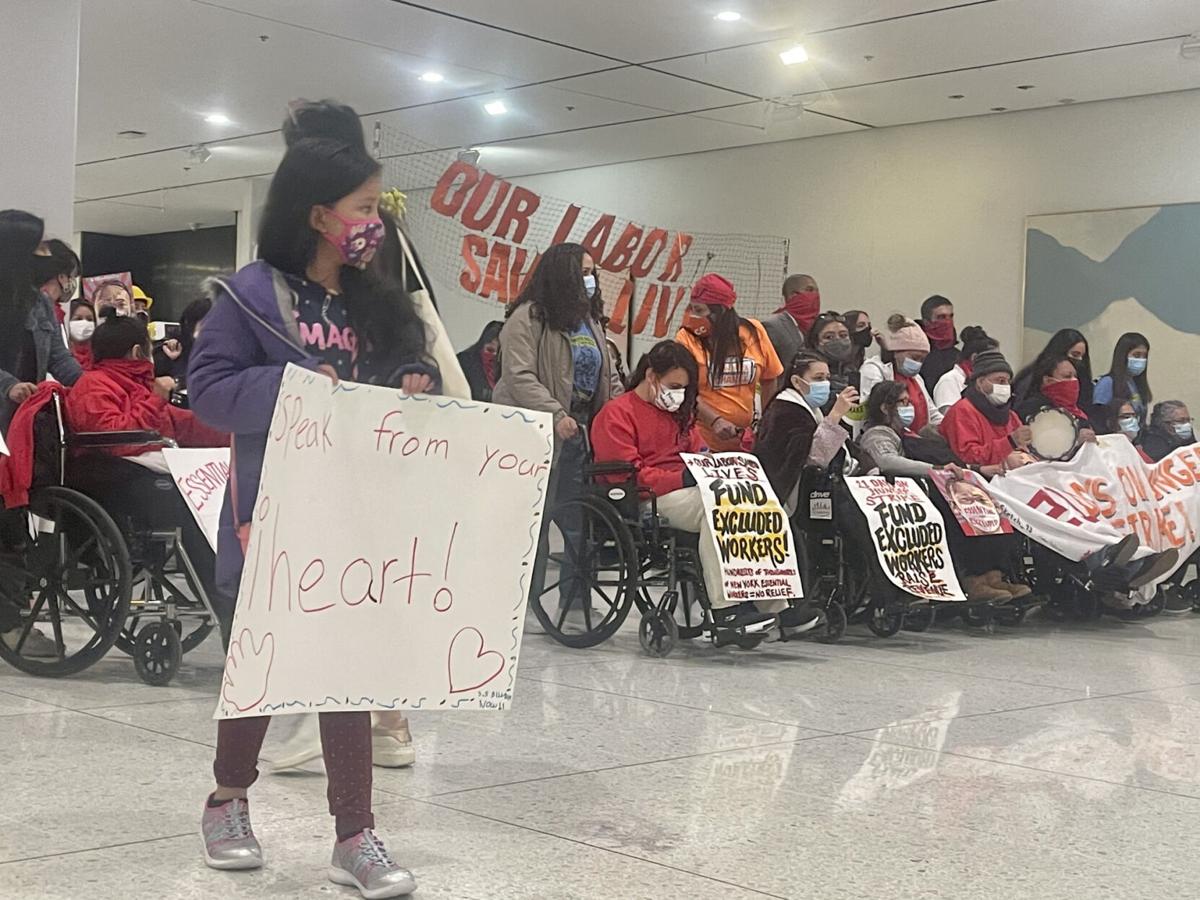 Chelsea, a 9-year-old Stottville girl, marches in the Empire State Plaza on Monday with hundreds of other immigrant families pushing for aid in the state budget for excluded essential workers. The Legislature included $2.1 billion for the excluded workers, including undocumented immigrants, in the final budget. Kate Lisa/Johnson Newspaper Corp. 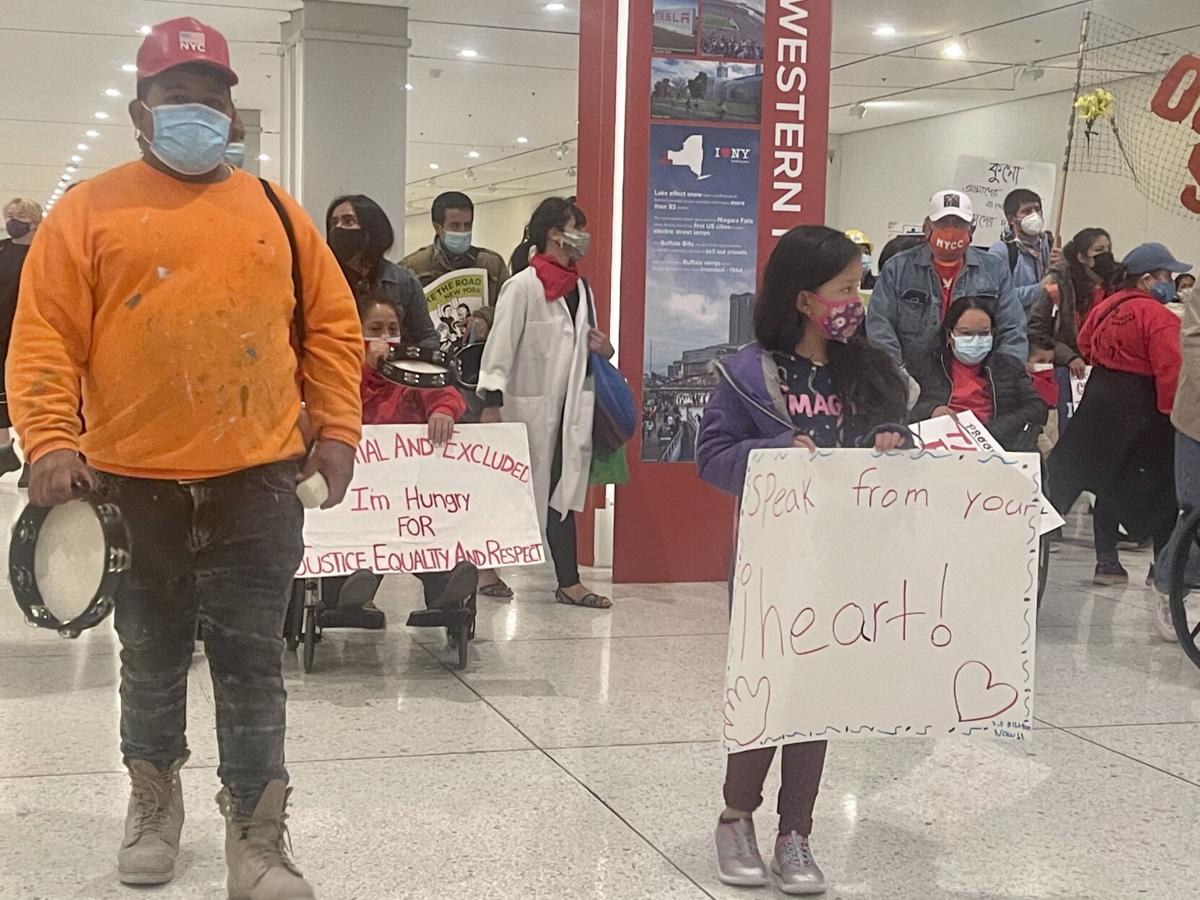 Nelson, an immigrant who lives in Stottville and member of Columbia County Sanctuary Movement marches with hundreds of activists in the Empire State Plaza on Monday to fight for funding to aid excluded essential workers. The Legislature included $2.1 billion for excluded workers in its final 2021-22 budget. Kate Lisa/Johnson Newspaper Corp.

Chelsea, a 9-year-old Stottville girl, marches in the Empire State Plaza on Monday with hundreds of other immigrant families pushing for aid in the state budget for excluded essential workers. The Legislature included $2.1 billion for the excluded workers, including undocumented immigrants, in the final budget. Kate Lisa/Johnson Newspaper Corp.

Nelson, an immigrant who lives in Stottville and member of Columbia County Sanctuary Movement marches with hundreds of activists in the Empire State Plaza on Monday to fight for funding to aid excluded essential workers. The Legislature included $2.1 billion for excluded workers in its final 2021-22 budget. Kate Lisa/Johnson Newspaper Corp.

ALBANY — Jairo Reyes did not eat for three days. Weak, tired and famished, he remembered his community when he found it difficult to focus.

Reyes, of Yonkers, was one of hundreds of New Yorkers to participate in a 23-day statewide hunger strike to raise awareness for funding for thousands of state essential workers excluded from unemployment benefits or stimulus checks for people who lost their jobs during the coronavirus pandemic.

The hunger pains, Reyes said, were worth it.

The state Legislature included a one-time $2.1 billion Excluded Workers Fund in its final 2021-22 budget, which the Assembly was expected to adopt Wednesday, for New York residents who lost wages or income after February 2020 because of COVID-related unemployment or inability to work or a COVID-related death or disability of the main source of household income.

“I was very emotional when I first heard about the fund,” Reyes, who does not speak English, said through Jirandy Martinez, executive director of the Mamaroneck Community Resource Center, who translated. “I was so emotional and very happy because what that fund means is now, worker families can have a little bit of extra income to support their families and they get something for their children, for food and to pay rent.”

The $2.1 billion will come from state tax revenue, including new higher taxes on state millionaires and billionaires set to impact about 50,000 of 19.4 million New Yorkers. The state will net $2.75 billion from increases on personal income tax this year, and $3.25 billion next year.

“I did it to support my community,” Reyes added of the fast. “I knew putting my body on the line would be not just for me, but keeping in mind all of the worker families and community that have been excluded from their state government, and even nationwide, for many, many years. I was doing it for my worker community and representing them.”

About 160,000 New Yorkers, including undocumented immigrants and cash economy workers, can apply for Excluded Workers Fund benefits. The excluded workers include migrant farm, construction, janitorial and other essential laborers.

Workers are eligible for two tiers of benefits awarded by a point system after the person proves their residency and identity. To receive the top level of benefits, up to $15,600 pre-taxes, workers must have filed a tax return for 2018, 2019 and 2020 using a valid ITIN number.
A letter from an employer showing dates of work or six weeks of pay stubs to prove residency can fulfill application requirements for either assistance amount.

The benefits will be taxed at about 5%, or similar to federal unemployment insurance.

Reyes worked as a welder for nine years, but his employer required him to quarantine for two weeks, twice, after his father-in-law became infected with COVID-19 last spring. Reyes wasn’t allowed to return to work even after proving he was not sick. His company’s secretary suggested they had too many older people working there, and suggested he apply for unemployment, he said.

“It is difficult to do it in a way that can be administered without fraud, and that’s obviously a major concern for us that we protect every tax dollar,” the governor said during a budget briefing Wednesday, adding the state had significant fraudulent unemployment applications through the COVID-19 pandemic.

DiNapoli and James’s reviews will include program guidelines, rules and anti-fraud protections.

James assured New Yorkers her office will ensure the fund will be distributed through a fair and equitable process in a statement Wednesday night.

“Upon review of the excluded worker legislation in the budget, we believe the Office of the Attorney General’s role will be to ensure the integrity of the process by verifying whether the regulations and the process being established are constitutional,” James said. “These duties are in line with our traditional role, and we look forward to performing them.”

A person cannot have received unemployment insurance or federal COVID-related stimulus checks or aid, and cannot have earned more than $26,208 within the last year to be eligible for the assistance.

Republicans and Democrats engaged in tense and spirited discussion about the excluded worker fund as session continued early Wednesday morning.

Sen. Dan Stec, R-Queensbury, railed against the majority for the Excluded Workers Fund, saying New Yorkers convicted of crimes or people without proper documentation should not receive benefits at the cost of state taxpayers.

“People who are aware of it are getting angry about it,” Stec said on the floor early Wednesday morning. “We were within hours of delaying paychecks to 39,000 state employees because we couldn’t agree on this $2.1 billion ... It really rubs a lot of people the wrong way. People are here legally, they work hard, they live by the rules, they pay taxes and they’re the ones who are going to foot the bill.”

The senator voted against the measure.

Republicans in both chambers spoke out against the fund expressing varied concerns. Some lawmakers said the $2.1 billion will encourage more undocumented immigrants to come to New York. Others argued, before voting against the Aid to Localities spending bill, that the increased taxes on the rich would accelerate New York’s outmigration rate, which is the highest of any state in the nation.

“These are beings, these are people, these are workers,” the senator said before voting for the fund he helped to negotiate. “They’re excluded and they are essential — essential because at the height of the pandemic when many of us were stuck at home ... who was delivering our food? Who was picking the vegetables and the fruits we continued to eat during the pandemic?

“We’re making history today and I feel proud of that.”

Cuomo’s executive budget, released in January, did not include the Excluded Workers Fund. Formerly incarcerated people remain ineligible for the Legislature’s $2.1 billion agreement.

CORRECTION: Due to a reporter’s error, an earlier version of this story misstated certain eligibility requirements for the Excluded Workers Fund. Undocumented immigrants and New Yorkers are required to have filed a tax return for 2018, 2019 and 2020 using a valid ITIN number to receive the top level of benefits, or up to $15,600 pre-taxes. Workers applying for the lower level of benefits, or $3,200 pre-taxes, only need to prove residency and identity and do not require tax filings.

“Excluded workers” including illegals and ex-inmates. Don’t worry massive tax hikes are on there way. Prime example of why people are moving out of NYS, especially millionaires and billionaires. Once these people move out of NY, no amount of taxes will save your state...