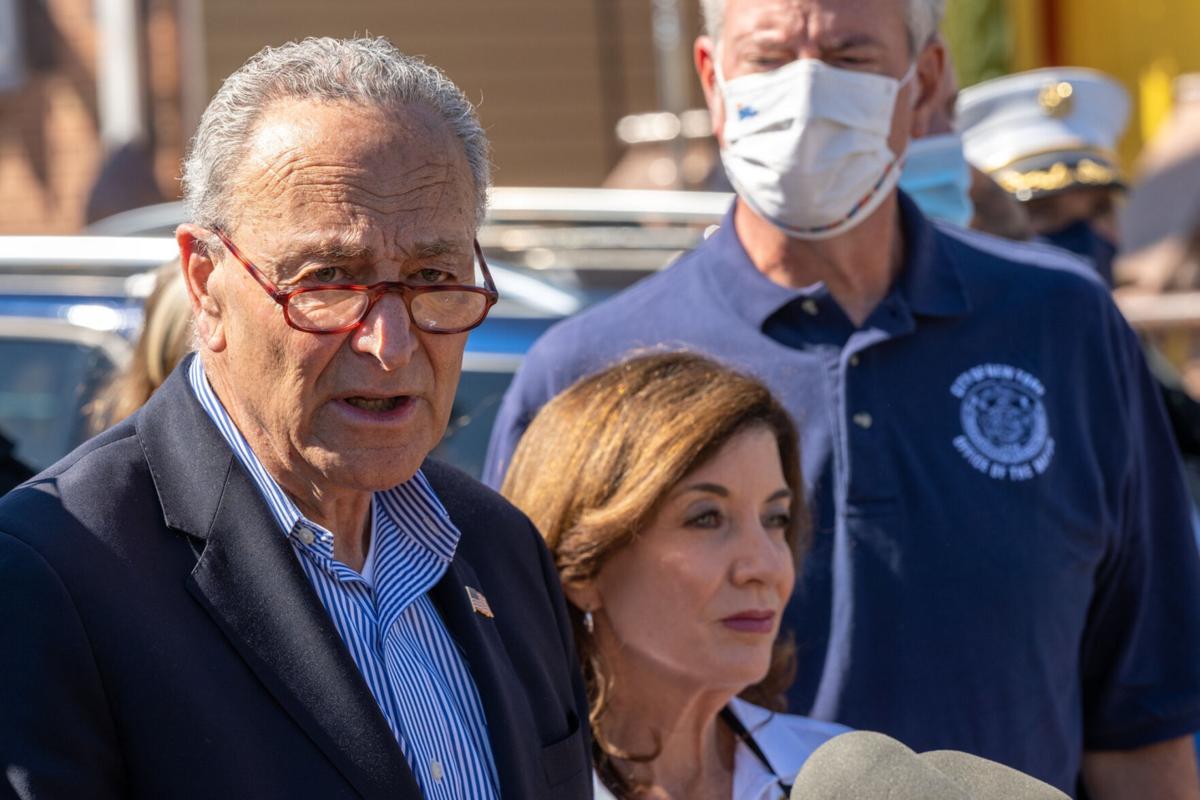 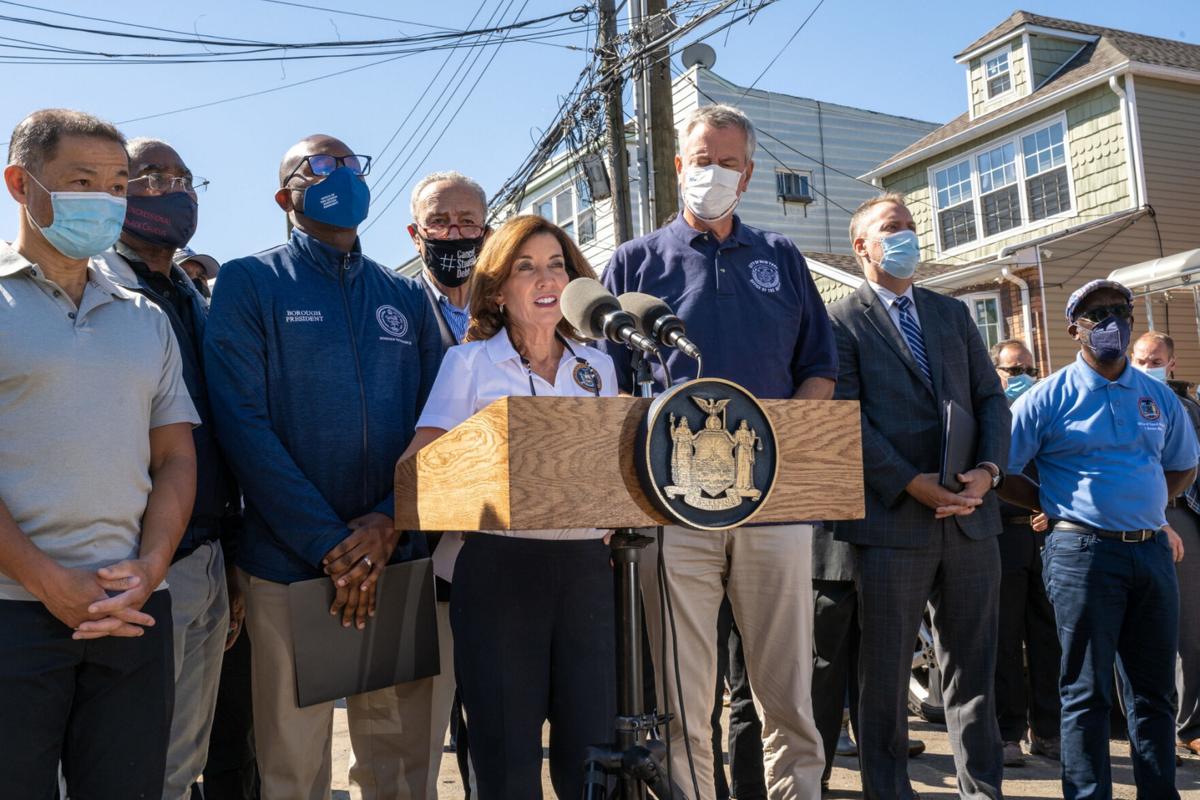 The storm is blamed for the deaths of nine New Yorkers and creating underground waterfalls that impacted subway services Thursday.

A record-breaking 3.15 inches of rain fell in Manhattan’s Central Park from 8:50 to 9:50 p.m. — blowing through an hourly rainfall ceiling of 1.94 inches set Aug. 21 in Mother Nature’s second significant weather event in 10 days.

Eight people died over the course of the several-hour storm, trapped by sudden floods that quickly flowed into their homes without warning. A ninth person was found dead inside a vehicle early Thursday.

“People were stranded,” Gov. Kathy Hochul said during a briefing in Queens on Thursday morning. “The fear that they must have experienced when this occurred I cannot imagine, and I don’t want this to happen again.”

Bryan Roman, an operator on the No. 1 line, was driving an uptown train into the 28th Street stop in the Manhattan subway station around 9:30 p.m. when he saw the water pouring into the station. He stopped the train with only its front car in the station.

“I couldn’t tell whether it was coming from the platform itself or the wall,” Roman said. “You can’t run a train when there’s water over the third rail. Luckily, I was able to stop before that point.”

The heavy rainfall forced Metropolitan Transportation Authority officials to suspend subway service across the city around 10 p.m., shortly before Mayor Bill de Blasio and Gov. Hochul declared states of emergency in the city.

Roman and the train’s conductor, Oneil Francis, helped evacuate their train, ushering riders through the doors between cars until they reached the front and could exit onto the platform.

“It turned into Niagara Falls,” Francis said. “People were taking photos when they got off the train. I’ve never seen anything like it.”

Subway and Long Island Rail Road services were suspended for several hours and continued to run on a limited schedule Thursday as emergency crews cleared debris.

Reporters were quick to ask the governor at two separate storm briefings Thursday why New Yorkers were not warned about the severity of the storm or to evacuate to a safe location.

Meteorologists forecasted between 3 and 6 inches of rainfall as of early Thursday afternoon, but Hochul said the predictions were not accurate, leaving New Yorkers stunned by the turn of events.

“We all monitor the same weather systems as anyone else,” she said. “...It’s very hard to get this precise.”

Hochul and her top aides will analyze the timeline of weather predictions and communication between state agencies about the forecasted storm and flood risks.

Once granted, the state will receive personnel, equipment, supplies and financial assistance from the federal government to assist with the continued response, rescue and recovery efforts. New Yorkers will also be eligible for temporary housing and funeral assistance.

The governor spoke with President Joe Biden about the relief Thursday morning.

“He said, ‘I guarantee you, I will approve any declaration you need,’ so we can get the money flowing to New York, to our municipalities, to our cities, to our citizens, the businesses affected and certainly to the homeowners,” Hochul said.

“Global warming is upon us,” Schumer said. “When you get two record rainfalls in a week, it’s not just coincidence. ... We must build resilient infrastructure so when floods or fires or anything else occurs, they are much more resistant. Woe is us if we don’t recognize these changes are due to climate change. Woe is us if we don’t do something about it quickly.”

Schumer said he would help secure money for city, state and local governments and small businesses in the wake of the storm’s destruction.

“We have experienced too many emergencies in the last decade,” Schumer said. “We will do everything we can do to get all the federal aid that’s needed. We will fight and make New York declared a disaster area.”

“Climate inaction has consequences. Last night’s tragic flooding downstate is a stark reminder that the climate crisis is here, and that New York’s leaders must make meaningful climate investments now,” according to a statement from the coalition Thursday. “It’s not just about the critically important task of reducing our emissions — we must also invest in resilient infrastructure, especially in marginalized communities. It’s no accident that poorer neighborhoods of New York City experienced worse flooding and storm effects last night. We don’t have to live like this. The legislature and governor must act now to fund the necessary climate and resiliency investments our communities so desperately need. We must pass the Climate and Community Investment Act and put our state on a rapid path towards a just and renewable economy.”

State Park Police and DEC’s Swiftwater Rescue Teams deployed with their specialized training and equipment from across the state to rescue individuals in distress from Tropical Storm Ida.

The Swiftwater Rescue Team deployed with a fully equipped rescue truck that included a rigid hull inflatable rescue craft suitable for flood and maritime rescues in both urban and wilderness environments. The Park Police Swiftwater Rescue Team staged out of Valhalla in Westchester County and were dispatched to Orangeburg in Rockland County to check hundreds of abandoned vehicles for individuals in distress, according to a statement from the state police union Thursday afternoon.

“There is far more to law enforcement than just enforcing laws,” said James Hy, director of the Park Police Superior Officers Association for the union. “The mission of our members first and foremost is to serve and protect, and PBANYS members do that in a variety of ways day in and day out. This often goes unnoticed, but tragically incidents such as Tropical Storm Ida do occur and put lives and property at risk on a massive scale. It is during these times that people become aware of the capabilities our agencies possess. While events such as Tropical Storm Ida are unavoidable, our members train and equip to prepare for them, hoping that day never comes.”