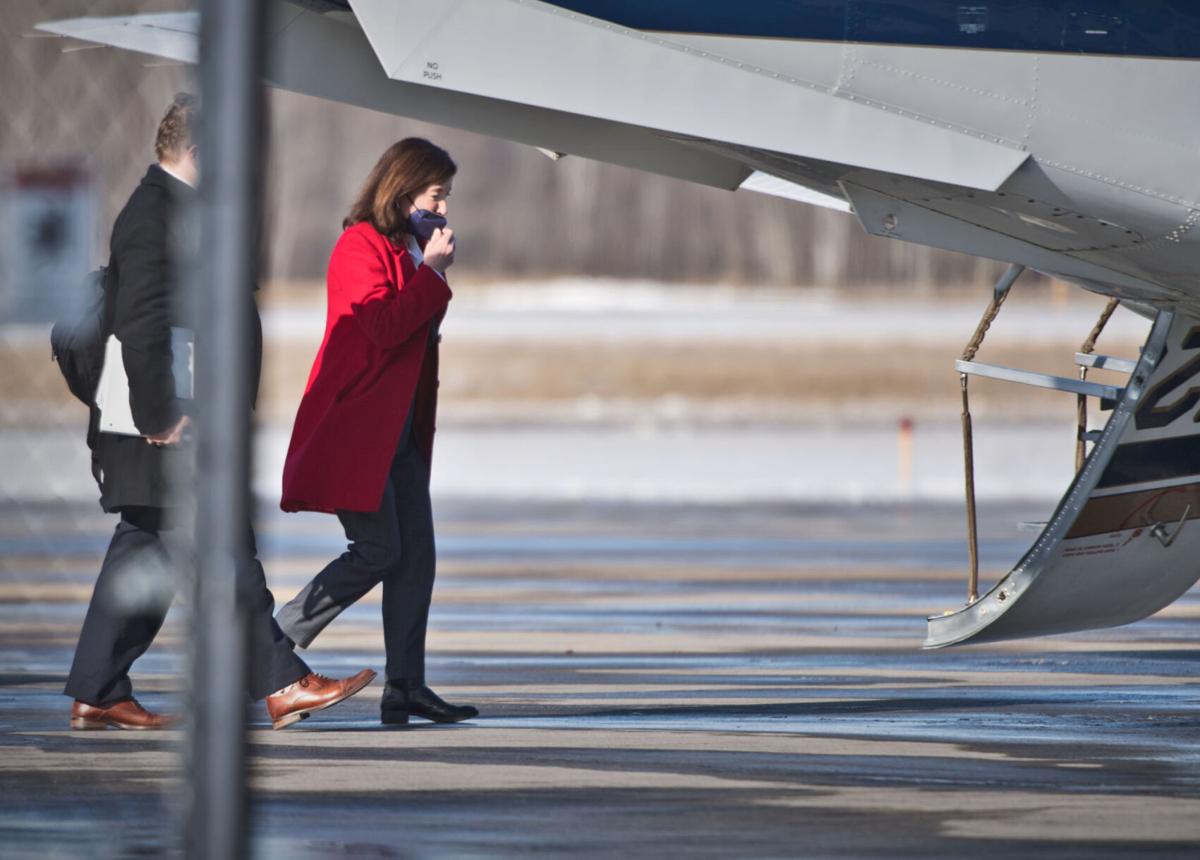 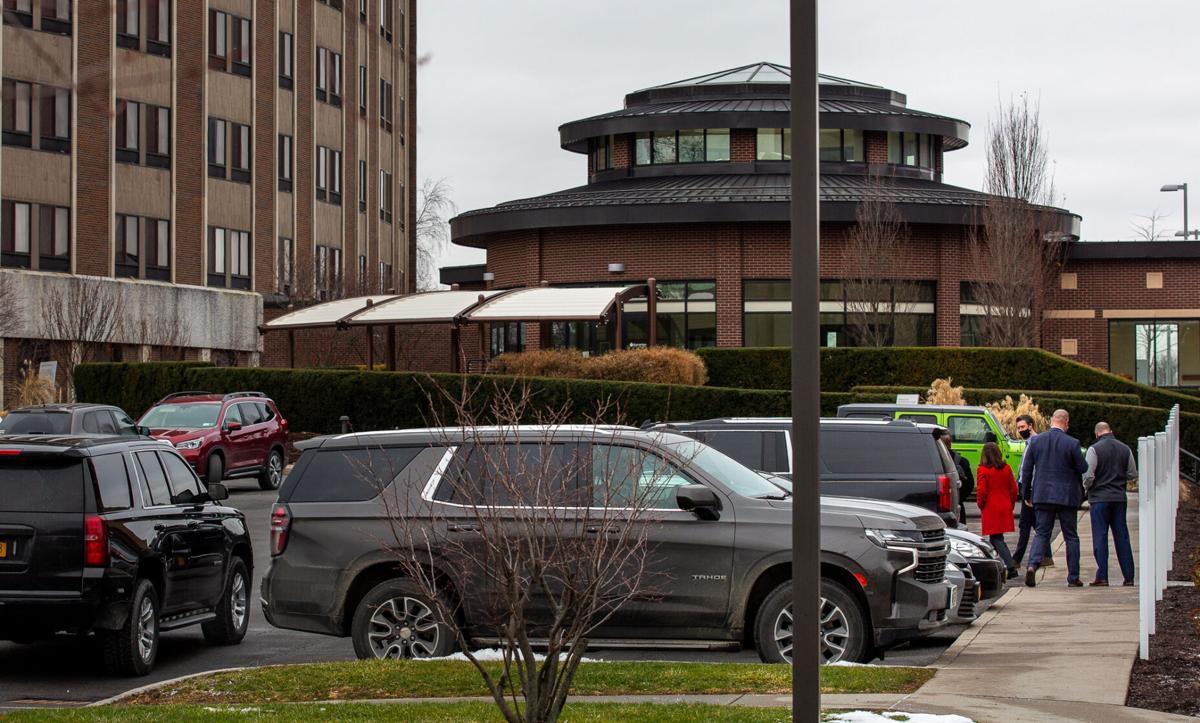 Gov. Kathleen C. Hochul leaves Samaritan Medical Center through a side door after visiting health care workers in Watertown as part of a multi-stop tour in the north country on Wednesday. Kara Dry/Watertown Daily Times 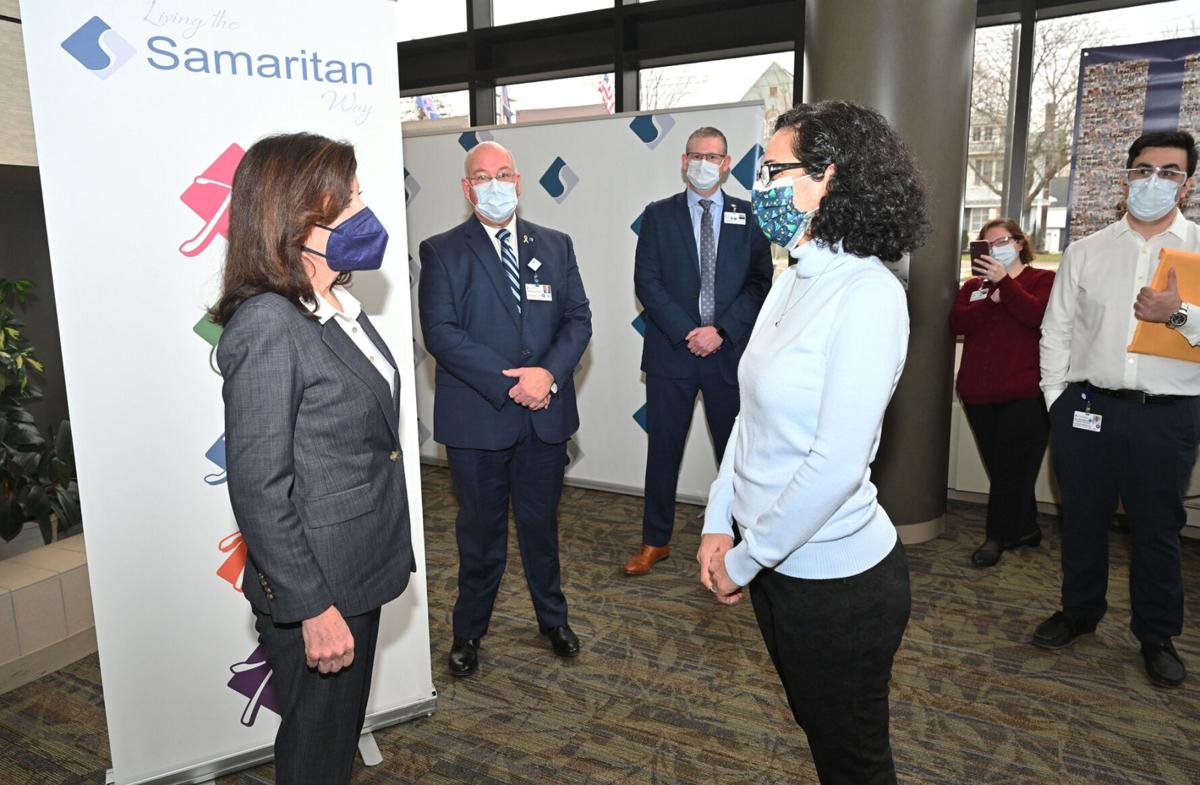 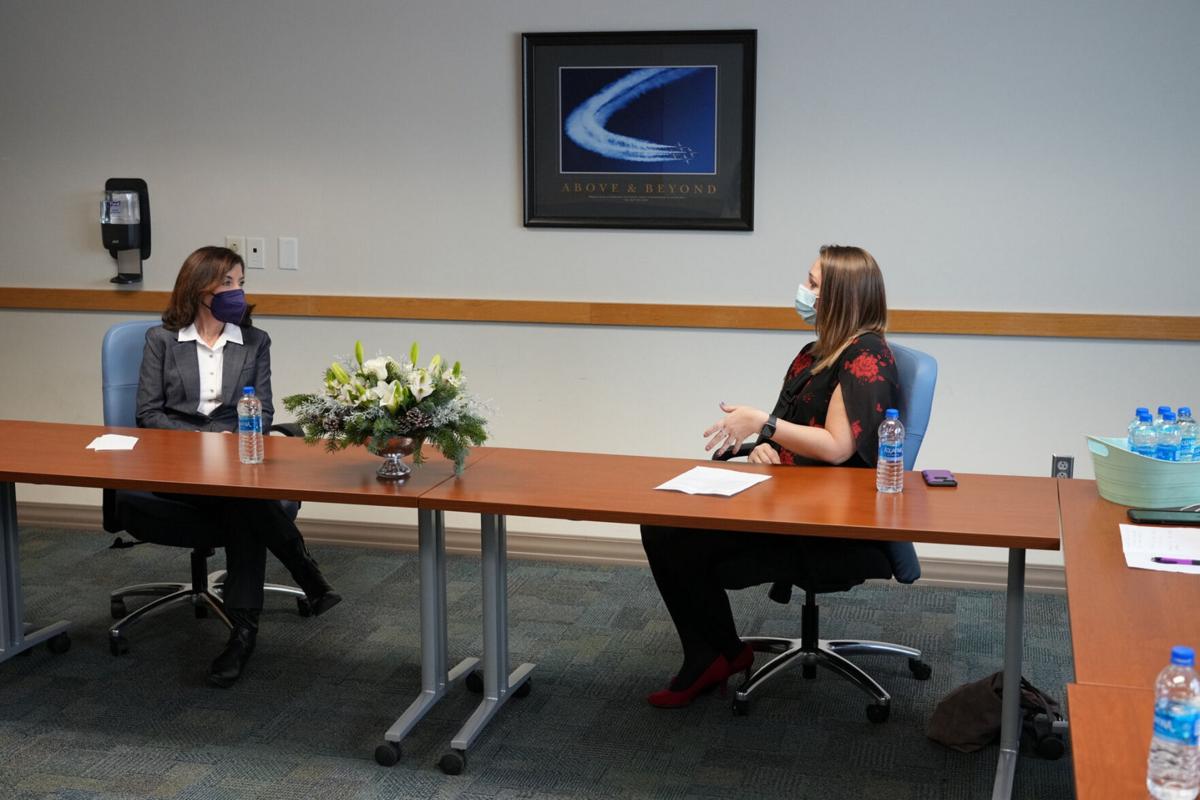 Gov. Kathleen C. Hochul leaves Samaritan Medical Center through a side door after visiting health care workers in Watertown as part of a multi-stop tour in the north country on Wednesday. Kara Dry/Watertown Daily Times

WATERTOWN — After a visit from Gov. Kathleen C. Hochul on Wednesday, it was announced that Samaritan Medical Center won’t be receiving the National Guard assistance it requested last week.

However, officials from the governor’s office say they’re working on a different solution with the state Department of Health to help the hospital with staffing shortages.

“While all currently available National Guard medics have been deployed across the state, (the Department of Health) is actuvely working with Samaritan Health to explore all possible solutions to alleviate capacity issues, including information on potential staffing and other resources,” a spokesperson for Gov. Hochul’s office said Wednesday.

The state had 60 National Guard teams, usually comprised of two people each, the governor’s office said.

According to a recent article on the National Guard website, the New York National Guard has deployed 120 Army medics and Air Force medical technicians to nursing facilities in Syracuse, Rochester, Albany, Buffalo, Utica, Plattsburgh, Uniondale, Liberty, Vestal, Olean, Lyons and Goshen. National Guard officials have only been calling on medically certified members who are not currently working in another medical setting in their personal lives.

Gov. Hochul paid a visit to hospitals and communities across the north country on Wednesday, making stops at Samaritan Medical Center in Jefferson County and Canton-Potsdam Hospital in St. Lawrence County.

Outgoing Jefferson County Board of Legislators Chairman Scott A. Gray, who was present during Gov. Hochul’s visit Wednesday morning, said the governor acknowledged the request for aid at Wednesday’s event.

At both events, Gov. Hochul met with frontline health care workers, thanking them for their service and offering assurances that help is on its way.

The events were closed to the press for taking photos or asking Gov. Hochul questions. Representatives with her office cited a lack of time and a tight travel schedule.

Wednesday’s briefing in Plattsburgh was livestreamed and the governor took questions from reporters via videoconference on Monday, representatives with Hochul’s office said.

“Gov. Hochul is grateful for the sacrifices made by New York’s health care workers and has made it a priority to thank them personally during the holiday season,” a spokesperson with Hochul’s office said in a statement Wednesday. “In addition to thanking health care workers today across the region, the governor provided a COVID-19 update in Plattsburgh and held a media availability with north country press outlets.”

The governor said she decided to visit the north country’s hospitals to get a sense of what the state’s most rural health care facilities are facing in this new phase of the COVID-19 pandemic.

“I really needed to leave the Capitol where I’ve been very focused on our COVID response and reporting to the public and working with our health team and operations team,” she said at a news conference in Plattsburgh Wednesday afternoon. “But sometimes you wake up and say, ‘I need to see the people on the front lines.’”

Visiting Jefferson, St. Lawrence, Clinton and Montgomery counties, Gov. Hochul’s visits were focused primarily on meeting local health care workers, to get an understanding of the pandemic in the north country and to provide reassurance that the state government will continue to offer assistance to medical facilities.

“There were some brief conversations about how difficult it’s been over the last almost two years now,” said Leslie M. DiStefano, spokeswoman for Samaritan Medical Center. “I think the governor really was offering a vote of confidence that resources are coming — whether it’s testing, continued vaccine messaging — so hopefully these caregivers will see some reprieve.”

At the news conference in Plattsburgh, Gov. Hochul provided more details on the state’s response to COVID-19 and the north country’s current status. Recently, the state distributed tens of thousands of KN-95 face masks to all 62 of New York’s counties. Jefferson County received 51,500, and St. Lawrence County received 48,000. Both counties are working on distribution plans involving town and city governments, with more information to be released soon.

The governor stressed the importance of mask wearing as a way to prevent business shutdowns, and encouraged every north country resident to pick up the masks when they are made available.

“We’re also now talking about how important these enhanced masks are, the KN-95’s,” Gov. Hochul said. “We delivered over 185,000 of these masks to the north country alone this week, encouraged people to wear them.”

According to the governor, the north country region has a COVID-19 positivity rate of 47.46 infections per 100,000 people, the lowest in the state, although she cautioned that the number may not be easy to compare to past data because of the holidays. The region’s seven-day positivity rate was 7.19% on Tuesday, also the lowest statewide.

The region’s hospitals have 27% of their total bed capacity available, according to Gov. Hochul, well above the 10% threshold that forces hospitals to pause elective surgeries.

“That’s good,” she said. “You could go a little higher, but you’re not in the danger zone.”

I wonder if Hochul is ‘thankful’ that her mandates created the healthcare worker shortage? Not a federal issue, now not a state issue either. Both appear to be inept!