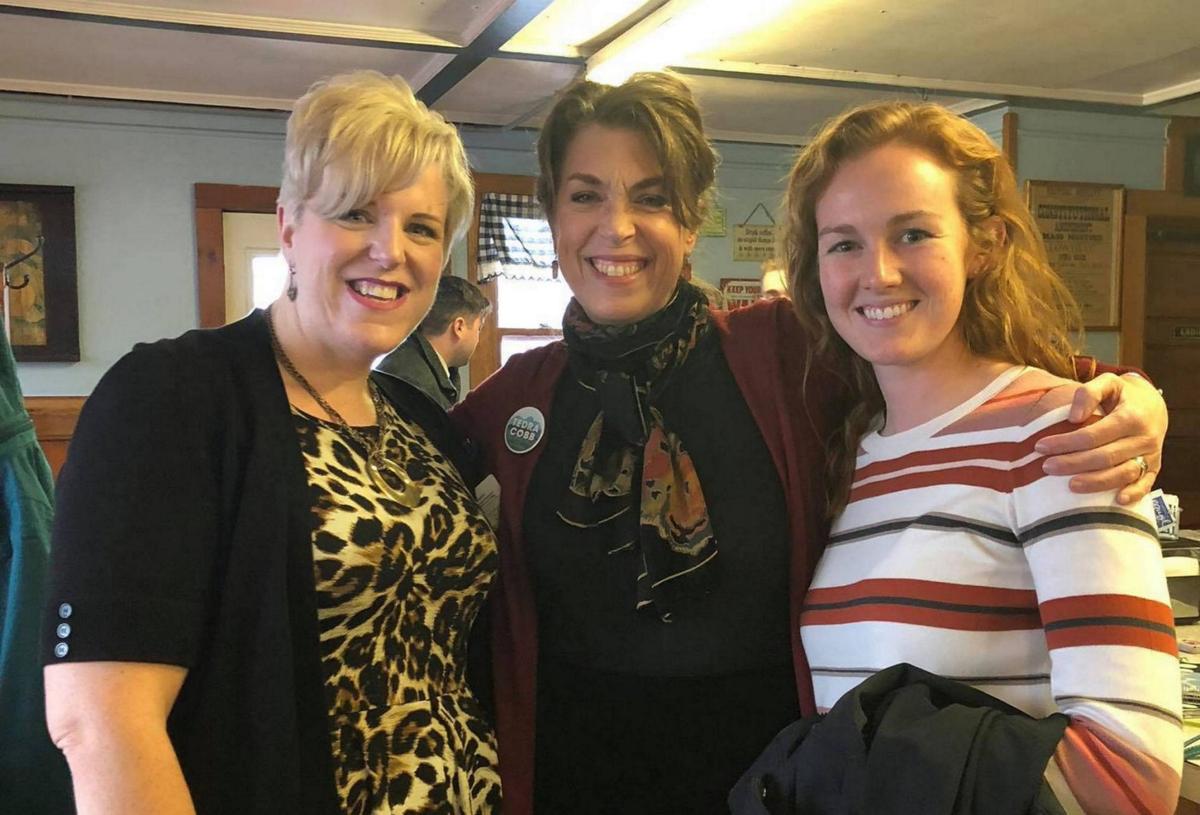 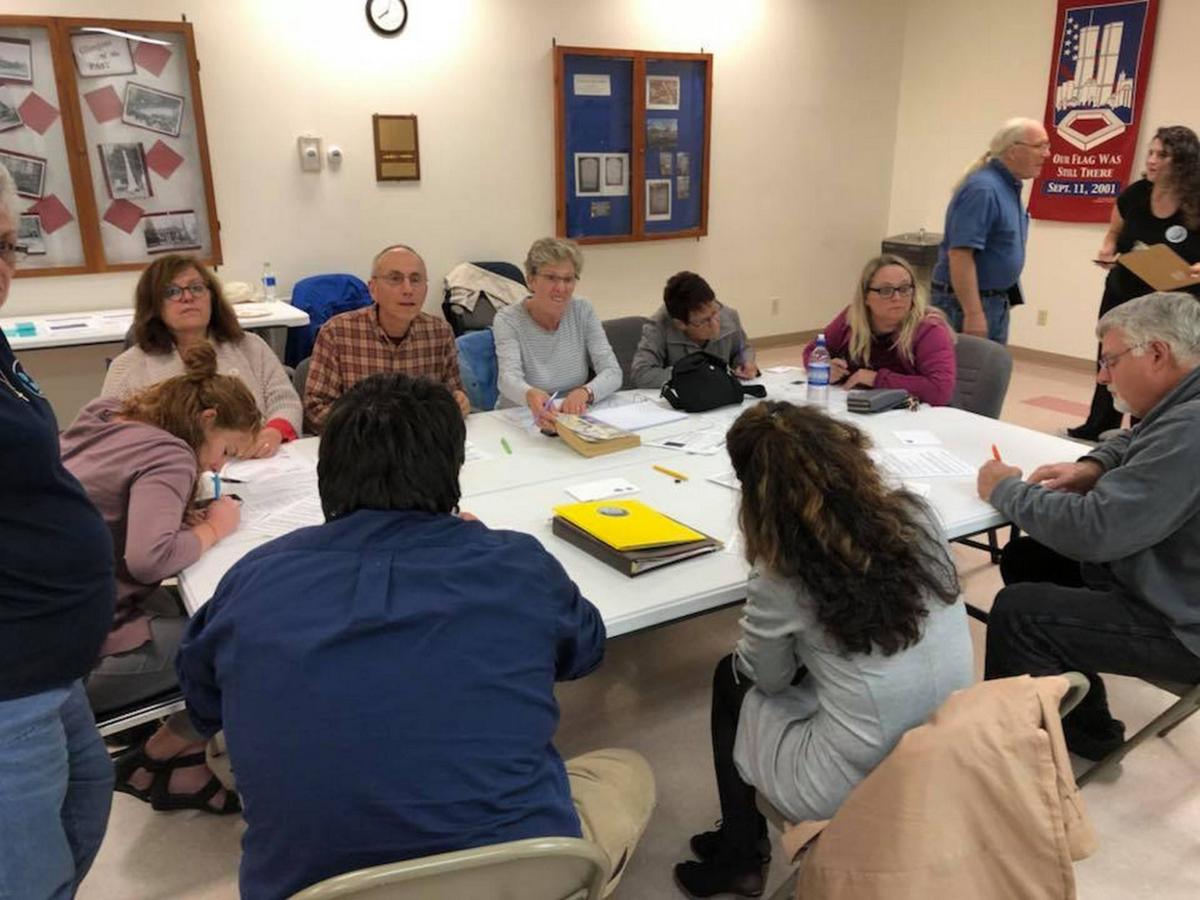 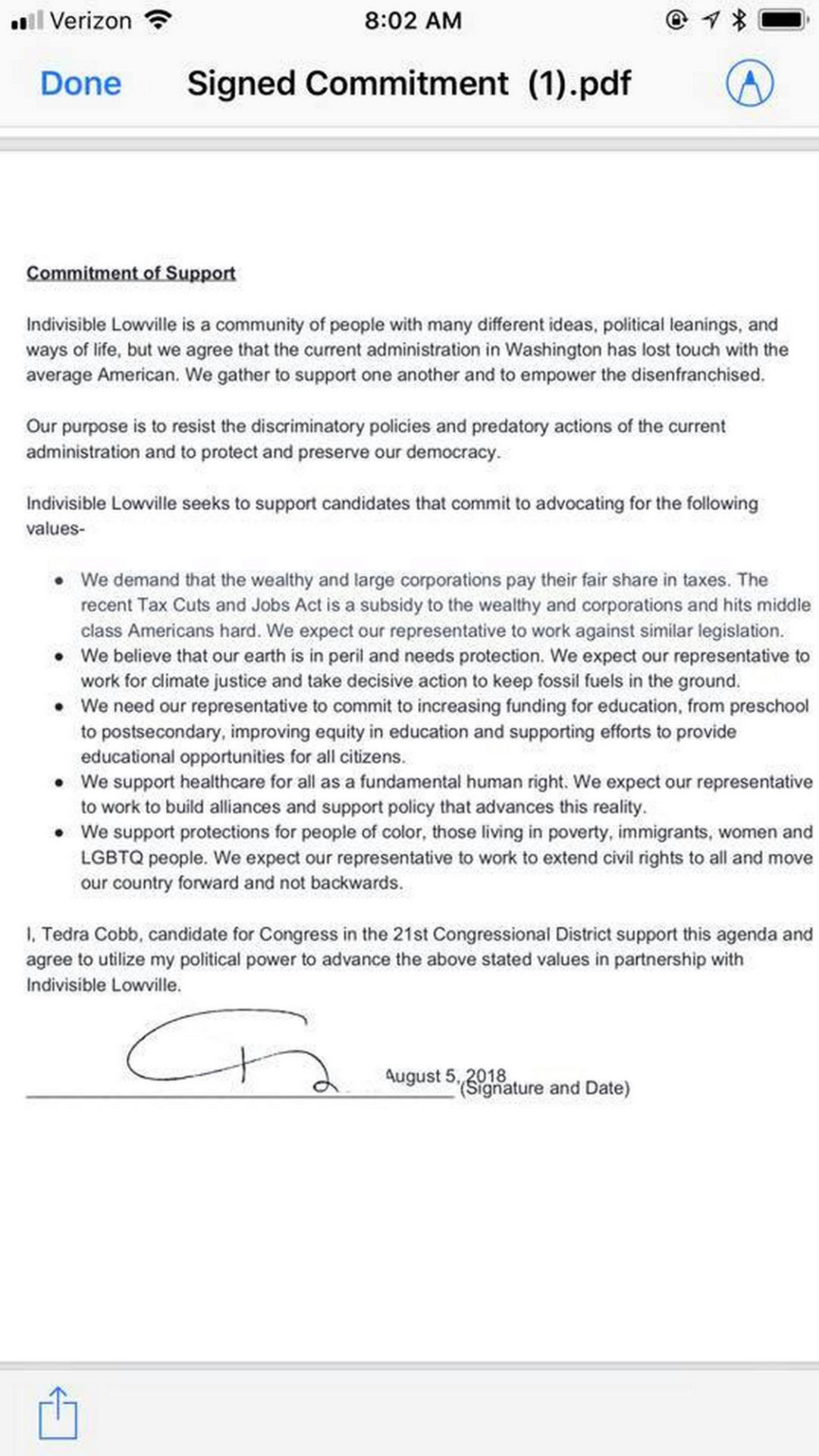 Before endorsing Tedra Cobb as the Democratic Party’s District 21 Congressional candidate in 2018, Indivisible Lowville asked her to sign a declaration of commitment to the ideals she shares with the organization’s members. Photo provided

Before endorsing Tedra Cobb as the Democratic Party’s District 21 Congressional candidate in 2018, Indivisible Lowville asked her to sign a declaration of commitment to the ideals she shares with the organization’s members. Photo provided

In a news release announcing its Saturday meeting, the group said they “look forward to ushering civility and unity back into government” through this year’s elections.

This meeting, originally scheduled for November, was postponed because of weather challenges and is intended as a kick-off for the group’s grassroots election mobilization effort.

“We’re getting our group fired up and ready and re-focused on what we should be doing,” said the group’s co-organizer Emily Lyndaker.

While there are over 220 people on the group’s mailing list, there are between 30 and 50 active members, Mrs. Lyndaker said, and for now, instead of focusing on specific issues the group is dedicated to promoting Democratic candidates in November including Ms. Cobb and those in the race for president.

“In off-election years, we can go back to the issues, but this year we have to get back to Indivisible’s original mission. In this meeting, we’re going to remind everyone what the goal is,” she said.

Members are encouraged to invite people who “know there is a better, more inclusive and compassionate way for our country” in notices of this meeting and told that both speakers are extremely “energized.”

Ms. Cobb is expected to engage the group for about 45 minutes, “to let us know what she needs from us,” Mrs. Lyndaker said.

The group endorsed and campaigned for Ms. Cobb in her 2018 run to oust incumbent Congresswoman Elise Stefanik only after verifying she shares the group’s intentions and ideals.

For this race, the group is again ready to help Ms. Cobb get the signatures she needs to be on the ballot as soon as the petitioning process begins on Feb. 25, said Mrs. Lyndaker.

To help ramp up participation, Indivisible Lowville organizers changed the group’s meeting day from Tuesday to Saturday, in addition to changing from a set monthly meeting to a need-based structure.

Ms. Reeske’s role in this meeting is to help give group members the skills they need to mobilize and meet their goals.

“Indivisible Lowville is critically important in Lewis County and to New York 21 because there are so many people who increasingly see through the shenanigans of Trump Republicans and who feel they are blue dots in a red sea,” Ms. Reeske said. “Indivisible is for people who want to get off the couch and take action.”

Nationally, the Indivisible movement began in 2016 after the election of President Donald Trump, focusing on educating and supporting local grassroots groups to both resist the “Trump agenda” and to mobilize to help progressive candidates get elected. The group’s structure is based on the Tea Party model.

Vote out the tRump lackey. Vote for Tedra Cobb.

Have you considered a trip to Alexandra Bay now that the village board suspended the open container law?