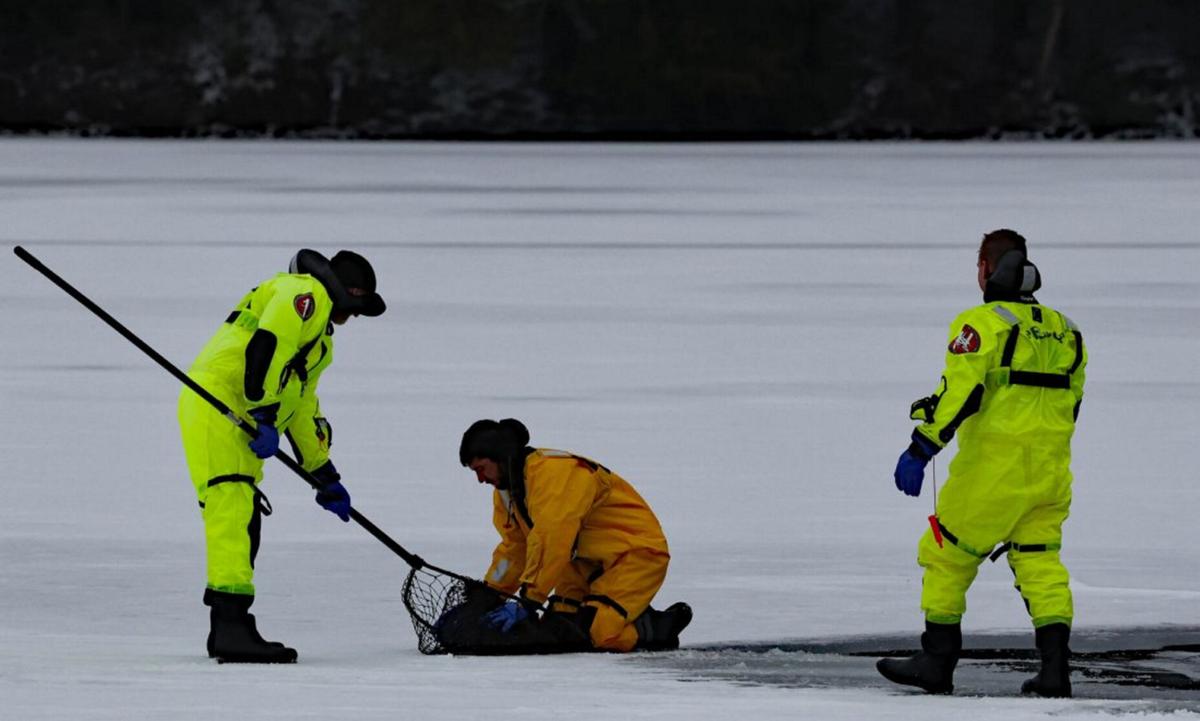 From left, Star Lake Fire and Rescue Chief Rick Rusaw, Adirondack Center for Loon Conservation Wildlife Technician Cody Sears and SLFR member Ben Wood helps an iced-in loon get out of Star Lake on Dec. 28. The loon was successfully released onto Lake Champlain where she can continue her migration to her winter home. Photo courtesy of Nina Schoch 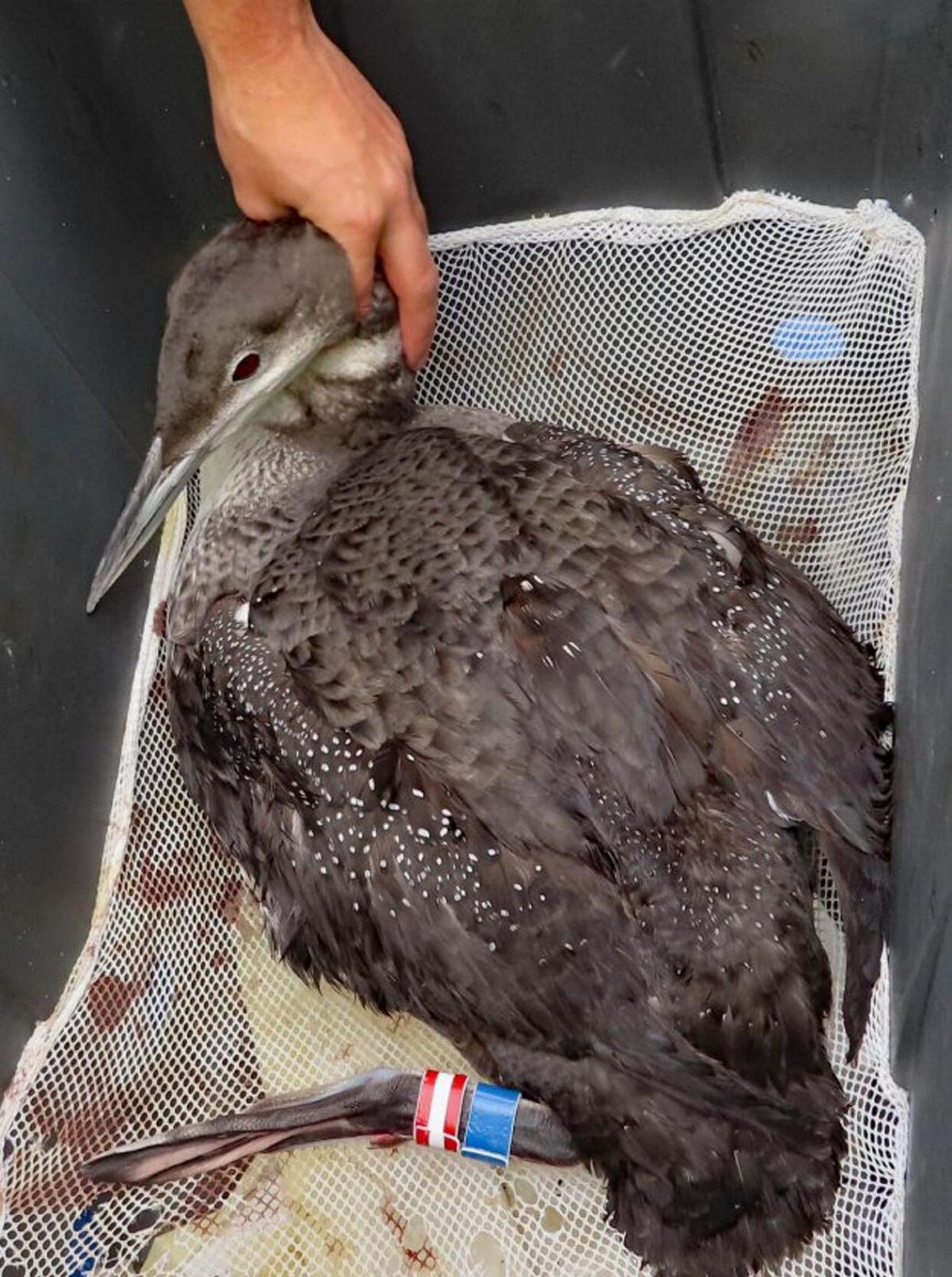 This adult female loon was iced in on Star Lake on Dec. 28 when Star Lake Fire and Rescue members and Adirondack Center for Loon Conservation staff rescued her and found her in good health. Photo courtesy of Nina Schoch 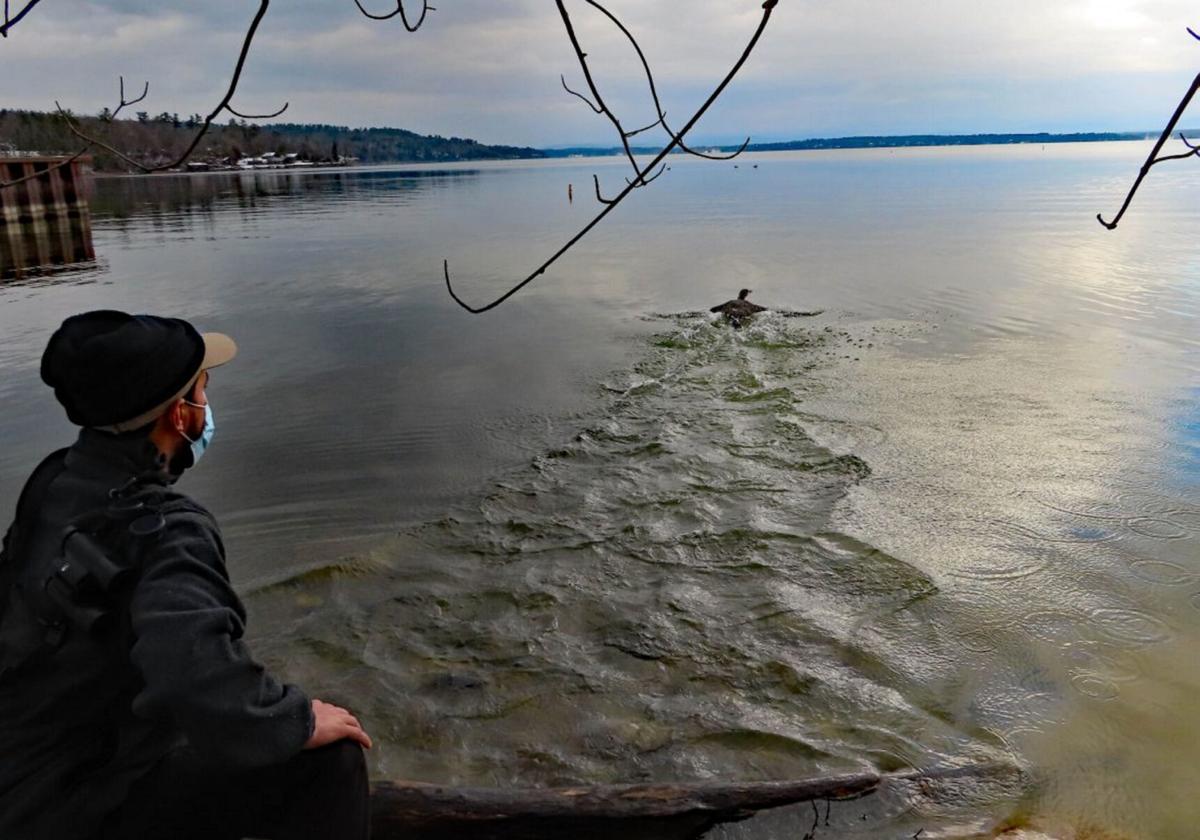 Adirondack Center for Loon Conservation Wildlife Technician Cody Sears watches a loon flap her way across Lake Champlain on Dec. 28. Earlier that day, ACLC staff and Star Lake Fire and Rescue members freed her from Star Lake, where she was trapped, iced-in for several days. Photo courtesy of Nina Schoch

STAR LAKE — Firefighters and loon experts rescued an iced-in adult female loon stranded on the icy waters of Star Lake recently, and set her free to continue her migration on Lake Champlain.

After the Star Lake Fire and Rescue Department unsuccessfully tried to cut a runway in the ice for a few days, the Adirondack Center for Loon Conservation got involved and led the rescue on Dec. 28. ACLC Executive Director Nina Schoch said she was glad for the brave work of the department members.

“They were awesome to work with,” she said.

“Ice rescues are something that we’re very cautious about,” Schoch said. “If someone goes in the water, then it’s rescuing two, and one’s a person. … We don’t want to risk anybody’s life for trying to catch a bird. … It wasn’t until recently that the ice was thick enough that we could go out.”

“We’d see and hear them throughout the summer, then one day it seems like they are gone. So when the first call came in we were a little surprised,” Rusaw wrote in an email. “I was easily able to get a small crew together willing to try and help her out. We are just glad that we were able to give her a chance.”

Lake residents first noticed the loon diving in and out of a small hole of open water on Christmas morning. The pocket of open water had gotten smaller and smaller, stranding her in the lake.

Schoch said these types of ice-ins happen several times a year, usually when the ice coverage is fluctuating on the water. Sometimes it can catch loons by surprise, she said, but she didn’t know why this loon didn’t fly out sooner. She estimates that it was 2 or 3 years old and was growing into its flight plumage. It may have been still learning to fly with its new feathers.

Loons can dive back under quickly if they get spooked, so the rescuers had to move fast. Wearing ice rescue suits and carrying a net, they snatched up the startled bird.

“They were very concerned for her,” Denny said. “But they took her weight, they gave her some fluids and they confirmed that she is a healthy bird fit for release.”

It’s best when they can release loons right away, Denny said. It’s stressful for the birds to be in captivity, and there are no local medical facilities to treat loons properly. They also put a leg band on the loon.

The loon was released on Lake Champlain, which won’t ice over for a while longer, and Denny said this will give her some time to rethink her migration.

“The bird seemed to be quite happy to be back on the water,” Schoch said.

Denny said loons cannot take flight from land because they have dense bones. Birds commonly have hollow bones to help them fly, but loon bones are dense to help them dive. Their bodies are built differently, too. With legs far back spreading their weight out disproportionately, they’re built perfectly for water, but not for land.

“They can’t just jump into the air,” Denny said. “They need a runway.”

The runway should be about 400 meters of open water, according to Schoch, or around a quarter-mile.

Denny said iced-in loons are “easy prey” for eagles, which will dive and attack the smaller birds while they’re trapped.

They’re the top predators of aquatic ecosystem in the Adirondacks.

Last winter, Schoch said four loons got iced in on Lake George, but by time the ACLC found out, an eagle had eaten one.

Where do loons go in winter?

This may have been a “traveling migrant” loon, Denny said. By now, she believes the Star Lake loons have all migrated. But Schoch said it may be a local bird that just left late.

Schoch said last estimates show there are around 2,000 loons in the Adirondacks.

“On a population level, it means a lot to rescue an individual loon because they live so long,” she said. “If an adult dies, you’ve lost that breeding territory for two years. It takes them several years to establish a breeding territory and start raising chicks.”

Only a quarter of loon chicks make it to adulthood, according to Schoch.

The ACLC is planning another loon census soon. Schoch said their population has made a comeback from the 1980s, since the pesticide DDT was banned.

Eventually, Schoch wants to set up several rescue teams around the park that can be dispatched for loon emergencies and bring injured birds to a rehabilitation center she plans to open in Newcomb.

Schoch said she also plans to get ACLC staff their own ice rescue equipment soon with money the center received last year.

She said she won’t be surprised if there are more cases of iced-in loons this winter. With the temperatures dropping low now, bigger lakes will start freezing fast and the birds might not expect to lose their runways so fast.

“It’s not often that the ice conditions are really good for rescuing a loon, so when we’re able to help one, it always feels very lucky and very fortunate to have been able to step in,” Denny said.