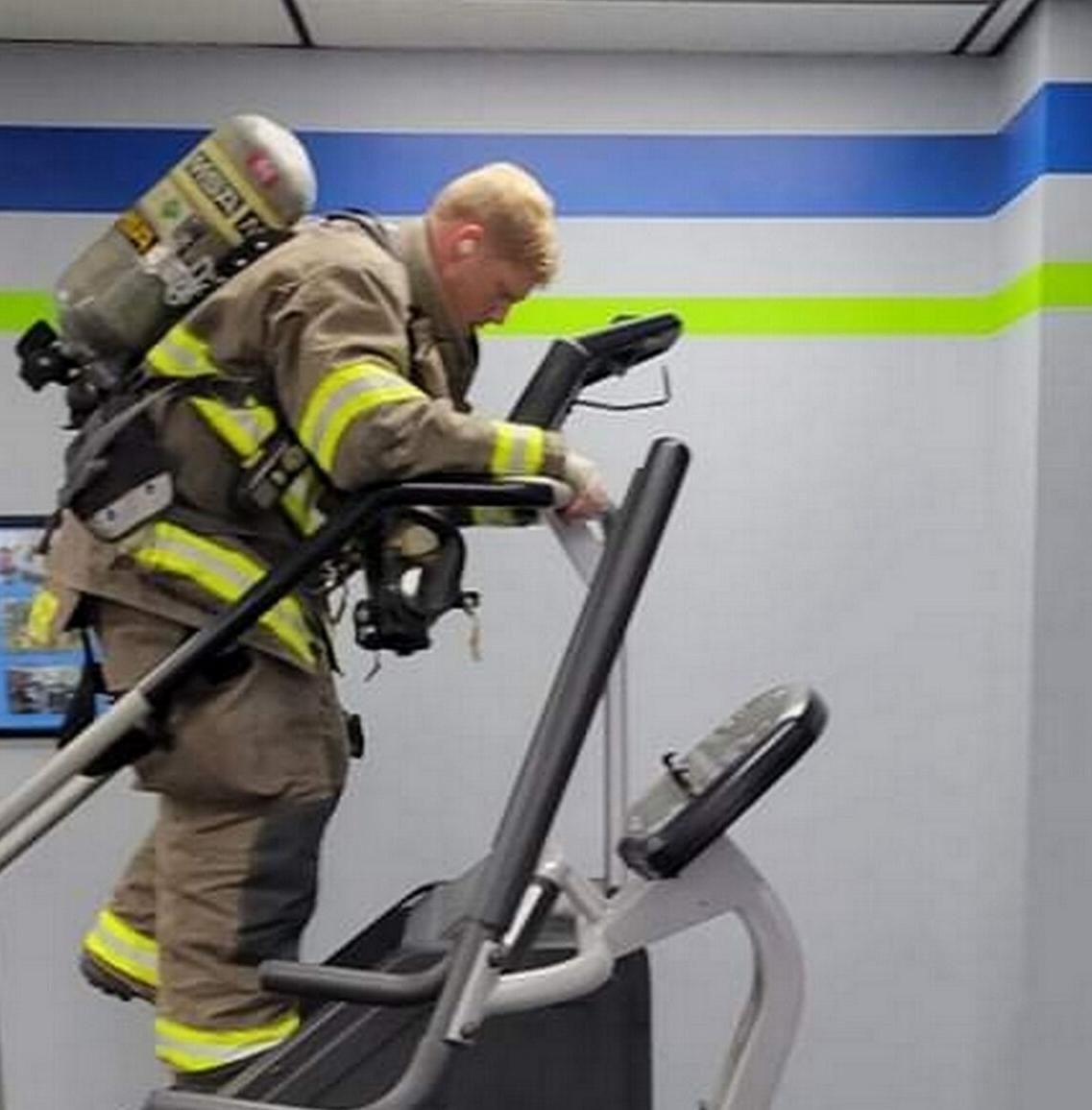 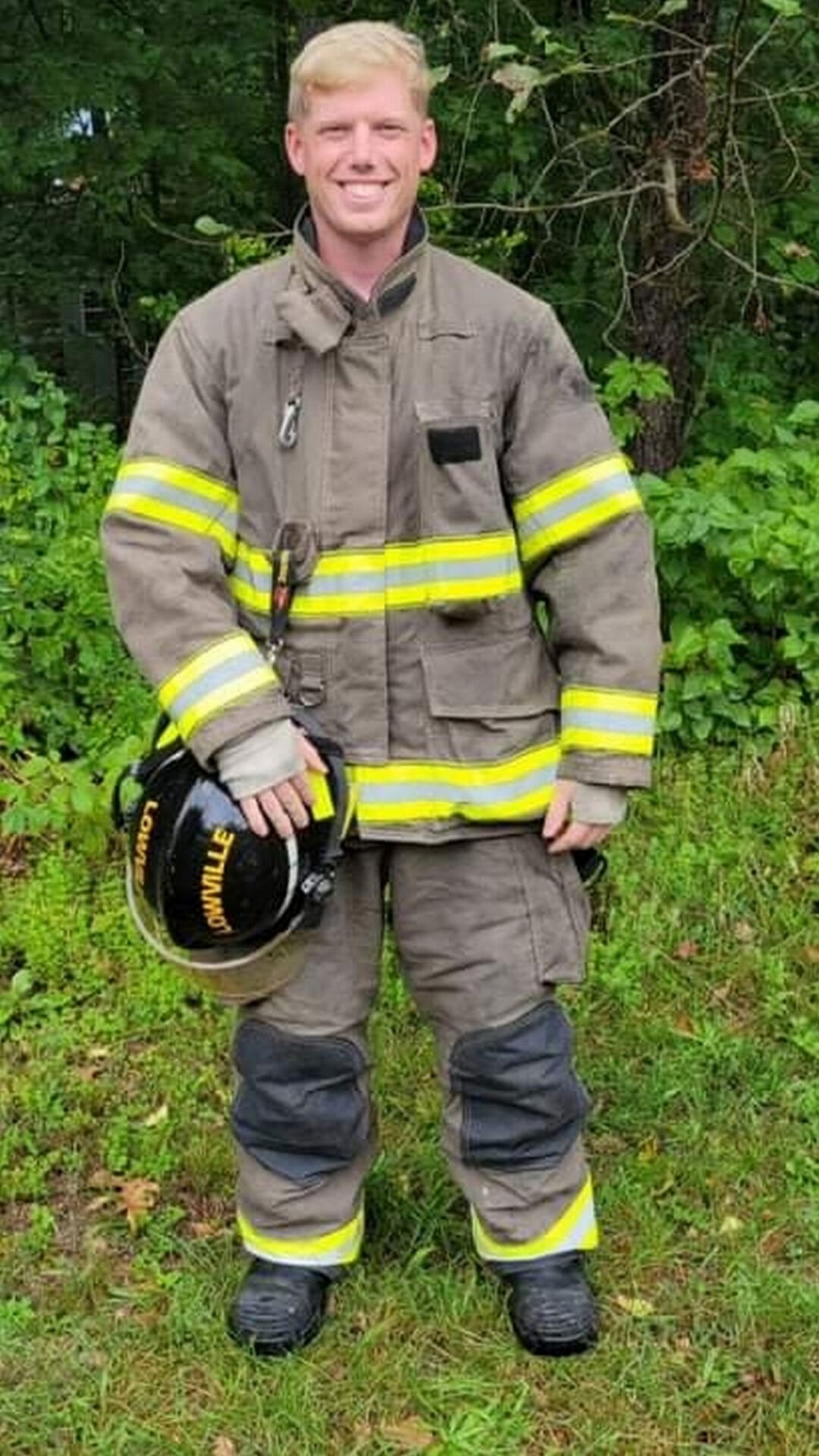 LOWVILLE — A local volunteer at the Lowville Fire Department is taking as many steps as he can to memorialize the lives lost and the first responders who were made ill by the Sept. 11 terrorist attack on the World Trade Center and the 20 years of war that have followed.

Benjamin Lyndaker will wear and carry 132 pounds of equipment up and down 110 flights of stairs on Saturday morning beginning at 9 a.m. in a 9/11 Memorial Stair Climb event, with proceeds to be split between the National Fallen Firefighters Foundation and the local volunteer fire department.

Mr. Lyndaker saw a similar commemorative stair-climb event in Utica for the 10th anniversary of 9/11 and it stuck with him.

“Since then, it’s something I wanted to bring here to Lowville, to Lewis County but... I couldn’t do it until this,” Mr. Lyndaker said. “But everything just seemed to fit together this year. The stars aligned I guess you could say.”

As a former Marine, Mr. Lyndaker said he feels even more compelled to “memorialize what 9/11 represents, the tragedy of that day and the toll that it’s taken on many people since then.”

Without any skyscrapers in Lewis County, Mr. Lyndaker reached out to Lowville Academy and Central School District to use the three flights of stairs in the middle of the high school for his vertical hike.

“We do have training towers that have three flights, but they’re really narrow, so with all of the gear on, the school made more sense,” Mr. Lyndaker said.

He will be dressed in full firefighter turnout gear consisting of the heavy protective coat, pants and boots, an air pack, two spare bottles of air, a high-rise pack consisting of 200 feet of 1 1/2-inch hose and a set of “irons,” which includes an axe and a halligan tool used to pry open doors and destroy walls.

While locally, without many tall buildings, there is not a lot of reasons to have to wear it all at once, Mr. Lyndaker decided to wear the gear because he wanted to challenge himself with “the most extreme situation and condition” he could imagine.

In preparation for the strenuous memorial, Mr. Lyndaker has been in training. To date, he has done 78 flights of stairs in full gear at one time and 267 flights in one effort without gear.

Although Mr. Lyndaker sent out notices to all of the fire departments in the county inviting other firefighters to take part in the memorial, noting gear was not required and every participant can choose what to wear, only one person has signed up to join him in the climb.

He said he has faith, though, that others will show up the day of the event.

Likewise, sponsorships have been slowly coming in from companies around the county pledging a dollar or two for each flight of stairs and some individuals who gave flat donations for the effort rather than the per-flight pledge.

“There’s no expectation of any certain amount,” Mr. Lyndaker said. “No donation is too small. I just want to raise as much as I can to send to the Fallen Firefighters Foundation to help.”

Due to COVID-19, no spectators will be allowed at the event, but Mr. Lyndaker will be posting Facebook Live videos “every 20 flights or so” and when he completes his quest.

He believes he will be able to complete his mission within about one hour and 15 minutes.

“I have no belief that I will fail,” he said.

Prior to the Memorial Stair Walk, the Lowville VFW is sponsoring a procession of remembrance with first responders — lights, no sound — beginning at Tops Plaza at 8:15 a.m. and ending at the VFW Post 6912, 7752 West State St., followed by a short ceremony including a moment of silence at 8:46 a.m. when the first plane struck the World Trade Center, and a speech by Cpt. Robert Tennies, a retired Fort Drum firefighter who worked at Ground Zero in the days following the attack.

Refreshments will be served after the event.

The VFW is also supporting Mr. Lyndaker’s memorial event that follows theirs by sponsoring his stair climb and putting out a donation box at the post for contributions.

People interested in sponsoring Mr. Lyndaker’s 9/11 Memorial Stair Climb can do so on the event’s Facebook page, or by delivering or mailing a check to the Lowville Fire Department at P.O. Box 81, Lowville NY 13367, noting “9/11 event” in the memo, or by calling Mr. Lyndaker directly at 315-486-5196.

Donations will be accepted until Sept. 18.