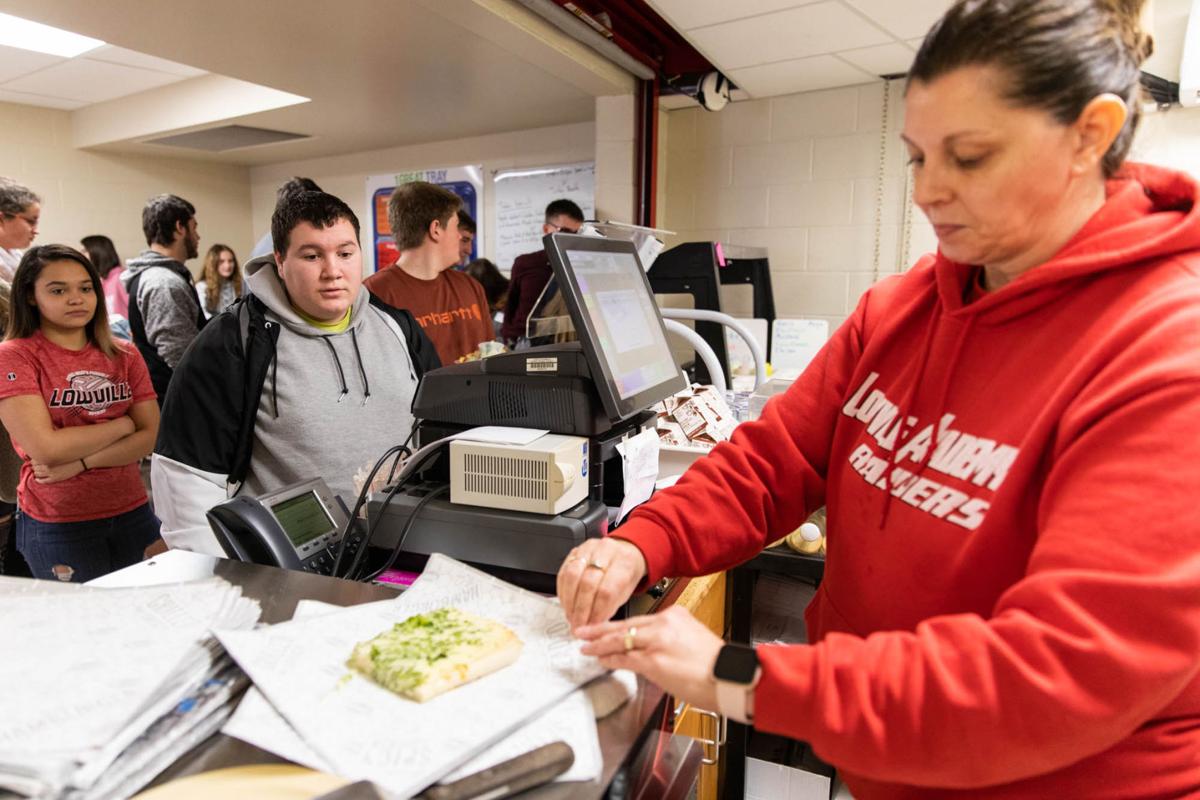 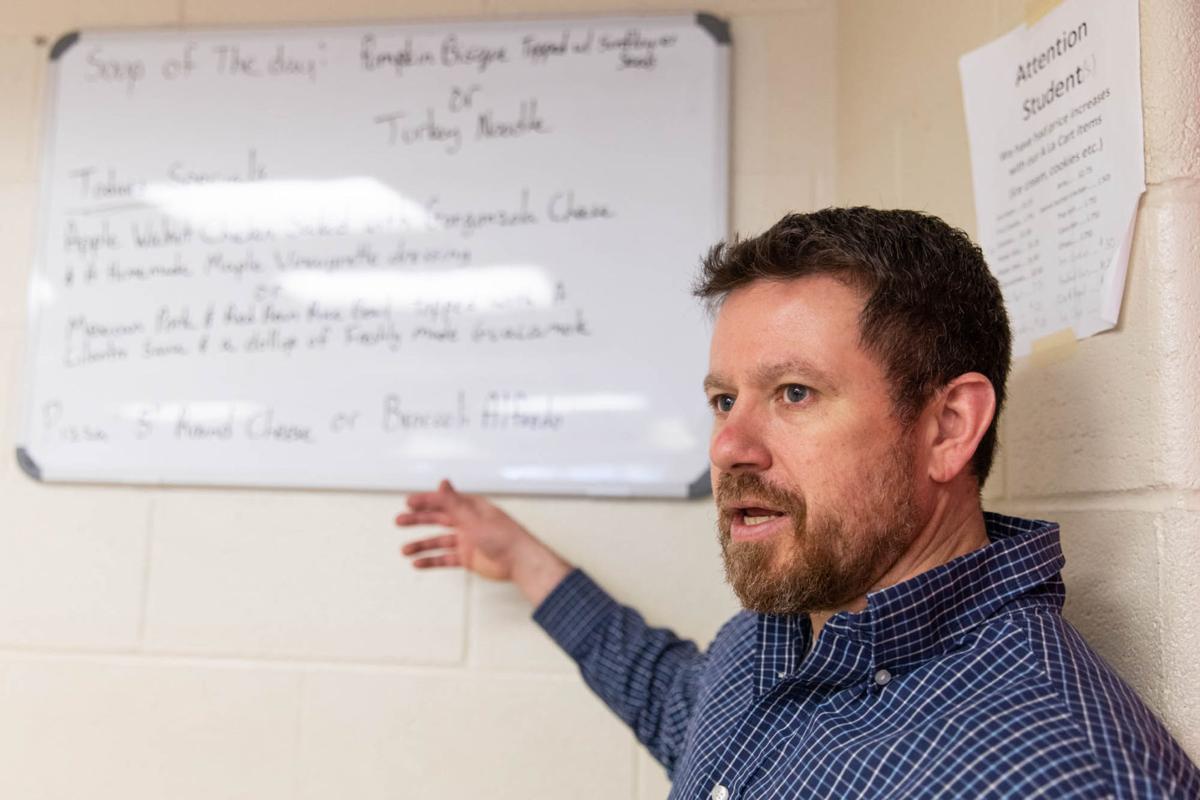 Steven Fuller, food services director at Lowville Academy and Central School, points to the school’s lunch menu Wednesday inside the school’s cafeteria. The menu has a variety of items made with New York state sourced ingredients. Sydney Schaefer/Watertown Daily Times 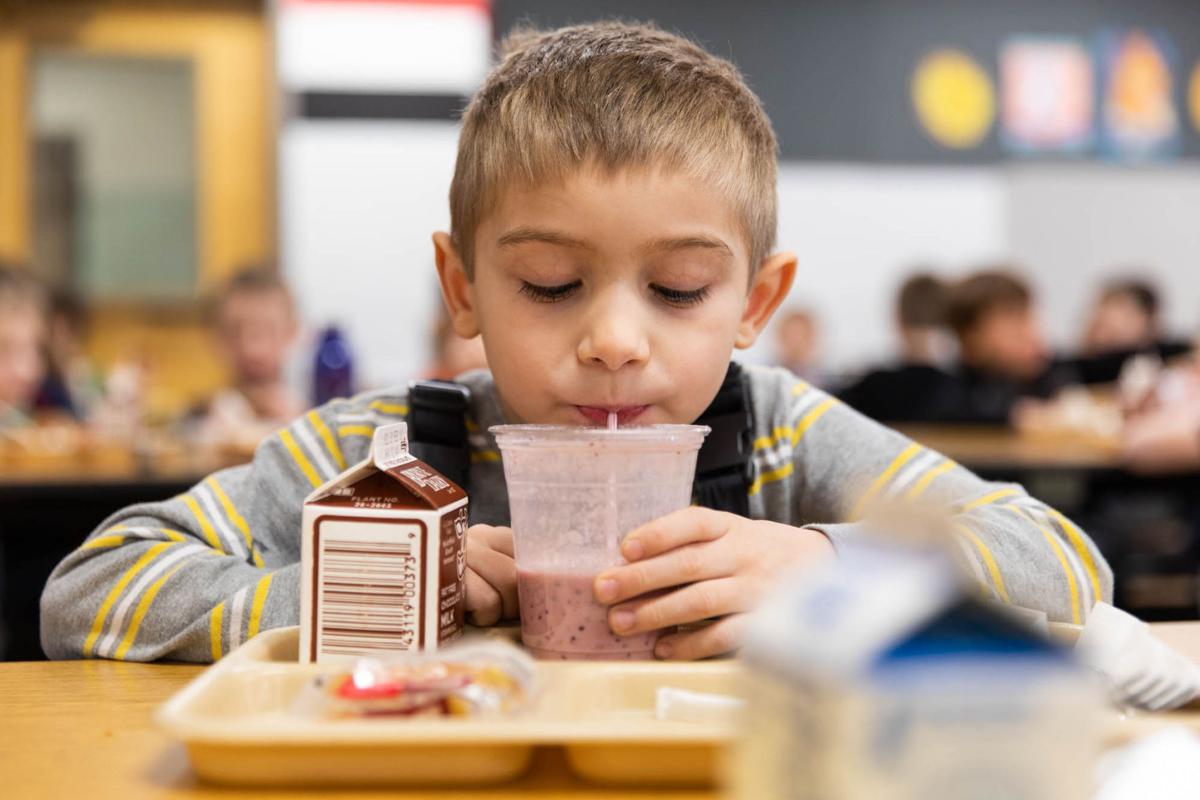 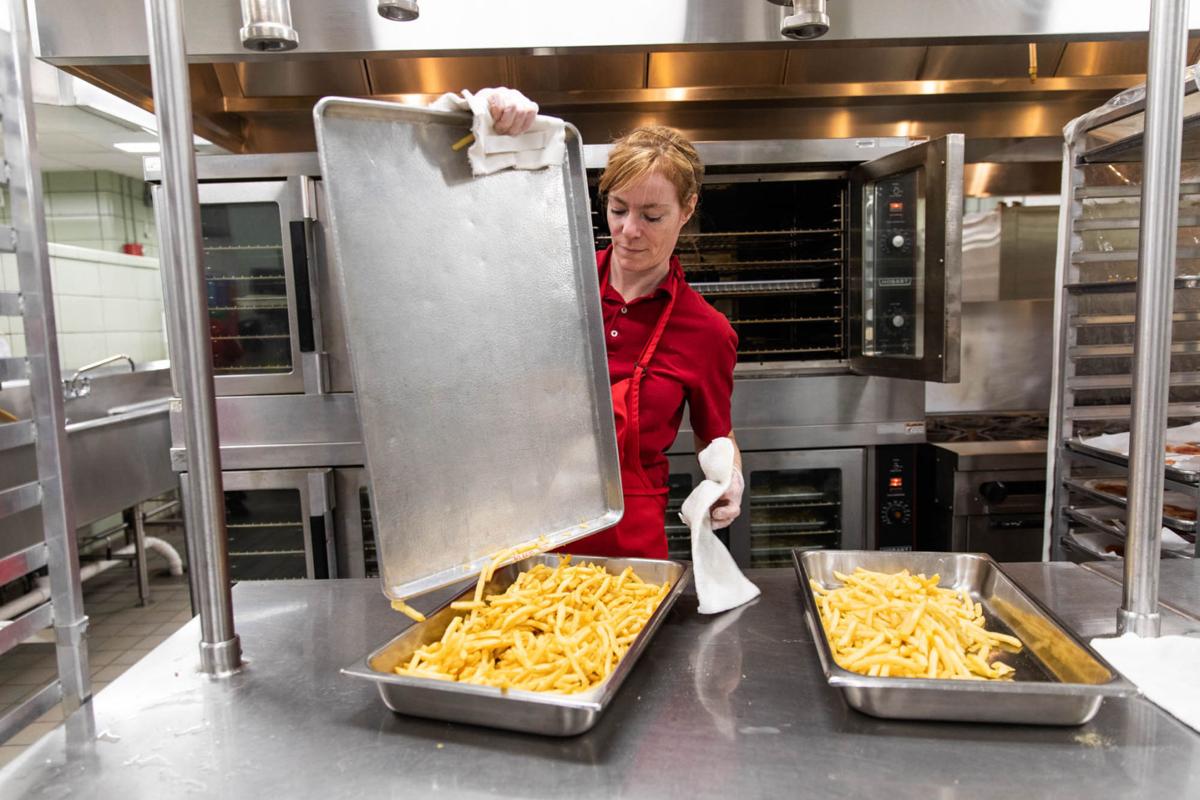 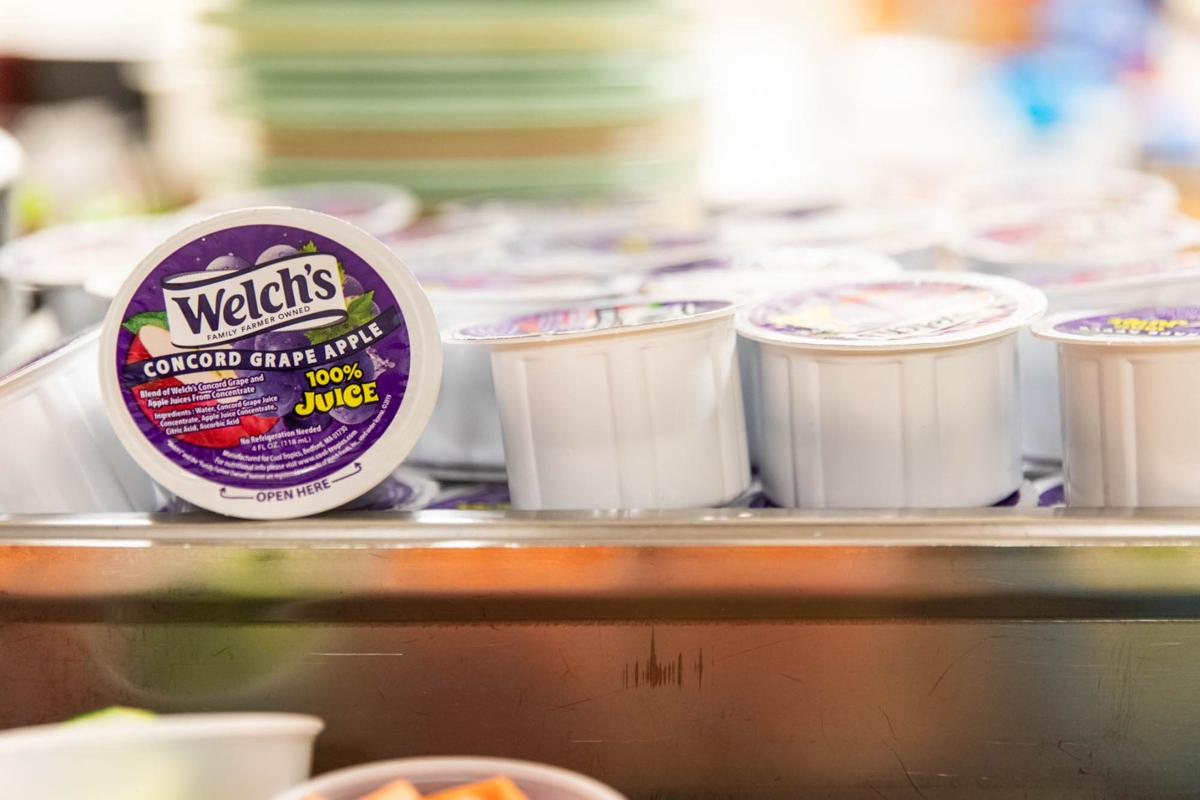 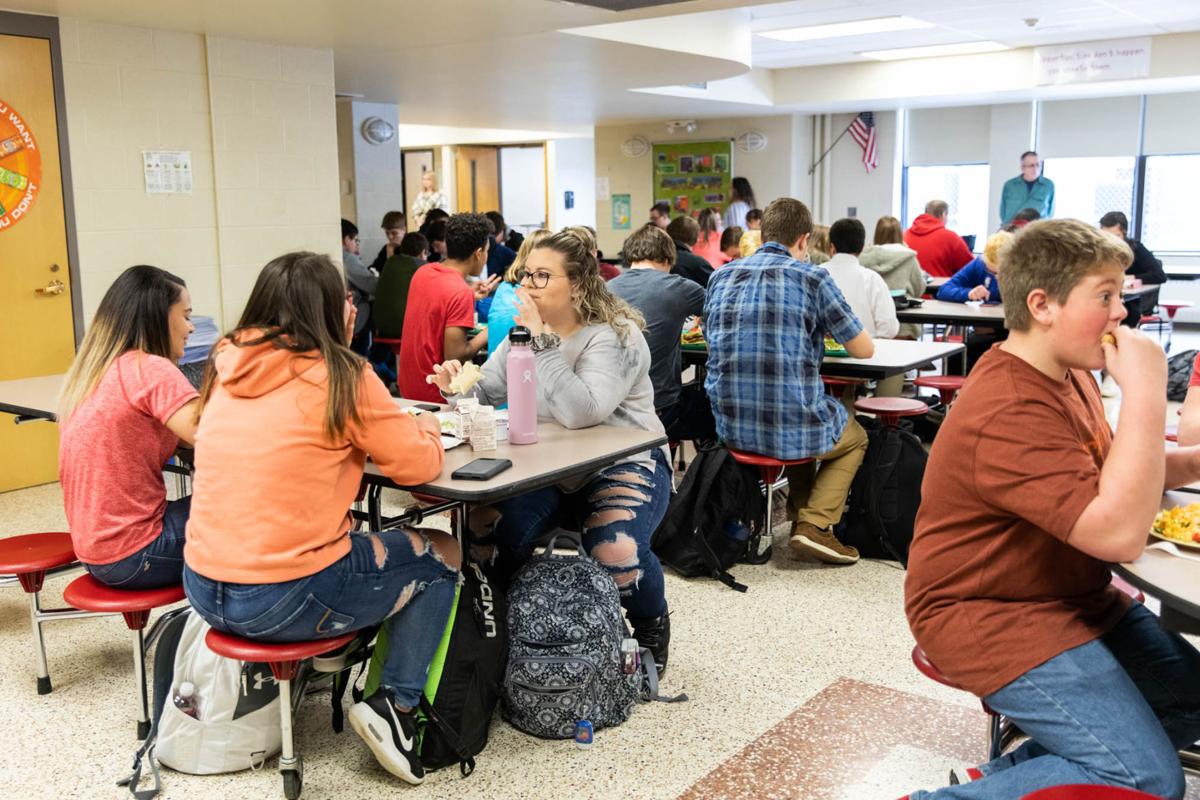 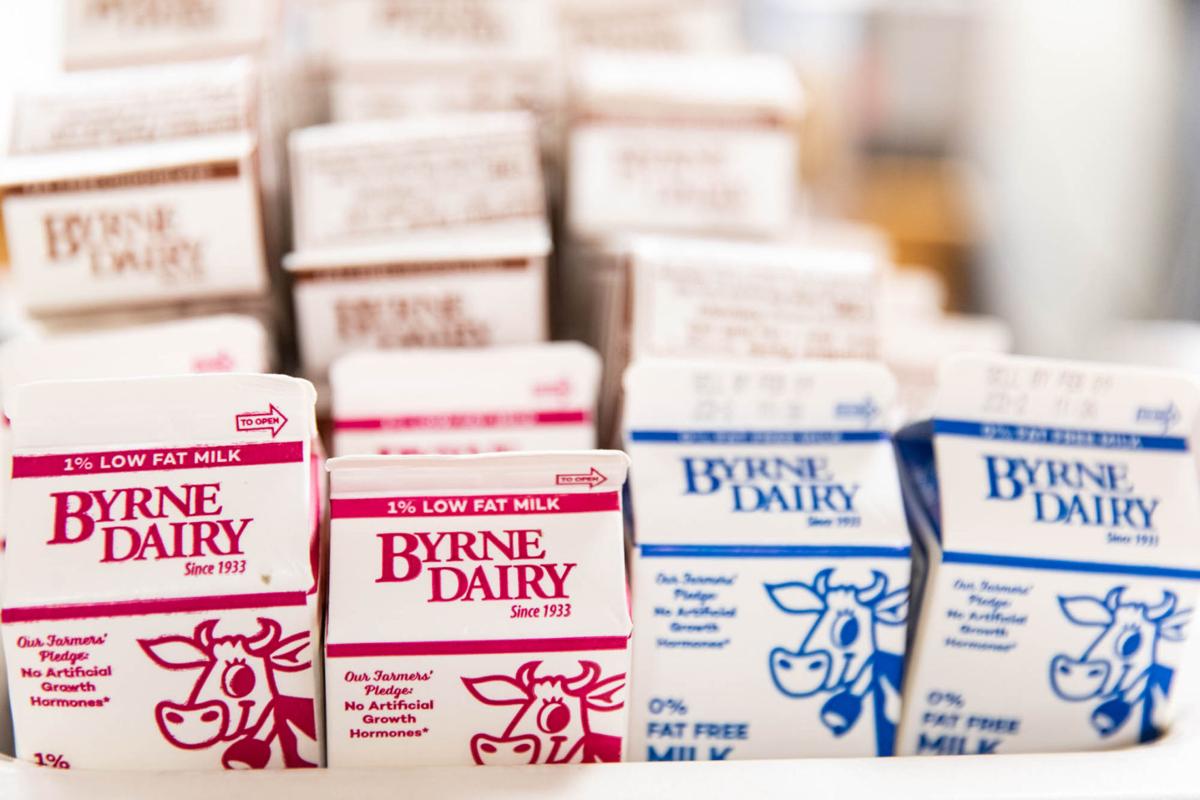 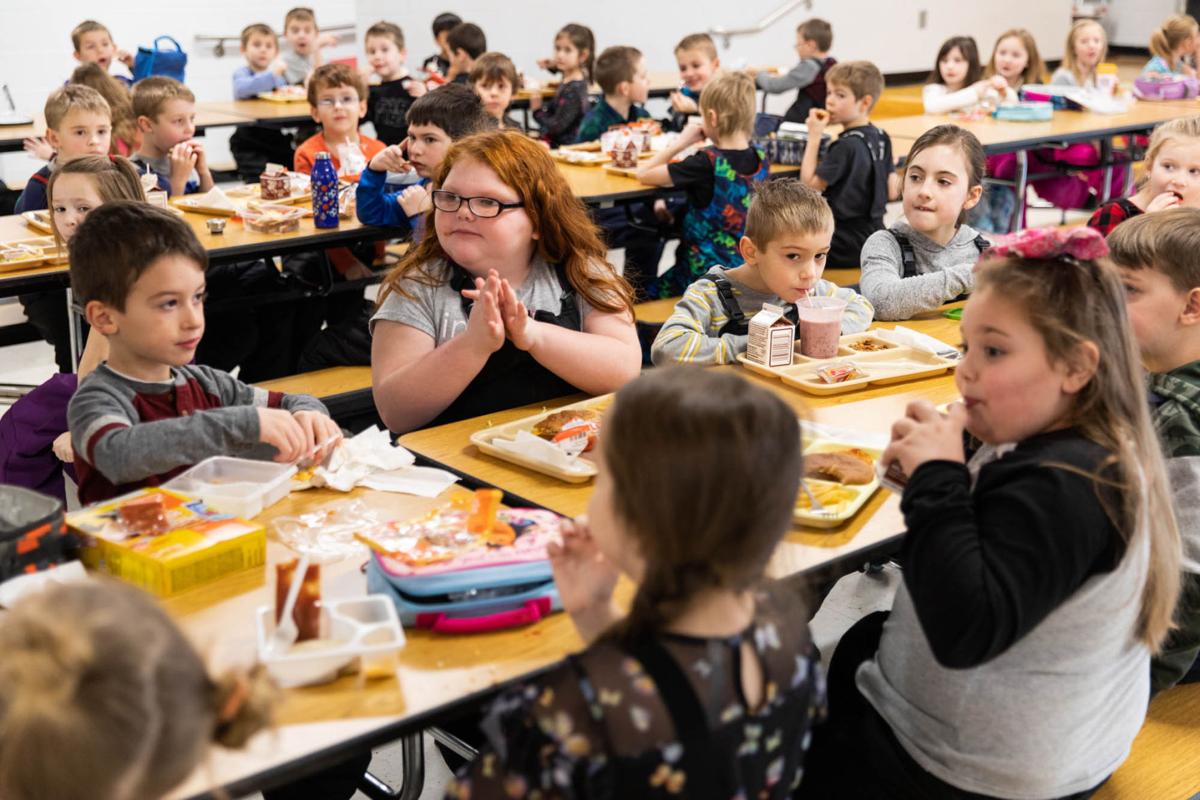 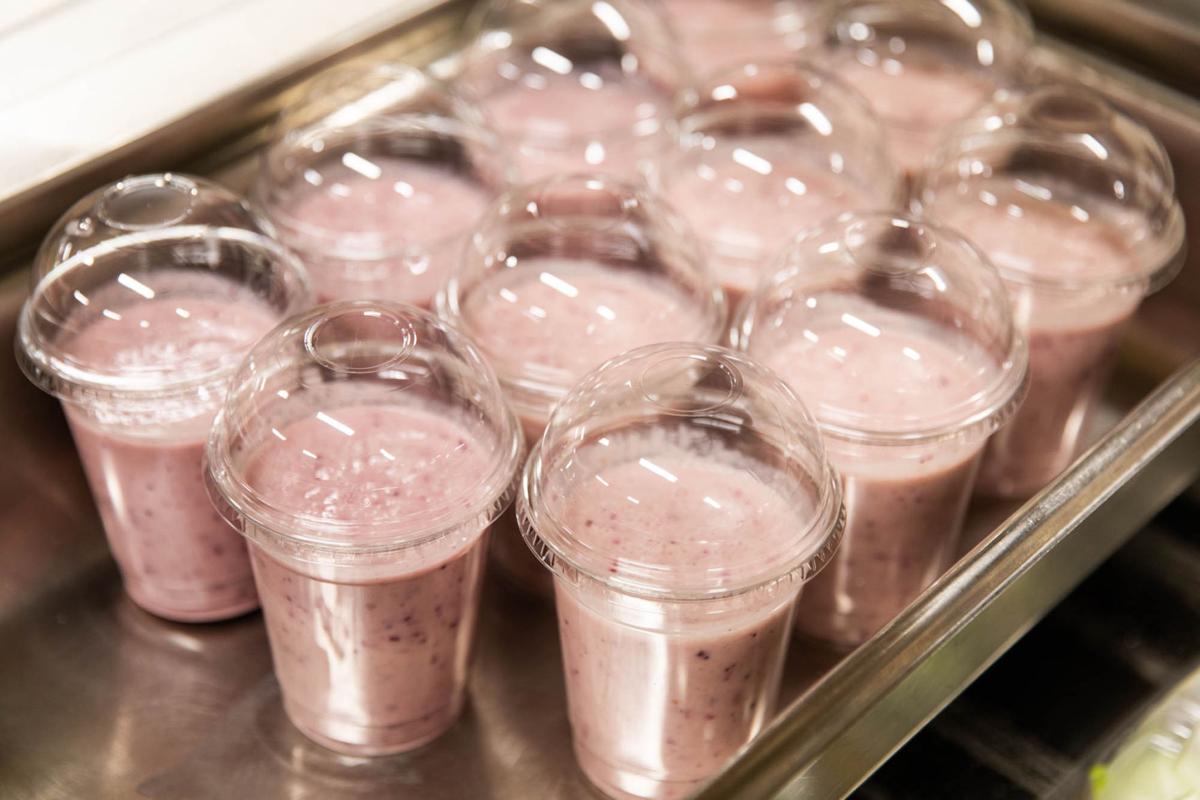 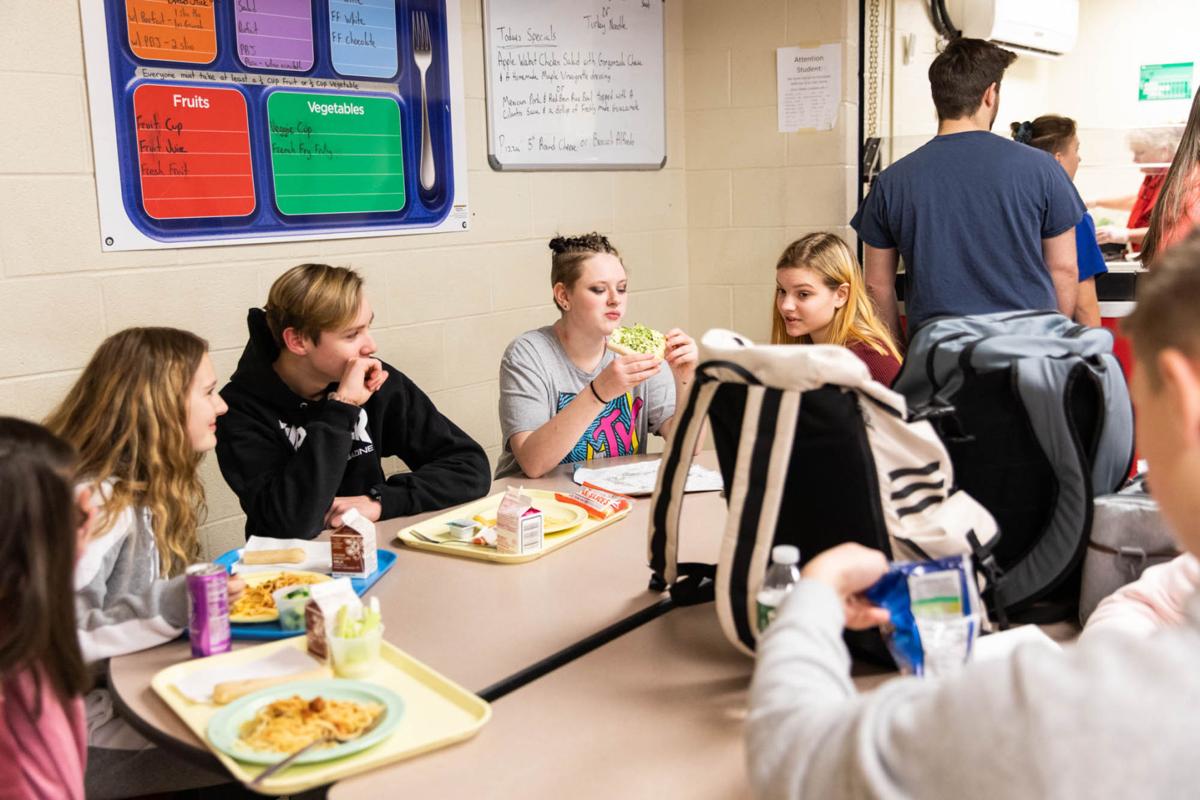 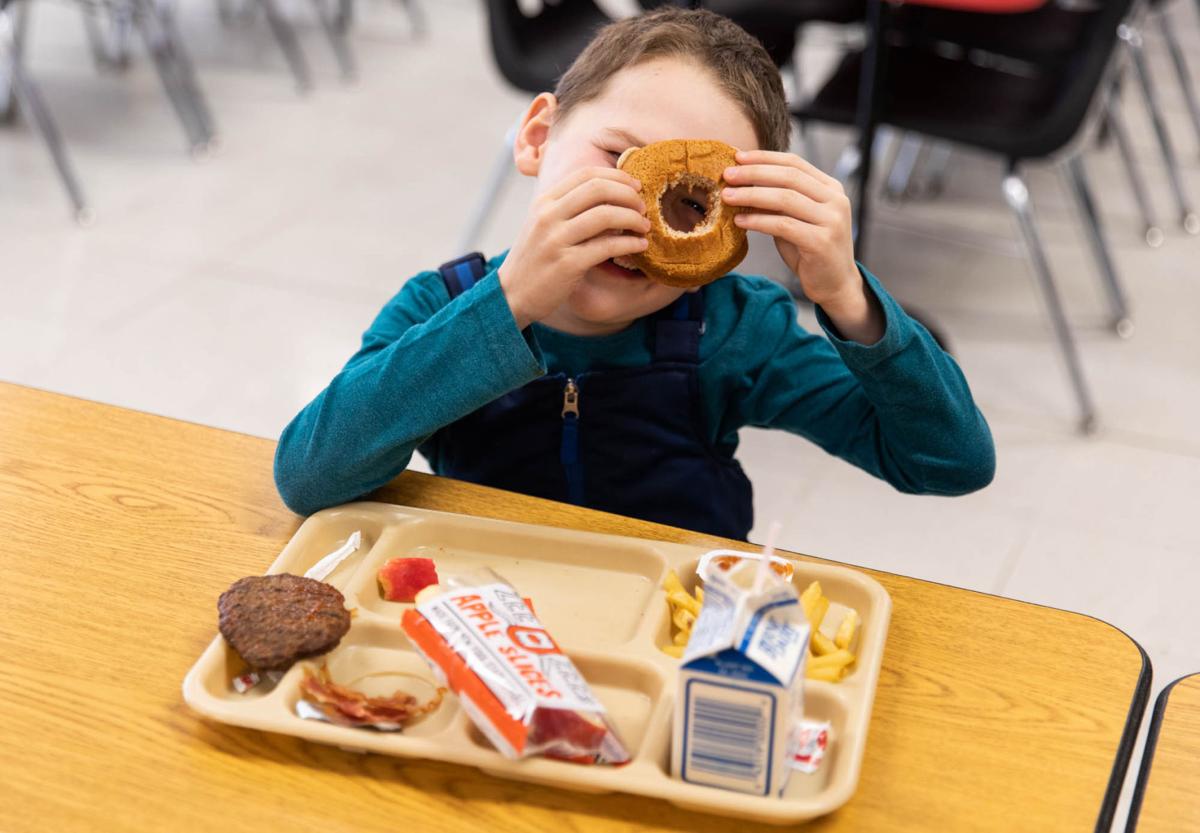 Colt Meiss, 6, a first-grader at Lowville Academy and Central School, holds a piece of bread he poked a hole into up to his eye during Wednesday’s lunch period at the school. Sydney Schaefer/Watertown Daily Times

Steven Fuller, food services director at Lowville Academy and Central School, points to the school’s lunch menu Wednesday inside the school’s cafeteria. The menu has a variety of items made with New York state sourced ingredients. Sydney Schaefer/Watertown Daily Times

Colt Meiss, 6, a first-grader at Lowville Academy and Central School, holds a piece of bread he poked a hole into up to his eye during Wednesday’s lunch period at the school. Sydney Schaefer/Watertown Daily Times

LOWVILLE — The milk and cheese in homemade Alfredo sauce, pork in a Mexican bean bowl, the pumpkin in the pumpkin soup, the french fries, the hot dogs, Concord grape juice, apple slices: all part of the lunch options served Wednesday to students at Lowville Academy and Central School and all grown and made in New York state.

The maple in the maple vinaigrette salad dressing and the yogurt and milk in the school’s signature banana-berry smoothies are even more local. They are products from Lewis County.

For Food Service Director Steven Fuller, buying food produced locally in the state, county or region as often as possible is the next step in his mission to best serve the students.

For the past nine years, Mr. Fuller has been working to find ways to improve school lunches and open young minds to new food options and flavor palates.

He added Taste It Tuesdays, featuring more exotic options, and, for the past two months, New York Thursdays, in which the meal, main course included, was made with locally sourced ingredients as a step toward full participation in the state’s Farm to School initiative.

Although he wasn’t able to build New York Thursday menus for February and March, Mr. Fuller said he is still incorporating local ingredients and products daily as often as he can.

On Thursday this week, egg rolls made in New York state were served with the oriental chicken, and on Feb. 27, sausage made in the state is scheduled.

Whether ingredients are sourced locally or traditionally, Mr. Fuller said he strives to create non-traditional cafeteria options from food cultures around the world.

“We do typical things, too, but we want to offer the kids opportunities to try new things,” Mr. Fuller said.

Every day in the area originally known as “the snack bar” where wraps used to be the popular item, a la carte dishes like homemade soups, specialty salads, specialty pizza and international dishes are available, while the more typical options are often served on the full meal line.

Standing in line at the snack bar, Alex Stockum, 16, and Rosemarie Murphy, 15, said they like the homemade dishes and trying new things, describing the options as “interesting” and agreeing that, so far, they have liked what they’ve tried.

“I live on a farm and I think it’s awesome for the economy locally,” said Hayden Beyer, 16, when asked about the use of Lewis County-produced ingredients.

After sitting down with her slice of broccoli Alfredo pizza, Hannah Webert, 16, who works on a dairy farm, said buying local doesn’t just benefit the dairy industry and its workers, but also people whose jobs depend on the success of local dairies.

“It really does matter,” she said. “And I think it’s really important for other people, too. My dad’s a cow breeder and so the better the dairy farms are doing, it helps him, too.”

Six-year-old Ella Goldsmith, with a ketchup-smeared grin, said she loved the hot dog made in Utica with locally produced beef, but that she loved ketchup even more, while at another table, Parker Sullivan, 7, who lives on a farm, said he would be happy if things from his farm were served at lunch.

Mr. Fuller said it’s the response of the students themselves that determine what is successful and what isn’t.

“Ultimately, we want everything to taste good. We don’t want the students to dread coming to lunch,” Mr. Fuller said. “They are our clients.”

Being the only school in the region participating in the state’s Farm to School program, which started in 2015, can be challenging.

“The problem with buying many things that other schools don’t, but not in huge quantities, is that you have to special-order everything. Until more schools source foods made in the state, distributors won’t keep them stocked,” Mr. Fuller said.

Although some national food processing companies are also on board with the program, the same issue is at play.

Earlier this month McCain Foods announced it has created french fries for school food service programs using only potatoes grown in the state, estimated to be 1.2 million pounds of potatoes. Lowville Academy is one of the 100 schools that is ordering the fries.

“McCain has the french fries with local potatoes, but if no one else wants them, I still have to special order,” Mr. Fuller said, adding that to get Welch’s grape juice made with New York grapes, he had to order an entire pallet directly from the producer.

Mr. Fuller said with the challenge of finding a regular supply of food produced in the state from local distributors, he is reconsidering doing an entire ‘local’ meal every Thursday, or even whether or not it needs to be an entire meal to be successful.

“I try to use as many locally produced items as possible every day. It may not be a whole meal, but usually there is a part of each meal or a number of a la carte items that are made with locally produced foods,” Mr. Fuller said.

Of the 1,150 meals on average Mr. Fuller and his team serve every day, about 900 of them are reimbursable by the state.

This year is a test run, Mr. Fuller said, to figure out if it’s viable to source 30% of the food he serves from New York state products to receive an additional 25 cents reimbursement from the state per meal and whether or not it’s worth the extra work and cost to get the extra reimbursement.

“Only a couple of schools made it this year. The Buffalo city district spent almost a million dollars to get about a million,” he said.

But in a break-even scenario, the benefit to both the farmers across the state and in Lewis County adds considerable value.

“The closer to home the better, because it benefits local families,” Mr. Fuller said.

It will take time to build enough locally produced products to get the financial benefit, Mr. Fuller said, but he is dedicated to incorporating items in any way he can to get there and engaging up and down the supply chain to drum up interest.

To that end, he will speak directly to farmers at the March Farm Bureau meeting and hopes to reach out to other school food service directors next year after he has a better understanding of what it takes to participate. He is also involved with the state committee for the program and the county Ag Sustainability Council.

“It takes time,” Mr. Fuller said. “And each layer builds on the next.”