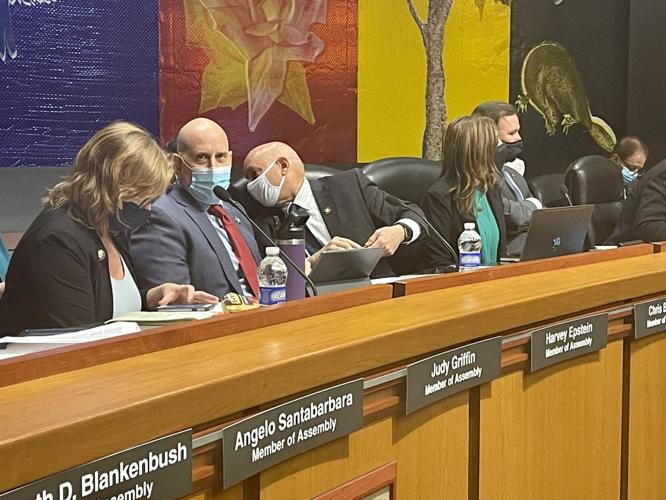 Lawmakers talk during an Assembly hearing on climate change expenditures in the Legislative Office Building in Albany on Monday. Kate Lisa/Johnson Newspaper Corp. 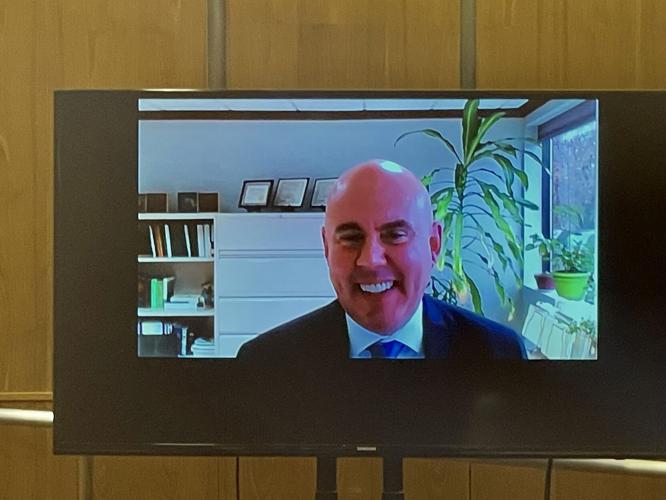 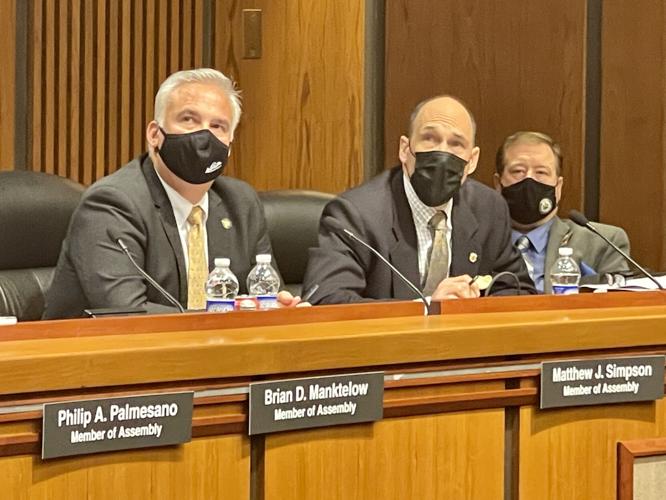 Lawmakers talk during an Assembly hearing on climate change expenditures in the Legislative Office Building in Albany on Monday. Kate Lisa/Johnson Newspaper Corp.

ALBANY — The state has enough resources to reach about half of its legislated climate goals to reduce greenhouse gas emissions through 2050, energy officials said Monday, as lawmakers pressed them on clean energy’s anticipated cost to taxpayers to address climate change.

“So we have a good distance still to go,” Williams said. “We have put into motion, you know, enough megawatt to be able to reach virtually half of that 75/30 goal.”

The state has solid mechanics and machinery in place, but needs to work with developers and local communities to achieve numerous projects to achieve its required climate goals, Williams said.

New York state is responsible for about 0.05% of the total global CO2 emissions.

Several assemblymembers in the chamber’s Environmental Conservation and Energy committees and its Climate Change Work Group questioned seven witnesses Monday during an Assembly hearing in the Legislative Office Building in Albany to examine the state’s climate change expenses and their potential impact on taxpayers.

Assemblymember Phil Palmesano, R-Corning, a member of the Energy Committee, said taxpayers need to know an estimated cost of the unfunded mandates in dollars and cents of how much it would increase energy prices, or the cost to convert their homes to use other fuel sources.

“It’s not just enough to say that it’s going to reduce asthma and cancer,” Palmesano said of the CLCPA. “People need to know how this can impact their utility bills and business’s electrification costs.”

The 22-member Climate Action Council is preparing a draft scoping plan with details about how the state can achieve its ambitious energy goals in the next three decades.

The council is scheduled to meet and discuss the plan at its regular meeting Tuesday.

“The intention is to deliver that by the end of the year,” said Maureen Leddy, director of the state Department of Environmental Conservation’s Office of Climate Change, who testified Monday.

The department is expecting to invest $12.7 billion in clean energy initiatives over the next three years.

The majority of the initiatives were designed and implemented by the state Public Service Commission, Williams said.

PSC and NYSERDA staff consider cost when designing the initiatives, which are sometimes felt by ratepayers. The Public Service Commission was not a participant in Tuesday’s hearing.

Lawmakers in both major political parties asked officials how they will combat climate change without significantly increasing the burden on taxpayers.

“It’s that competition that will allow us in our review of the proposals that come in through our solicitations to be able to understand what the prices are that are being offered and utilize that price information to ensure that we are getting the lowest possible cost,” Williams said.

He did not discuss estimated figures.

Most of the department’s budget is dedicated to looking at climate change opportunities and emissions reduction opportunities, outside of a few legacy programs and initiatives, Williams added.

NYSERDA does not have requirements for workers in their contract for retraining on clean energy. The department offers apprenticeships and on-the-job training programs for workers looking to establish themselves in a clean-energy career, Williams said.

The Legislature voted in 2017 to require NYSERDA to conduct a cost-benefit analysis of the state meeting a 50% renewable energy goal by 2030. The department has not released the required analysis.

The state’s energy policies have changed since 2017, especially with the passage of the CLPCA, changing the various cost elements, Williams said.

The department continues to take these changing factors into an account, Williams said, but he did not indicate when the report would be finalized or released.

The state Office of Climate Change is funded by the state Electric Power Services. About $10 million is allocated to the Climate Smart Communities program to give municipalities grants for projects to reduce greenhouse gas emissions, with smaller amounts allocated to other research projects.

Leddy did not have specific figures when asked by lawmakers about how much the Climate Change Office spends of its allocated amount in the annual state budget.

Palemsano questioned Leddy about the lifespan and negative environmental impact in creating solar panels and batteries for electric vehicles while potentially increasing waste and chemicals from solar panel arrays, which continue to be constructed on upstate farms and agricultural lands.

Developers have access to alternatives to reduce the amount of greenhouse gas emissions to create clean energy infrastructure. The DEC will ensure aging infrastructure will be recycled or offer a place for safe disposal, Leddy said.

Republican assemblymembers also raised concerns about the reliability of clean energy, such as solar or wind power infrastructure.

“Reliability is certainly top of mind for the council,” Leddy said. “The CAC are still pulling together their draft scoping plan. I believe the plan, when the council is ready to release it, will adequately address these kind of concerns.”

The draft scoping plan will address societal costs and benefits and considerations if other countries and U.S. states fail to make similar investments to combat climate change, Leddy said.

Some lawmakers asked about New York’s investment in climate change becoming moot if countries like China, India and others with larger carbon footprints do not take similar action.

“I think the hope is that, you know, if we see the writing on the wall, the world is going in a different direction,” Leddy said. “There’s a lot more seriousness around climate action.”

The state’s environmental protection programs include an investment of $37 million to date in the Climate Smart Communities program and $5 million distributed through the zero-emission vehicle program established in 2016.

About 18% of both funds have been awarded to low-income municipalities.

Disadvantaged communities are supposed to receive 40% of the grant funding or benefits under the CLPCA.

Assemblymember Chris Tague, R-Schoharie, repeatedly asked for a definition of “environmental justice” and clarification of the criteria that defines a disadvantaged community, criticizing both as too broad.

Officials replied the criteria continue to be developed and finalized by the members of the Climate Justice Working Group.

The group continues to study many indicators to write the criteria, Leddy said, but she would not provide specifics.

“The group is hoping and it seems like they’ll have their criteria in their draft definition up for public comment very soon,” she added.

Wonder why NYS has the highest energy costs?

When Queen Elizabeth II dies or steps down who do you think will be the next monarch? Her son Charles is the next in line, but he might let his son William be monarch.