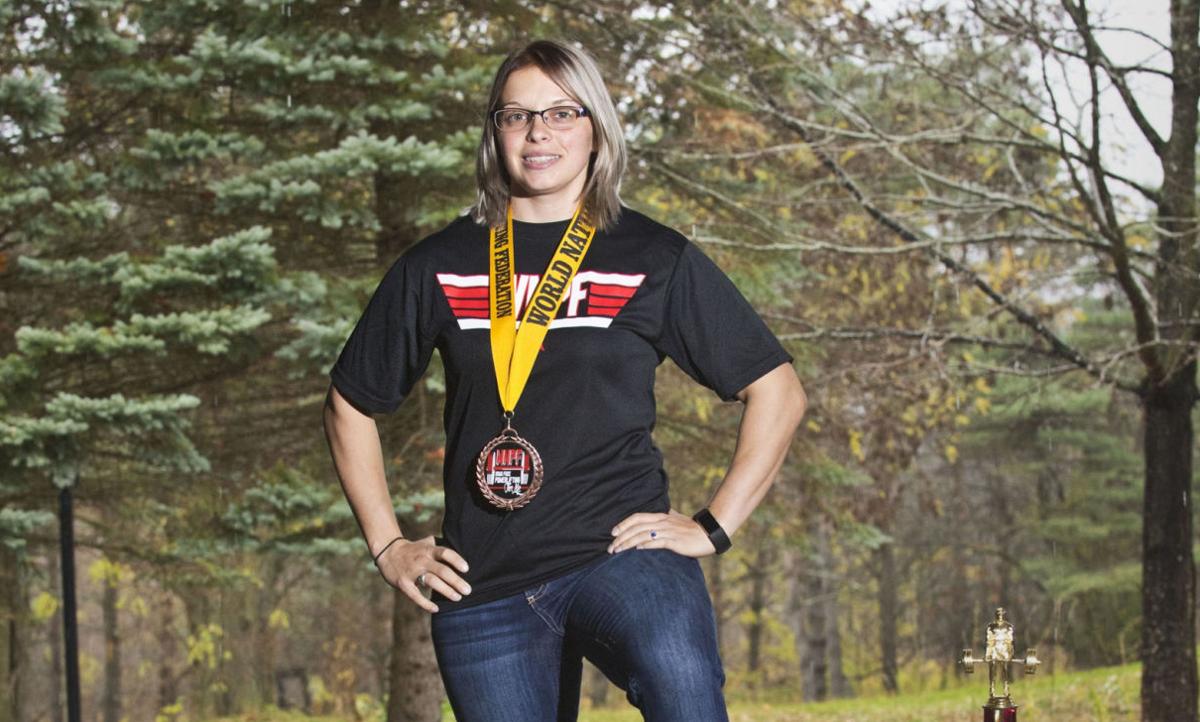 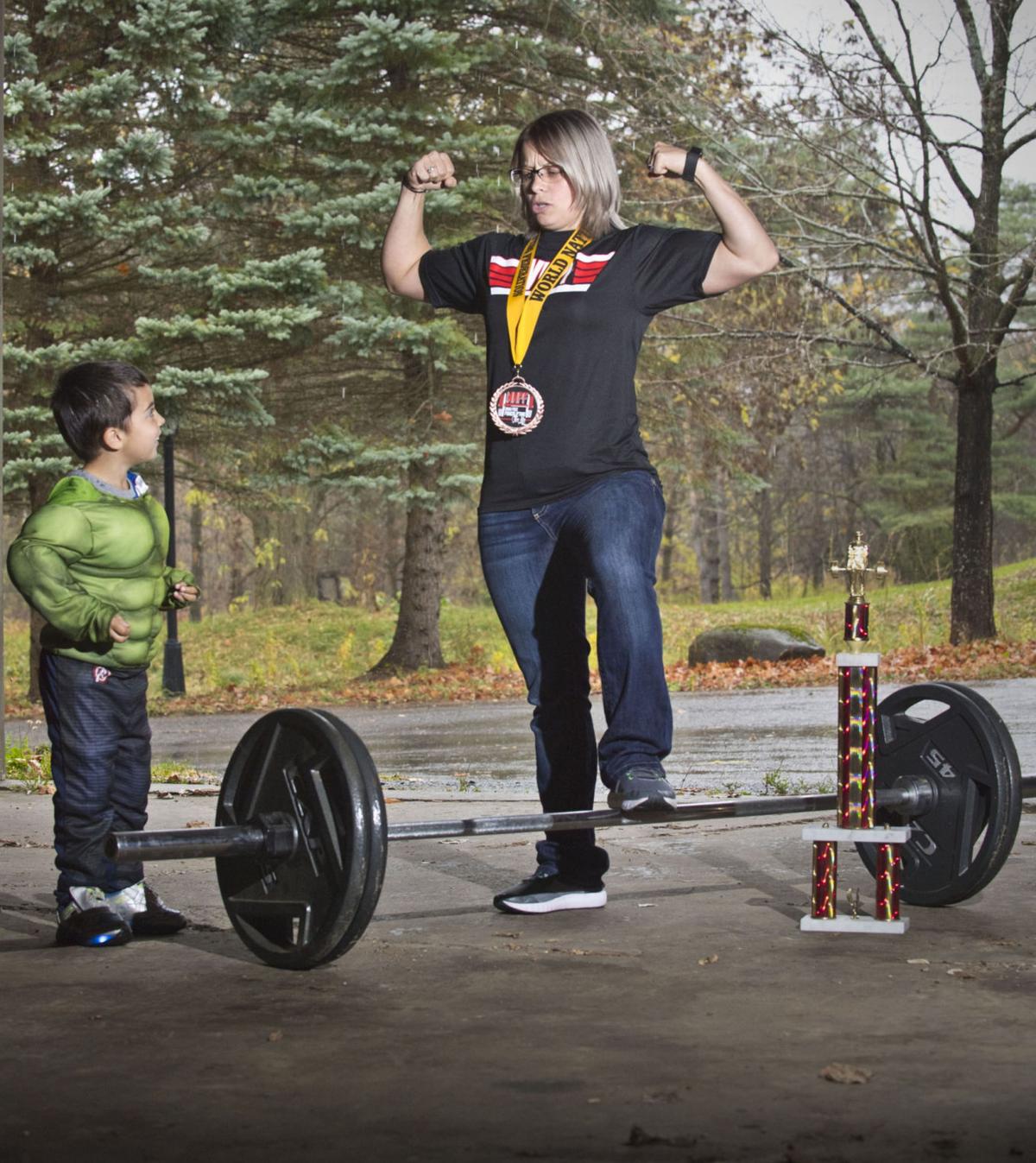 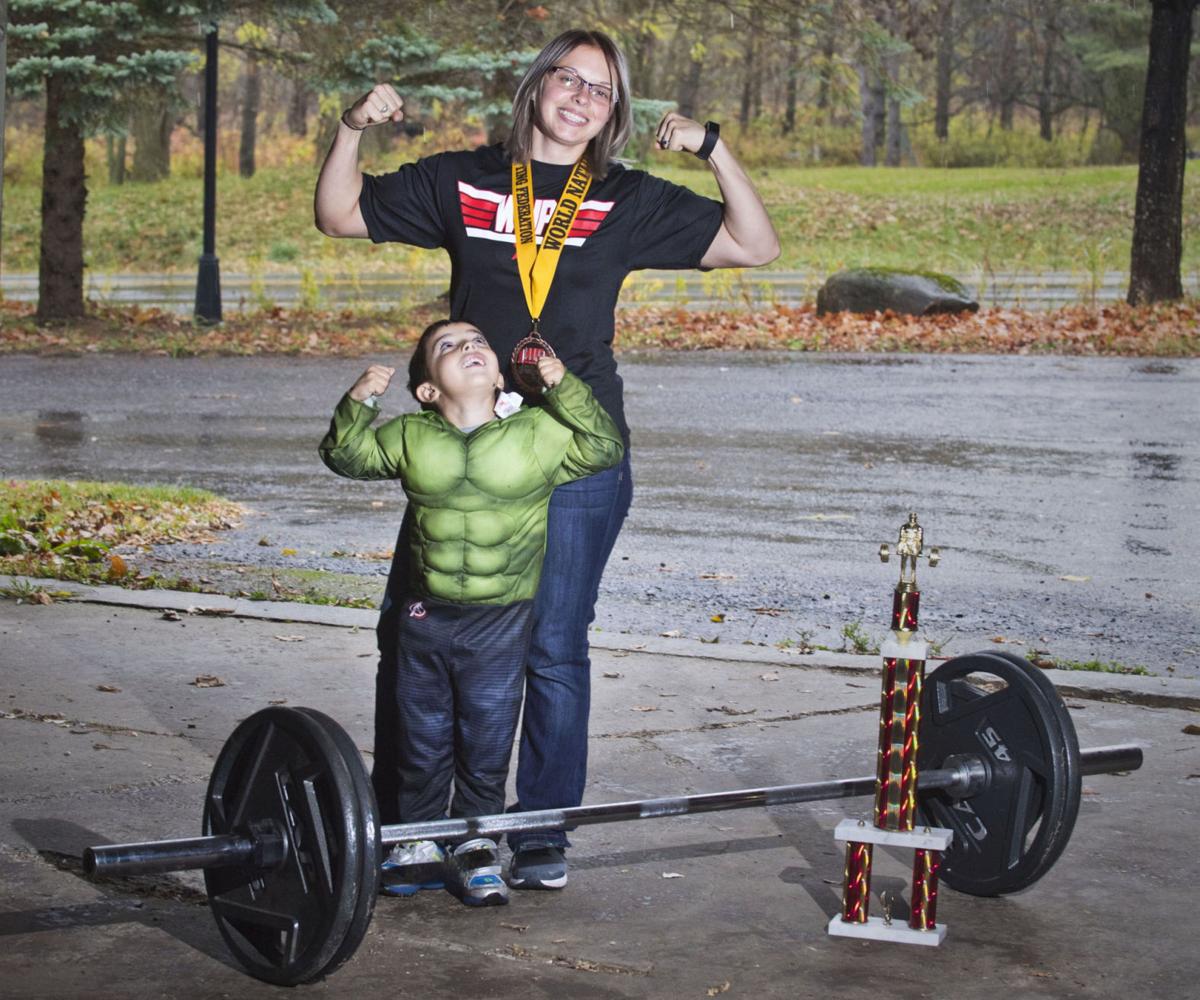 POTSDAM — When 33-year-old Vanessa L. Babcock began weight lifting as a hobby nearly a decade ago, it was never with the intent to set world records.

But that’s what she’s been doing as a member of the World Natural Powerlifting Federation, which is a drug-free, drug-tested federation with no steroid use.

“It’s a smaller federation than, like, more well known ones like USAPL (USA Powerlifting) and IPL (International Powerlifting Federation), but it’s a really close knit community,” she said. “So it is nice to go into a competition and feel like that.”

She set five world records in the 123-pound weight class and was given two awards, competing against five others in her weight class.

A senior systems engineer at Canton-Potsdam Hospital, Ms. Babcock spends her days managing server and hardware infrastructure for the hospital, but when she clocks out at the end of her day, she goes to the gym and works on her body, which has become a finely tuned machine.

On a rainy Halloween afternoon in her Potsdam home, she watches as her 4-year-old son, Rolan Otero, dressed in a little Hulk muscle suit, flexes to show off his make believe muscles for guests.

When she thinks about the contrast between her career and her hobby, she laughs, remarking upon reactions she gets from colleagues.

“I guess they are pretty opposite,” she said. “If I walk in and say, ‘all right guys, what’s going on with this?,’ they typically say, ‘Oh, don’t throw me into the sun!’ So they make a lot of jokes.”

But her workout is no joke. A typical Monday through Friday workout goes for two hours and, if she can squeeze it in, a Saturday.

“I started lifting about eight or nine years ago. It was just a hobby,” she said. “A friend wanted to go and so I lifted in high school. I played a lot of sports, track, soccer, all that — I always liked it, so I decided to go with him and for about the first three years I was just going as a hobby to stay in shape.”

She said she lifted all through her pregnancy and after Roland was born, she became more serious about her workouts. “The next two years I really tightened up my nutrition and started building plans specific to building strength,” she said. “Then, a regular at the gym asked if I ever thought about competing and I thought I would try it.”

Her first meet was in 2017 where she set four state records.

“So I thought I must be pretty good at it, and just been competing ever since.”

Getting ready for those meets, Ms. Babcock said she sticks to a constant workout focused around the primary lifts at the events. The hard part, she said is the nutrition and getting down to a certain weight class.

“When you are powerlifting, the more weight you have the more it works in your favor. But I’m a small woman. I’m 5 feet 0,” she said. “So for me I don’t want to be bulky. I want to be strong but in somewhat of a lean way, so the nutrition part is the really hard part of it.”

Between two and three months leading up to a competition she turns to a high fat, high protein diet, cutting out all processed foods and eating mostly meat and veggies, and does extra cardiovascular exercises like running, hiking or jumping on the trampoline with her son.

And while all the regiment and discipline can seem strenuous, Ms. Babcock said it came naturally to her.

“I’m pretty in tune with how my body works, I don’t know, it just comes natural to me. I’ve always been a very disciplined person,” she said. “So it’s good to know that all that hard work and dedication pays off.”