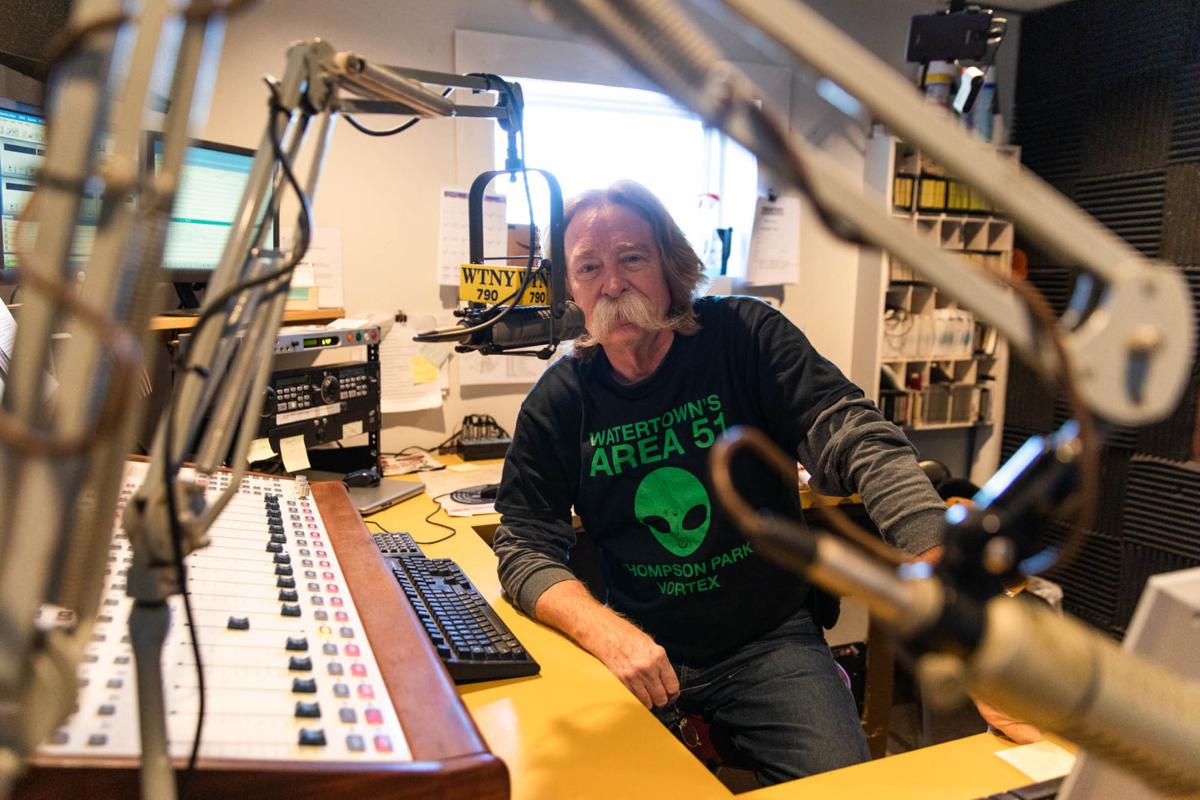 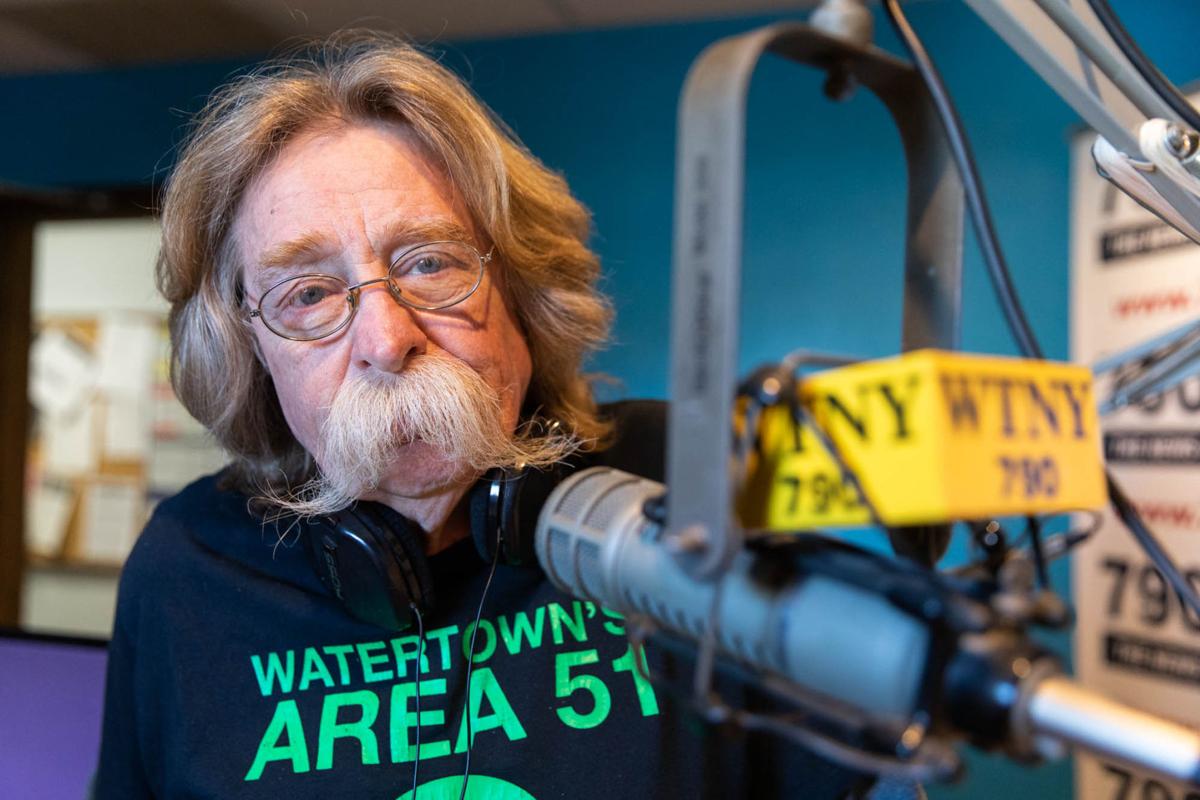 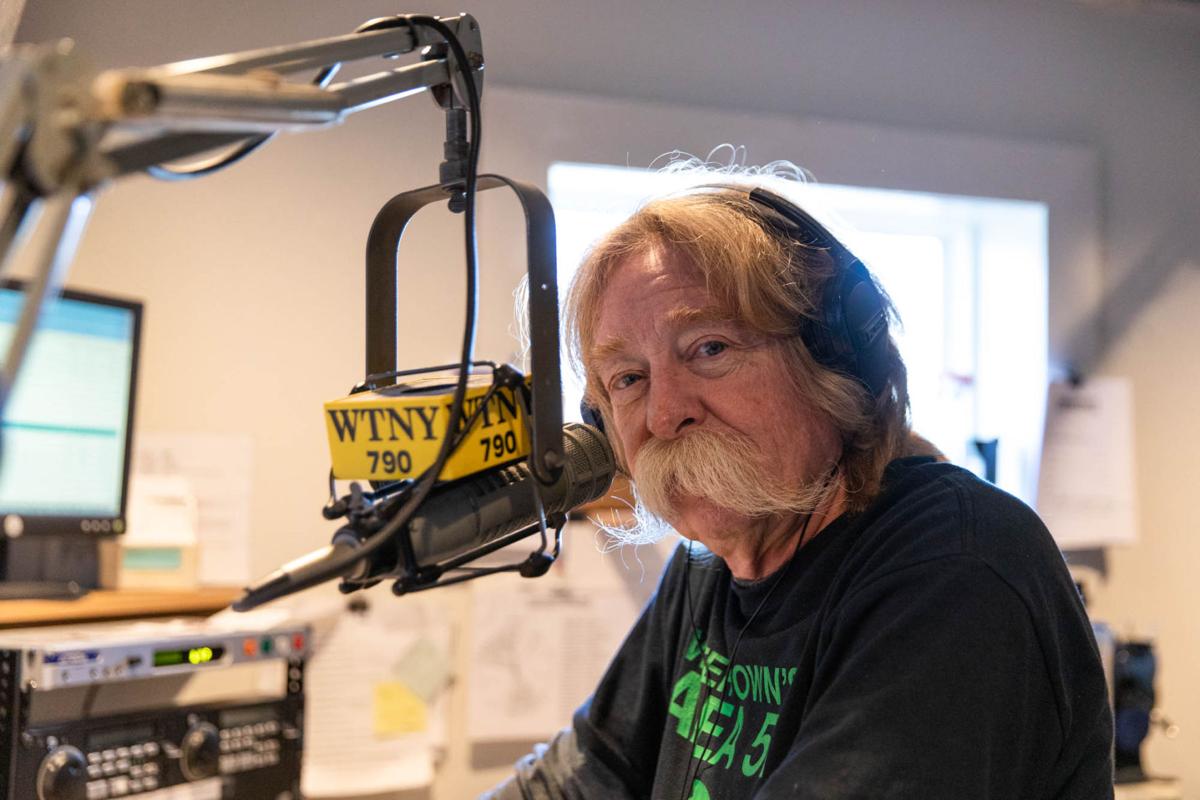 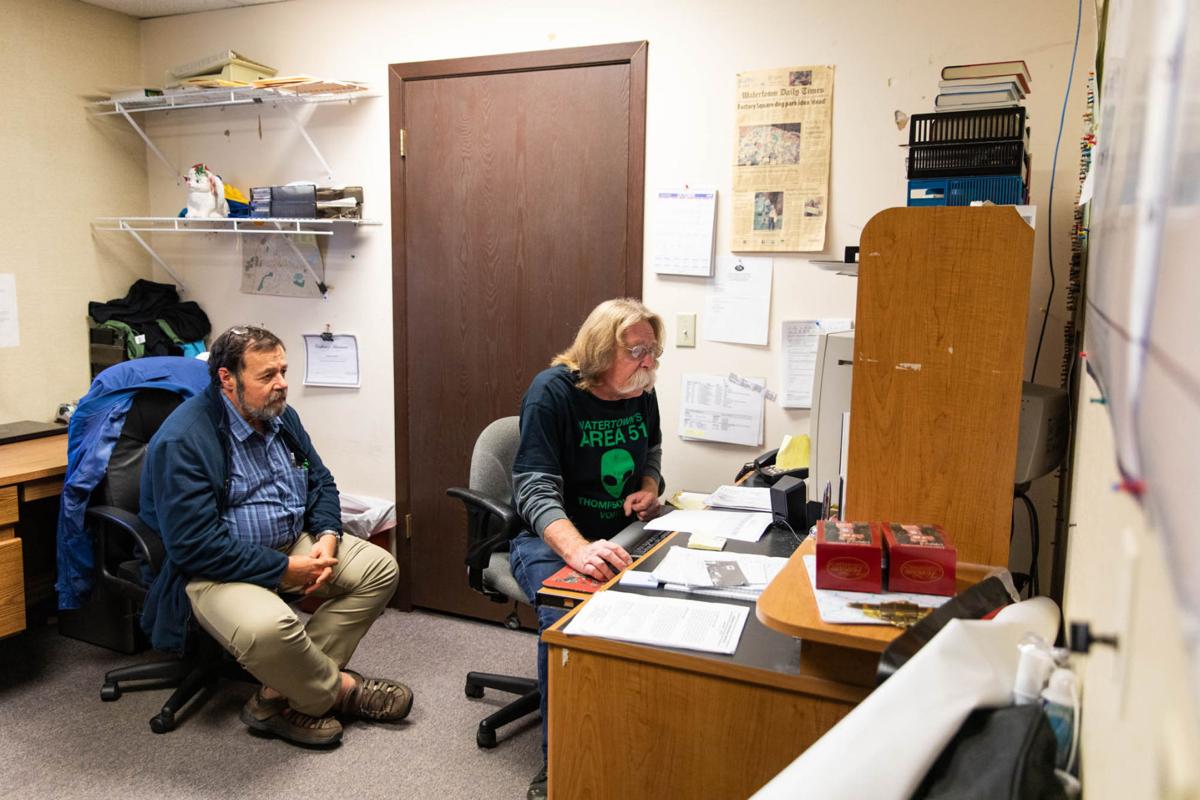 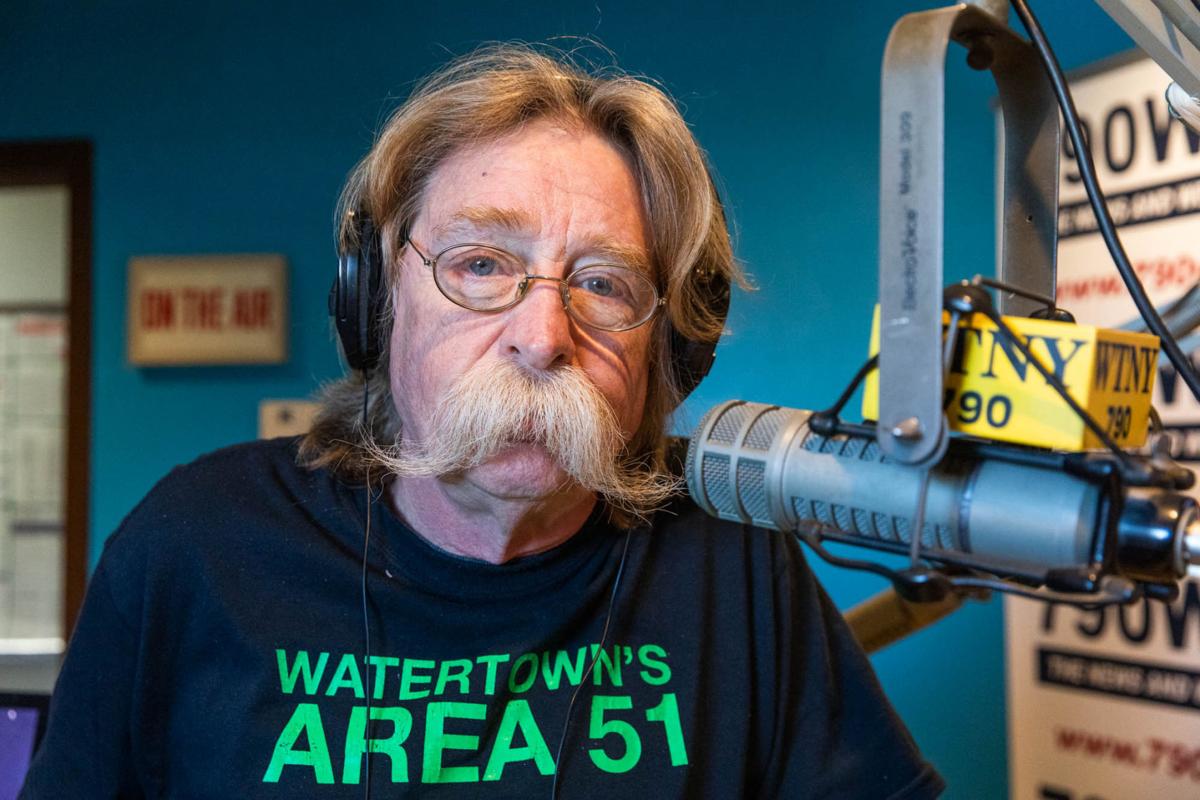 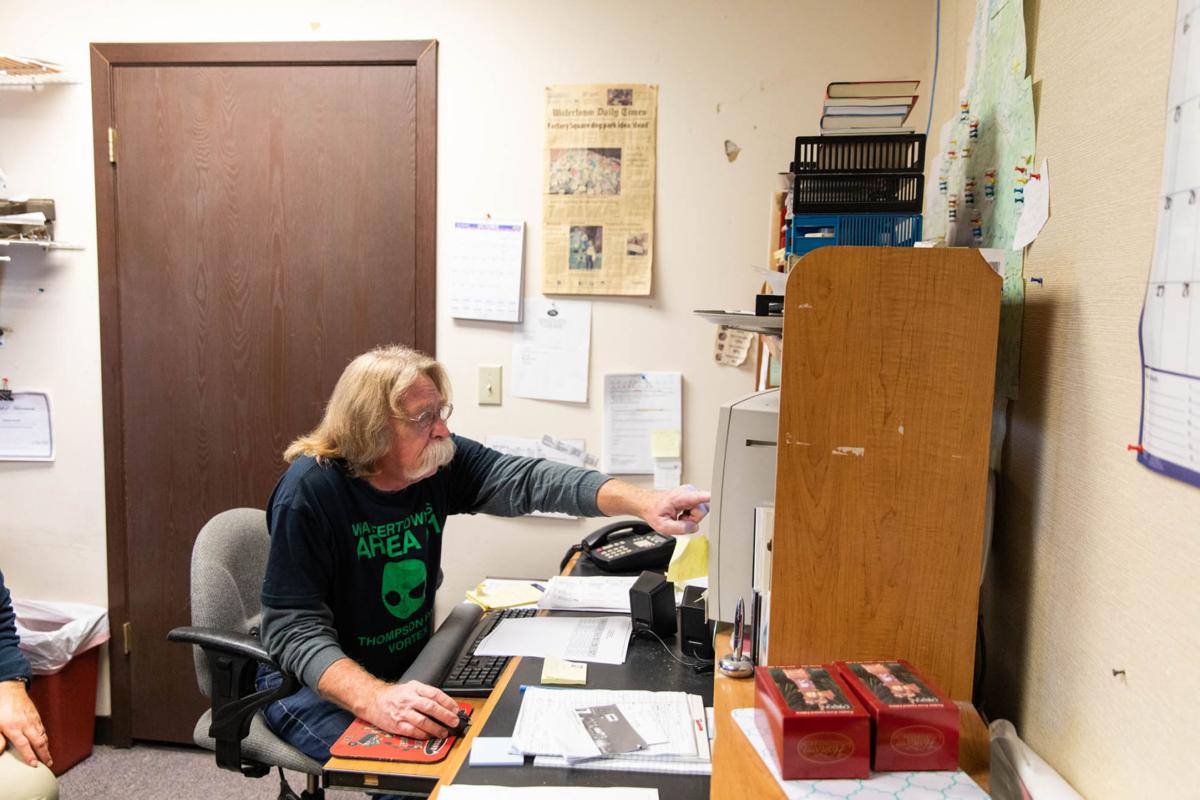 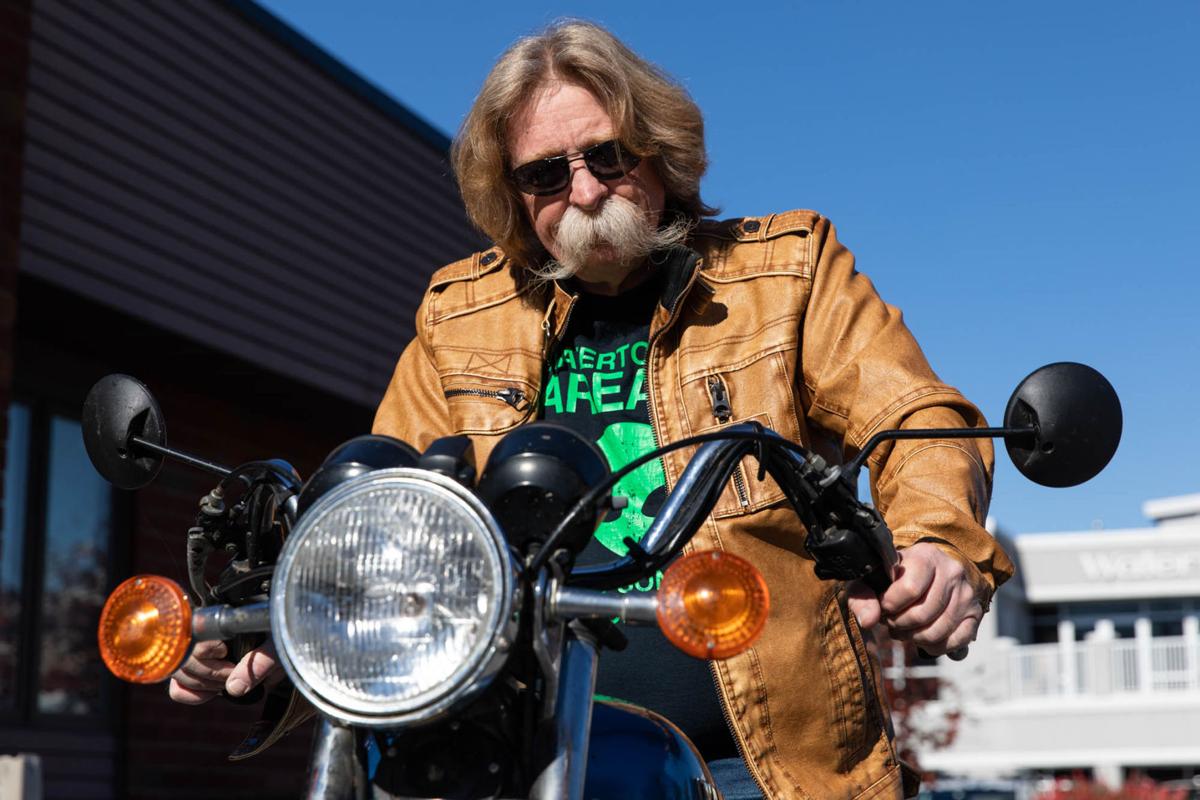 Alan Walts poses for a portrait on his 1981 Yamaha SS400 motorcycle Monday outside the WTNY-AM 790 studio in Watertown. He bought the bike from his brother. He’s relatively new to the sport and put a couple thousand miles on the machine this past summer. Sydney Schaefer/Watertown Daily Times 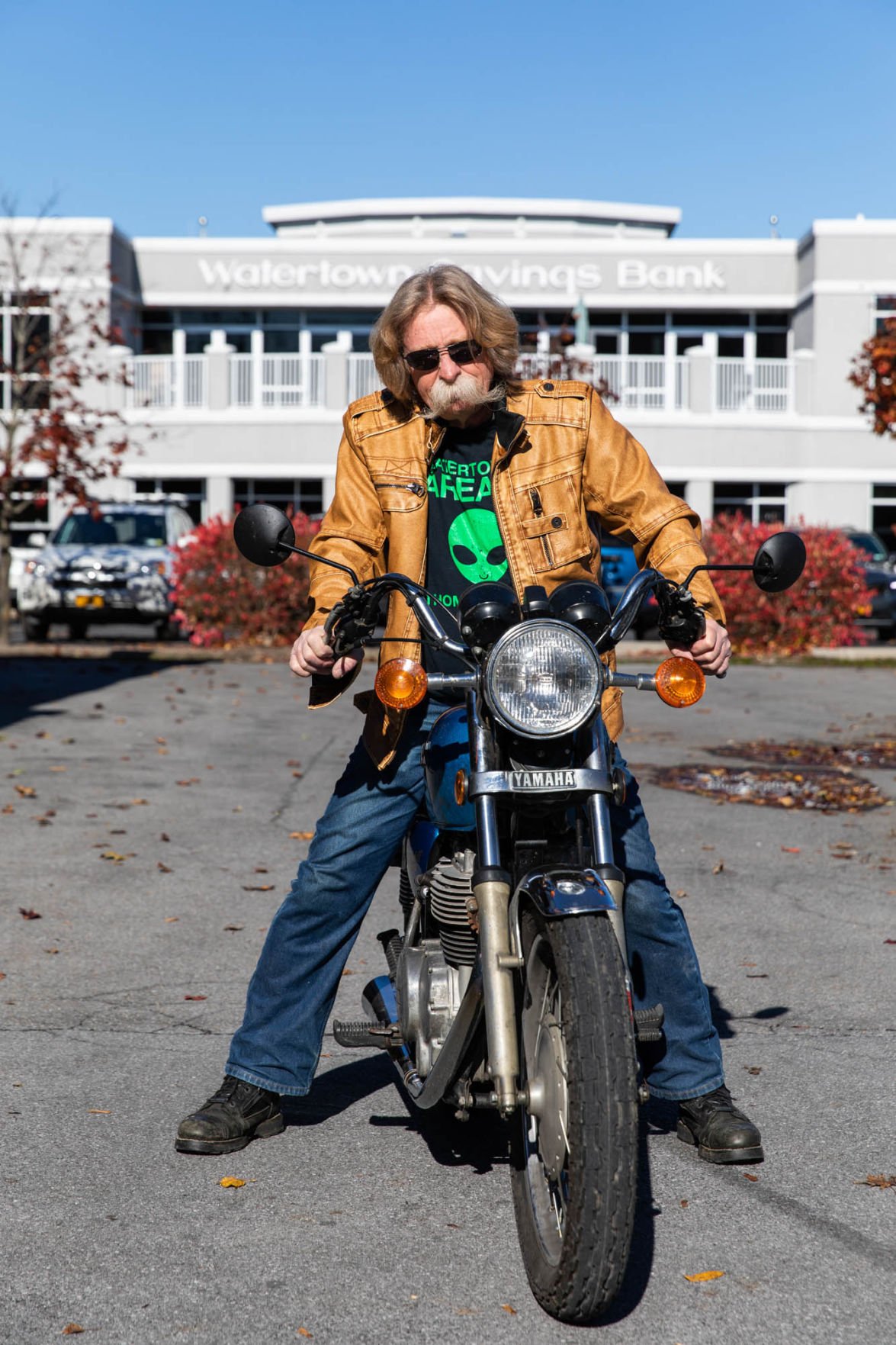 Alan Walts poses for a portrait on his 1981 Yamaha SS400 motorcycle Monday outside the WTNY-AM 790 studio in Watertown. He bought the bike from his brother. He’s relatively new to the sport and put on a couple thousand miles on the machine this past summer.Sydney Schaefer/Watertown Daily Times

Alan Walts poses for a portrait on his 1981 Yamaha SS400 motorcycle Monday outside the WTNY-AM 790 studio in Watertown. He bought the bike from his brother. He’s relatively new to the sport and put on a couple thousand miles on the machine this past summer.Sydney Schaefer/Watertown Daily Times

Four days after he left the radio station in retirement, Alan Walts returned to WTNY-AM 790 and found himself back in the studio for a “Sunday Portrait” interview.

But that afternoon as he prepared to chat and settled back in front of the control board from where he hosted “Watertown’s Morning News,” something just didn’t feel right. It actually felt better.

These exclamations, and several others in the interview, were colored by Alan’s signature, hearty laugh, a grand guffaw, that WTNY-AM listeners knew well. He still has the laugh, but not the job. A few months ago, he told listeners that he would retire the day he hit 67. That happened Oct. 21, concluding a 44-year career in radio.

His body clock is still adjusting to the change.

Alan, who lives three blocks away from the Mullin Street station, arrived there at 3:30 a.m., put in 2½ hours of show prep, with three hours on the air followed by other duties, finishing up his day at 11:30 a.m.

“It was intense show prep,” Alan said. “I tell everybody, and it’s no exaggeration whatsoever, this was the most difficult air shift at radio stations I’ve ever worked in in my life, and there’s a lot of those.”

Alan first got enamored by radio while growing up in Calcium.

“From my bedroom window as a kid I could see the towers up on Champion Hill,” he said. “I thought it was just magic the way the signal could travel through the air.”

Meanwhile, at night, Alan would pull in stations from far away, attracted by their music and personalities.

“I loved all the big powerhouse stations when I was a teenager — WBZ in Boston, WABC in New York, WCFL and WLS in Chicago,” Alan said. “The music was phenomenal and it was before radio became very homogenized. Personalities meant something in those days.”

He recalled two other notable events that led him to the path of communication and media.

“My mom took us kids one year to see ‘White Christmas’ when it was re-released,” Alan said. “We saw it at the Avon Theater on Arsenal Street. They had parts in it with sort of an inside look at TV and radio and that sort of thing. I was intrigued and it got me interested in media somewhat.”

In sixth grade, his class took a field trip to the Watertown Daily Times.

“I always enjoyed going through the paper and to see how it was put together, I found it amazing, with the bank of teletype machines in those days clanking away and spitting out the news and pictures,” Alan said.

But after he graduated from Indian River Central School District, he didn’t have a plan.

“I just bummed around in a lot of different jobs,” he said. “Finally, I decided I better do something.”

Radio was in the back of his mind, but he didn’t know how to get into the business.

“In the early ’70s, employment was really hit or miss around here, unless you wanted to work at Air Brake,” Alan said. “I worked there for about two weeks and couldn’t take it. I found out that factory work was not for me.”

His path to radio finally began in the basement of Flower Memorial Library, where he found some books to guide him.

“In those days, which isn’t the case anymore, pretty much the only way to get a radio job was to get an FCC third class license with broadcast endorsement,” Alan said.

The books were his study guides and he eventually headed to Buffalo to take the FCC test, which were corrected on the spot. One test element involved some math, and Alan witnessed fellow test-takers being dejected after they were told they failed that part and their licenses denied.

“I’m sitting there next to the woman marking the tests and feeling all dejected because I was sure I wasn’t going to pass,” Alan said. “And she said, ‘Congratulations Mr. Walts, you passed all three elements.’ I was surprised!’’

Back in Watertown, he was hired part-time by GE Cable, where he learned some television production. That was followed by a stint at WIGS-AM in Gouverneur.

“And then the blizzard of ’77 hit,” he recalled. “I said, ‘It’s time to get out of here.’ There wasn’t really anything holding me here so I moved to Florida.”

He spent a year in Louisiana and 27 years in Florida, where he worked several years for WSIR in Winter Haven. When he began there, he was the youngest worker at the station.

“That was like going to radio grad school, working with all these old pros,” Alan said. “I just sucked in whatever I could.”

He returned to the north country in 2005 due to family reasons. He was hired by WWTI Newswatch 50, a television news operation that ended its 6 and 11 p.m. newscasts in 2004 but continued its news updates throughout the day.

George, with his deep, sonorous voice, and who helped to guide Watertown through ice storms and snow storms, was Alan’s mentor.

“During my teen years, I used to listen to him all the time,” he said. “He was one of the greatest broadcasters I ever met. It was a real thrill for me to come and work for him. He was the pro’s pro as far as broadcasters go. And what a voice he had.”

Lake other media outlets, Alan has seen radio undergo a technological revolution, with automation and analog to digital. It’s made tasks easier, but he particularly misses reel-to-reel tape machines.

“I dearly love them up to this day,” he said. “It was very hands-on, with splicing and razor blades and tape. I just loved that and I knew the ins and outs of those machines and could do all kinds of tricks with them. There’s not a piece of tape anywhere in here anymore.”

But it was the basics, connecting with an audience, that Alan treasured — something that especially came to light during his final days on the air.

“The WTNY audience is the most amazing and loyal in my entire experience in broadcasting,” he said. “When I announced around April that I was going to retire on my birthday, all of a sudden I couldn’t go anywhere without people saying, ‘You can’t retire’ or ‘It’s been wonderful listening to you’ to the point of it being overwhelming. I always knew this station had a lot of impact on the area, but my personal impact? Apparently, I never realized what it was until especially, the past few weeks.”

But when asked if he had second thoughts about retiring, a resounding “No!” and a signature laugh, were the responses.

In retirement, he plans to fulfill a longtime dream and become a snowbird, spending winters in Florida. He also plans to renovate a motorhome he owns in order to see the U.S.

He also recently took up motorcycling. He purchased a 1981 Yamaha SS400 from his brother, fixed it up and put a couple thousand miles on it this past summer.

“It’s so much fun” he said. “It’s the old motorcycle thing — that feeling of freedom, getting out there with the wind blowing on you. You can go anywhere.”