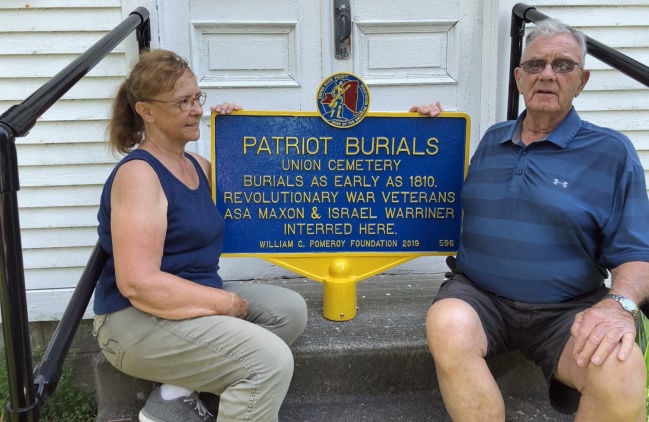 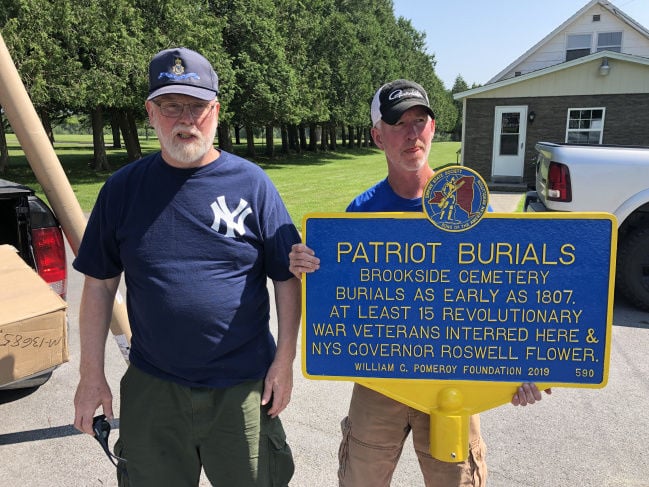 Bruce Coyne, president, Sons of the American Revolution Thousand Islands chapter, left, presents a sign to Philip Moses, superintendent of Brookside Cemetery, Watertown, where it will be installed. SAR/TIC 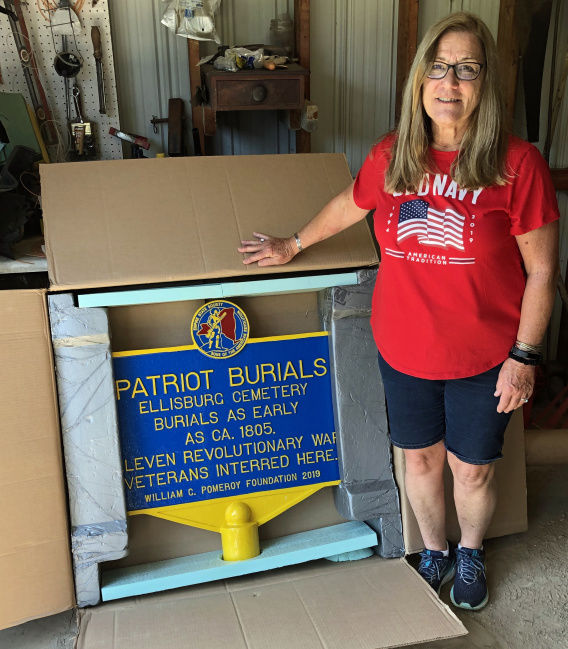 Mary Bettinger of the Ellisburg Cemetery Association receives a sign noting the cemetery is the burial site for Revolutionary War veterans. SAR/TIC 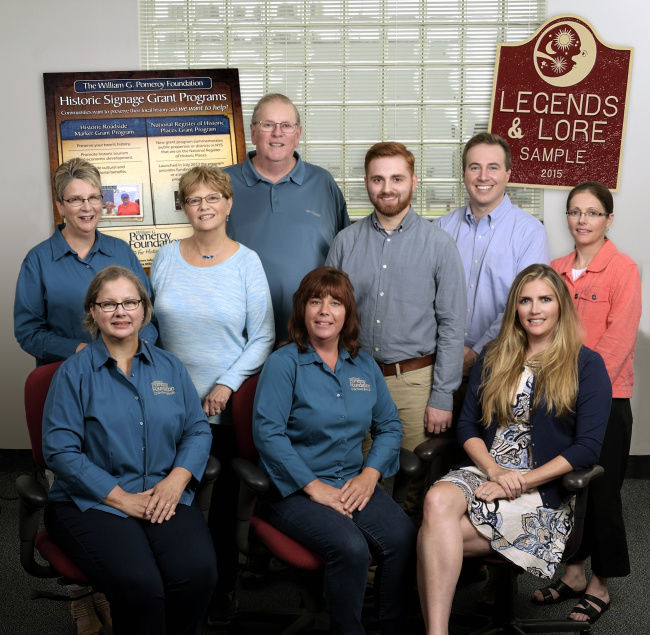 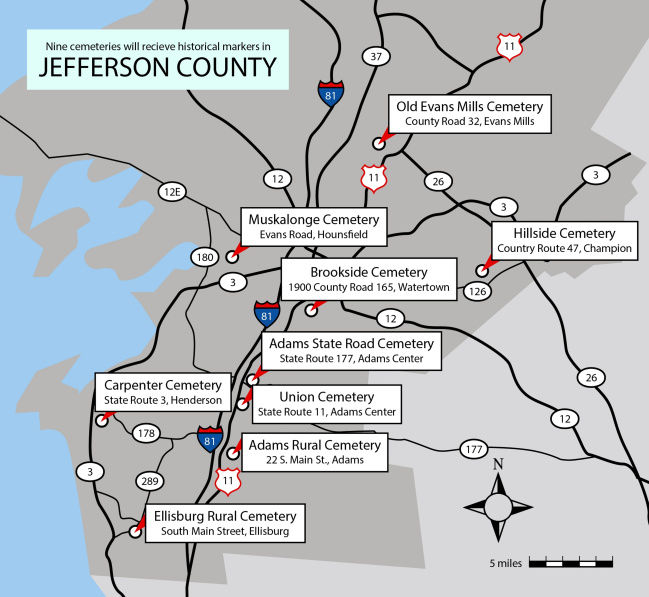 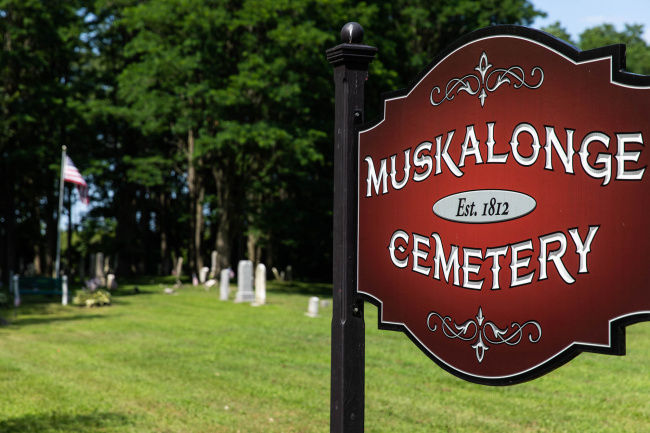 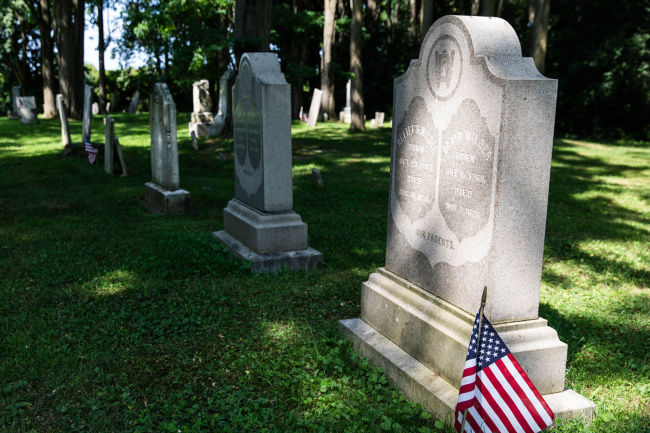 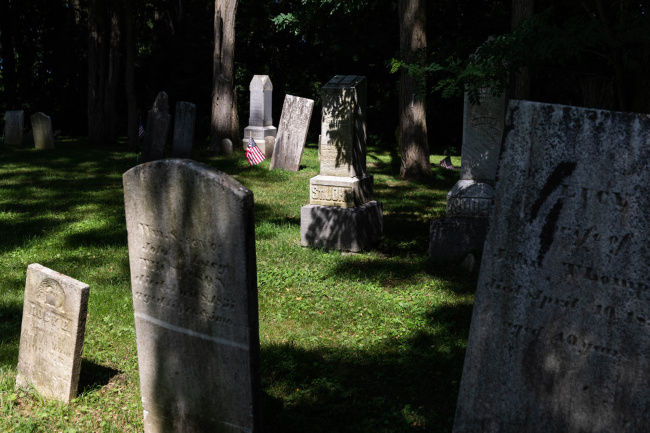 Bruce Coyne, president, Sons of the American Revolution Thousand Islands chapter, left, presents a sign to Philip Moses, superintendent of Brookside Cemetery, Watertown, where it will be installed. SAR/TIC

Mary Bettinger of the Ellisburg Cemetery Association receives a sign noting the cemetery is the burial site for Revolutionary War veterans. SAR/TIC

Veterans of the Revolutionary War who are buried in Jefferson County are having their fighting and pioneering spirits remembered through a sign program launched by the Thousand Islands Chapter, Empire State Society, Sons of the American Revolution.

“These patriots were willing to put it all on the line in the name of creating a country based on the concepts of life, liberty, and the pursuit of happiness,” John W. Eisenhauer, secretary of the Thousand Islands SAR chapter, said. “Don’t forget that they were going up against the best trained military in the world at the time. The least we can do is the honor these patriots with this signage as a tribute to the legacy of freedom that they have bestowed on us as citizens of the United States of America.”

The chapter has secured nine signs through the William G. Pomeroy Foundation to mark cemeteries across Jefferson County that contain the graves of documented Revolutionary War veterans. The signs will be installed in late summer or this fall.

“These are the first nine we’re doing as a ‘proof of concept’ with more to follow over the next several years across Jefferson, Lewis, and St. Lawrence counties,” Mr. Eisenhauer said.

A. Parks Honeywell, registrar of the chapter, said the group hopes to secure more signs next year.

“It’s an amazing program through the Pomeroy Foundation,” he said. “They’re very generous and very eager to work with us.”

The signs are in the traditional blue and yellow colors of New York State historical roadside markers.

The society’s signs honor area cemeteries where large numbers of Revolutionary War patriots are buried. They are financed by grant applications made to the Pomeroy Foundation by the SAR. Cemetery management and local historical organizations will dedicate these signs at each of the nine cemeteries.

New York State stopped financing historic roadside markers decades ago, but many of those signs can be found scattered around the state, many faded and shabby but still standing.

Among the missions of the Syracuse-based William G. Pomeroy Foundation is supporting the celebration and preservation of community history. It also has a mission to raise awareness, support research and to improve the quality of care for patients and their families who are facing a blood cancer diagnosis.

“New York State stopped funding historic roadside markers in 1939,” Paula Miller, executive director of the Pomeroy Foundation said in a phone interview. “Anything that has gone up after that has been privately funded, perhaps maybe by a historical society or something along that line.” Ms. Miller said the foundation’s New York State historic sign program kept the traditional blue and yellow colors.

“They are instantly recognizable,” Ms. Miller said. “When you see one, you know that history happened here.”

The signs, Ms. Miller said, are placed in cooperation with the state.

“We have a great relationship with the state historian and they’re delighted that we are funding historic roadside markers in the state,” she said.

The foundation’s sign program was limited to Onondaga County for the first five years.

“We then expanded to the surrounding counties and in 2012, we opened the program to the entire state of New York,” Ms. Miller said.

“In total, we’ve funded over 875 markers across the United States, all the way to Alaska,’’ Ms. Miller said. “We have one marker in Alaska.”

The Pomeroy Foundation has funded nearly 900 markers across New York state; 13 in Jefferson County, 12 in St. Lawrence County and 21 markers in Lewis County.

The 40-pound markers, manufactured by the foundry Sewah Studios, Marietta, Ohio, cost $1,100 and are shipped by UPS with 7-foot poles. The program is privately funded by Mr. Pomeroy, 75, who has a passion for history. He’s also a member of the Syracuse chapter of the Empire State Society Sons of the American Revolution.

“Bill has very fond memories as a young boy riding in a car with his dad and when they would stop and read historic markers,” Ms. Miller said. “Later on in years, he became very interested in historic markers in the town of Pompey. The markers were in horrible condition. Bill led a program to refurbish all of the markers in Pompey. That sort of launched the idea of the grant program of historical markers.”

“I think it’s very important, especially here in upstate New York and where they’re doing this program in Jefferson County,” said Susan Hughes. “I don’t think people realize how many Revolutionary War veterans moved to this part of New York State as part of the early United States after the war.”

“But we don’t realize that these men didn’t cease to exist after the war,” Ms. Hughes said. “They went on with their lives. They farmed, they started businesses and moved to new areas and started families.”

Many veterans came to Central and Northern New York as part of the bounty lands for military service program, which rewarded the service of soldiers.

“The federal government didn’t have any money to give them bonuses, so they gave them land instead,” Ms. Hughes said. “Many of them came up here. I think many people don’t realize they may have ancestors who fought in the Revolutionary War.”

Ms. Hughes thinks the new signs being installed by the Thousand Islands Chapter, Empire State Society, Sons of the American Revolution will be “eye-openers,” especially for youngsters.

“A cemetery that you may not have even noticed before and passed, suddenly there’s this marker there,” Ms. Hughes said. “And you think about the people buried there. It’s an important part of our local history.”

The nine cemeteries in Jefferson County that will get the historical markers:

“By understanding and recognizing the sacrifices of our forebears, we will be better able to appreciate what we do have and understand that many contemporary concerns are very minor in comparison,” said Mr. Eisenhauer.