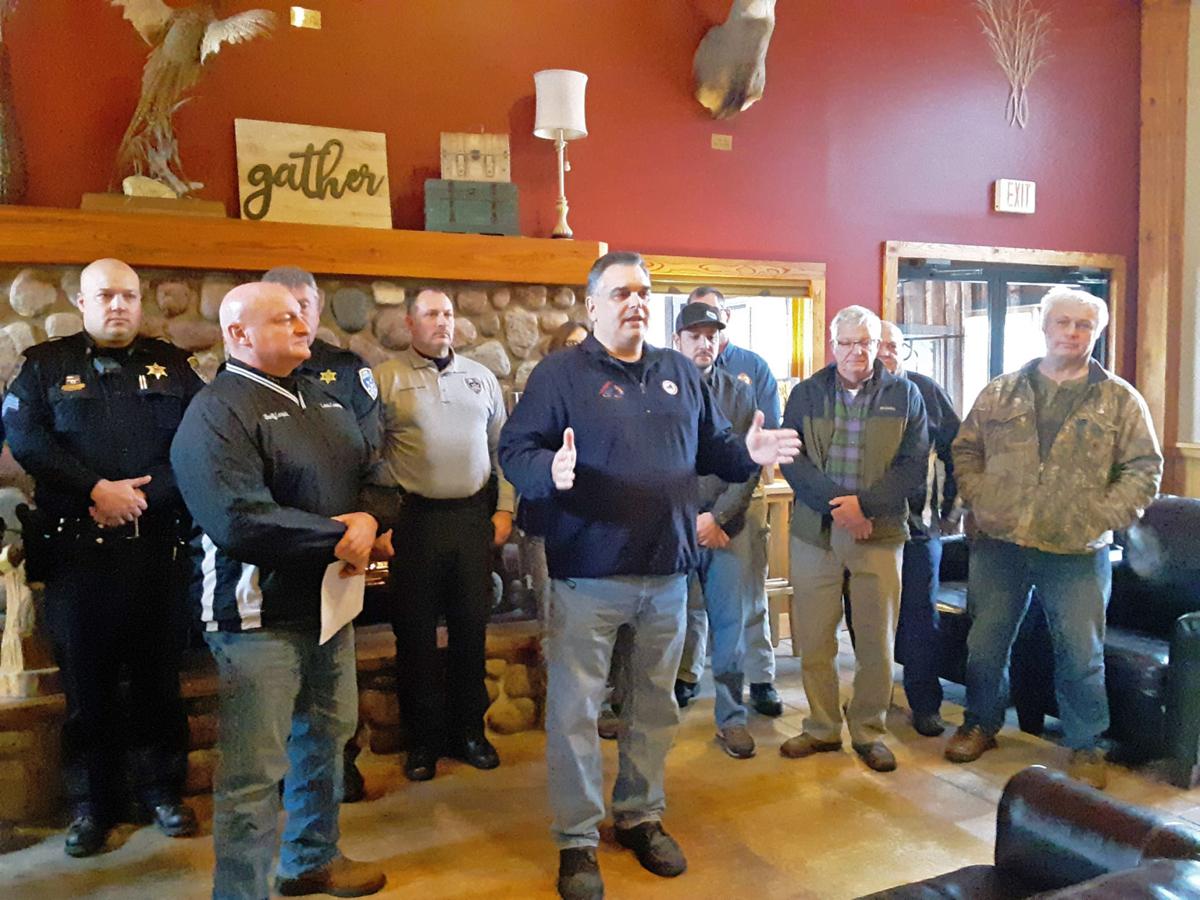 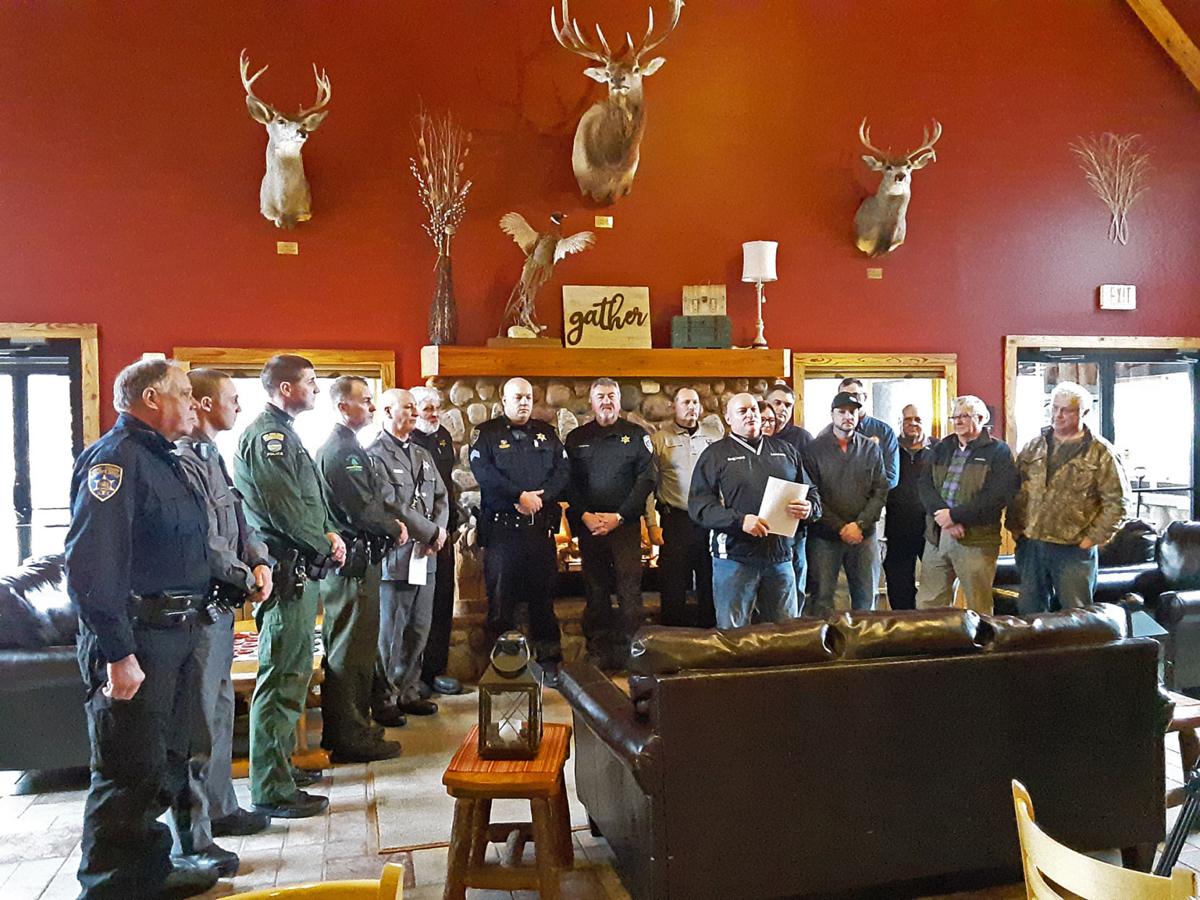 Kicking off the 2020 snowmobile season, Lewis County Sheriff Michael Carpinelli stood in front of the stone fireplace at The Edge Hotel, Lyons Falls, on Friday surrounded by representatives from various law enforcement agencies, the county, landowners and snowmobiling clubs and associations to encourage snowmobilers to sled responsibly and to take safety in their own hands. Julie Abbass/Watertown Daily Times 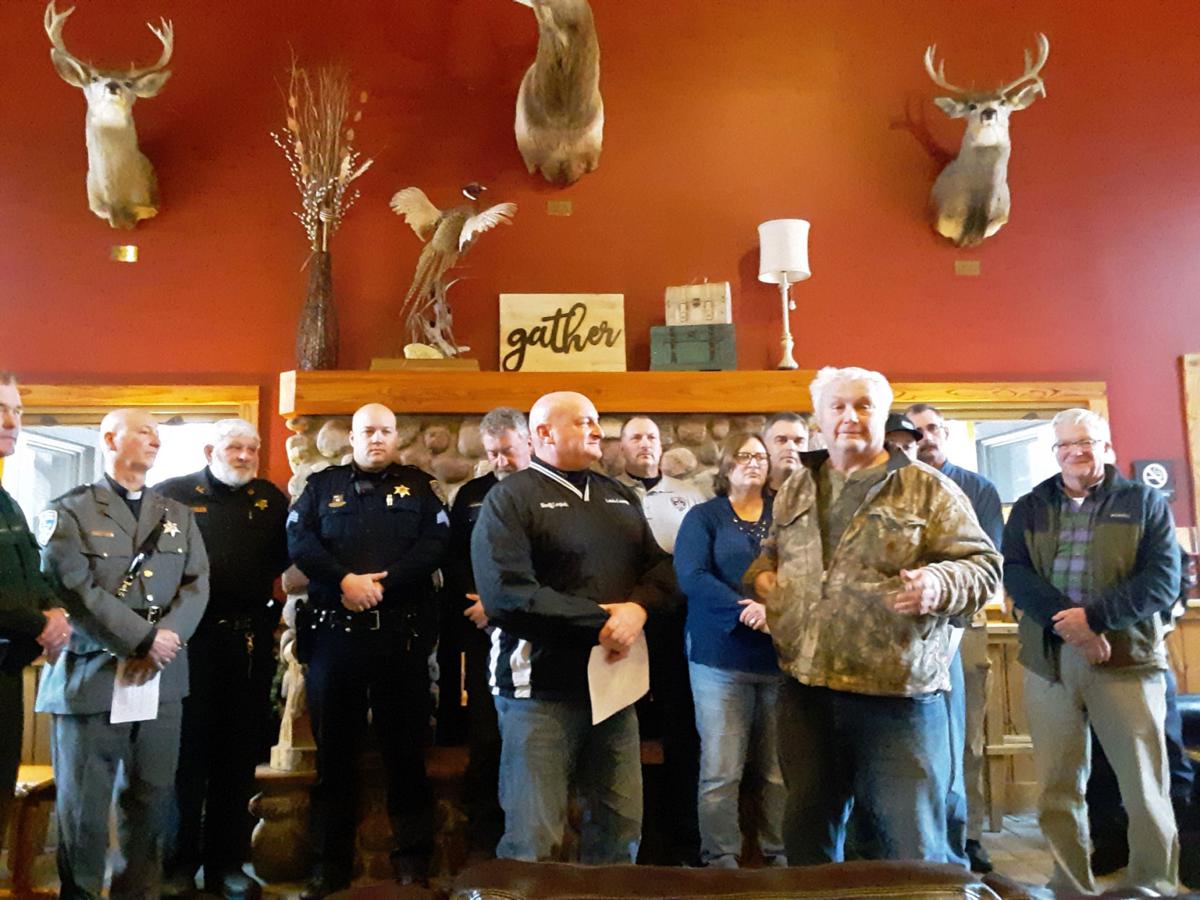 Kicking off the 2020 snowmobile season, Lewis County Sheriff Michael Carpinelli stood in front of the stone fireplace at The Edge Hotel, Lyons Falls, on Friday surrounded by representatives from various law enforcement agencies, the county, landowners and snowmobiling clubs and associations to encourage snowmobilers to sled responsibly and to take safety in their own hands. Julie Abbass/Watertown Daily Times

In his annual address marking the kick-off of the snowmobiling season, Sheriff Michael Carpinelli stood in front of the stone fireplace at The Edge Hotel, Lyons Falls, surrounded by representatives from various law enforcement agencies, the county, landowners and snowmobiling clubs and associations.

“We’ll be out there again enforcing the speed limits, checking the registrations, making sure the insurance and proper equipment are there, but I want to put the safety part back on the rider to take their own personal accountability and be responsible for each other.” Mr. Carpinelli said,

He asked riders to do their part to reduce sledding-related deaths by policing themselves.

The sheriff encouraged sledders to offer rides to those who have had too much to drink before they get on their snowmobiles to drive. He also asked bartenders to respectfully refuse to serve snowmobile drivers before they’ve had too much.

County board Chairman Lawrence Dolhof welcomed sledders to the area and encouraged them to have fun but added, “Our only request is that you play it safe and keep the speed under control when you’re here.”

In addition to slowing down, State Snowmobile Association Trail Coordinator Jim Rolf asked sledders to stay on the right side of trails at all times and “between the stakes” marking the trails on private lands because to do otherwise is not only disrespectful to landowners, it’s also a misdemeanor crime.

Dairy farmer Gary Rosiczkowski, who is one of those landowners, said in addition to trespassing outside trail markers, riders often go on trails closed for lack of snow.

“We close the trails and people go right around the sign, go right through the hay fields, spin their tracks and have a good time. It upsets the landowners,” Mr. Rosiczkowski said.

Snowmobile clubs are responsible for grooming the trails on Tug Hill, as in many places, and Chris Skipper, president of the Turin Ridge Riders club, asked riders to constantly be on the lookout for groomers, “even when you think they might not be around” and to give them the right of way.

“In a battle of size, the groomer will win over a snowmobile so please, expect them. Ride right, ride safe, ride in control and ride like a pro,” Mr. Skipper said.

For Mr. Rolf, although snowmobiling is important to the local economy, it needs to be safe snowmobiling to really benefit the area.

“I don’t know how many businesses support this, but I’m going to state it right now. If you are a snowmobiler who comes here, jeopardizes our trails, breaks the law by jeopardizing other snowmobilers’ safety, we don’t need you here. We don’t want you here. Stay on your own property,” Mr. Rolf said, “These trails have got to be safe for our families and everybody else that’s out there.”

Wrapping up the event, Sheriff Carpinelli said, “The main message is, we want you to come to our area, enjoy our businesses, our fine food, the great snow that we get, but we want you to come here and do it safely. We’d like you to be respectful and look out for other riders.”

According to information provided by the snowmobile unit of the state Office of Parks, Recreation and Historical Preservation, the main causes of snowmobile accidents and deaths are running into inanimate objects, like trees, when travelling at high rates of speed and the influence of alcohol.

Kicking off the 2020 snowmobile season at The Edge Hotel, dairy farmer Gary Rosiczkowski, a landowner that allows trails on his property, spoke of sledders that ignore closed trails signs and damage the land with their machines. The gathering of law enforcement and other organization representatives was focused on safety, encouraging snowmobilers to take responsibility for their actions by slowing down, not drinking before driving and staying on the trails. Julie Abbass/Watertown Daily Times

"He asked riders to do their part to reduce sledding-related deaths by policing themselves.".... seriously? good luck with that... as long as the trails run from bar to bar,running sleds capable of 100+ MPH...driven by guys... with very little law enforcement around.. it'll continue... Put moguls/speed bumps on the trails...cameras... increase fines/penalties for speeding...and dwi's..