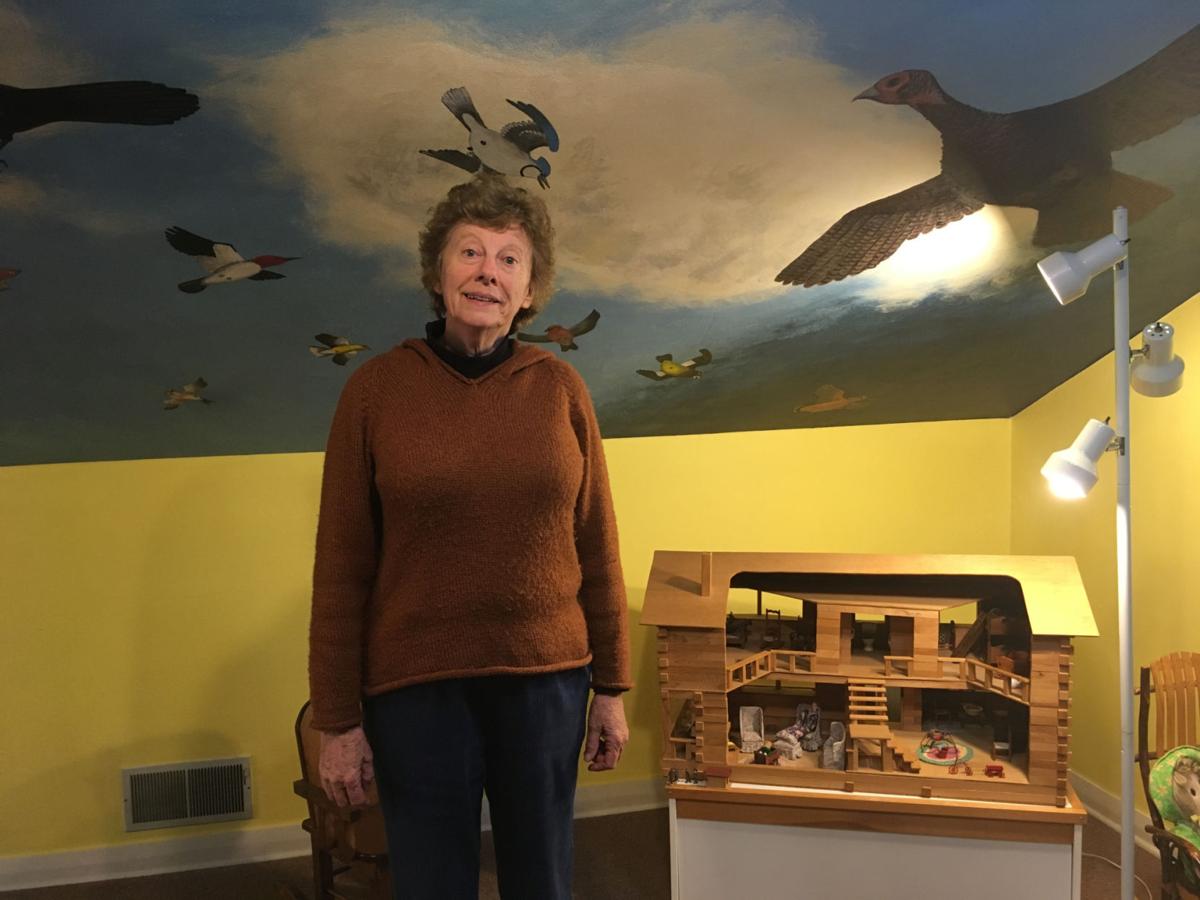 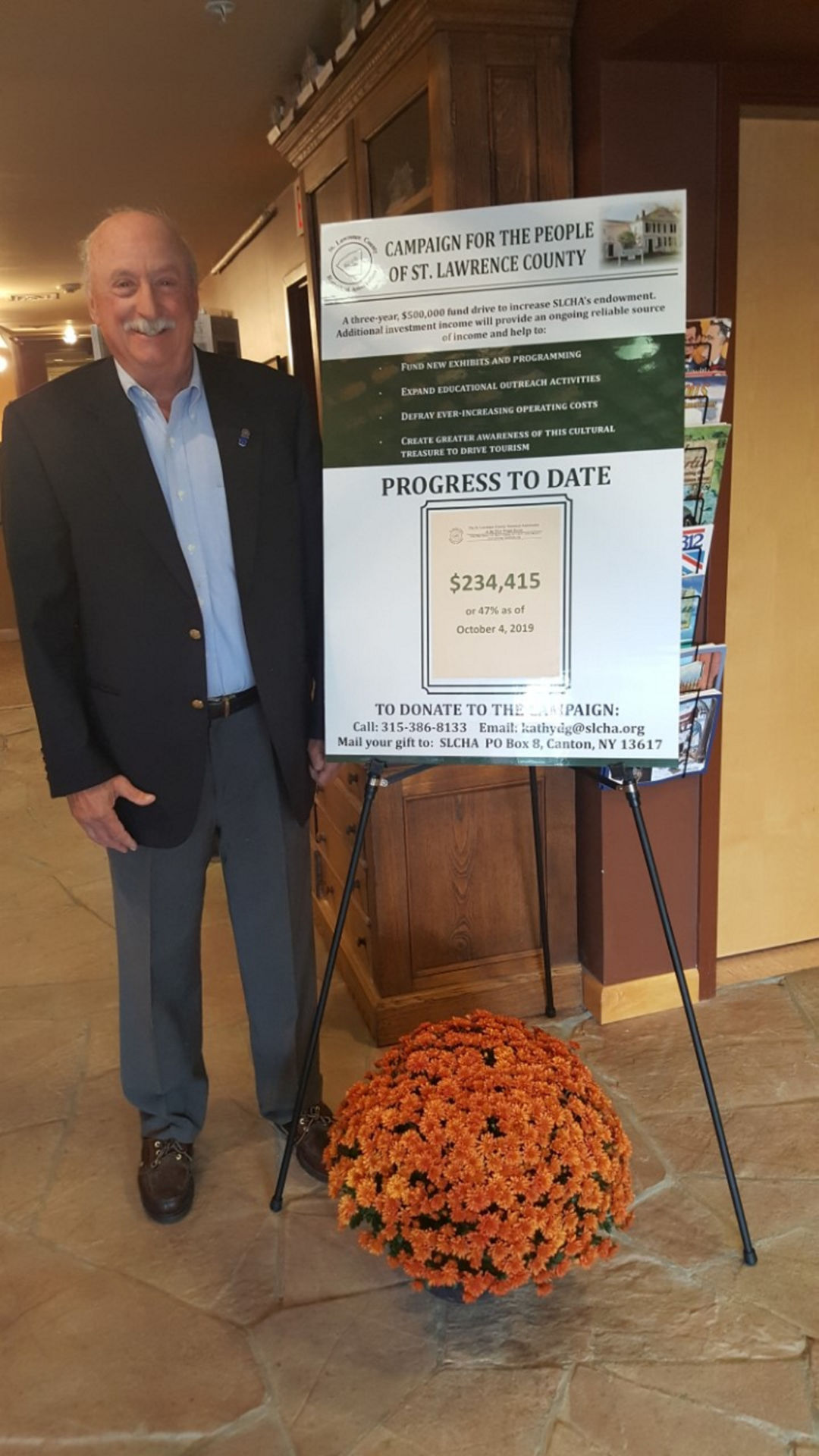 Lance Rudiger, president of the St. Lawrence County Historical Association’s Board of Directors, poses next to a display about the organization’s $500,000 capital campaign. Provided photo

Lance Rudiger, president of the St. Lawrence County Historical Association’s Board of Directors, poses next to a display about the organization’s $500,000 capital campaign. Provided photo

CANTON — A $500,000 capital campaign has been launched by the St. Lawrence County Historical Association to help the agency expand programs, install more exhibits at the Silas Wright House Museum and better secure the organization’s future.

The three-year campaign, “Campaign for the People of St. Lawrence County,” started quietly in February and has so far raised $234,415 in pledges and gifts, about 47 percent of the goal, said Kathy Del Guidice, campaign coordinator.

“To have raised almost a quarter of a million dollars in the north country in eight months is very surprising and rewarding,” Ms. Del Guidice said. “People have been incredibly generous, but of course we have a long way to go to reach $500,000.”

This is the association’s first major fund drive in 20 years and it was marked by a kick-off reception Oct. 4 at the Silas Wright House, 3 E. Main St.

Cash gifts in the first eight months totaled $72,001, which is 120 percent of the $60,000 cash goal set in February by the association’s Board of Trustees.

“Museums aren’t what they used to be at all,” Ms. Merrill said. “We want to have more interactive things for visitors to touch.”

The association’s director, Lance W. Rudiger, said the campaign is a bold endeavor to ensure that SLCHA meets its goals.

“We wish to better serve the region with more exhibits, exciting educational and informative programs, interesting presentations like the Brown Bag Series, and quality publications like the Quarterly and Silas Wright House Newsletter. Our archives are easily accessible. New projects such as our church tours and county-wide ‘talk and walk series,’ which are being well received, will be expanded,” he said.

The first major contributor to the fund drive was the Northern New York Community Foundation, Watertown. It pledged a matching grant of $25,000 when the campaign reaches the $250,000 milestone, which SLCHA hopes to do before year’s end. All funds will be deposited in the SLCHA endowment held by NNYCF.

“We are pleased to support a campaign for an organization that has an impact across St. Lawrence County in a way that helps bring our two organizations closer together to strengthen the awareness, appreciation and preservation of the region’s history for this generation and the next,” Rande Richardson, NNYCF executive director, said in a prepared statement.

Ms. Del Guidice said NuMed for Children, a company in Hopkinton, has donated $25,000. NuMed is a leading manufacturer of angioplasty and valvuloplasty catheters for children.

The Children’s Attic has been named the NuMed for Children’s Attic. It is an area on the second floor of SLCHA that includes old-fashioned clothes in which children can dress-up, play with the doll house, or make crafts.

Founded in Hopkinton in 1984 by Allen Tower Sr., NuMed’s products help children around the world with congenital heart defects. Today, NuMed for Children is under the leadership of the founder’s son, CEO Allen Tower Jr.

In an email Mr. Tower said, “On behalf of all past and present NuMed employees, we have been fortunate enough to help children around the world with the work we do, so it’s nice to have a chance to help the children of the north country by working with your organization and helping kids understand the history of the area. We hope this will last for many generations and are happy to have been a part of the great work you’re doing.”

The Sweetgrass Foundation, Canton, also pledged $25,000 to the fund drive on the condition that 100 percent of SLCHA board members participate in the effort. This challenge has been met with 18 board members contributing $72,125. These funds will increase the endowment held by NNYCF.

Allan Newell and Kate Newell, trustees of the Sweetgrass Foundation, said the foundation’s gift to the endowment campaign is an investment in its future and they believe it will help ensure the important work of preserving the remarkable history of St. Lawrence County for future generations to come.”

St. Lawrence Health System made its first-year gift of $5,000 toward a three-year $15,000 pledge in June. April Grant, executive director of SLHS Foundation, attended the kick off reception.

“History is rich in the north country,” Mr. Wilson said. “We are extremely privileged to be living in an area that appreciates the value our past provides to us,” he said. “We are pleased to provide this contribution in assisting the St. Lawrence Historical Association on capitalizing on that point. We are partnering with the Historical Association by heightening their ability to attract new members to the museum and the robust programs it offers.”

“Support to date has been very encouraging. People understand the need to protect the only nonprofit organization in the county dedicated to collecting, preserving, interpreting and exhibiting the history of St. Lawrence County. It is an important resource for residents, tourists, and community groups, whether for viewing exhibits, attending educational programs, doing genealogical research, or for groups seeking meeting space,” she said.

Donations to the campaign in any amount are welcome. For more information, contact Ms. Del Guidice at kathdg@slcha.org or 315-386-8133.

The St. Lawrence County Historical Association is a membership organization open to anyone interested in St. Lawrence County history. For more information, or to become a member, call the SLCHA at 315-386-8133 or e-mail at info@slcha.org. Exhibits and programs are made possible, in part, with public funds from the New York State Council on the Arts with the support of Gov. Andrew Cuomo and the state Legislature.

The St. Lawrence County Historical Association at the Silas Wright House is open 10 a.m. to 4 p.m. Tuesday to Saturday and from 10 a.m. to 6 p.m. Friday. Admission to the museum is free. Admission to the archives is free for members and children, $2.50 for college students, and $5 for the general public.