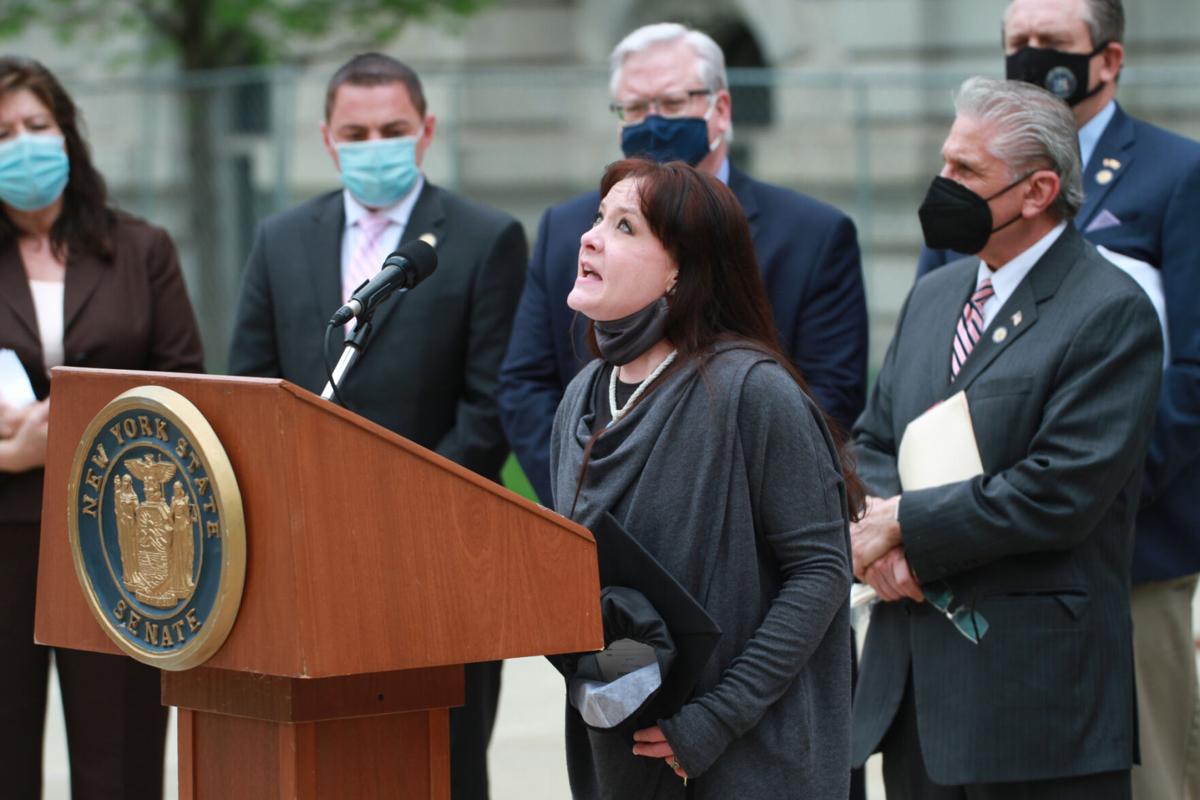 Kelly Hadley, of Wingdale spoke Tuesday in West Capitol Park in Albany about how she stopped receiving unemployment benefits in February due to a fraudulent claim in her name. Courtesy of the Senate Minority Conference 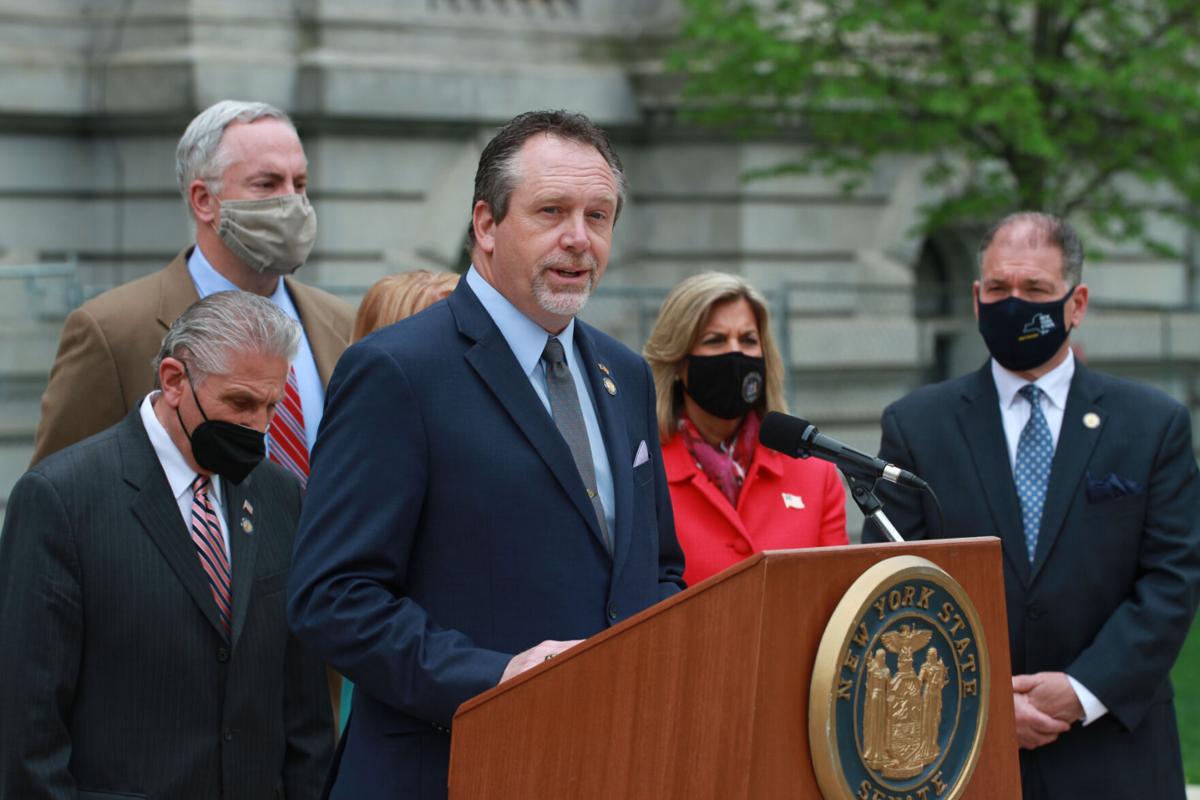 Kelly Hadley, of Wingdale spoke Tuesday in West Capitol Park in Albany about how she stopped receiving unemployment benefits in February due to a fraudulent claim in her name. Courtesy of the Senate Minority Conference

New York has responded to 724,000 identity-theft related unemployment fraud cases to date in 2021 — already close to double its rate for all of 2020, according to the state Labor Department on Tuesday.

The state reports 394,000 cases of identity-theft related unemployment fraud in 2020, up drastically due to the pandemic from 93 in 2019 and 30 in 2018. The figures do not include instances of other types of “soft” fraud, according to the department.

“These fraud numbers include the identity theft numbers because during the pandemic, that’s mostly what we’re seeing are these large fraud rings,” state labor Department Director of Communications Deanna Cohen said Tuesday. “In previous years, the soft fraud would be really what we’re seeing, or people who are collecting while working, etc. Those numbers [during the pandemic] would be pretty low.”

More than 4.6 million New Yorkers have filed completed unemployment insurance applications since the start of the coronavirus pandemic in early March 2020, providing more than $81.3 billion in benefits, according to the department Tuesday.

The state has identified over 1.1 million fraudulent unemployment benefit claims during the COVID-19 pandemic, preventing fraudsters from stealing more than $12.3 billion in benefits, according to DOL.

Department representatives and state executives continue to decline to give an updated figure of the amount the state has paid in benefits after falsified applications.

“We cannot give you a specific number as to the amount of monies paid or recovered as new fraud is being identified every day AND we continue to recover more and more of the funds that were paid to fraudsters,” Cohen said in a statement Tuesday. “These recoveries can take months, but we are committed to clawing back as much money as we can.”

Senate Republicans cited up to a $10 billion state deficit in unemployment insurance on Tuesday afternoon in West Capitol Park, calling on colleagues in the Legislature and Gov. Andrew Cuomo’s administration to fix a multitude of technical issues plaguing the state’s unemployment system.

The Senate Minority conference proposed measures to require a complete, forensic audit of the state’s IT systems to identify weaknesses, to strengthen the digital infrastructure to avoid future issues and an accurate measure from the state Labor Department of potential fraud and the agency’s efforts to contain it.

“Over a year into the pandemic and I still hear from constituents who are shut out by an ineffective, failing unemployment system,” Sen. Peter Oberacker, R-Schenevus, said Tuesday. “Additionally, many who never applied for assistance are now the victims of fraud. Individuals and families hanging on by a thread are not receiving crucial help, and crooks are taking advantage of a shoddy, vulnerable network. Along with providing immediate assistance to those currently suffering, we must reinforce the overall effectiveness and security of our unemployment system — which is what my legislation and these Senate Republican initiatives will accomplish.”

Kelly Hadley, of Wingdale, in Dutchess County, recounted the issues with her locked unemployment benefit account in front of the Capitol steps Tuesday.

“My account’s been locked, my Social Security number dumped into a disabled account and then I get phone call after phone call,” she said. “... I can’t tell you how many times I’ve been told ‘We found your information! Your funds will be released!’ Lies after lies. False hope — broken promises. It’s been two months, two weeks to date that I haven’t seen anything.

“I implore that the Department of Labor fix this immediately and I implore the governor to help us.”

Representatives from Gov. Andrew Cuomo’s office referred requests for comment on unemployment issues and all questions to the state Labor Department.

Mike Fraser, a spokesman with the Assembly Minority conference, was also recently a victim of unemployment fraud.

Fraser received a letter in the mail containing a bank card notifying him of his state unemployment benefits, he recalled Tuesday.

“It was an obvious mistake, but demonstrates the widespread fraud that’s out there,” Fraser said in a statement. “My situation is hardly an isolated incident, but no one knows exactly how much fraud has taken place. The real victims are the people still waiting for their benefits to arrive while money is being sent to the wrong places.”

Fraser called the Labor Department, but said he was never connected to a person. The department later issued a form letter the case was being handled and he may be contacted by police about the incident.

Assembly Minority Leader Will Barclay’s office has received a recent uptick in calls from constituents about complaints of unemployment fraud or payment issues, Fraser said.

Every state lawmaker, including congressional representatives, were flooded with calls from people who could not get through to the state Labor Department in the early days of the pandemic and through most of last spring.

The number of pandemic-related state and national unemployment claims continue to decline amid record attempts at fraud.

The state boasts 16,840 fewer weekly claims for the week ending April 17 — the second-largest decrease of all U.S. states, according to the federal department.

“There is no comparison from where we were a year ago to where we are today,” Cohen said, adding the majority of claims are processed within three weeks. “Those claims that have not yet been completed are extremely complex. Every state’s unemployment system has been tested and pushed to the limits during this crisis, but in New York we have moved mountains to connect more than 4.6 million New Yorkers with over $81.3 billion in benefits while launching a new Google-backed application, updating our phone system, increasing communication with New Yorkers and instituting new federal programs before other states. Throughout this process, the DOL has worked very closely with our legislators on both sides of the aisle to address the needs and concerns of our fellow New Yorkers. In addition, we have thoroughly reevaluated best practices to better serve New Yorkers, we learned how to better communicate with customers in real time across multiple platforms, and we continue to make improvements and do what it takes to serve New Yorkers in need and to protect the lifeline of their benefits.”

The nation’s insured unemployment rate was a flat 2.6% the week of April 17, according to the department.

New York had the nation’s fourth-highest insured unemployment rate at 4.6%, according to the U.S. Department of Labor, behind Nevada at 5.9%, Connecticut at 5.3% and a rate of 4.9% in Alaska.

Correction: Due to a reporter's error, an earlier version of this story misrepresented the number of identity-related fraudulent claims filed as dollar amounts lost to fraud.

Nothing new here, after all you’re talking about NY.