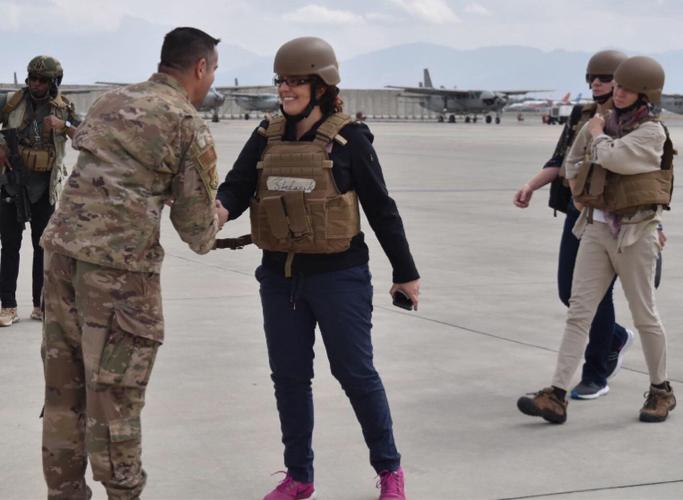 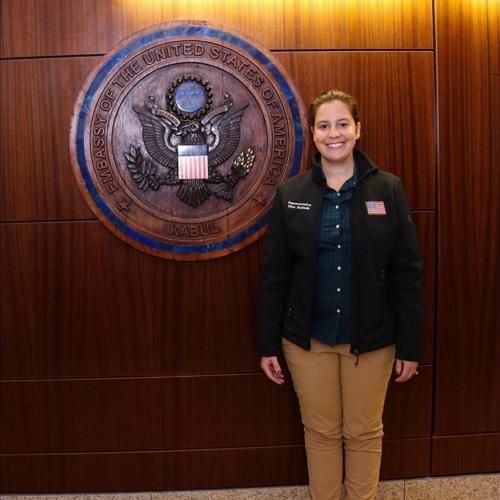 Rep. Elise Stefanik poses at the Embassy of the United States of America in Kabul. Provided photo

Rep. Elise Stefanik poses at the Embassy of the United States of America in Kabul. Provided photo

Ms. Stefanik, R-Schuylerville, returned on Sunday from a week-long trip to the Middle East taken with four Democratic members of Congress. The congressional delegation didn’t expect the Trump Administration would announce on Sunday its endorsement of Turkey’s military operation into Northern Syria. The operation would likely remove American-backed Kurdish forces near the border with Syria. The Kurdish forces, known as Syrian Democratic Forces, or S.D.F,, are currently guarding 11,000 imprisoned ISIS fighters. The prospect of Turkey moving into the region could risk the escape of those ISIS fighters, the statement said.

“Not only will this decision further destabilize the region,” the joint statement said, “it will make it more difficult for the United States to recruit allies and partners to defeat terrorist groups like ISIS.”

As the only Republican member of Congress attached to the joint statement, Ms. Stefanik said weighing the potential political consequence of disagreeing with the president is not how she approaches the job.

“I have been a very independent member of Congress since I was sworn into office,” Ms. Stefanik said in a phone interview. “I ran to represent this district and I have very strongly held views on national security.”

As a member of the House Armed Forces, Foreign Affairs and Intelligence Committees, Ms. Stefanik has advocated for increased defense spending and strengthened relationships with allies and partners. She has taken four trips to the Middle East since being sworn in, and she puts representing the 10th Mountain Division in Fort Drum above all.

“When you represent the most deployed unit in the U.S. Army since 9/11, these issues impact families in my district in a very personal way,” she said. “This is one of other issues where I have disagreed with the president.”

The congressional delegation called for the Administration to work with the same U.S. leaders, diplomats and intelligence officers they met with to develop a long-term strategy for countering the terrorist threat in Syria. The strategy, Ms. Stefanik said, should be based on military leaders in the region who understand how important it is to partner with Kurdish forces.

“I think, going back to the Obama years, when [Syria President Bashar al-Assad] was allowed to cross the red line by using chemical weapons and there was not an appropriate U.S. response, that was deeply concerning,” Stefanik said. “I don’t think we’ve ever had a comprehensive Syria strategy and we’ve let countries like Russia fill the void as they propped up Assad.”

As for Afghanistan, Stefanik co-sponsored a bill in April called the “Ensuring a Safe Afghanistan Act,” which would keep 10,000 U.S. troops in the country for the next year. She still supports the bill after visiting Afghanistan. She maintains that Afghan security forces “need to be at the tip of the spear,” with American troops remaining in a training and advisory role.

“While I know some policy makers’ inclination is to talk about withdrawal,” Ms. Stefanik said, “I don’t support that because, coming from New York state, I do not want to see a safe haven for terrorist groups, and there are over 20 terrorist groups that have geographic presence in Afghanistan.”

Ms. Stefanik said the withdrawal of U.S. troops from Afghanistan should be conditions-based as the country’s security forces continue to progress.

“If you consider the amount of U.S. boots on the ground today versus a few years ago when you were at 147,000, that’s a significant decrease,” she said. “And yet we’ve been able to continue to train the Afghans to maintain the security of their own country, which is the long-term goal.”

Ms. Stefanik’s trip to the Middle East comes after peace talks between the U.S. government and the Taliban have stopped, around two weeks ago. Those talks, which have not resumed, have been criticized by Ms. Stefanik, with her saying the only democratically-elected government in the country did not participate in the talks.

“I think it would have to be a new direction with the Afghan democratically-elected government having a seat at the table, negotiating with the Taliban,” she said.

Let's be real -- Stefanik doesn't really have an opinion. She just follows through with what she is told to do. Her sights are firmly set for "better things" than to serve her country or her district.

Wrong again boys! Ukrainian government officials tried to help Hillary Clinton and undermine Trump by publicly questioning his fitness for office. They also disseminated documents implicating a top Trump aide in corruption and suggested they were investigating the matter, only to back away after the election. And they helped Clinton’s allies research damaging information on Trump and his advisers, a Politico investigation found.

Stefanik is an embarrassment.

Soooo pulling out of Syria is “catastrophic blow to our national security interests.”....yet asking Russia, China, and Ukraine to engage in our election isn't...go figure... I guess she doesn't have his "great and unmatched wisdom"... God help us..

the rule is that it's ok for hostile foreign powers to attack our elections so long as they do so to republicans' benefit.

Will the next generation in the U.S. fare financially better or worse than this one?