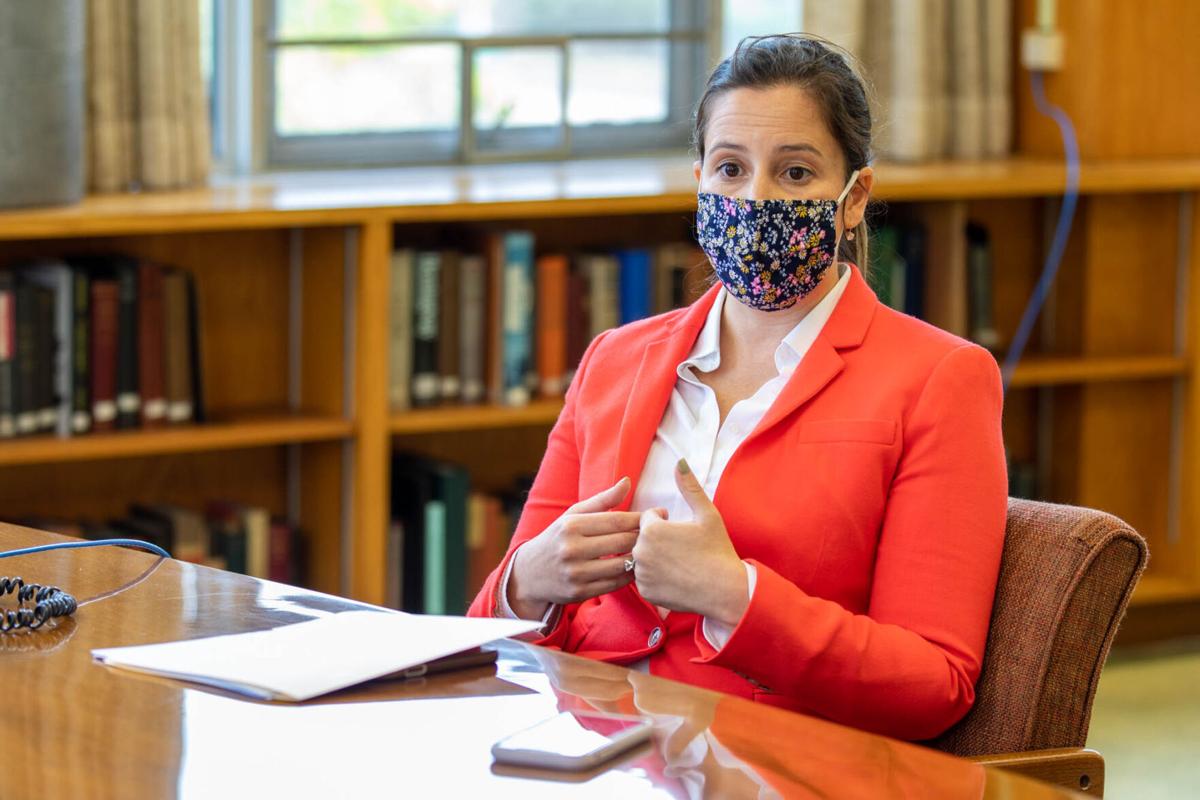 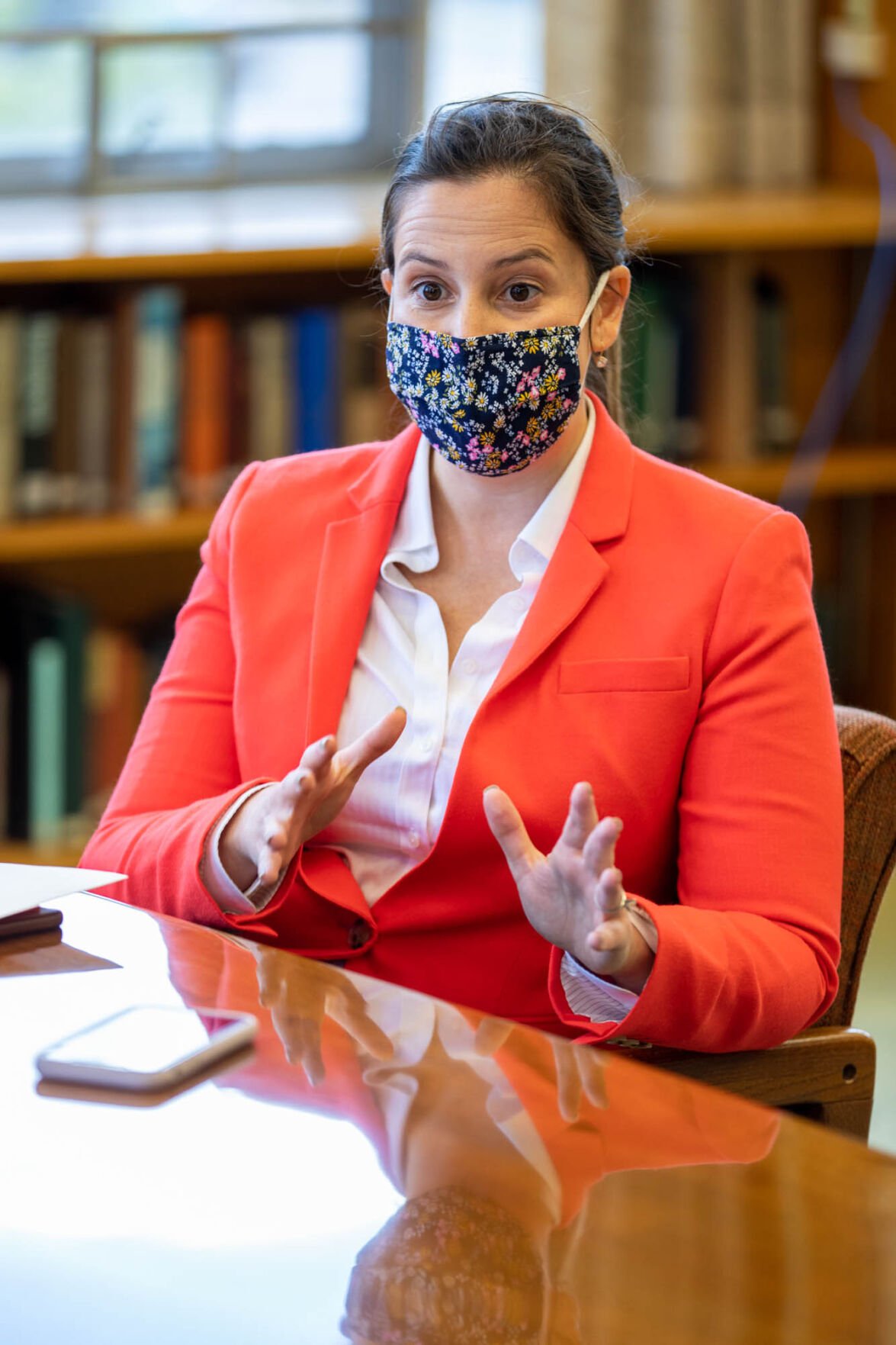 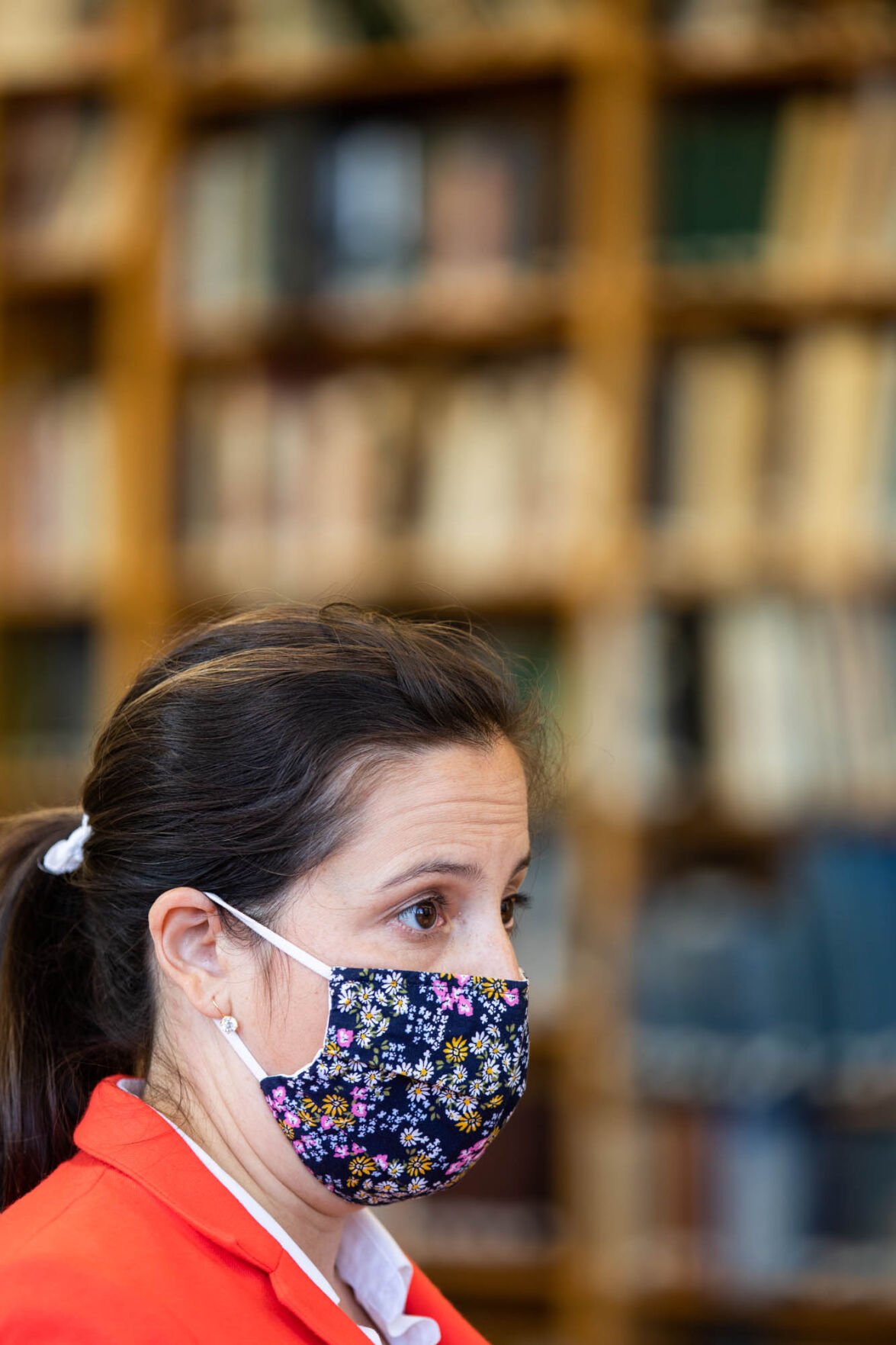 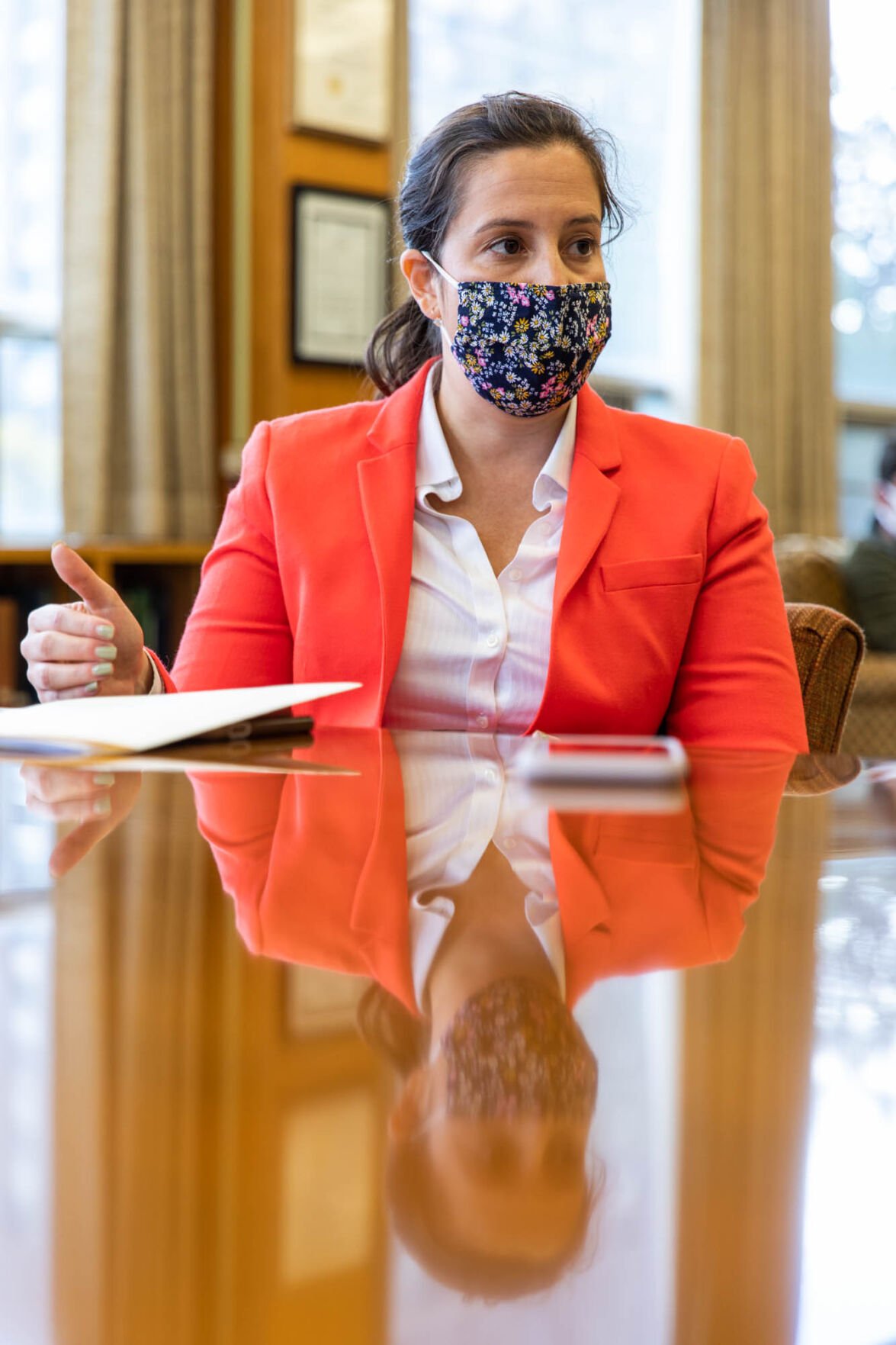 The congresswoman, who is running for her fourth term in office, spoke with the Watertown Daily Times editorial board on Thursday about how her short-term legislative priorities have shifted in light of the COVID-19 pandemic, as well as her long-term goals in office.

In 2014, at the age of 30, Rep. Stefanik became the youngest woman in United States history to ever be elected to Congress. She’s now 36 years old and remains the youngest GOP woman to have earned a seat in Congress.

She currently serves as a member of the Armed Services Committee, the Committee on Education and Labor and the House Permanent Select Committee on Intelligence.

“This is my sixth year in office, my third term, and a once-in-100-years pandemic,” she said. “The needs have been very different this year, compared to any other year I’ve served. My focus has been providing COVID relief and results to stakeholders in the community, to organizations that really needed it and making sure that we have very individualized constituent services.”

Rep. Stefanik said since the pandemic began in March, she’s focused specifically on shoring up north country hospitals and healthcare centers. Specifically for Watertown, Rep. Stefanik highlighted her work alongside the U.S. Department of Health and Human Services, rewriting its formula used to delineate funding for rural hospitals and working to have the department reclassify Samaritan Medical Center as a rural hospital, resulting in millions of dollars in additional aid for the health service.

“(Samaritan) was designated as urban,” she said. “We know that is not an accurate description of the base in Jefferson County that they serve.”

Rep. Stefanik said between the formula rewrite and the reclassification of the hospital as a rural care center, the hospital was made eligible and received additional funding in federal coronavirus aid. She said that goes along with other pushes she has been a part of in Washington to improve and expand necessary federal support during the pandemic.

Rep. Stefanik also talked about the Paycheck Protection Program, a federal loan and grant program authorized in the CARES Act. The program initially set aside $350 billion to be loaned to small- and mid-sized businesses struggling to cover payroll for their employees as the coronavirus pandemic and subsequent shutdowns nearly halted the American economy. The program included a number of provisions that allow companies that took out PPP loans to have them forgiven, essentially turning the loan into a grant.

The congresswoman said she believes businesses should be able to apply for a second round of PPP money, and it should be easier for a business to have its loan forgiven.

“I signed, it’s called a discharge petition, it’s a legislative vehicle on the House floor to force a vote to continue funding (the PPP) for small businesses and to provide a second round; that needs to be in the next relief package,” Rep. Stefanik said.

She said she unequivocally believes there needs to be another round of coronavirus aid legislation, and has been disappointed in the failure of leadership, in both the Republican and Democratic parties, to get a new aid package passed.

She’s criticized the two most recent aid packages to receive a vote in the House, the HEROES Act and its successor, dubbed HEROES 2.0. Both bills were Democrat-led measures. Rep. Stefanik joined with almost all of her Republican colleagues to vote no on both, saying they were not sufficiently bipartisan and far too expensive.

“I’ve been part of a group of members that have urged and pushed for us to just come to a bipartisan agreement,” Rep. Stefanik said. “The first three COVID relief bills were almost unanimous, and that is the model that we have to get done.”

Rep. Stefanik said she believes the next set of coronavirus aid legislation should focus on things both parties are in agreement on, which include funding for state and local governments, as well as K-12 school districts; additional funding for coronavirus testing; financial support for hospitals; targeted stimulus checks; and a renew of the PPP.

“We agree on those aspects; that would be a pretty robust relief bill, and that is what they should move through,” she said.

She said she understands all the federal spending being done to combat the pandemic comes at a significant cost, but she said this is a point where the investments must be made, and she’s confident the costs can be made up.

“I believe this is a once-in-a-century pandemic, and this is an opportunity to make those important investments to make sure this doesn’t happen again, and to improve our readiness, improve bio-defense,” she said.

Rep. Stefanik acknowledged her generation is going to be the one to inherit the immense federal deficit, but she believes Republican leadership can balance the budget through careful management and balanced budgeting. She said the path that’s been taken in the past to address large governmental deficits — allowing inflation rates to increase rapidly — are not an option because of the significant negative impact it would have on average American.

Rep. Stefanik also spoke about her long-term legislative goals during Thursday’s interview. She said she continues to focus on improving broadband infrastructure in the district, something that’s been on the radar for years in the north country, but has become especially important as more people than ever before work and learn from home.

“Rural broadband needs to be treated like a utility, and it needs to be on every last mile,” she said. “We’ve made progress. If you look at maps when I first took office, compared to today, it is more built out, but we have a long way to go.”

Rep. Stefanik said she continues to focus on employment issues as well. She said she’s seen improvement in unemployment numbers on average this year, but obviously the COVID pandemic has hurt those improvements in the short term.

“On jobs numbers, we need to continue to work to safely recover, particularly for our tourist-based economy and northern border businesses as well,” she said.

Rep. Stefanik said in the long term, she’s primarily focused on workforce development, getting workers in the north country prepared and educated to work in today’s more complex jobs.

She said she’s seen a significant amount of interaction between BOCES, local community colleges, universities and employers in the region, where educational providers are engaging with industry leaders to create a path to employment.

“If you think about SUNY Canton and their programs with local hospitals, you think about Clarkson (University) and their commitment to employers in the region, and you have the Advanced Manufacturing Institute in Plattsburgh, which started while I’ve been in office; we’ve worked with them all,” Rep. Stefanik said.

Rep. Stefanik also spoke about her plans for healthcare in a long-term sense. While the congresswoman has joined with her Republican colleagues in voting to repeal the Affordable Care Act, also known as Obamacare, on Thursday she highlighted her efforts to amend the bill.

“I’ve advocated for fixes to the Affordable Care Act,” she said. “One of the biggest fixes that was signed into law by President (Barack) Obama was the repeal of the auto enrollment mandate. That was a bill that I introduced and was signed into law as part of an appropriations package.”

Rep. Stefanik has a number of priorities for any replacement of the ACA and has supported repealing and replacing the bill for most of her time in Washington. She said she wants the replacement to include protections for people with pre-existing conditions, provisions allowing for young people to stay on their parents insurance plans until the age of 26 and assurances that small businesses will be able to purchase affordable associated health insurance plans. She also said any replacement must allow the purchase of an insurance plan across state lines.

“Another way to get at overall healthcare costs is to make sure that we have incentives for preventative healthcare, and people are not waiting to go to the doctor until there’s an emergency,” she said.

Overall, Rep. Stefanik said she’s running on her “record of results” as a bipartisan member of Congress who has legislated from the minority and the majority and continued to keep an ear out in her home district.

“I’ve worked with President Obama, I’ve worked with President (Donald) Trump, I’ve been in a Republican majority, I’ve been in a Democrat majority, and when it comes to results for this district, from funding infrastructure grants, helping in the effort to save Fort Drum, reinvesting through the NDAA to bring back important wins for this community, I’m proud of that record and I’m running on that record,” she said.

Is Alex Gault surreptitiously suggesting that Elise's results are not results by putting it in quotes in the title? Or was this an editorial move?

Reporters often aren’t the people who write headlines. This is usually done by a copy editor, designer or one of the news editors.

It has quotation marks around it because it's the exact language spoken by Elise Stefanik.

Find it in the article, too.